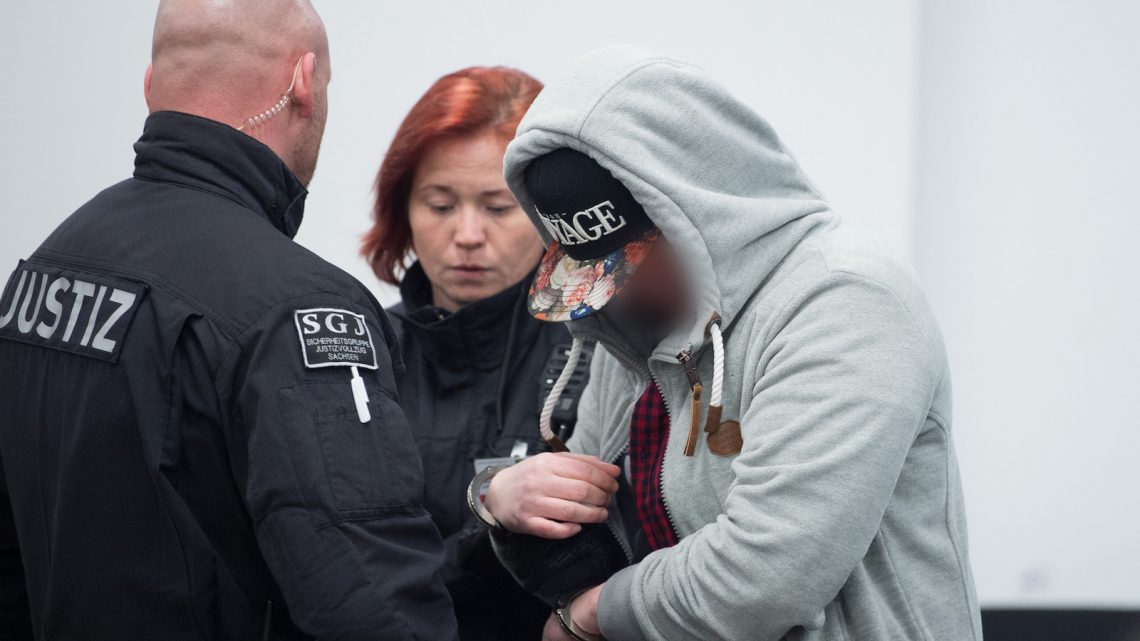 Four alleged supporters of a German far-right terrorist group went on trial in a Dresden court Monday, on charges stemming from a sinister bombing campaign intended to drive out refugees.

The accused – three men aged 27, 31 and 53, and a 31-year old-woman – are charged with being members or supporters of the so-called “Freital Group”, a right-wing extremist terror group that carried out a string of bombings targeting refugee accommodation and left-wing political opponents in the sleepy east German town of Freital in 2015.

The group formed in 2015, drawing its membership from a fiery protest movement that had arisen against migrants being housed in the Saxon town during the height of Europe’s refugee crisis. Vigilantes from the movement then formed a “citizen’s patrol” group to police the behavior of the refugees, before some took more extreme action with a secret terror campaign, often meeting in plain sight in the forecourt of a local gas station and organizing on a private chat group.

READ: A lit fuse: How a far-right terror group unleashed something sinister in a German town

While no one was killed, the attacks created shockwaves in Germany, drawing national attention to the rising tide of right-wing extremism that has engulfed the country since Chancellor Angela Merkel’s decision to open the country’s borders to about a million asylum seekers during the height of the migration crisis.

In 2018, eight members of the group were convicted for crimes including forming a terror group and attempted murder, receiving sentences of between four to ten years. Prosecutors say the four currently on trial in the regional superior court in Dresden comprise a “second tier” of offenders.

The 27-year-old accused of being a member of the group has been charged with aiding and abetting attempted murder for his role in an attack on an asylum seeker's apartment, by obtaining the explosive in the neighboring Czech Republic, and igniting the bomb, which injured a Syrian asylum seeker.

He and the 53-year-old – who are both charged with membership of a terrorist organization – are also accused of having carried out an attack on the office of a left-wing party two months earlier.

The two 31-year-olds accused are considered to have been supporters of the group. The man played a role in an attack that blew up the car of a local left-wing councilman, while the woman is accused of throwing an illegal Hitler salute in a photo taken with the group.

Michael Richter, the councilman whose Volkswagen Polo was blown up outside his house as he slept, previously told VICE News that while he had escaped unharmed, he had been forced to leave Freital in the aftermath of the bombings, due to continuing harassment from the group’s sympathizers and fears he could be targeted again.

Robert Lüdecke, spokesman for German far-right monitoring group the Amadeu Antonio Foundation, told VICE News that his organization welcomed the new trial, which reflected the growing seriousness with which German prosecutors were treating political violence from the far-right.

He said that after last year’s political assassination of pro-refugee mayor Walter Lübcke in the city of Kassel, allegedly by a far-right extremist, it was clear that violent political crimes like those of the Freital Group could happen “everywhere and all the time.”

READ: Germany’s Far-Right Is Fired Up After Its Fantasy Almost Came True

At the time of the attacks, regional politicians had been at pains to downplay the offending as the impulsive acts of a few hotheads, rather than terrorism. The far-right Alternative for Germany (AfD) party is still the most powerful group on Freital’s town council; one of the accused is a former employee of the local party chief, who in 2015 had pushed for protests outside the homes of refugees.

“Much earlier than in the past, the Federal Public Prosecutor's Office is prepared to intervene directly and take legal action if it becomes apparent that actions and plans are aimed at the politically motivated killing of people,” said Lüdecke.

He said that the Freital Group adhered to the “murderous tradition” of other German far-right terror groups which had sprung up out of racist, populist movements and swiftly moved on to political violence.

“Anyone who supports such groups, knows of plans for attacks or participates in planning such attacks must be punished with the full force of the law, if only to deter other potential perpetrators,” he said.

California Becomes a Furnace as Wildfires Rage Out of Control