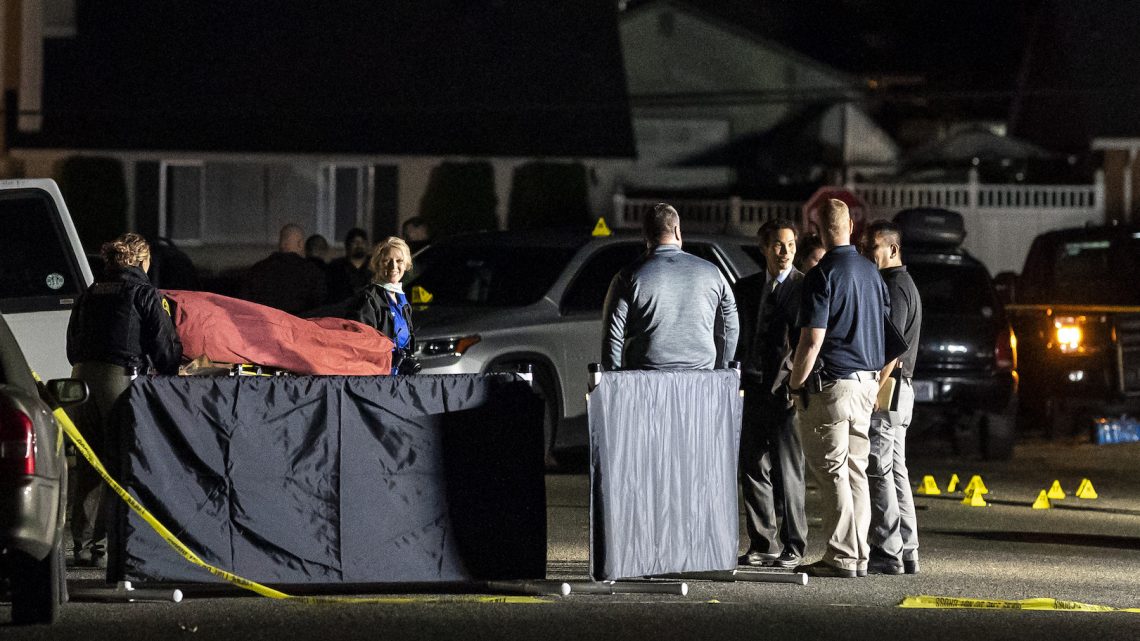 Two different police jurisdictions involved in the killing of Michael Forest Reinoehl late Thursday are giving divergent accounts of how it happened — and a third account, from a bystander, is fueling rumors on the left and the right. It’s also being picked up by media outlets across the country.

The official account from the Thurston County Sheriff’s Department in Washington state is that Reinoehl, a self-described antifa activist, was running away when he was shot dead by officers with the “Fugitive Task Force.”

Meanwhile, the U.S. Marshals leading the task force said they “attempted to peacefully arrest Reinoehl” and only shot him when he “produced a firearm, threatening the lives of law enforcement officers.”

“Task force members responded to the threat and struck the suspect, who was pronounced dead at the scene,” they asserted in a statement. No officers were harmed.

In the absence of a cohesive narrative from the authorities, wild eyewitness accounts are gaining steam. Neighbors Chase Cutler and Chad Smith told the Olympian newspaper that they were working on cars in the area when they saw several unmarked SUVs pull up to the suspect, who was in his car.

“The man got out of his vehicle and began to fire what they believe was an assault rifle at the SUVs,” the Olympian reported. “They said they heard 40 or 50 shots, then officers returned fire, hitting the man.” “It reminded me of a video game,” Cutler told the outlet. Neither he nor Smith responded to VICE News’ request for comment.

This alternate narrative describing “40 to 50” shots has shaped conversation about the shooting on the right — and has even made its way into headlines in the New York Post and Daily Mail.

A Chad Smith quoted in the Seattle Times gave a totally different version of events than the one he (or another Chad Smith) had given the Olympian. (A public records search of men named Chad Smith in Lacey, Washington, returned 31 options).

Chad Smith told the Seattle Times that he was eating dinner outside when a car “accelerated down the street and turned abruptly into an apartment complex.”

Smith told the Seattle Times that he and two other men went to go see what had happened, and then heard what he described as “bursts of semi-automatic fire.” Then, he said, he saw the suspect get out of his car, pull out his gun, and start shooting at officers. “At that point the suspect was shooting and walking backwards,” Smith told the Seattle times. Officers fired back more, he said. The entire shooting was about a minute to a minute and a half long.

“I thought it was fireworks”

Jashon Spencer, who describes himself as a resident of the area, posted a graphic video of the aftermath showing a man — presumably Reinoehl — lying on the ground as someone attempts to give him CPR. “I think he’s dead — yeah, I think he’s dead, for real,” Spencer says on the video. “I was sitting in my backyard when all I heard was, ‘pop, pop, pop, pop, pop….I thought it was fireworks at first.”

Later he pans the camera down. “See all those yellow markings? Those are bullets — they let loose on him,” he says.

“See all those yellow markings? Those are bullets — they let loose on him.”

The Thurston County Sheriff’s Department, citing the ongoing investigation, declined to say definitively whether Reinoehl discharged or brandished his weapon. However, they confirmed to VICE News that he had a handgun on his person — not a rifle.

Rumors and conflicting accounts are also circulating on leftist social media. For example, Resistance Media, which has nearly 69,000 followers on Facebook, wrote: “witnesses reported 2 SUVs pull up beside Michael and immediately fired 30 to 40 shots into his vehicle.”

Despite the ongoing investigation into the shooting, and scant details about what actually happened, Attorney General Bill Barr is claiming Thursday’s events as a victory for law enforcement. “The tracking down of Reinoehl — a dangerous fugitive, admitted Antifa member, and suspected murderer — is a significant accomplishment in the ongoing effort to restore law and order to Portland and other cities,” he said in a statement.

Reinoehl, a 43-year-old father of two, was hiding out at an apartment complex in Lacey, Washington, about 120 miles north of Portland, and had been on the run since he was named as a suspect in the shooting and killing of a far-right protester during a rally last weekend. In a conversation with a local freelancer published by VICE News, Reinoehl appeared to confess to the crime and claimed he’d acted in self-defense. The interview aired on VICE TV on Thursday night.

U.S. Marshals were looking for Reinoehl at the request of the Portland Police Department, who’d issued a warrant for his arrest earlier Thursday.

His death at the hands of police — and the conflicting narratives — comes at a particularly charged moment for Portland, and the country as a whole. Reinoehl had been a regular presence at the protests that have raged through Portland for more than 90 consecutive days, since the May 25 death of George Floyd in Minneapolis. On Saturday, a caravan of pro-Trump activists drove into downtown Portland to confront protesters. It was during that protest that Reinoehl encountered Aaron Danielson, who’s been described as a supporter of the far-right group Patriot Prayer. In the interview that aired on VICE TV, Reinoehl said he acted in self-defense, though he did not overtly admit to shooting and killing Danielson.

In a DOJ statement, Barr said officers shot and killed Reinoehl when he “attempted to escape arrest and produced a firearm.” “The streets of our cities are safer with this violent agitator removed,” Barr said, “and the actions that led to his location are an unmistakable demonstration that the United States will be governed by law, not violent mobs.”