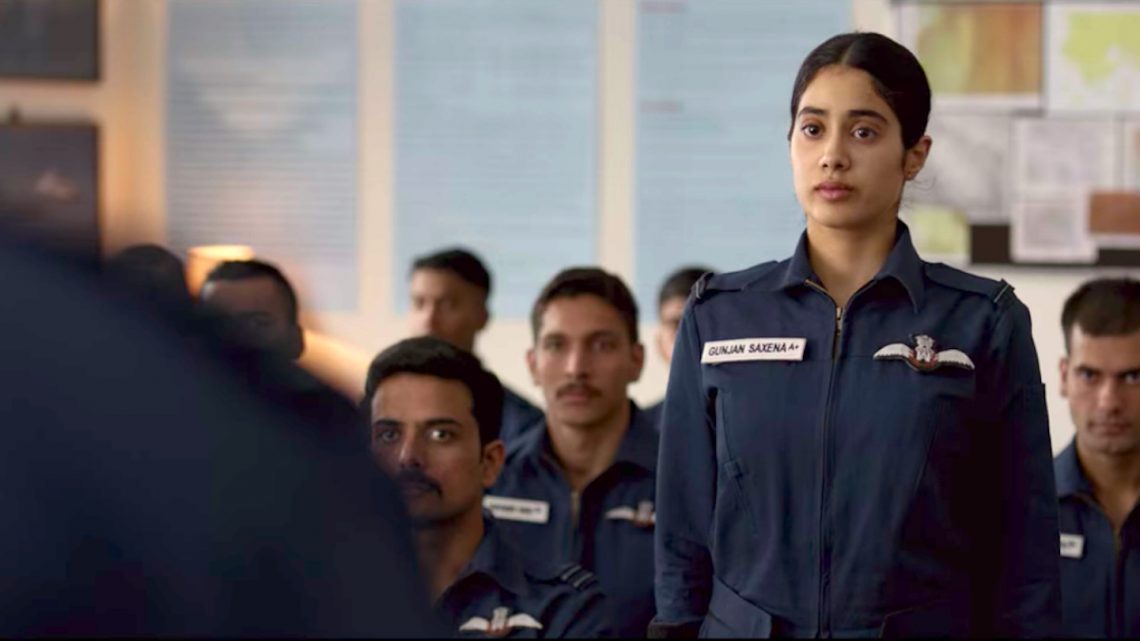 Netflix Has Started a Debate Many Indians Aren’t Ready for: Sexism in the Armed Forces

In India, a Netflix movie has set off a debate around sexism in the armed forces.

The Netflix film, titled Gunjan Saxena: The Kargil Girl, is based on the life of an Indian Air Force (IAF) woman officer, who joined the service in the 90s. Saxena is the first Indian woman to fly in a combat zone.

The film’s scenes depicting male IAF officers refusing Saxena a level-playing field because of her gender, has invited strong criticism.

Upon its release on August 12, the IAF complained that the film portrays them in a negative light. The same week, Rekha Sharma, the chairperson of National Commission of Women (NCW), demanded a ban on the screening of the film. “Officer or not, women always get their due respect in forces,” tweeted Sharma. NCW is a statutory body under the Government of India.

In a letter addressed to the film’s production house Dharma Production, Netflix and the Central Board of Film Certification, the IAF stated, “In the aim to glorify the screen character of 'Ex-Flt Lt Gunjan Saxena', Dharma Productions presented some situations that are misleading and portray an inappropriate work culture especially against women in the IAF.”

In July, the Defence Ministry of the Government of India had made it mandatory for production houses to get a no-objection certificate from them before telecasting any film, documentary or web series on the Indian Army. The reason given was that some production houses are “distorting” the army’s image.

Before the film’s release, the trailer itself received extensive trolling on social media, along with calls for a boycott. One of the film’s producers, Karan Johar, says he was trolled for “insulting” the Air Force. Saxena was unavailable for an interview with VICE News but came out with a statement on August 17, clarifying that the bias was on an individual level, and was not organisational.

“To deny it completely speaks of a feudal mindset and undermines the grit of women officers,” she wrote. “I also combated the difficulties of prejudice and discrimination at the hands of a few individuals for being a woman.”

In 1999, Saxena transported supplies and assisted in surveillance during the Kargil War—an armed conflict between India and Pakistan. The film based on her story is currently trending on number one on Netflix.

Another criticism leveled at Saxena came from her retired course mate, Sreevidya Rajan, who, in a Facebook post, said that the two of them faced “the usual” prejudices but also had some who supported the women. “We had to work harder than our counterparts to prove ourselves to be at par with them,” she wrote. “Some were not happy to share the professional space with us, but a majority accepted.”

She also denied a scene in the film in which Saxena’s character is made to engage in a fist-fight with a male colleague to prove that she is equipped to handle conflict. “We were never ill-treated or humiliated by our fellow officers,” said Rajan.

However, for many Indians, the film’s claims are not so easily dismissed.

In February 2020, the Supreme Court of India ruled that women officers should be given commanding roles and extend permanent service, which are only applicable to men. This would, finally, allow women to get the same promotions, pensions and longer tenures.

The verdict came after the Government of India maintained that women officers are not suitable for command posts since male troops (predominantly from rural India) “are not mentally schooled to accept women officers in command.” It also stated that male and female officers cannot be treated equally because of their different “physical standards and exposures”. That women are limited by the “challenges of confinement, motherhood and childcare.”

Senior advocate Aishwarya Bhati, who represented women officers in this case, told VICE News that the problem of issues such as not having women’s bathrooms or other infrastructure for women—as was depicted in the film—is more “institutional than individual”.

“One of the arguments in the Indian court [in this case] was that the fabric of Indian Army consists of men from rural backgrounds, who will not be able to take command from women because they have that cultural upbringing. That it will cause indiscipline. This is what the establishment understands,” she said. “On the ground, the situation is not like this.

“I have had clients who were denied command positions, but also those where they said people worked with them shoulder-to-shoulder,” said Bhati.

In the past, there have been sexual harassment allegations by women officers against male officers. In 2017, India’s Ministry of Defence revealed that at least a dozen women officers in the armed forces had lodged complaints of harassment and discrimination between 2015 and 2017.

Of these, the Navy had three, the IAF had two, while the Army had six. The number is seen as the tip of the iceberg, considering how low the rates of sexual harassment reporting are in India. There is no consolidated data on gender bias or sexual harassment in the armed forces. A small 2015 survey with 450 Indian Army employees revealed sexism is routine, as is sexual harassment, along with women generally being treated as second-class soldiers.

In August 2019, Army Chief General Bipin Rawat dismissed a Major General—the fourth highest rank in the Indian Army—from service over sexual harassment charges by a female Captain. In another case from 2018, a woman alleged that a senior army officer groped her, and the Indian Army had tried to cover up the case. Most recently, on August 14, the Mumbai police reported that they’re on the lookout for an Army Major accused of rape.

This is not the first time India has dealt with the controversy surrounding the role of women in the armed forces. In 2018, Army chief General Bipin Rawat said that women are not ready for combat roles because they have to raise kids. He also said women would be uncomfortable changing clothes at the frontlines and would accuse men of peeping.

This year, the Indian Army deployed a new paramilitary force called ‘Rifle Women’, near the Line of Control along the India-Pakistan border—reportedly the first time women have been handed internal security and combat duties.