Toronto police are investigating a recent post by one of their Instagram pages in which officers amplified one of Canada’s most recognizable anti-mask conspiracy theorists.

The photo, which was first reported on by CBC News, was posted on an Instagram page called @TPSNeighbourhoodWatch, an account affiliated with the force's 51 Division. It shows two smiling officers flanking Chris Saccoccia, a well-known anti-mask crusader who was recently involved in a series of illegal raves at Toronto’s Cherry Beach in protest of physical distancing. Saccoccia goes by Chris Sky online but has been identified as Chris Saccoccia by the Toronto Sun and Newstalk.

The Toronto Police Service-affiliated account has deleted the photo but the CBC reports that it contained the hashtags #freedomofspeech and #advocate and linked out to Saccoccia’s Instagram account.

Toronto police told VICE News that it is aware of the image and its professional standards unit is reviewing the matter.

In a statement, Lawvin Hadisi, a spokesperson for the mayor's office, told VICE News the city is aware of the Toronto police post.

"One ill-advised social media post is not reflective of the work that all City employees, including our frontline Toronto police officers, have done responding to the pandemic and helping stop the spread of COVID-19,” she said.

In the photo, Saccoccia is wearing a shirt with M.A.D. (Mothers Against Distancing) on it, a group he formed to protest COVID-19 regulations. The photo, posted on Sunday, features an Abraham Lincoln quote and the hashtag #51division, and tags @TPSNeighbourhoodWatch. It is still available on Saccoccia’s account, which has 80,000 followers.

Conspiracy theorists like Saccoccia have seized on the COVID-19 pandemic to boost their profiles and promote a wide range of conspiracy theories. Saccoccia’s exploits typically centre around stunts such as organizing a mask-free ride on Toronto public transit (where masks are mandatory) and handing out fake mask exemption cards. In one video, a maskless Saccoccia forces his way into a grocery store and past a woman working the front door, claiming he has a medical condition. Recently he helped organize anti-social distancing dance parties at Cherry Beach, which serve as after-parties for the weekly anti-lockdown rallies in Queen’s Park.

VICE reached out to Saccoccia for comment on Facebook but did not hear back by the time of publication.

Yellow Vest Canada Exposed is a group that has long been tracking the activities of the far-right, which include COVID-19 conspiracy theorists like Saccoccia. One of its researchers, Tony, who did not want his last name used in fear of retaliation, described Saccoccia as “one of the most prolific” anti-mask campaigners in Canada.

“He needs attention,” he told VICE News. “How else can you describe a man without kids who helms a group called Mothers Against Distancing?”

It appears the photo with the officers may have initially been taken a few weeks ago. Multiple videos posted to Facebook on July 19 show a group of police officers arriving at one of the Cherry Beach raves Saccoccia helped organize. The videos show Saccoccia dealing with the police wearing the same anti-social distancing tank top he is wearing in the photo with cops. Throughout the three videos Saccoccia argues with the police to allow them to continue to play their music. 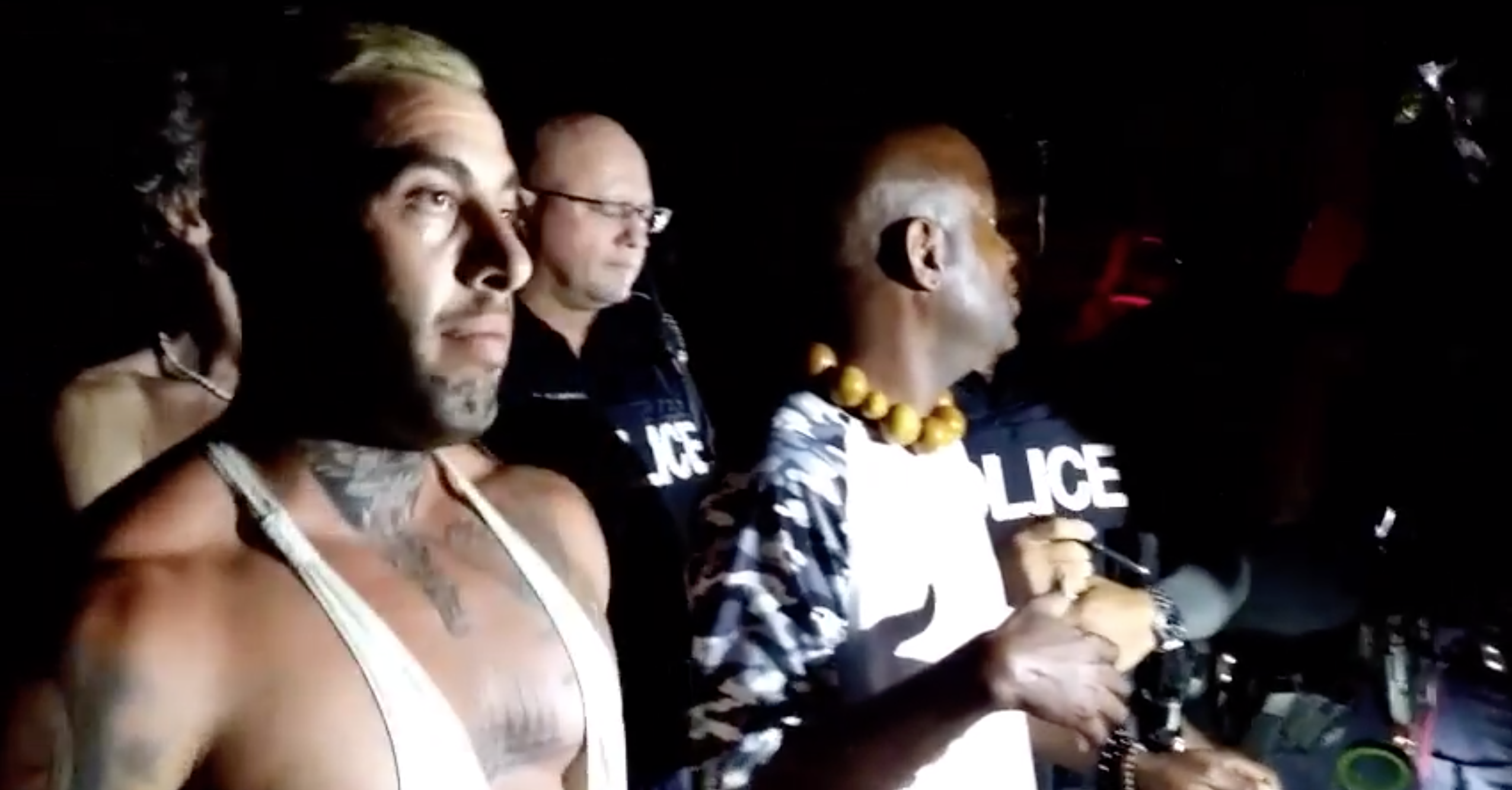 Saccoccia arguing with police in the July 19 Facebook video. Screenshot via Facebook/Ron Banerj

At one point, the party attendees chant “scamdemic” at the officers. After a lengthy argument, the police appear to leave and Saccoccia and his crew continue partying.

In a recent news conference, Toronto Mayor John Tory said he is aware of the Cherry Beach gatherings and will be “keeping an eye on them.”

Brad Ross, spokesman for the City of Toronto, said, “Many attempts to set up DJ equipment at Cherry Beach… have been thwarted over the last several weeks by bylaw enforcement staff, together with Toronto police.

“The City will continue to attend and investigate parties that are clearly in contravention of City bylaws and shut them down and issue tickets as appropriate,” said Ross.

The dance parties aren't the only recent happenings related to Cherry Beach. On Sunday, two men were arrested at the beach after threatening a group of people with chainsaws. The threats and arrest were caught on video. The man who filmed the incident can be seen in the video of Saccoccia’s party calling the anti-mask crusader a “shit disturber.” There is no evidence linking the dance parties with the chainsaw incident.