To understand why the Ultimate Fighting Championship (UFC) decided to spend untold fortunes on an audience-free fight at an Arabian island during a pandemic, you need to understand the company’s president, Dana White. He’s a 51-year-old, Irish Catholic, former amateur boxer from Boston who’s become famous for turning mixed martial arts into a multi-billion dollar business. And for doing whatever he wants.

In this case, Dana wanted to continue putting on fights in 2020, even though by March it was clear that COVID-19 would interrupt the travel plans of his rostered competitors, many of whom live outside the US. To get around this problem, White announced the company would sidestep travel restrictions by temporarily moving their operations to what the company referred to simply as “an international location”.

On June 9, the company revealed they’d enlisted the help of the United Arab Emirates’ government to create an “Eighth Emirate” on Abu Dhabi’s Yas Island. This so-called “Safe Zone” covered a little under half of the 25 square-kilometre island, and would allow them to welcome competitors from all over the world. The dates were set for two weeks, from July 11 until July 25.

To maintain the safety of the event, there were no tickets to so-called “Fight Island”. Nor was there any audience. Yas Island remained totally closed to tourism, and to get there you needed an invitation.

My trip to the island was a result of logistical failings of every major sporting news organisation in Australia. Even though an Australian champion was participating in the fight, no journalists could leave the continent. So, as I was living overseas, I was granted one of only a dozen spots for international media as an Australian representative.

But what the hell would I find there? I packed a bag, curious to find out. 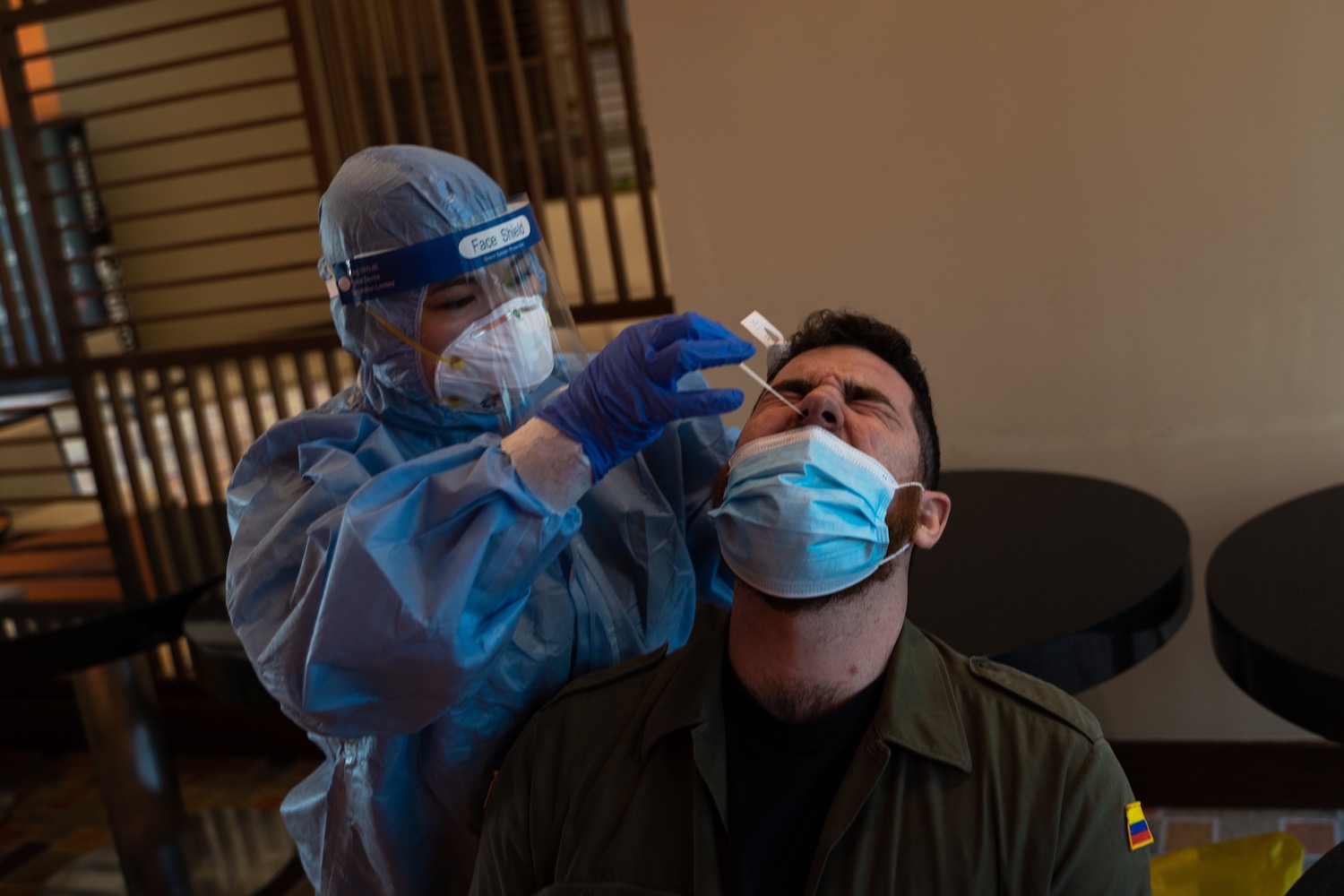 Here I am, getting a COVID test on arrival

Pandemic-era travel means more rules, less planes, and no guarantees I’d leave the tarmac. I arrived at the airport worried, but I soon discovered that an association with Fight Island meant I would be granted certain privileges.

With a negative COVID-19 test and a fit-to-fly certificate, I made my way to check-in where I was prompted for an Abu Dhabi visa, which I didn’t have.

That’s all I needed to say and, with a nod of approval, my economy class ticket was exchanged for business class and my immigration was “taken care of”. 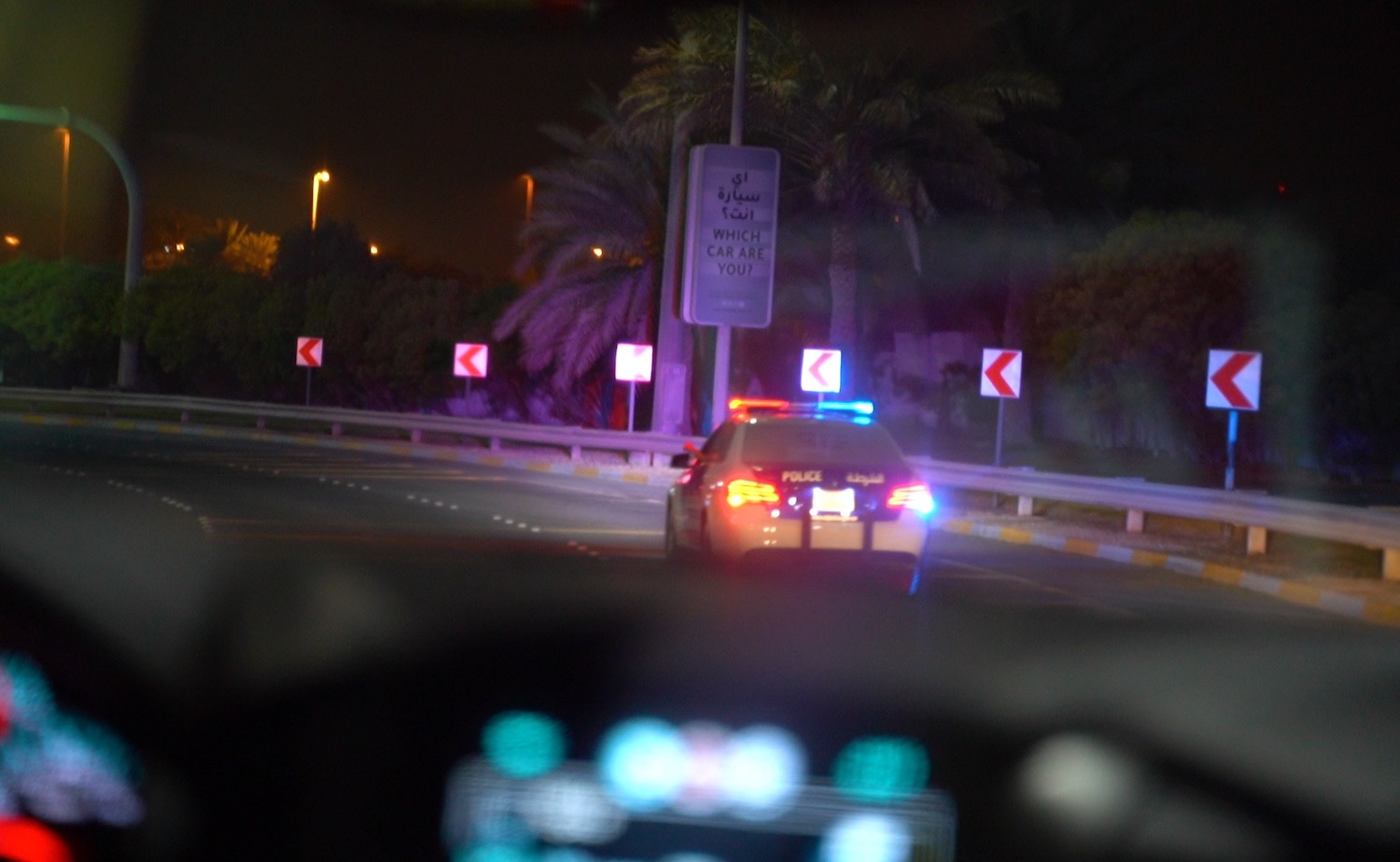 The police escort from airport to the hotel

I enjoyed minor celebrity status among the staff on the plane—word had gotten around that a passenger was going to Fight Island. When I landed a separate bus picked me up, and I was escorted through the back door of immigration, my passport being taken away and returned to me stamped. After “customs” I was herded by airport staff into a black SUV and given a police escort to Yas Island.

On Fight Island, I felt like I’d joined a human colony staging its last stand against the zombie apocalypse. Humanity had to be protected from the outside world, so extreme measures were taken to ensure the virus that brought down civilisation could not enter. Military patrolled the borders of the “safe zone”, while I assumed the main source of entertainment in this strange new world was watching survivors fight one-on-one in a cage.

When the SUV arrived at the hotel, I was instructed to remain in the vehicle. Men in hazmat suits grabbed my luggage to be sterilised and the laser beam of an infrared thermometer appeared on my forehead. Once the men in hazmat suits were satisfied I was taken to my room. 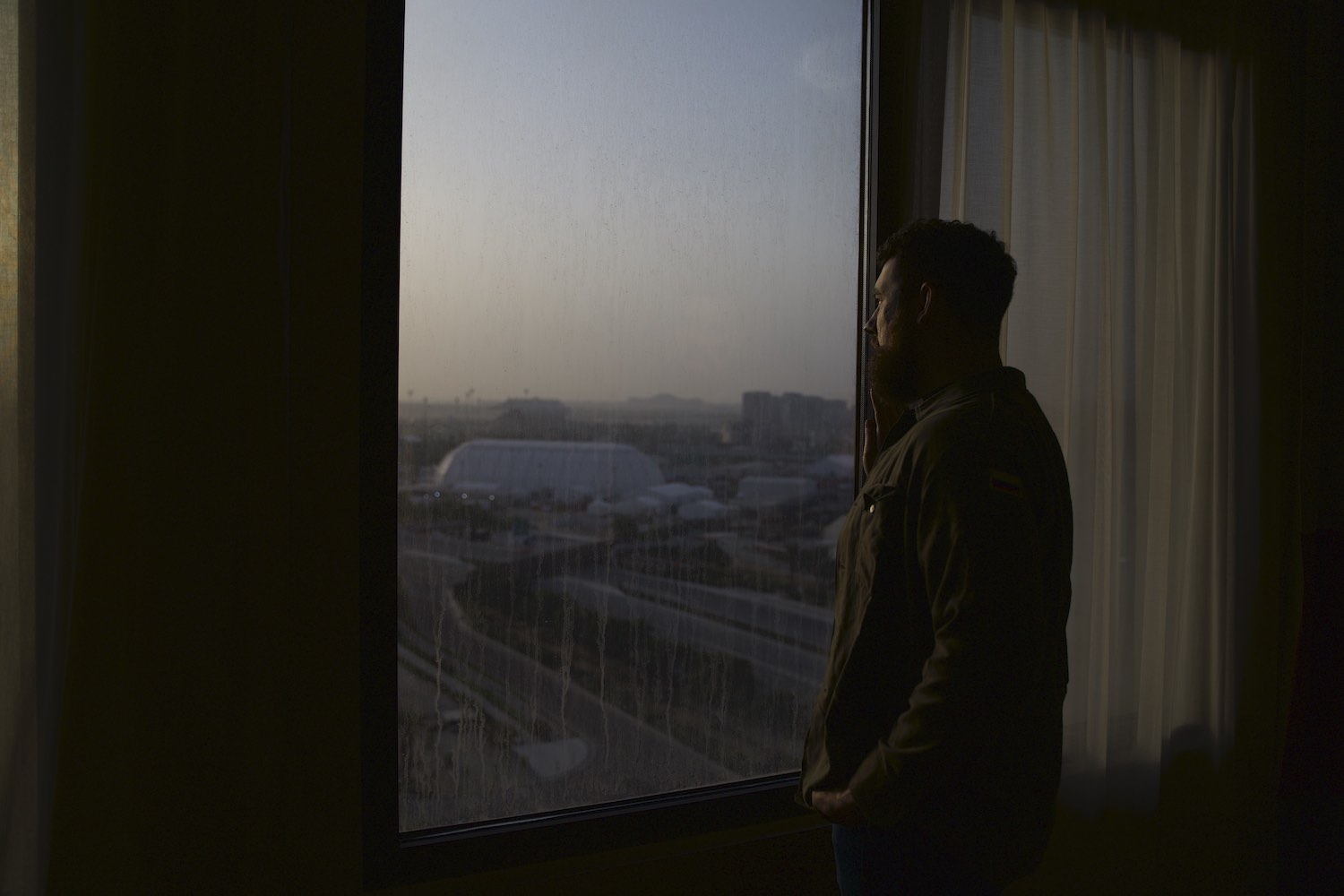 In quarantine at the hotel

Every newcomer to the island was quarantined for 48 hours, leaving only for a brief period each day to receive a COVID-19 test. Once I was cleared, I was free to mix with the guests (event officiators, UFC staff, fighters and journalists) and explore the island.

There was a golf course, an F1/super car racing track, and a beach with jet skis and beach volleyball courts that I was welcome to enjoy in the 47-degree heat. 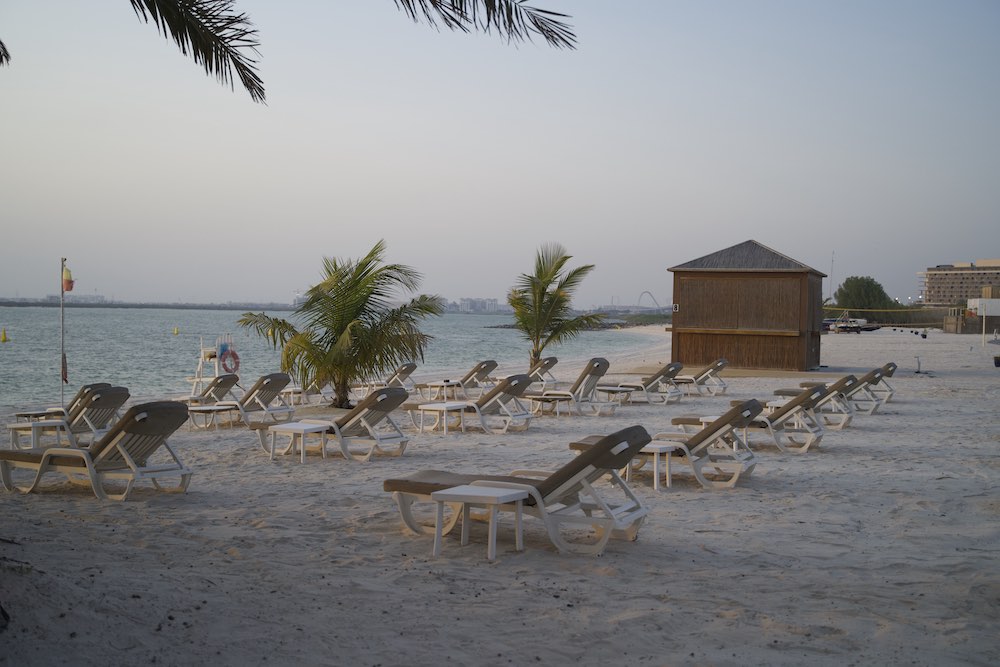 Everything was quiet and deserted

It sounds excessive, but walking around in this odd mix of luxury and relative safety gave me the impression the UAE were using Fight Island as a propaganda exercise. The events, broadcast to the world, were effectively an advertisement for a post-COVID-19 holiday destination, and a PR exercise for the containment capabilities of a country with over 60,000 active cases of COVID (and rising).

It really was nice though. And yet while I’d spent weeks dreaming about it, the competitors had been training their whole lives. Months of disciplined focus meant to sharpen their technique and prepare for their opponents would be on display, and only a handful of journalists and UFC staff were there to see it. 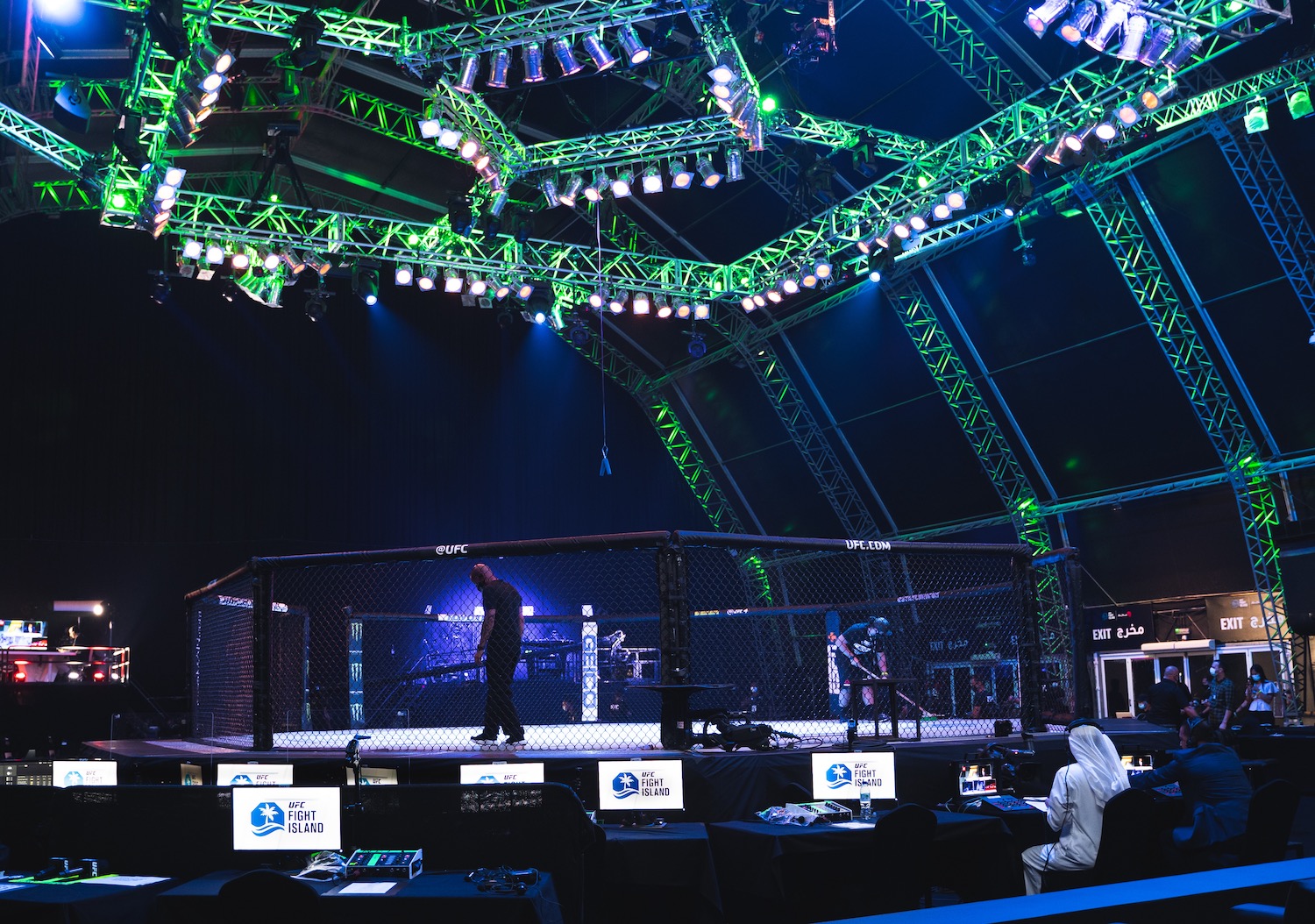 Setting up for the big event

We all packed into a very impressive tent—it wasn’t possible for the competitors to fight outside, even in the early hours of the morning, where the mercury was pushing 37 degrees—and as we set up, the 26 fighters prepared for their matches out of sight, waiting to be called to the Octagon where they would be given the opportunity to prove their martial arts skills superior. 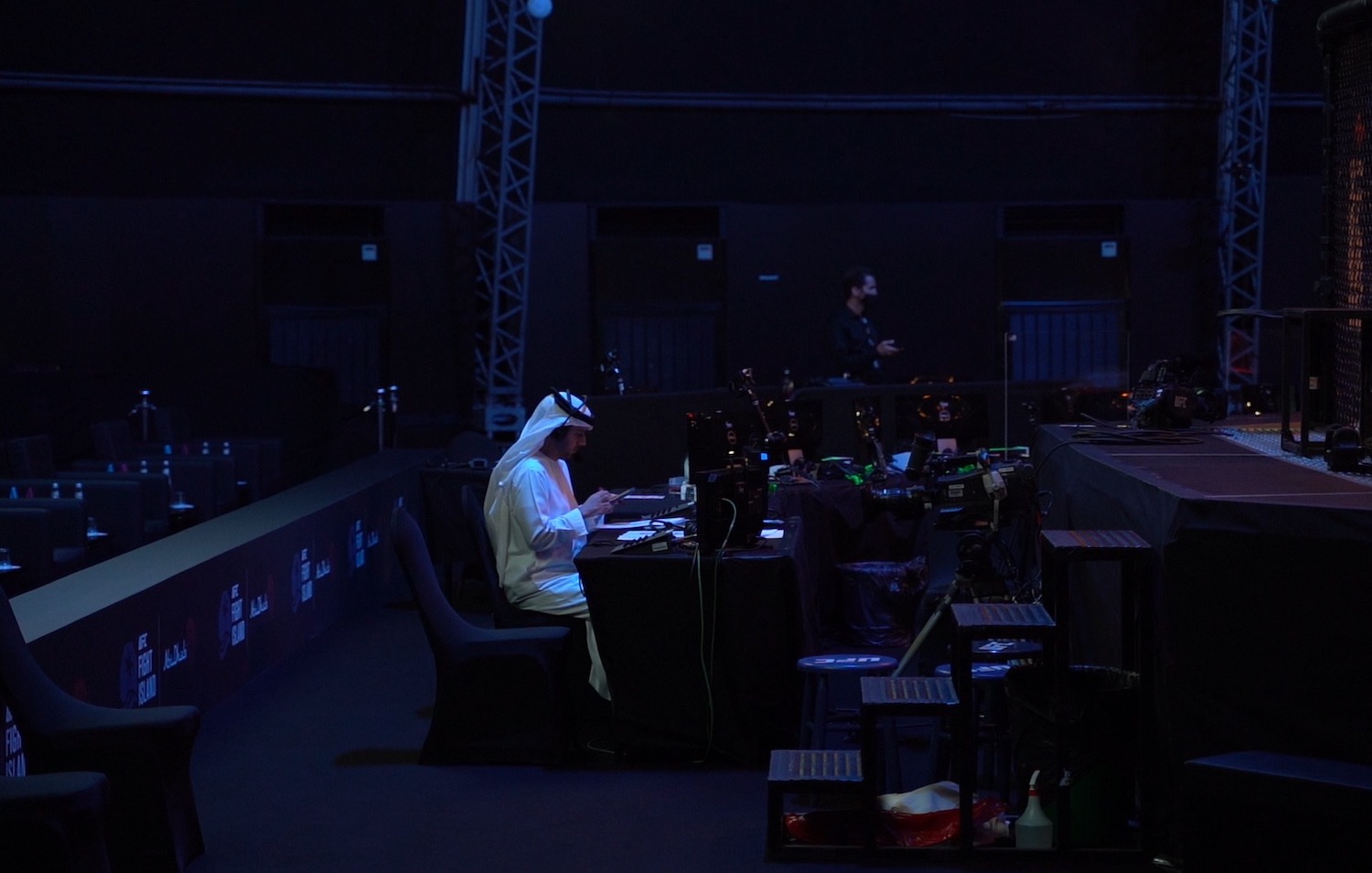 I wasn't allowed to take any photos of the event itself, but this shot is fairly representative of the audience

The event got started with no cheers, no boos, no drunks. This was not sport as we know it. Without a crowd, I could hear every thud of bone on bone; every gasp of air from limbs sinking into flesh. But the knockouts didn’t make a sound—just an eerie silence and a body dropping to the floor while a referee waved both hands to signal that the fight was over.

The impossibility of Fight Island hit me after the second knockout. We were 50 people on a private island in the Middle East watching modern gladiators fight in unarmed combat. How did I get here? I was mesmerised, and each fight merged into the next in a violent ballet. Then it was over. Three world champions had been crowned, and history had been made.

It was 10AM when we all emerged into sunlight, and it was decided that rather than sleep, beers at the hotel bar was more appropriate. 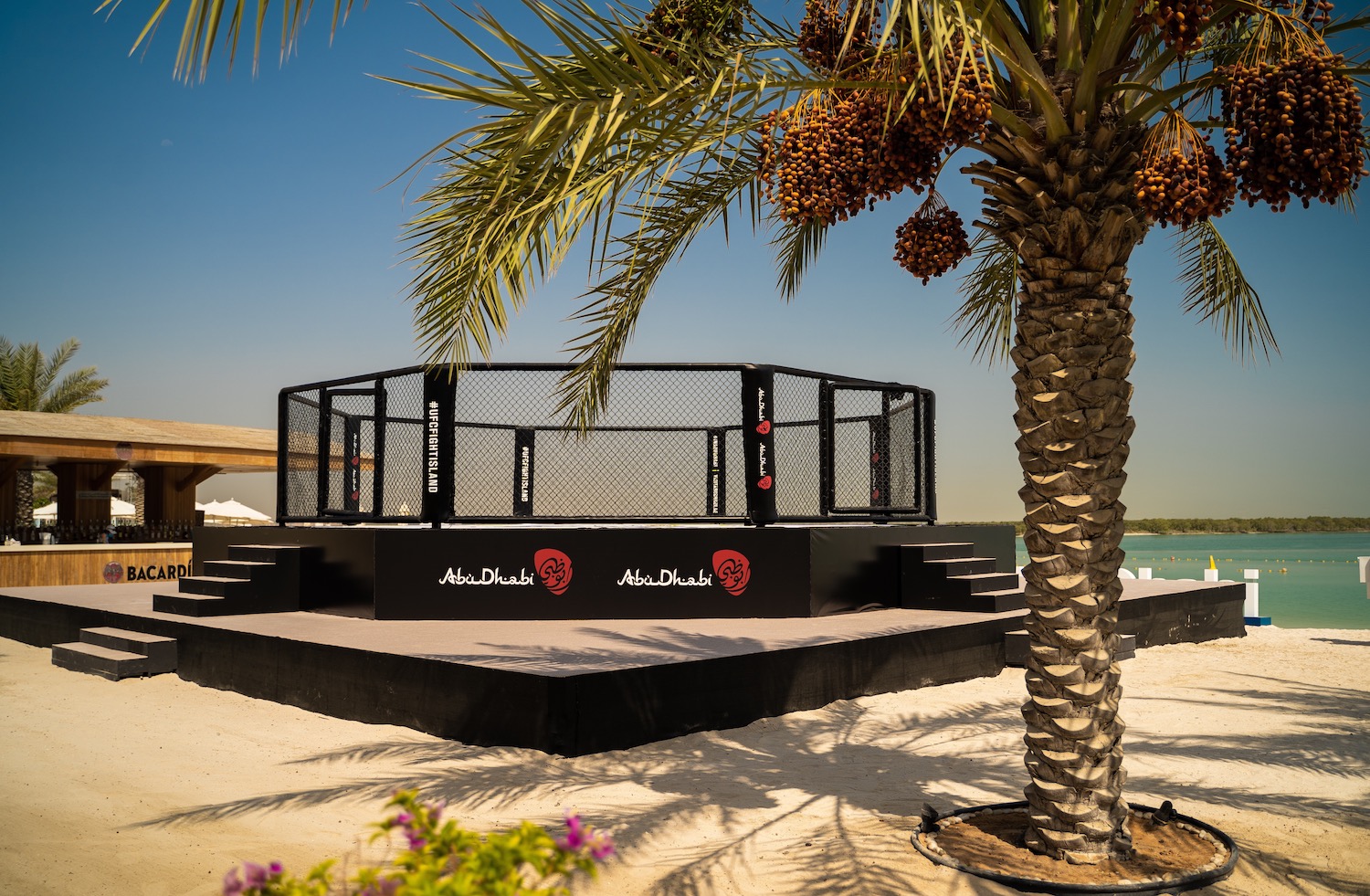 This thing was good for photos

The amount of money that the UFC paid to secure the island, fly hundreds of people to the Middle East, house them, and run events has not been disclosed. No doubt, a partnership with a local government that owns an airline, the island, and the police and military would have lightened the financial load.

Still, in the words of Dana White: “Fight Island is so fucking expensive and so fucking crazy and almost impossible to pull off.” It was a rare event that realistically—given the infrastructure and a certain style of bought-off flexibility from the government—could only happen in a city like Abu Dhabi.

For three weeks there existed a post-COVID-19 world, with a little over 2,000 humans on an island in the desert. A dry run for the end of the world? An advert for UAE? A sweetheart deal for the UFC? Probably a mix of all three. But if a solution to COVID-19 isn’t found in a reasonable amount of time, Fight Island might be the blueprint for how we travel and provide entertainment—at least until the pandemic is over.

I took my luggage back to the black SUV, and we joined a motorcade of other identical vehicles. With police escort we all headed back to Abu Dhabi airport.

My time on Fight Island was over, and after arriving at the airport, an attendant handed me my boarding pass—economy class this time.