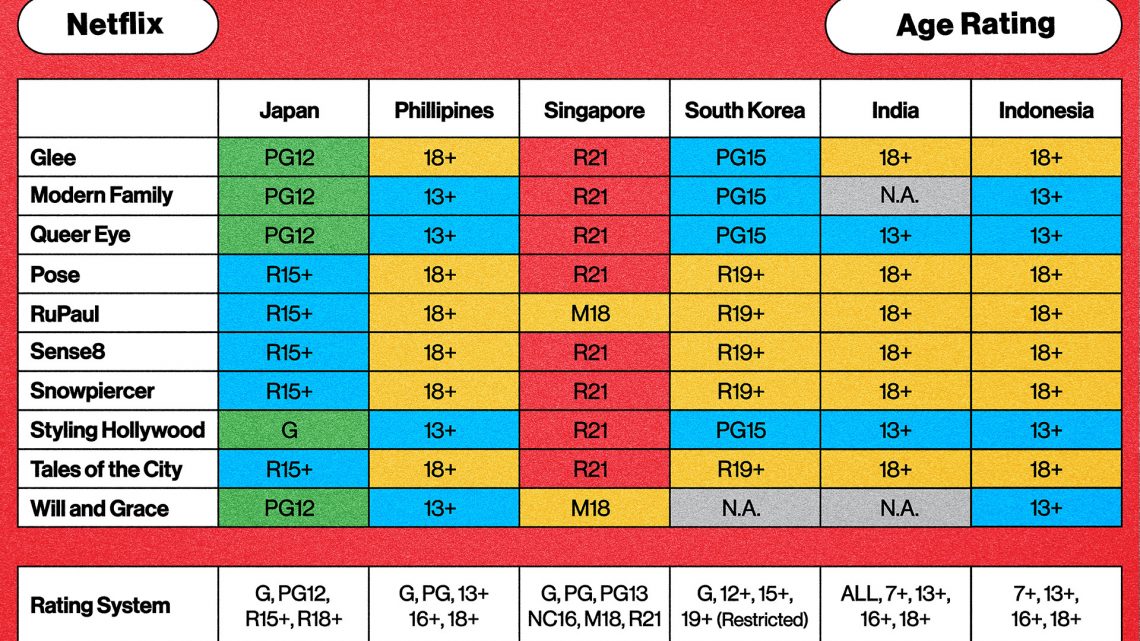 In Singapore, Netflix Shows With LGBTQ Themes Are Rated Strictly for Adults

Singapore prides itself on being a wealthy, modern, multicultural place, the city of the future—an unofficial nickname those behind the HBO show Westworld took quite literally.

But in many, often insidious ways, it’s actually still very much steeped in the past, with one of the most problematic examples of its stubborn commitment to tradition being the prevailing discrimination against the LGBTQ community.

To this day, Singapore upholds a colonial-era law that bans gay sex. In June, a petition seeking to ban Pink Dot, Singapore’s annual Pride celebration, said it would “showcase content promoting homosexuality.” While the event continued, the petition collected over 30,000 signatures.

In the realm of local media, Singapore’s national public broadcaster, Mediacorp, was criticized for a show that, among other things, portrayed a homosexual character as criminal deviant. Mediacorp apologized after criticisms went viral, but only after months of the show being on air. Meanwhile, positive LGBTQ characters are few and far between thanks to strict government censorship of books, shows, and movies.

But if you thought a foreign-owned streaming platform like Netflix would be immune to such an anti-LGBTQ streak, think again. Many objectively wholesome shows on Netflix dealing with LGBTQ themes are rated as adults only in Singapore.

Comparing the maturity ratings of 10 shows across Asia, VICE News found that Singapore, by far, was the strictest when it comes to LGBTQ content.

For example, the show Queer Eye, wherein five gay men give people makeovers, is “R21 (restricted 21),” the highest rating, indicating that it is only “suitable for adults aged 21 and above." By comparison, the show was rated PG12 in Japan; 13+ in the Philippines, India, and Indonesia; and PG15 in South Korea.

The innocuous U.S. network sitcom Modern Family, which features a married gay couple raising a child, was also slapped with an R21 rating. Elsewhere in the region, it received similar ratings as Queer Eye, except in India, where it’s not currently available on Netflix.

Just as surprising, the fashion reality show Styling Hollywood, which stars celebrity stylist Jason Bolden and his husband, interior designer Adair Curtis, is also R21 in Singapore. It was deemed “G,” or “suitable for all,” in Japan. 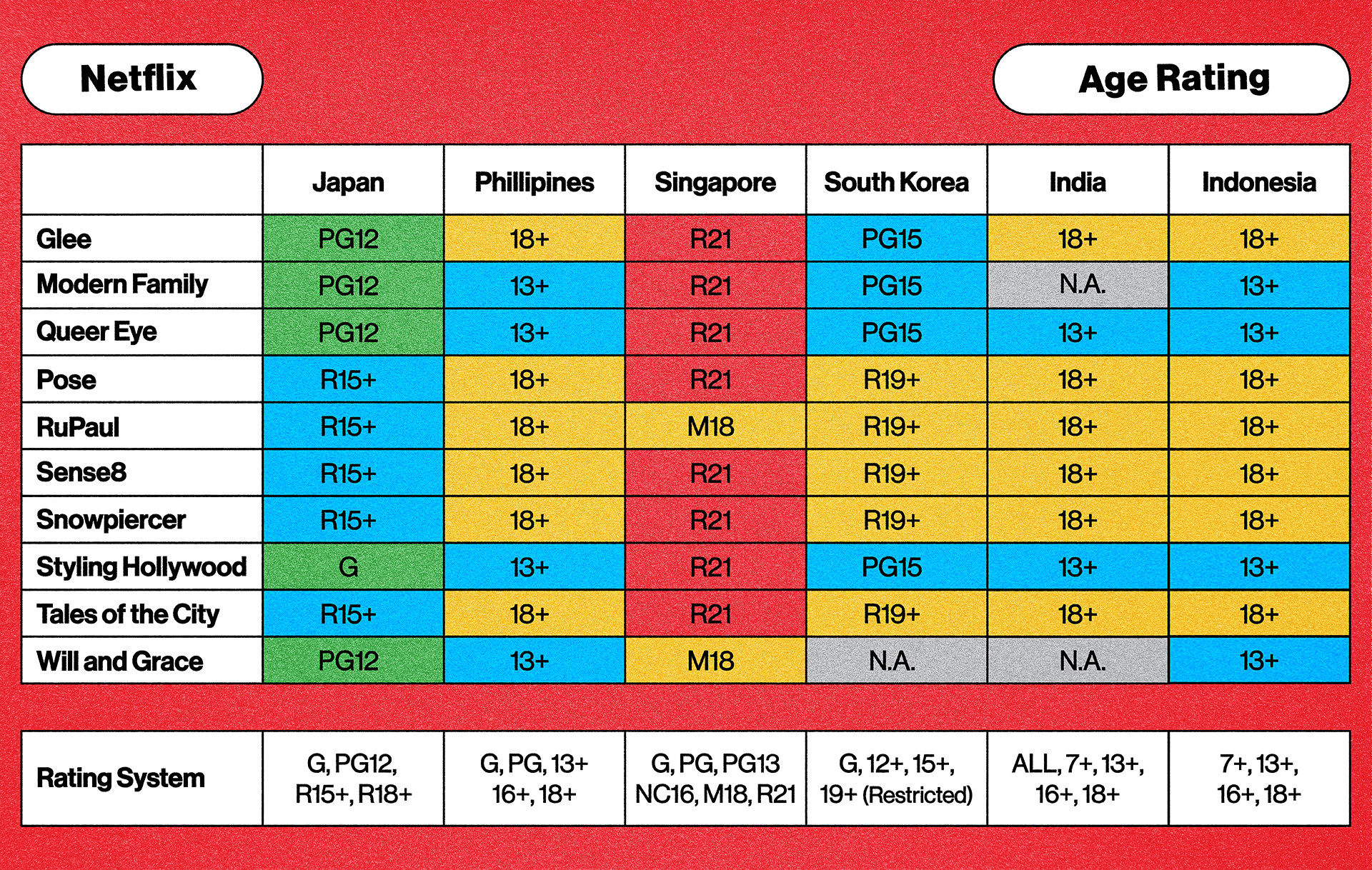 LGBTQ discrimination is still prevalent in Asia, and this has proven to be a challenge for Netflix, a global brand that prides itself on being inclusive, and whose original programming often include queer characters in lead and supporting roles.

In 2019, Netflix even halted production in North Carolina in protest of a law that bans trans people from using their preferred restroom. In North America and the United Kingdom, the streaming platform even includes an LGBTQ category. This section, however, is notably missing in some countries, including Singapore.

“I am curious as to why there is no LGBTQ category on Netflix Singapore. But regardless, I think Netflix is doing a great job for the LGBTQ community,” Joshua Simon, a radio DJ, musician, and LGBTQ advocate told VICE. “Before Netflix, watching a LGBTQ show, or show with any sexual reference (e.g. Sex and the City) had felt like we were watching pornography.”

But even Netflix is still beholden to Singapore's censors. As the company explains on its website:

“Each TV show and movie on Netflix is assigned a maturity rating to help members make informed choices for themselves and their children. Maturity ratings are either determined by Netflix or by a local standards organisation. Netflix determines maturity ratings by the frequency and impact of mature content in a TV show or movie... The local TV and movie ratings that fall under each Netflix maturity level may vary by region.”

In Singapore, Netflix follows the regulations of the government’s Infocomm Media Development Authority (IMDA). In 2018, at the IMDA’s behest, Netflix was forced to take down the shows Cooking on High, The Legend of 420, and Disjointed due to objections over their marijuana content. In the years since, they have also removed The Last Hangover for featuring drugs, and the 1988 Martin Scorsese film The Last Temptation of Christ, which is banned in Singapore.

Despite being based in the United States, Netflix is bound by the laws and culture of the countries it streams in, with Singapore enforcing some of the strictest policies when it comes to LGBTQ content.

Simon, the DJ, said that he has had to abide by these rules too.

“All LGBTQ content is pretty much R21, and in Singapore, films or shows which have an R21 rating… can’t be promoted or publicised on TV shows or radios,” he said. “I can’t even talk about Game of Thrones on my radio [show].”

Nonetheless, Simon said he believes there’s value in such content being available on Netflix. After all, while their maturity ratings are strict, viewers aren’t actually restricted from watching these titles, and at the end of the day, the decision of whether to watch a show lies with the viewers.

“Choice and control have always been important for our members, especially parents,” Michelle Parsons, Netflix’s kids product manager, said in a statement. So instead of requiring age verification, the platform has built-in features for filtering content.

This means that despite their ratings, Netflix shows with LGBTQ content still reach a wider audience than other types of content would in Singapore.

Simon said this has helped improve perceptions of the LGBTQ community in Singapore, even in small ways. He recalled his friend’s niece who schooled her parents on the ideal that “love is love” after watching the animated show She-ra, which features a character with two gay dads.

Now that the LGBTQ community has its own shows on Netflix, he said, “we are no longer sidelined, [or] have to go [out of] our way out to find that content.”

The People Deserve a Guillotine Emoji