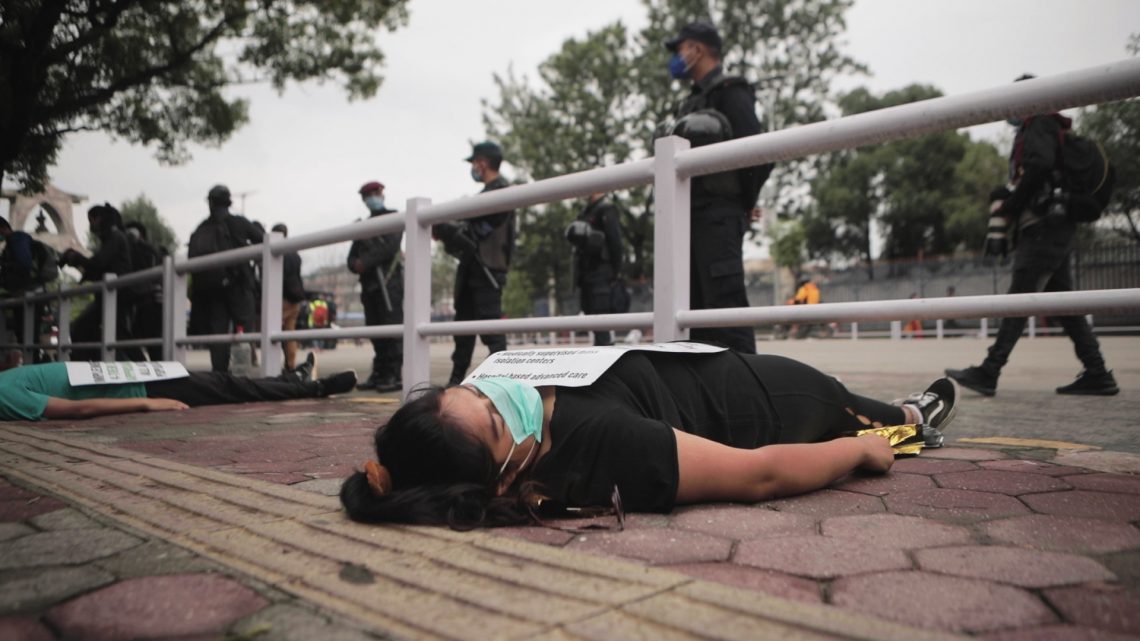 Young Nepalis Are Outraged by Their Government’s Inept, Corrupt Response to COVID-19, Among Other Things

Since June 9, large groups of young people have been taking to Nepal's streets demanding a better response to COVID-19.

Facilitated by a 200,000-member-strong Facebook group called “Covid-19 Nepal: Enough is Enough” protests have been spontaneous, sporadic, and largely led by middle and upper-middle-class people in urban areas.

The protestors are demanding that the government expand PCR testing, which is a more reliable test for COVID-19; fix the nation's quarantine strategy, which is currently leaving large groups of people in buildings without adequate food or water; protect healthcare workers; provide relief for migrant workers stranded on the Nepal-India border, and stop corruption.

Nepal has seen over 13,000 cases of COVID-19 which have painfully highlighted the inadequacies of the country's public healthcare system, which many claim has been undermined by corruption and a near-constant misallocation of funds.

In early April, several senior members of the government were accused of siphoning off money that had been allocated to purchase personal protective equipment (PPE) for medical staff. There were also additional delays in testing machine deliveries and some of the machines that were purchased didn't work.

Since then, much of the responsibility for purchasing PPE has been handed to the Nepali Army, which falls outside the purview of the country’s corruption watchdog agency. The Army has also been accused of corruption and mismanagement. Prime Minister KP Sharma Oli has also repeatedly underplayed the seriousness of the crisis, claiming the virus is like the flu and can be mitigated by drinking hot water.

While the COVID-19 protestors have been critical of government policy, they have been insistent that they are not “anti-government” per se.

“We are the government’s friends,” a 26-year-old Kathmandu native named Iih told VICE News. “Without a proper strategy to manage the crisis there will be a lot more frustration and riots will start breaking out, which is not good for the people or the government.”

Bhaskar Gautam, a political scientist who has written extensively on Nepal’s social climate, critiqued the protestors’ unwillingness to take a clear critical stand against the government.

“For the protests to have consolidated, deepened, and had a clear direction, a strategic decision needed to be made to challenge the nationalist rhetoric, but many of the protestors seem like they are embedded in the nationalism themselves, which has limited their ability to hold the powers accountable,” Gautam said.

The COVID-19 protests have also been a catch-all for citizens who are frustrated with the government's response to the killing of Dalits, who are lower-caste members in India and Nepal.

Many Dalit activists have been taking to the streets since late May when six young Dalit men were lynched in a village in western Nepal after one tried to marry a girl from a dominant caste. The government's response was to underplay the seriousness of the crime: the Home Minister claimed the young men had run and jumped into the river.

The recent passing of a citizenship amendment bill has also fueled outrage, as it prevents women from passing citizenship onto their children in the absence of an identifiable father. Additionally the bill orders foreign women to wait seven years to obtain citizenship when marrying a Nepalese partner, while requiring trans people to provide a medical certificates in order to receive citizenship that corresponds with their gender.

Across the board, the general criticism of the Communist Party of Nepal (CPN) is that it discriminates against women, marginalised caste groups, and ethnic minorities.

The ruling party came to power when Nepal's monarchical regime was toppled in 2006, but many believe the revolution failed in important ways. A new Constitution was promulgated in 2015, which was a result of the demand of the 2006 people’s movement to radically restructure the state. But the Constitution rolled back some affirmative action measures that had been instated to combat historical discrimination.

Dalits and women are vastly underrepresented in Parliament, the judiciary, and even when they are represented, critics say that they face numerous roadblocks to substantive participation.

While people concerned about Dalit murders and the country's discriminatory citizenship bill have been protesting the government in broader terms, the COVID-19 protestors have a narrower focus, simply critiquing Nepal's public health response.

Dhana Sunar, a former commissioner at the National women’s commission and an active member of the Dalit movement, said, “The COVID-19 protestors are clearly doing something good. I wonder if their lack of participation in the Dalit movement comes from the fact that they don’t see Dalit and women’s issues as ‘national’ issues in the same kind of way as public health policy, which is a problem.”

The insistence on the moral righteousness and non-partisan “apolitical” nature of the movement may have mobilised many of the young COVID-19 protestors, but the absence of a clear political program and the articulation of the problems in technical rather than structural terms is a potential pitfall.

“I am impressed by the organisational ingenuity of the young protestors,” Bhaskar Gautam said, “but the second phase of protests is a crucial time. Without setting specific goals to challenge the power structure, the movement can be very easily derailed.”

Here’s What You Need to Know About Australia’s ‘Second Wave’ of COVID-19
How One Large, Tragic Wedding Turned an Indian Town Into a COVID Hotspot