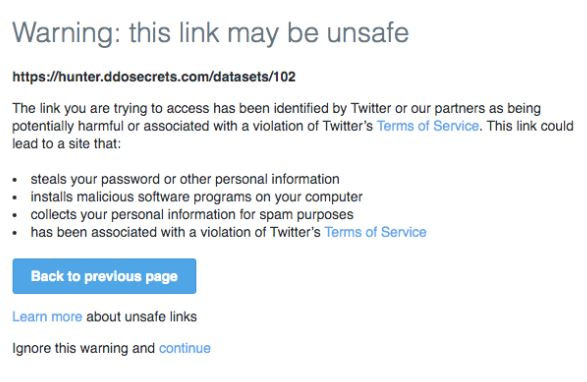 June 23, 2020 Off By Lorenzo Franceschi-Bicchierai

Twitter has banned the account of the collective that published almost 270 gigabytes of leaked documents from police departments all over the country.

On Tuesday, Emma Best, the founder of Distributed Denial of Secrets (or DDoSecrets), a WikiLeaks-style site that published the trove, said that Twitter had taken down the official account of the DDoSecrets collective, which is made of activists, journalists, and technologists. At the same time, when a Twitter user now clicks on a link that leads to the DDoSecrets’ site, it’s redirected to a warning that labels it as “unsafe.”

“We’ve worked with many national outlets on various projects, and our previous releases had been lauded as a ‘mini-Panama papers,’ among others things so it’s disheartening to see Twitter side with the police against researchers, journalists, and the public,” DDoSecrets’ founder Emma Best told Motherboard in an online chat.

Do you work or did you use to work at a police department? Or have you found some interesting data in this collection? We’d love to hear from you. You can contact Lorenzo Franceschi-Bicchierai securely on Signal at +1 917 257 1382, OTR chat at lorenzofb@jabber.ccc.de, or email lorenzofb@vice.com

The social media platform has historically been home to several organizations, such as WikiLeaks, that have distributed leaked or hacked material. In the last few years, however, it has banned some accounts that distributed hacked materials, especially if they included personal information, such as the account of the hacking group The Dark Overlord. WikiLeaks, on the other hand, has never been banned.

A Twitter policy dated March 2019 prohibits the use of the platform "to directly distribute content obtained through hacking that contains private information, may put people in physical harm or danger, or contains trade secrets." Another policy explains that users may not post people’s private information.

The trove of documents included “highly sensitive information such as ACH routing numbers, international bank account numbers (IBANs), and other financial data as well as personally identifiable information (PII) and images of suspects listed in Requests for Information (RFIs) and other law enforcement and government agency reports,” according to a government alert about BlueLeaks obtained by KrebsOnSecurity.

This story was updated to include Twitter's comment and a link to the social media's policy on distribution of hacked material.

The EU Lifts Its Travel Ban But Not For the US

China vs India: Who Benefits?