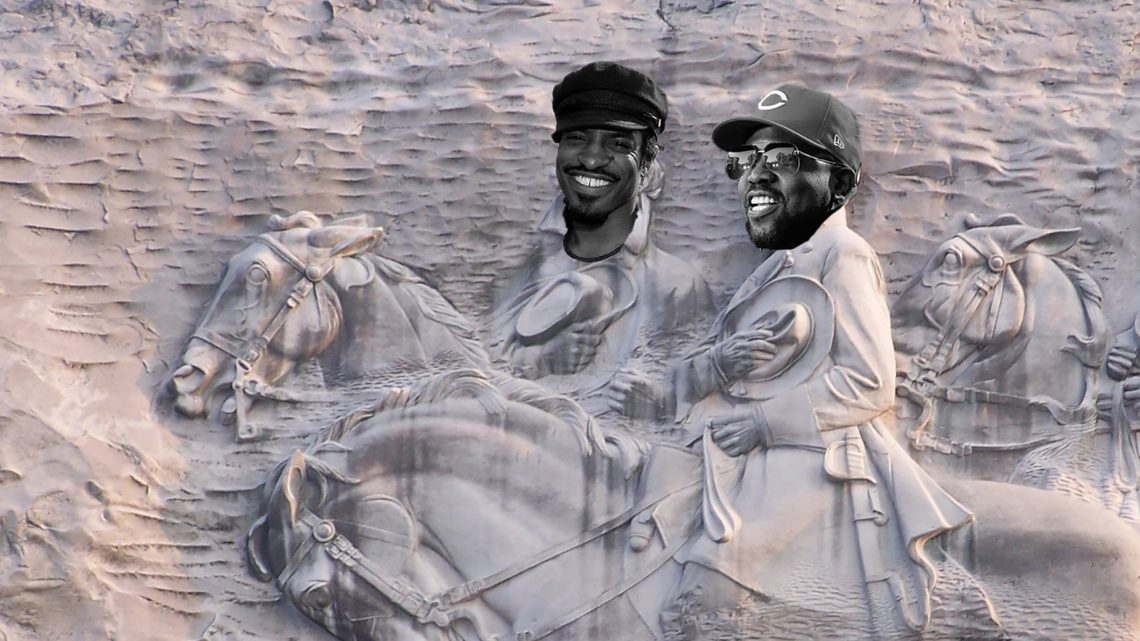 Several years ago, everyone seemed to re-notice that there was an unnecessarily large tribute to three members of the Confederacy on the side of a giant rock just outside of Atlanta. Stone Mountain isn't just the largest Confederate monument in the world, it's the biggest bas-relief carving on earth, and the towering depictions of Jefferson Davis, Robert E. Lee, Thomas J. "Stonewall" Jackson and their horses are bigger than Mount Rushmore.

The monument was proposed by the United Daughters of the Confederacy (UDOC) in the early 1920s, when Stone Mountain itself had already been established as an important site to the newly resurgent Ku Klux Klan. Helen Plane, the head of the UDOC at the time, asked the monument's original sculptor to consider including the KKK in the piece, too. "I feel it is due to the Klan which saved us from Negro domination and carpetbag rule, that it be immortalized on Stone Mountain," she wrote. "Why not represent a small group of them in their nightly uniform approaching in the distance?”

The world's largest participation trophy was started in 1923, but due to a combination of factors, it wasn't finished and formally dedicated until 1970—more than 100 years after the end of the Civil War (and 14 years after the last Civil War veteran died).

In 2015, in the wake of the horrific murder of nine people at a historic Black church in Charleston, South Carolina, the necessity of a Confederate monument like Stone Mountain, especially on the site of the KKK's longtime Memorial Day cross burning, was thrown into question. Activist and filmmaker Bree Newsome famously removed the Confederate flag at the South Carolina State House to the applause of onlookers, leading to her arrest but triggering a domino effect wherein communities began to object to the continued display of other monuments to slaveholders and Confederate leaders. While some organizations called for the Confederate leaders to be sandblasted right off Stone Mountain, a Queens man named Mack Williams had a different idea.

Williams launched a MoveOn petition, asking then-Georgia governor Nathan Deal to add Big Boi and André 3000 OutKast to the monument instead. "By no means do we wish to erase or destroy the current carving, which, regardless of its context, is an impressive and historic work of art," he wrote. "We simply wish to add new carvings, of Atlanta hip-hop duo OutKast, to the mountainside [...] I believe that Daddy Fat Sacks and Three Stacks should be carved riding in a Cadillac (as is their wont)."

More than 15,000 people have signed that petition to signal their approval, including the half-dozen signatures that were added within two hours of this writing. "I tried to make it clear that it was mostly a joke and, you know, I was sticking my thumb in the eye of people who’d take offense,” Williams told the New Yorker. “There’s obviously worthier folks to add to the mountain, but I think OutKast would piss off the right people.” (Two years later, after Heather Heyer was killed by a far-right protester in Charlottesville, he'd changed his mind. "I’m thinking we should probably just blow it of the side of the mountain altogether," he said.)

Stone Mountain is still there, but as an increasing number of cities have finally started to remove their Confederate, racist, and problematic statues, that giant carving has gotten everyone's attention again—and, once again, OutKast has been suggested as a replacement. (Blowing the shit out of it is an idea that has also been revisited.)

Big Boi and André 3000 aren't the only entertainers who have been floated as possible replacements for what could become several thousand pounds of Confederate-shaped scrap metal. Earlier this week, Kassie Thibodeaux started a Change.org petition, asking Louisiana governor John Bel Edwards to put a statue of Britney Spears on one of that state's potentially vacant plinths.

"Not only has Britney proven her talent, but she's proven her strength of character by not only overcoming highly publicized mental breakdown, but by continuously working towards improving herself. She's an inspiration to millions," Thibodeaux wrote. "Do the right thing: Replace the Confederate statues with an actual Louisiana hero and influencial [sic] human being."

Much like Williams, Thibodeaux actually started her petition a couple of years ago, but she reopened it when statues were being taken down (or pushed over, or just shoved straight into the sea) again this month. "If Britney were to see the petition, I'd hope she'd realize just how deserving she is. That she has inspired and continues to inspire so many lives, and means more to us than most of the historic figures we've learned about in history class,” she told Yahoo. “Because unlike members of the Confederacy, Britney's impact has been one of inclusion and positivity.”

A Tennessee man has also encouraged his state legislature to swap out a questionable traitor or two and replace them with Dolly Parton. "From the Dollywood foundation that has provided books and scholarships to millions of American children, to the millions of dollars she has donated to dozens of organizations such as the Red Cross and COVID-19 research centers, Dolly Parton has given more to this country and this state than those confederate officers could ever have hoped to take away," Alex Parsons wrote.

It has previously been suggested that a bust of Parton should be put in the Tennessee State Capitol, replacing the bust of Nathan Bedford Forrest, the Confederate general who became the first Grand Wizard of the KKK. (He was also a war criminal who massacred 300 mostly Black Union soldiers, many of whom had surrendered, at Fort Pillow. Ulysses S. Grant later wrote that the full account of Forrest's atrocities "shocks humanity to read.")

And Richmond, Virginia also weighed in with an inspired choice, with a recommendation that the city's massive statue of Robert E. Lee should be replaced with an homage to Oderus Urungus, the late GWAR frontman. The band's drummer, Jizmak Da Gusha, visited the statue last week and seemed to signal his approval from behind his rubbery dog mask. "There’s a petition to put GWAR on that horse instead of Robert E. Lee. I strongly encourage that everyone sign that petition online,” he said in a now-deleted YouTube video. "Fuck that guy."

As fanciful as some of these requests might sound, they're not entirely beyond the realm of possibility. Last July, Arkansas governor Asa Hutchinson signed a law to replace the statues of attorney Uriah M. Rose (who advocated for a "WHITE MAN'S government in a WHITE MAN'S COUNTRY") and former governor James P. Clarke (who spoke of "[preserving] the white standards of civilization") in the U.S. Capitol with statues of civil-rights activist Daisy Gatson Bates and country music legend Johnny Cash.

Those statues aren't on their way to D.C. yet, though. "Right now we are about 15% funded. The process of establishing a steering committee and securing funds has slowed progress," Kurt Naumann, Director of Administration and Government Relations, told VICE. "Covid-19, too, has slowed down the solicitation of funding. Looking at 2021 for fruition."

Let's hope that 2021 brings continued inspiration for who deserves to be permanently memorialized—but we'd like to give our thumbs up for OutKast as a start.

Mayan Ruins in Guatemala Could Become a U.S.-Funded-Tourist Attraction