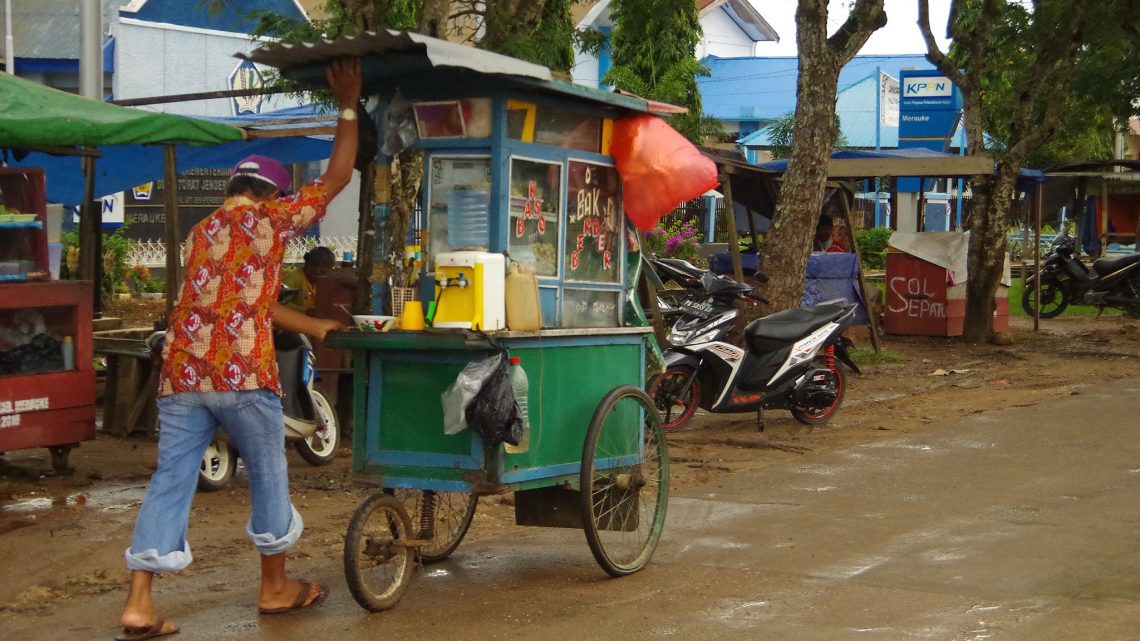 Why Are So Many Suspected Indonesian Terrorists Moonlighting As Meatball Soup Hawkers?

On Monday morning, in a pre-dawn raid, Indonesian counterterrorism authorities arrested a 31-year-old man, identified only by the initials A.M. He was taken into custody on suspicion of involvement with two explosive devices found in Cikampek, 51 kilometers from Jakarta, on June 2nd.

The police force’s Counterterrorism Special Detachment 88 (Densus 88) searched the suspected terrorist’s home in Karawang, East Java, before arresting him at the market where he worked.

A.M.’s father, who lived with him, told local media he was “in shock” when police turned up to search his son’s room, saying he had never suspected his son of terrorist activity.

The head of Karawang police, Arif Arifin, confirmed the arrest on June 8, but declined to divulge the name of the terrorist group with which A.M. is accused of being involved.

What is certain, however, is A.M.’s day job: bakso vendor.

Bakso, a meatball soup often purchased from street side hawkers, is a widely available and beloved Indonesian comfort food, but it also appears to be something else—namely, a convenient cover for suspected terrorists.

Indeed, this isn’t the first time a suspected terrorist has posed as a bakso seller.

In May 2018, Densus 88 arrested a 39-year-old man, identified by the initials S.Y. By day, S.Y. was a bakso hawker. By night, he studied radical teachings with a tempeh distributor.

Yudi Handoko, head of the neighborhood association in the area where S.Y. was caught, told local reporters that five police cars full of armed officers escorted S.Y. from the area.

“At first I thought it was drugs. It turned out he was a terrorist,” Handoko said.

In 2011, this time in East Kalimantan province, Densus 88 arrested two men named Juardi and Faisal, who were allegedly plotting to plant cyanide in police cafeterias.

Terrorism expert Nasir Abbas told VICE that disguises are part and parcel of terrorist organizations’ efforts to blend in and conceal their plots. Bakso vendors, given their near ubiquity, rarely raise any eyebrows.

"Indonesian police have captured roughly 2,000 terrorists. We’ve seen an array of disguises, but recently since 2019, we’ve seen multiple terrorists attempt to pass as bakso sellers. This is likely due to the ease of the job,” said Abbas, who is himself a former leader of the now-outlawed Southeast Asian terrorist group, Jemaah Islamiyah.

“Bakso is an everyday dish that is easy to make for cheap. Most sellers simply use a cart to sell their product in various places. Members of terrorist cells often lead nomadic lifestyles, picking up jobs here and there.”

Bakso vendor isn’t the only informal sector cover used by terrorists. In November 2019, a suicide bomber disguised as a motorcycle taxi driver blew up a police station in Medan, Indonesia. There are over 2.5 million motorcycle taxi drivers in the country, making the cover equally, if not even more, ideal for avoiding suspicion.

But the question remains: What came first, the bakso, or the extremism?

Sidney Jones, director of the Institute for Policy Analysis of Conflict (IPAC), told VICE that more often than not, those who have become radicalized tend to then gravitate towards informal and inconspicuous jobs like bakso vendor, rather than extremist groups recruiting from within those circles.

“So you can get some fairly highly educated people deliberately seeking jobs in the informal sector, not to avoid police, but because it gives you a very high level of mobility,” she said. “So you get these interesting constellations. Networks of ice cream vendors, networks of bakso sellers, sellers of fried bread.”

The same holds true for women who become recruited into extremist circles, she added, with such women often setting up informal businesses selling, among other things, headscarves, and then “the women organize other women.”

“It’s not as though extremist leaders are reaching out to people in the informal sector,” Jones said. “It’s people who are already in a[n extremist] network choosing to form businesses of different kinds to keep them together and provide some minimum income, usually while doing religious teaching on the side.”

While some radicalized bakso vendors, for instance, may from time to time seek to bring other bakso vendors into the fold, Jones said that kind of recruitment is “not systematic.”

“For example, there was one recent case we looked at where… the guy set up in a market area of Bukittingi and managed to bring in a couple of other traders in the same market area,” Jones said.

But such incidents are isolated, and extremist recruitment most commonly starts in religious discussion groups organized by teachers, with such groups existing “for every strain of Islam, from the most moderate to the most extreme.”

As the world’s most populous Muslim-majority nation, Indonesia has struggled with radical Islamic terrorism since the fall of the authoritarian New Order regime in 1998. However, thanks to the moderating influence of strong social and religious organizations like Nahdlatul Ulama and Muhammadiyah, the scope and severity of the extremism has never matched that of the Middle East and North Africa.

Following the 2002 Bali bombings, the deadliest terrorist attack in Indonesian history, which killed more than 200 people, counter-terrorism in the archipelago has been a largely civilian undertaking, spearheaded by Densus 88. Since 2015, the most active terrorist group in the country has been Jamaah Ansharut Tauhid, which has pledged allegiance to ISIS.

What We Know (and Don’t) About Magic Mushroom Paralysis

‘The Last of Us Part II’ Is a Grim and Bloody Spectacle, but a Poor Sequel