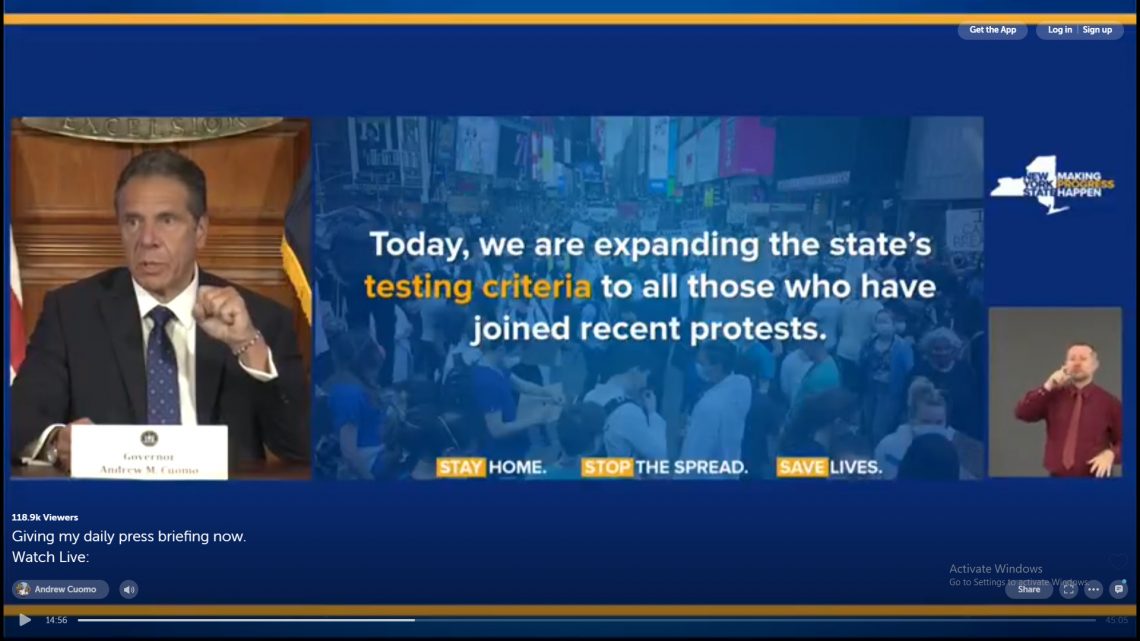 What do you get when you combine widespread civil uprising against police brutality, an intense economic crisis that has left millions unemployed, and a global pandemic? June 2020 in America, baby.

Local leaders in some of the biggest cities in the U.S. have chosen to adjust their (already lackluster) COVID-19 responses based on the wave of protests in the wake of the killing of George Floyd. Chicago mayor Lori Lightfoot and Los Angeles mayor Eric Garcetti were both criticized for closing testing sites in their respective cities due to the unrest (10 of the 11 state-run test sites in Chicago have since reopened). People angry at these closures claimed the mayors were weaponizing COVID-19 against the population of their cities in order to cow them into submission.

On Thursday, New York governor Andrew Cuomo, perhaps eager to avoid similar critique, declared in his afternoon press briefing that the state’s coronavirus testing criteria would expand to ensure anyone who attended a protest in the past week would have access to COVID-19 testing. Seems good, right? He cares about our health as we exercise our First Amendment rights, doesn’t he? Wrong: Anyone who thinks they might have been exposed can get a test, making Cuomo’s insistence on the “expanded criteria” a little suspicious.

First of all, according to the official New York City COVID-19 information portal, “all New Yorkers should get tested now, whether or not you have symptoms or are at increased risk.” There aren’t even testing parameters to expand anymore. Everyone who wants to get tested for COVID-19 explicitly could already, at least in New York City. Residents in the rest of the state can get a testif they think they might have been exposed.

At a time when distrust of law enforcement and city officials is at an understandable high, it’s easy to wonder whether going to get a COVID-19 test and telling your doctor you were protesting is the best idea.

The way the U.S. has tackled COVID-19 has already raised numerous privacy concerns for its residents. People who tested positive for COVID-19 in Alabama and Massachusetts had their addresses handed over to law enforcement in order to “protect first responders” back in March. Contact tracing, a public health measure that entails tracking down and informing all the recent contacts of an individual who tests positive for COVID-19 in order to prevent further transmission, could be a way for Big Tech to get their paws on even more of our data, if executed carelessly. OAnd one man is currently suing his former employer, rental car company Enterprise, who he claims fired him after he refused to disclose his mother’s COVID-19 test result.

Would doctor-patient confidentiality, that white lab-coated bastion of privacy, protect us? Not according to experts at the World Privacy Forum, who say that a test conducted at a county-run or state-run clinic, like any of the NYC Health + hospitals, may not be subject to HIPAA laws like a test conducted at a private clinic would be.

Secondly, Cuomo’s concern for protesters feels hard to take, given how badly New York City and New York state screwed up its COVID-19 response (although this ProPublica article does a pretty good job of outlining it) and the way Cuomo and his frenemy Bill (de Blasio) continue to empower the NYPD and state police to inflict violence on protesters. Cops are kettling people, making social distancing impossible; arresting people en masse, which exposes them to the perfect COVID-19 transmission environment that is a correctional facility (a problem Cuomo has failed to deal with again and again); and unleashing tear gas on crowds, which experts say makes a second wave of COVID-19 cases more likely to occur.

Not only that, but public health experts are already condemning the racism behind the killing of Floyd, Breonna Taylor, Tony McDade, and the frankly countless other Black Americans at the hands of the police department as a threat more deadly and corrosive than, again, the literalt global pandemic. If Cuomo truly cared about public health, he would not have doubled the number of cops patrolling the streets of New York City, who are beating and detaining peaceful protesters with impunity while claiming they want to stop looting.

It feels conspiratorial, the idea of Cuomo trying to medical Pied-Piper his state’s protesters into revealing their identities, chuckling and rubbing his hands gleefully as the swabs and blood samples roll in. But after living through this year, can we really say with a straight face that anything is impossible?

If you’re experiencing COVID-19 symptoms, like a dry cough, fever, body aches and chills, or reduction in sense of taste and smell, you should go to the doctor and get a COVID-19 test to reduce your risk of transmitting anything to the people around you. But there’s no reason to bring the protests into it; you can just let the technician know you think you could have been exposed to someone else with COVID-19 and leave it at that.