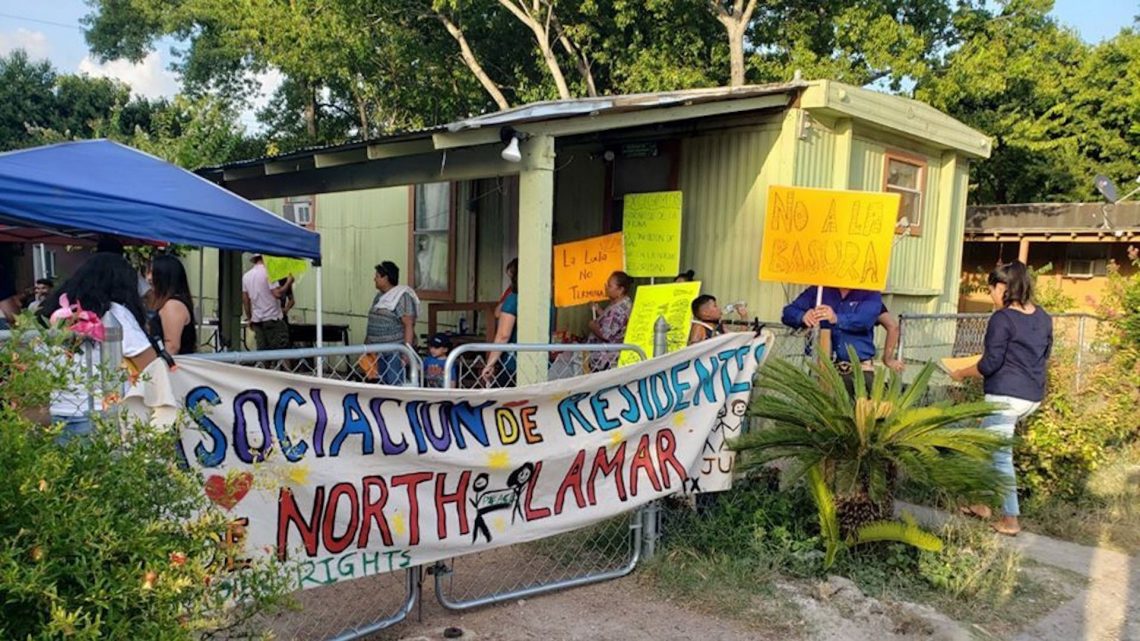 For years, the residents of a low-income, majority-Latino trailer park in Austin, Texas say they’ve struggled under the thumb of two prominent investors known for snapping up cheap communities like theirs nationwide and raising the rents.

But that all ended Friday when the North Lamar Mobile Home Park tenants closed a $6.26 million deal to claw their park back.

The solution, Oliver said, was for people to “band together and buy their own park.”

And that’s what the North Lamar tenants decided to do.

“It’s like victory in a long battle,” Roberto Sanchez, the 47-year-old president of the park’s tenant group, the Asociación de Residentes de North Lamar, said in a Spanish-language interview translated by tenant organizer Gabriela Garcia, whom the community worked with throughout their fight.

“It was about renter’s rights, they thought they could just walk all over low-income people, and they were going to get to do whatever they wanted,” Sanchez added.

Sanchez and his neighbors will now convert the park into a cooperative — a growing model for the mobile home communities nationwide looking to fend off private equity interest. And, now that they’re in control, the North Lamar residents say they’ll keep their park affordable, too.

“It’s a wonderful feeling to know all the work we put in is going to finally result in us owning the community.”

Soon after buying the property, the new owners threatened rent and utility increases of worth hundreds of dollars a month for some households — and evictions if tenants didn’t oblige. The residents sued instead, successfully stalling those price hikes and ensuring any increases were more gradual. But the residents of the North Lamar park still lived for years with higher costs and subpar park management, they said.

READ: Landlords Can't Evict Their Tenants. So They're Shutting Off Their Utilities Instead.

Many tenants now pay almost double what their housing costs were in 2015, according to a letter the park wrote to the city of Austin this year. Before the park was purchased, many paid $390 a month, including utilities.

“They’ll have so much more control over their own destinies, and if they’re not able to pay rent, as a community, they can talk about what to do,” said Shoshana Krieger, the project director at BASTA. “As of Friday, there’s a much larger buffer between each of those households and homelessness.”

For his part, Rolfe told VICE News he’d long offered to sell the park and congratulates the tenants on taking back control of their property. Rent increases were necessary in prior years, he said, because the park was charging far below market value when he came in, and needed serious repairs.

“The park was on the cutting edge of being torn down,” he said.

The tenants just needed to come up with the right offer, working with the national mobile home cooperative group ROC USA, which helped finance Friday’s deal, along with the city of Austin, which contributed a $2.5 million bond. Local city council member Gregorio Casar told VICE News the investment was worth it considering “it’s a community where for decades working class and poor people have thrived near the center of our city.”

In the past several years, private investors big and small have swarmed under-priced trailer parks, particularly in gentrifying communities with glistening real estate prospects. The playbook for those buyers usually includes raising rents, cutting costs, and raking in steady returns from a housing sector that’s been called “recession-proof.”

Rolfe and Reynolds, who purchased the North Lamar Park, also run an organization called Mobile Home University, which teaches would-be investors the ins and outs of their business, which has so far made them the fifth-largest mobile home park owner in the U.S. at 280 communities across 32 states, according to their website. When they brought their boot camp to Austin in 2017, the North Lamar tenants showed up and protested.

Trailer parks are typically chock-full of tenants who’ll stay there for years since there’s nowhere better to land, especially in the midst of an affordable housing crisis. They often own their homes and rent only the land beneath them.

If the “lot rent” increases, they’ll likely grin and bear it. Moving a mobile home to another park regularly costs thousands of dollars, because the homes are, well, not all that mobile. This makes revenue pretty consistent for mobile home park investors. Housing advocates and progressive legislators including Sen. Elizabeth Warren have said that reason alone, though, makes jacking up the rents on mobile home tenants predatory.

“I’m the first to admit that mobile home lot rents are insanely low and can only go up,” Rolfe said in a 2019 interview with BiggerPockets, a real estate investing site, responding to a question about the fairness of the John Oliver segment that tore his business apart. (Rolfe told BiggerPockets that the segment earned him death threats; he did not find it fair.)

But Rolfe has long noted that by investing in mobile home parks and keeping them standing in the first place, he and other investors are helping to preserve the nation’s slim affordable housing stock.

The North Lamar tenants plan to increase their rent only slightly now that they own the park — from $585 to $630 — but they say that they’re spending any extra cash on bettering their community with improved roads, repairs, trash collection, and lights.

“It’s a wonderful feeling to know all the work we put in is going to finally result in us owning the community,” Jennifer Salazar, a 27-year-old resident of the park and secretary for its tenants organization, said.

‘Hands Up Don’t Shoot:’ Brooklyn Erupts In Violence During a Second Night of Protests