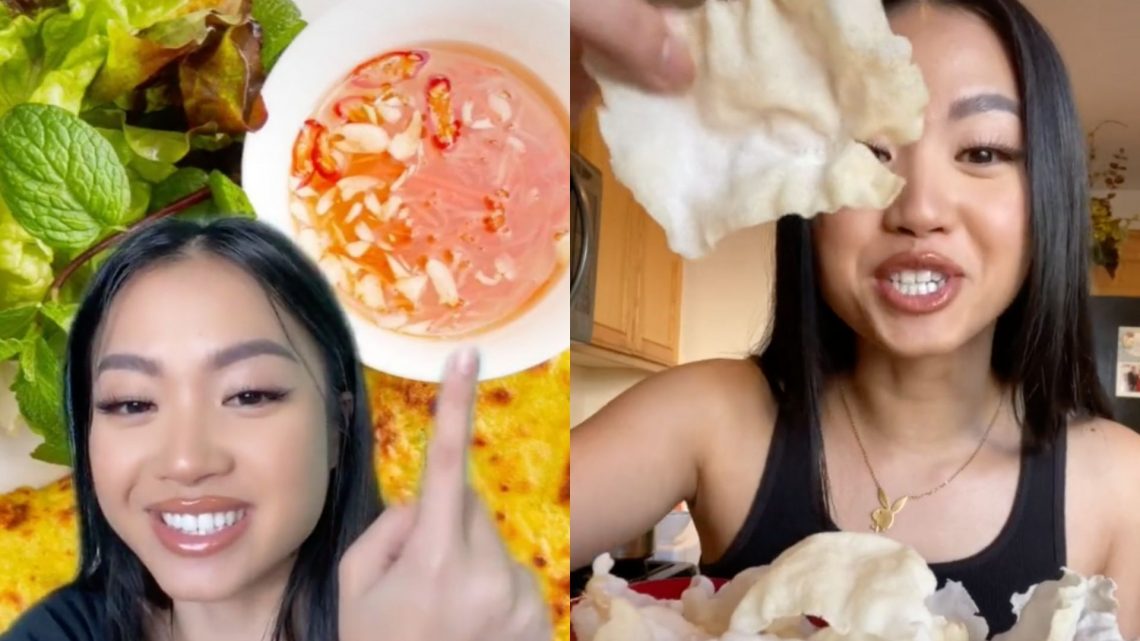 TikTok Is the Food Platform of the People

Tway Nguyen, also known as @twaydabae, isn't totally sure why a video of her cooking fried rice on TikTok blew up to 5.5 million views, but her guess is that it's because she cracked two eggs at the same time. She thinks that's why TikTok's algorithm pushed it onto the For You page, the assortment of recommended videos you see when you open the app. Though she used to post dancing videos and makeup tips with no real rhyme or reason, Nguyen has used TikTok exclusively for cooking ever since, picking up millions of views and gaining a following of over 282,000 users.

Since that video on March 22, TikTok has been a fast-growing space for Nguyen, who decided to take her kitchen experience online after finishing culinary school last year. She'd initially planned to work on the line in a kitchen, but now, social media is her full-time job. Though she's been making food content on YouTube and Instagram for longer, her following on those platforms has grown slower. "A really good thing about TikTok is it's still in the beginning stages where we're still getting a lot of genuine and original personalities rather than just a lot of people copying each other," Nguyen told VICE. "Right now is like the golden time."

If you want to make food videos in 2020, and all you have is a phone, your home kitchen, and not much of an online following, where do you start? For people at the beginning of their path in food, TikTok is increasingly the answer. There, there's still a chance to become a food star.

In the food world, TikTok is the anti-YouTube. At 15 years old, YouTube now feels like the old guard, while TikTok, which was released worldwide in 2018, has been called the "wild west." On YouTube, food videos are like TV shows—Bon Appétit's now push the 30-minute mark—but TikTok videos max out at one minute. As YouTube has become another product for influencer chefs and media publications like this one, the expectations for content and production are high. TikTok, meanwhile, has the DIY appeal of a new platform.

There's a lo-fi, unpolished quality to TikTok's food world, where videos are often taken by a person holding the phone in one hand and cooking with the other. Sometimes, the kitchens are dirty, the shots are blurry, and the omelettes flip imperfectly, but that doesn't stop the views; the popular user @blockboyjmomey posts cooking videos made in a cell at a California prison. "A good phone, a good mic, a tripod, and some window light—that's what I use. There's nothing fancy about my kitchen. It's just simple, relatable," Nguyen said. Everything feels like you could do it too, without a production crew, a test kitchen, or even high-end cookware.

The style of overhead shots and floating hands pioneered by Tasty became the norm on other platforms, but there isn't a formula for a TikTok food video yet. Some clips on the platform are narrated in quick hits of instructions; others are set to popular audio clips, which allows food creators to ride on the buzz of songs backing viral dance trends or memes.

Only so much can be explained in one minute or shown in a meaningful way through un-narrated clips, so TikTok food videos focus on quick techniques, replications of well-known dishes, and "hacks." The effect of this is that the food is simple, and one of Nguyen's early goals was to show young Asian Americans how easy their cultural foods are.

TikTok food is best explained by its big trends: the viral one-pan breakfast sandwich showed a lifehack for a common meal; the three-ingredient dalgona coffee can be made by anyone who can vigorously whisk; the tiny pancakes are just regular pancakes but small. Consider the Hot Cheetos-crusted mozzarella sticks, the Oreo cake, and the bread pizza, and it's clear that TikTok foods draw on familiar, easy-to-recreate elements instead of introducing people to entirely new concepts.

Sisters Ashley and Taylor Johnston have made it big on TikTok by making nothing but smoothies. As @twincoast, their feed is a rainbow grid of Vitamix containers full of blended fruit. They uploaded their first smoothie video on TikTok in November 2019 and "it went pretty much viral overnight with over 500,000 views," the sisters told VICE in an email. Today, that video has over 1 million views.

"We think that our smoothies have been popular on TikTok because it is different from the other content being uploaded," the Johnston sisters said. On YouTube, where they've had an account since 2012 and occasionally post food tutorials, they have a following of 61,000, but on TikTok, they've gained over 757,000 followers since last November. Their audience is excited to watch videos that show little more than a smoothie being scooped and smoothed with a spoon. There's a market for that though, the sisters said: "Our followers have grown to know what our smoothies look like and the exact spoon we use for our scoop videos."

Mike Spurlock, who posts videos on TikTok as @spurweezy, sees TikTok as a space to be realistic about home cooking. An event planner by trade, Spurlock previously shared his home-cooked meals in private group chats, but last July, he began cooking on TikTok to show a long-distance romantic partner what he was up to in the kitchen. Even after the relationship ended, he stayed on the platform, where his videos have gained him 62,000 followers. "People like to know that you don't have to be a world-star chef with world-star equipment to make a great meal," he told VICE.

Users who've found followings primarily on TikTok attribute their success to "the algorithm." As Instagram influencers and YouTubers see their view counts slide, they see "the algorithm" as something to be blamed, but on TikTok, the algorithm offers promise. Creating good, grabby content is king, both Nguyen and Spurlock acknowledged, but the algorithm—which dictates what ends up on the For You page—is necessary for being discovered.

"The way the TikTok algorithm works is you can not have any followers and overnight, your video can go crazy because of just... something," Spurlock said. The first video of his that got the algorithm's attention was one of him cooking bratwurst, because people in the comments began arguing over whether or not he'd burnt them, he said. Despite all the videos and articles offering ways to "hack" the TikTok algorithm, there's still a sense that no one really knows how it works—after all, if these tutorials really nailed it, wouldn't everyone be a TikTok star? When you look at it that way, "the algorithm" is another way of saying "luck."

No matter how the algorithm works, home cooking has worked for Spurlock on TikTok, though it hasn't been the same on other platforms. On Instagram, his follower count hovers under 1,000; one day, he wants to make the jump to YouTube. "I think [TikTok] users are a little bit more forgiving of, I guess, more home-styled content. The professional stuff is out there, but when I check on the OG TikTok chefs, what kinda brought everybody together was that we're all just focused on home cooking," Spurlock said. "On Instagram, it feels a little bit more commercial. Yes, you can have your own style, but it's way more curated. TikTok just feels more authentic."

That perception of authenticity could explain why big food brands haven't quite cracked TikTok, even if they've found monumental success on YouTube and Instagram. Perhaps the best example is Bon Appétit's absence from the platform, despite its huge YouTube presence. Though accounts with the handles @bonappetit and @bonappetitmag exist, they're blank and don't carry the magazine's branding.

With 1.2 million followers, Tasty runs one of the largest accounts in the TikTok food space, but its content appears to be cut from existing videos. First We Feast's page is similarly popular, though it mostly reposts random TikTok users. Thrillist, with 581,000 followers on YouTube, has just over 46,000 on TikTok; though its videos are more in line with TikTok's style, they rarely break 2,000 views.

Part of that, according to Alessandro Bogliari, CEO and co-founder of the Influencer Marketing Factory, is likely because of who runs media companies. "It's management that is definitely older. They might not understand what TikTok is," he told VICE. TikTok might seem too new to invest resources into, and the platform can change faster than companies might strategize around it. "It's relatively new, and the rules are changing every single day and every week. I think that a lot of brands are usually slower in decision making."

To Nguyen, part of the appeal of social media is that she controls the whole process. "I don't have to go through a boss to say, 'Okay, you can post your video,'" Nguyen said. With conventional food media catching well-earned criticism for gatekeeping, breaking into the field through traditional means can feel like an uphill climb. Jobs are scarce and landing them can be a mix of luck and connections. On TikTok, meanwhile, you don't need to worry about that: Anyone can hit record, publish, and have a similar shot at getting swept into the algorithm.