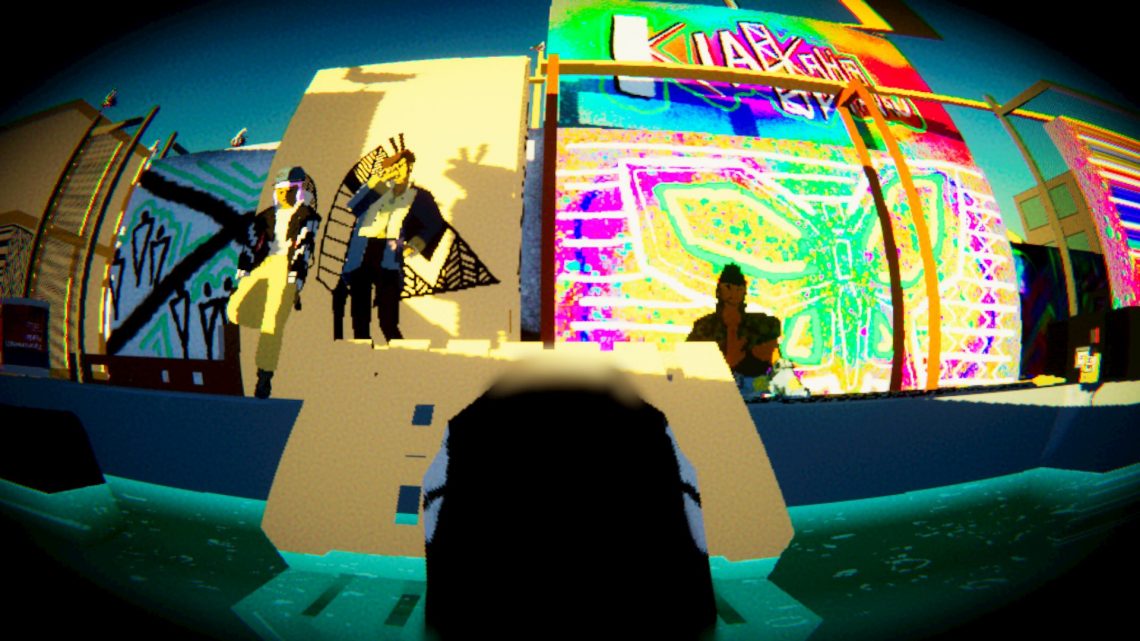 Photography is a rare mechanic in video games. Sure, many games contain photo modes, but there's a huge difference between being a disembodied camera and playing a game as a person holding a camera. Even when photography is a core mechanic in a game, it's often in a simplified form that becomes less about the embodied experience of taking photographs, and more about image making on a superficial level. Take one of the most popular photography games out there: Pokémon Snap. It matters less to the game who you are and why you're photographing creatures, and matters more that your composition is "good" in the eyes of Professor Oak.

Umurangi Generation, released recently for PC, is a first person photography game that aims to put an embodied experience of photography front and center. Through a series of vignettes it gives the player a sense of not only a culture, but of individual characters, and the historical moment they're living through. We discuss photography, The Sims 4's new ecological expansion, and more on this episode of Waypoint Radio. You can listen to the full episode and read an excerpt below.

Austin: Let's just say right now, for the next five minutes, we're gonna talk about a bit of spoiler stuff. It's clear within the first three levels, you get to the third level and you go like, "Oh shit, okay." And Cado's in like the seventh level, there's a lot there's enough here that like, I think the bulk of the game has you knowing what this is. So jump ahead five minutes or something, Cado will put timestamps in the [description] so that'll let you jump ahead to the next topic. This is a kaiju game. This is a game in which a giant monster seems to have attacked New Zealand, right? And, uh, you are playing in the generation of people who are living through that. There's graffiti about, you know, about the attack, about people lost in the attack. A lot of the culture reflects that, because it's a lot of movie posters about people fighting monsters, or the opposite, you know there's there's stuff about how "we're the monster" or you know stuff like that. Not as not as cheesy as what I just said though.

Cado: Do you know why you're not supposed to photograph the man o' war yet?

Austin: I haven't done it yet.

Cado: Oh I've done it. I don't understand what happens.

Austin: I don't think, I think it's bad for something? I think it's probably not good. Don't do it! I don't know why! One of the things it tells you in the tutorial is like "oh here's how you take photos, alright you're good to go. Quick thing, don't take any photos of these neon blue man o' war, that just show up sometimes in the levels that are just like on the ground, don't do it." It gives the whole thing a real Fooly Cooly vibe, it gives the whole thing this vibe of there is another layer happening over mundane life that you should do your best not to interact with.

Cado: Right. So part of me feels like this is about, well, I think that I think all the vignettes are the same, regardless of whether or not you actually photograph [a man o' war] or not.

Austin: Oh I think so too, yeah.

Cado: But there's this idea, obviously like pretty basic idea, of making something real by recording it, making something material by photographing it. And the parts that you're not supposed to pay attention to are the these small like seemingly [harmless creatures]. I mean yeah, man o' war are dangerous if they're in the water but the when they're out [on land] you can easily avoid them. They're not that threatening when they're not like secretly super long and you can't see their tentacles and they can really fuck you up. Is the kaiju just a giant man o' war, or is it something else?

Austin: That's what it looks like to me but I don't know. Who could say?

Cado: Yeah, it's very difficult to tell and I guess the flash probably doesn't even reach out that far. But there's a lot of thought out there about war photography, about photographing moments of violence and moments of people's suffering, that specifically the third zone in this game kind of jumps into. Where the kaiju is attacking and there are suddenly hurt people. And one of the objectives in the game is always get a group shot of your friends like there's these four characters, or three characters? Does the Penguin count?

Cado: Yeah. You know I thought the robots looked a little–

Cado: Anyways, what [your friends] are doing in that scene is helping UN soldiers who have been maimed, there's blood everywhere. It has this [specific feeling] in a way other games that have [photography]– I guess it's different because other games where there's like scenes of war you're a different type of actor in that scene, even if there's a photo mode in that game, it never strikes on this tension that exists when you photograph scenes of extreme violence and suffering.

I think part of what this game is trying to do is one of the, one of the big theories that Susan Sontag puts on in Regarding the Pain of Others, which is about photography in war zones, is this idea that [while] you need to be aware of the photographer's biases and framing and all of that sort of outward situation, it is important to understand that this is one of the only ways in modern society to get "the word out" in essence, is the movement of these images. And this game feels like they're trying to "get the word out" about a specific place.

Austin: There's kind of two thoughts there, do you think that it's purely allegorical or are you saying that that is a feeling it captures?

Cado: Both, actually. I think it captures that feeling and I feel like the game itself is trying to speak to a specific thing that I certainly am not aware of, what the UN tension with this population is, and will now probably go read about.

Austin: There is a really great interview with the developer of this game that I'll link you to called the "Umurangi Generation is Asking You to Care." It's from Vista magazine. The developer gets into specifically talking about their indigeneity in relation to ecological disaster. The quote that jumped out at me here was "One of the elders over here in Australia said to me, ‘we’re often listened to, but not heard.’ When I think about a lot of these societal issues, like these bushfires, one of the reasons it was so bad is because the government didn’t want to do burn-offs. A lot of indigenous communities had been saying — ‘hey, our families have been here forever, and we know what the right time is to do a burn off. So listen to us.’ And people would see that as just [nonsense], you know, ‘these fellows don’t know what they’re talking about.’ And that’s the energy I’m trying to capture in Umurangi: the idea that the game’s main crisis event probably could have been avoided if people could have cared in the short-term. I’m designing the game around people who actually do need to hear that message, not necessarily people who already know. I’m not trying to overload people with my philosophies. I want to ease people into these ideas, into my culture.” It's a really good interview, it's probably worth checking that out. Whether or not you play the game it's a good read.

Cado: Yeah, and like, I think that's part of what I like the most about this being a photography game specifically is that idea of the kind of transferring something, to [give it] a further reach in that specific way has a lot of history behind it, especially in [the player] being an outsider, in being someone not from that culture.

Austin: Right. Then using photography as like the thing that allows you to communicate in a language, not literally in a language obviously, I don't even mean figuratively, I don't even mean just layer one figurative "Oh, everyone can look at photos," but it is literally the sort of like "I can use a method that has been validated as being almost more authoritative than my own voice and perspective. The second I step behind a camera I erase the photographer, I erase myself, and even though my biases are in the photo, I can actually use the photo as a medium for communication. The second I would say any of these things I would be alighted or ignored from the conversation." You're totally right that that is the vibe, as you take photos here. You can almost see it based on what the bounties are in an interesting way, because they're are a mix of things that are like hashtag aesthetic, I mean they're all hashtag aesthetic. Even the ones that are like, "yo, give me a close up of the word cops." Okay, but that doesn't really communicate anything. The literal example of this is my close up of the word cops is just the word cops, but I then took the next photo which is the entire phrase, which is "cops come here to kill us." And the fact that the bounty is not for "cops come here to kill us" the bounty is someone will pay you just to get a cool shot of the word "cops." And to do that, you literally have to zoom in enough to not take the photo "cops come here to kill us" is really good, there is a lot happening there about what the market is interested in.

Cado: Yes, and that's important too because you get paid for every single one of these photos. Which, fuckin' what kinda fantasy world–

Austin: People need to see photos! It's the post-apocalypse!

Austin: Oh inflation though, that's cents, that doesn't mean anything. You have to understand, you made a quarter on that photo.