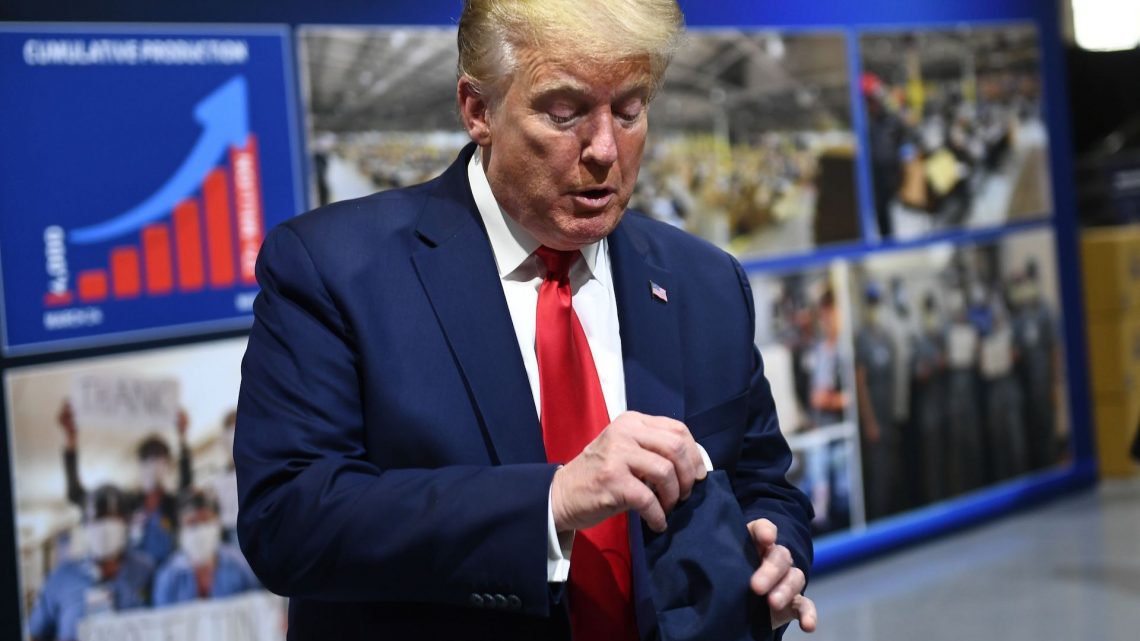 President Donald Trump refused to wear a mask during a visit to a Ford manufacturing plant in Michigan Thursday evening, defying the governor’s shutdown orders and ignoring pleas from the state attorney general to wear a face-covering during his tour.

The president’s visit to the Ford Motor Company Rawsonville Components Plant in Ypsilanti, which has been repurposed and now produces ventilators and PPEs amid the coronavirus pandemic, went on despite warnings from local officials.

Trump told reporters that he did wear both goggles and a mask as he walked through the factory, but decided against it once he reemerged in front of the media on the factory floor.

“I had one on before, I wore one in this back area,” Trump told reporters before handing what appeared to be a face shield to one of them. “But didn’t want to give the press the pleasure of seeing it.”

“Everyone’s been tested and I’ve been tested,” Trump continued. “I was tested this morning so it’s not necessary.”

Trump says that he was given a choice of whether or not to wear a mask during the visit. When the Ford executive chairman William Ford was asked to confirm, he shrugged and told reporters, “it’s up to him.”

All executives guiding the president on the tour, including Ford CEO Bill Hacket, were all seen wearing masks.

In the days leading up to Trump’s visit, Michigan’s Attorney General Dana Nessel, a Democrat, insisted that the president take part in the tour only if he’d be willing to wear the proper protective gear. In an open letter sent to the White House Wednesday, Nessel reminded Trump that such a precautionary measure was not only the suggestion of Ford Motor Company but also state law. She also warned that legal action would be taken if necessary.

“While my department will not act to prevent you from touring Ford’s plant, I ask that you respect the great efforts of men and women at Ford and across this state by wearing a face covering,” the letter reads. “Anyone who has been potentially recently exposed, including the president of the United States, has not only a legal responsibility, but also a social and moral responsibility to take reasonable precautions.”

She again asked the President to heed her warning on CNN Thursday.

"We are just asking that President Trump comply with the law of our state, just as we would make the same request of anyone else in those plants," Dana Nessel told CNN, warning that Trump would be asked to not return to any enclosed facility within the state.

Shortly after Trump’s tour began, Nessel called the president a petulant child who refuses to follow the rules in an interview with CNN’s Wolf Blitzer.

“Today’s events were extremely disappointing and yet totally predictable,” she said Thursday evening.

“He is a ridiculous person and I am ashamed to have him be president of the United States of America,” she continued.

The state of Michigan has been hit particularly hard by coronavirus. The state has over 52,000 confirmed cases and just over 5,000 deaths.

Cover: US President Donald Trump holds a mask as he speaks during a tour of the Ford Rawsonville Plant in Ypsilanti, Michigan on May 21, 2020. (Photo by Brendan Smialowski / AFP) (Photo by BRENDAN SMIALOWSKI/AFP via Getty Images)

Oh, Good: These Stores Put Up Signs Saying No Face Masks Are Allowed