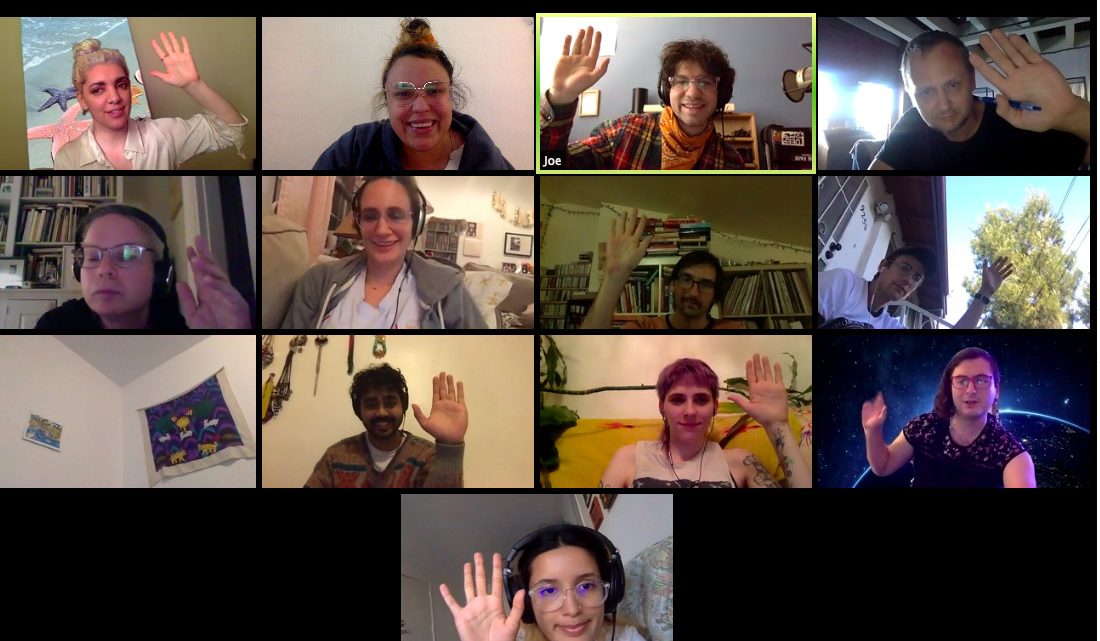 I’m an Independent Musician. Here’s Why I’m Calling My Representatives This Week

Responding to the coronavirus' devastation of the live music industry, a newly minted Union of Musicians and Allied musicians circulated an open letter to Congress last week enumerating a list of six demands, including an extension of unemployment benefits until the end of 2020, a rent and mortgage suspension, and funding for the arts and the U.S. Postal Service. Today, as a new Federal stimulus package makes its rounds through Congress, participating independent musicians from across the United States launched a Day of Action, creating a custom hotline enabling artists to dial their Federal and local representatives in quick succession, reiterating those demands and sharing their personal experiences during the crisis.

If you've tried calling the hotline, you might have noticed that the voice at the other end of the line belongs to none other than Philly-based rock musician and activist Sadie Dupuis, from Speedy Ortiz and SadI3. Speaking to VICE over the phone this afternoon, Dupuis, who is one of the UMAW's organizing committee members, told us why musicians are struggling right now, why organizing is more important than ever, and why she is calling her representatives today.

To mark the occasion, the UMAW is holding a "green room" meeting on its Instagram at 7 p.m. ET tonight, featuring performances by Suzi Analogue and Izzy True.

My name is Sadie Dupuis, and I’m calling my representatives today in solidarity with musicians, and hopefully to bargain for a better future for all of us.

[Since the coronavirus crisis hit], most of the musicians I know have had to cancel any outside-world work indefinitely. I canceled the bulk of my touring for the year on March 2nd, and just about the rest of it maybe a few weeks later. I feel very lucky that I have other ways to create income, whether that's scoring work or just general writing work, but plenty of my friends in music and elsewhere are completely cut off from their sources of income. Because many of us have still not received any benefits, we are struggling to pay rent without any income coming in, on top of whatever debt many of us have accrued, and just cost of living, bills, food, etc.

We all do different specialized work, but across the board, we make the bulk of our income from touring. I would say like 90% of the income I make comes from either touring or selling records and merch on tour. If you see a bump in record sales, it's because of the tour dates you did. Streaming is wonderful for people to be able to hear a lot of new music, but it generates almost no income.

I think that a lot of the industries that we're connected to are unionizing and hoping to protect workers, but there really are few protections for musicians. We're all freelancers, basically, and beyond whatever protections we may want from labels, venues, streaming services, and other bigger companies that we have to interact with, many of us just aren't receiving the benefits that as workers we deserve.

Historically, we’ve also been kind of slow to organize, partly because there are so many disparate genres, labels, and companies. A lot of musicians are really outspoken about the policies that impact their livelihoods, but often it's just sort of shooting it out into the void, via our social media, or only to our fans. I think it's really powerful to have a lot of musicians across different genres voice these concerns all at once, so people can see it's really a concerted effort that hopefully can make a change for all of us. So that was sort of the impetus behind the Union for Musicians and Allied Workers. 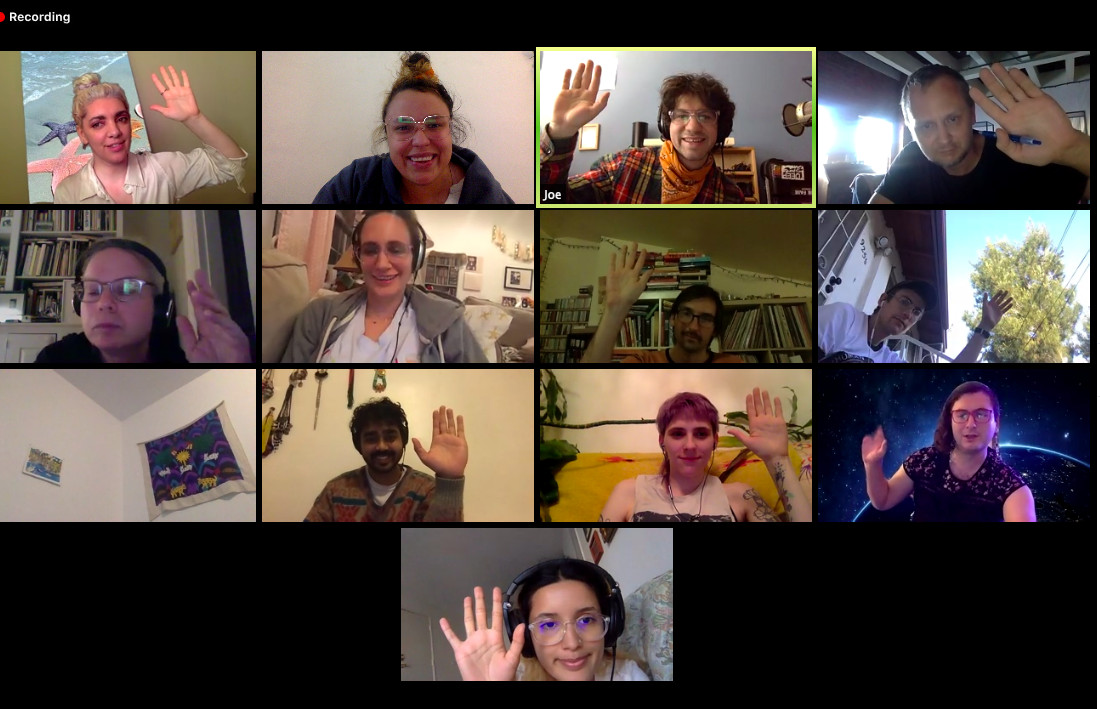 Some members of the organizing committee for UMAW

I was one of the creators of No Music for ICE, which we launched in October. We circulated an open letter that 1000 musicians signed in two days, basically pledging to not work on new creative projects with Amazon while they basically, through a series of contracts, are providing infrastructure for ICE. So a bunch of the people who are part of the steering community for UMAW came out of No Music for ICE—including Joey La Neve DeFrancesco, who kind of spearheaded this whole thing and clued in a bunch of the no Music for ICE people—but it's a lot of people from outside of there, too. Right now, there are 30 people working on organizing not only this big Day of Action, but looking at other issues towards the future, when we won't strictly be focusing on communicating with the U.S. government.

When we announced the UMAW last week, we sent out a demands letter asking for an extension of unemployment benefits through the end of the year through the CARES act. Beyond that, we want to make sure that musicians and really all workers regardless of immigration status can be eligible for these expanded benefits. We’re also asking for increased post office funding, an expansion of Medicare to cover everyone in the country, and a national rent and mortgage cancellation for the duration of the crisis—and that applies not only to musicians but to the venues and other small businesses that are tangential to their music.

The post office funding is really relevant to us because, as I said, most merch sales happen for us on tour, and we're now restricted to going through media mail. The only way to make that happen at an affordable rate is through the post office, and not through privatized mail services.

Basically, we have six demands that are pretty big asks that we want to make sure to continue to be on lawmakers' minds and agenda. Nearly 1000 people have signed [the letter] so far—some of my favorite musicians are on there! But by directing people to flood these offices with calls, including Senator Chuck Schumer and Speaker of the House Nancy Pelosi and the Congressional Arts Caucus members, it's just keeping our agenda on their minds. That's the hope: to direct more information to these offices so they can record that UMAW is active, and hopefully hold them accountable to protect our interests.

So that's sort of the gist of why I got involved, and what I'm saying when I say, "Call a hotline that has my own voice on it to be connected with members of Congress today." We set up a call hotline where I get to be Mr. Moviefone and say, "Hello, we're connecting you now to Chuck Schumer's office, and here's what you should say." And then when you finish that call, you get connected to Pelosi's office, and it goes on and on through not only members of the Congressional Arts Caucus but also your local lawmakers, as long as people feel empowered to keep making calls. We're also asking people to create videos [on social media] saying why they called—and also to say how easy it is to call.

I've always been somewhat politically active since I was a little kid, but it never even occurred to me before a few years ago to call government offices, because I'm so anxious on the phone, and feel like I sound like an idiot every time I talk. But it's totally okay to sound like an idiot. You can call and say two sentences; or you can call and ramble on for two minutes about how you're being impacted directly. It's really, really easy to engage with these offices and have them record that you've said these things, and to have that matter. Especially while we're all at home looking at our screens anyway.

Wisconsin Bars Flooded With Traffic, Or Are They?