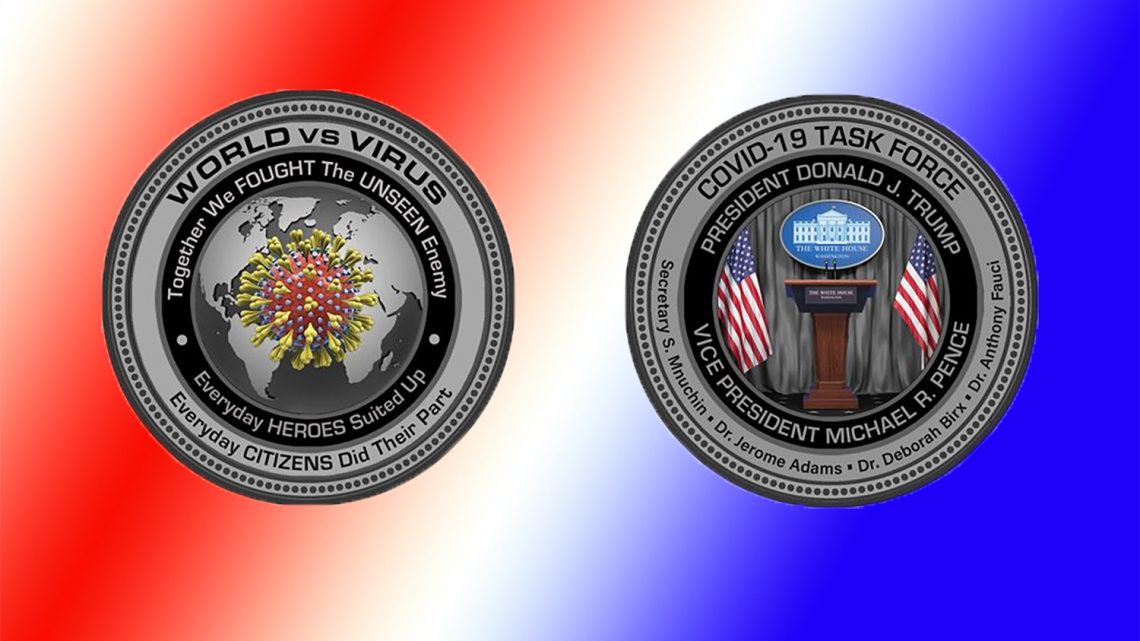 Who the Hell Wants to Buy a Coronavirus Commemorative Coin?

Last week, the internet expressed its collective disgust that the White House Gift Shop had just added a terrifically horrible coronavirus-related commemorative coin to its online store. The $125 collectible features an illustration of the coronavirus on one side, has an empty White House press podium on the other, and is engraved with sentence fragments that sound like rejected lines from Starship Troopers. "WORLD Vs. VIRUS," it reads. "Together We FOUGHT The UNSEEN Enemy."

Although it's true that the coin is a real thing, and it's true that it's maybe not great to "commemorate" an ongoing pandemic that is still responsible for thousands of deaths every single day, this piece of on-brand bad taste wasn't commissioned by President Donald Trump. And despite the illustrations of the White House in its header, the $34.95 "Make America Great Again" hats, and the USA.gov logo on its homepage, this White House Gift Shop doesn't actually have anything to do with the president, either—at least not anymore.

First, the White House doesn't even have a gift shop. The White House Historical Association, a nonprofit, non-partisan organization that was established by then-First Lady Jacqueline Kennedy in 1961, runs its own retail store adjacent to the White House. That shop is only accessible to those who take the official tour of the presidential residence and, because of its nonpartisanship, it skips the MAGA merch in favor of $85 dessert plates with gilded Presidential seals, pastel Vineyard Vines bow ties, and plush versions of former First Dogs.

The online White House Gift Shop still calls itself the "only original authorized" White House gift shop, although that may be somewhere between an oversimplification and a slight exaggeration. The White House did once have its own gift shop, selling T-shirts, golf balls, and other eventual yard sale fodder out of its own basement. The shop had been established as a way to provide financial support to the U.S. Secret Service Uniformed Division Benefit Fund (UDBF). For several decades, it was only available to members of the Secret Service or official guests of the White House, but it moved off-site, launched a website, and opened to the public in the late 1990s.

The UDBF started having some unspecified "financial troubles" in 2011, and the Secret Service contracted Giannini Strategic Enterprises in Lititz, Pennsylvania, to operate the White House Gift Shop website on its behalf. Two years later, the UDBF filed for bankruptcy, and it transferred full ownership of the shop and all of its inventory over to Gianni Strategic Enterprises, which is how the White House Gift Shop ended up in the hands of a married couple in their seventies.

Anthony Giannini trademarked the phrase "White House Gift Shop"—although it took him two tries to get the U.S. Patent and Trademark Office to accept it—and now the very-much-for-profit company brags that it "holds all [...] exclusive rights to its names and variants as well as provides unique works for former Presidents of the United States, U.S. Embassies, virtually all Departments of the U.S. Government, film and television studios, and importanty [sic] patriotic Americans and beloved friends of America."

Some of the gift shop's "unique works" include an ongoing collection of coins that have been designed to "Chronicle in Coin and Ornamental Art the Entire Presidency of President Donald J. Trump in World Historic Acts of Peace Making Leadership." The shop has already created coins for Trump's meeting with North Korean Supreme Leader Kim Jong-un, (including the descriptively named "Not the Vietnam Coin") a coin for the Space Force, and one "symbolizing the genius level thinking skills and proven successes of President Donald J. Trump."

"What I’m trying to do—and I’m going to do this for the next president—is tell the story in coins,” Giannini told Lancaster Online last May. “It’s a coin narrative.” It's also a significant moneymaker: He told the outlet that he sold $10 million worth of coins commemorating Trump's summit with Kim Jong-un.

So that brings us to the coronavirus coin, which was released last week in a limited edition of 1,000. As of this writing, the White House Gift Shop says that all proceeds from the sale of the coins will be donated to "COVID and Blood Cancers Research Institutions With No Deductions + Matching Funds by WHGS," although those details have been changed since the item's initial launch.

In an interview earlier this week, Giannini said that the coin was designed as a way to support Johns Hopkins University Hospital, where his wife and business partner, Helen, is being treated for leukemia. "It is for the above reasons that I was moved to create the COVID-19 memorial coin, WORLD vs VIRUS—with every penny of proceeds donated to Johns Hopkins, two other medical research centers, and some donations to [law enforcement] first responders," he told Snopes. "When accounts settle in May, we will donate $100,000.00 of which Johns Hopkins Medical Center will be a principal recipient."

VICE has reached out to Giannini for comment. In the meantime, if you're concerned that you might forget about coronavirus, you can drop $100 for a coin that will be shipped in June by a private company that averages $7 million in annual sales. Or you could send that same amount to an organization that is helping small businesses, restaurants, or local families hang on during this ongoing pandemic. Totally your call.

Good Masks Are Critical, But How Do You Find Them?
A Colorado Man Reportedly Planned to Join an Anti-Lockdown Protest. Then the Feds Found Pipe Bombs in His Home.