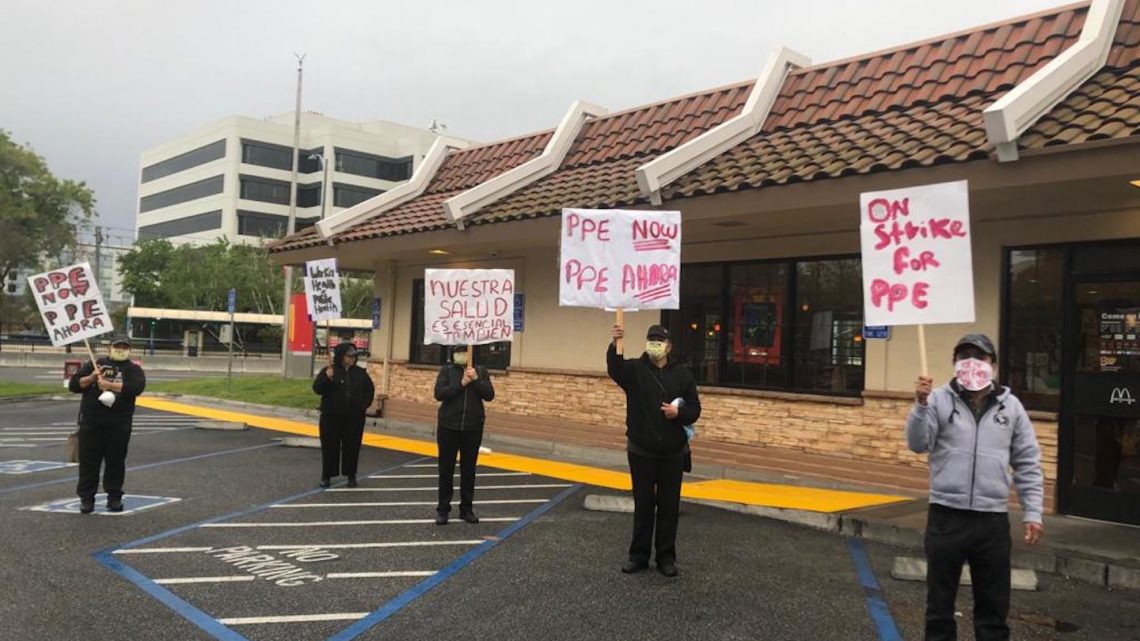 Hundreds of cooks and cashiers at 30 fast food restaurants across California plan to strike on Thursday—demanding that McDonald’s and other fast food chains provide masks, gloves, soap, $3-an-hour hazard pay, and two weeks of paid sick leave to workers exposed to COVID-19.

Workers from Burger King, Taco Bell, Domino’s, Pizza Hut, Subway, Popeye’s, El Pollo Loco, and WaBa Grill will participate in the walkout, which was inspired by two strikes earlier this week at McDonald's locations in San Jose and Los Angeles, where two workers have now tested positive for coronavirus. Organizers at the Fight For $15 campaign, which has helped coordinate Thursday’s strike, say that this is the first time they’ve seen spontaneous walkouts in nearly eight years of the movement. Typically, it takes months to plan something of this scale.

“I’m very afraid for my life and the life of my daughter who also works at McDonald’s,” Maria Ruiz, a 46-year-old cashier at the McDonald’s location in San Jose who has been on strike since Monday and will participate in Thursday’s action, told VICE in Spanish. “Workers are scared of retaliation but we’re not going to wait for one of us to die or get sick with the virus.”

Verli Godinez, a worker at a McDonald’s location in Los Angeles who tested positive for coronavirus, said she was particularly upset when she learned about her positive test on Wednesday because McDonald’s had not provided her with protective gear or communicated quickly enough with employees when they found out another worker had tested positive earlier this week.

“I decided to go on strike on Sunday because I was afraid of getting sick, and now I know my fears were founded,” Godinez told VICE in Spanish. “McDonald’s should be responsible for paying every worker at our location to quarantine.” Godinez said her McDonald’s franchise owner will be paying her two weeks of sick leave.

On Thursday, strikers from many of the participating chains will converge in their cars at “drive-in” picket lines at McDonald’s locations in Los Angeles and Oakland, and then a virtual Zoom picket line later in the day.

The fast food strikes coincide with a growing wave of strikes, walkouts, and “sickouts” led by frontline workers across the country. In recent days, Instacart, Whole Foods, General Electric, and Amazon and Barnes and Noble warehouse workers have protested and walked off the job demanding paid sick leave and more protections at work. The actions, some of which are spontaneous and all of which have been planned quickly, are beginning to look more and more like a general strike.

Following recent strikes at McDonald's in California as well as Memphis, Miami, Orlando, Raleigh-Durham, and St. Louis, the fast food giant said it would provide masks and gloves to workers and increase cleaning and social distancing policies. Workers at locations in San Jose and Los Angeles say they’ve yet to receive any protective gear, despite repeated requests from workers.

“McDonald’s hasn’t provided for us what we need to be safe at work,” Bertolome Perez, a McDonald’s cook in Los Angeles, where two workers tested positive for coronavirus, said in Spanish. “We work without masks. There’s no hand sanitizer.”

Perez, who has worked at McDonald’s for 30 years and makes $14.25 an hour, said that he was unable to secure a coronavirus test because of his age, but believes he crossed paths with a sick coworker during a shift change. “McDonalds hasn’t given us any training or advice on how to work during the pandemic," he said. "We are scared and people are going to work sick because we’re afraid to lose our job.”

Nearly a quarter of McDonald’s workers say they’ve worked while sick during the pandemic, according to a new survey of 800 McDonalds workers conducted by the Service Employees International Union. The survey also found that roughly half of workers have been discouraged or banned from wearing face masks or gloves.

McDonald’s did not immediately respond to a request for comment about the strike.

Somebody Is Leaving Porn-Filled Easter Eggs in Florida Mailboxes

Fred Singer the Good (there is lots of bad and ugly)