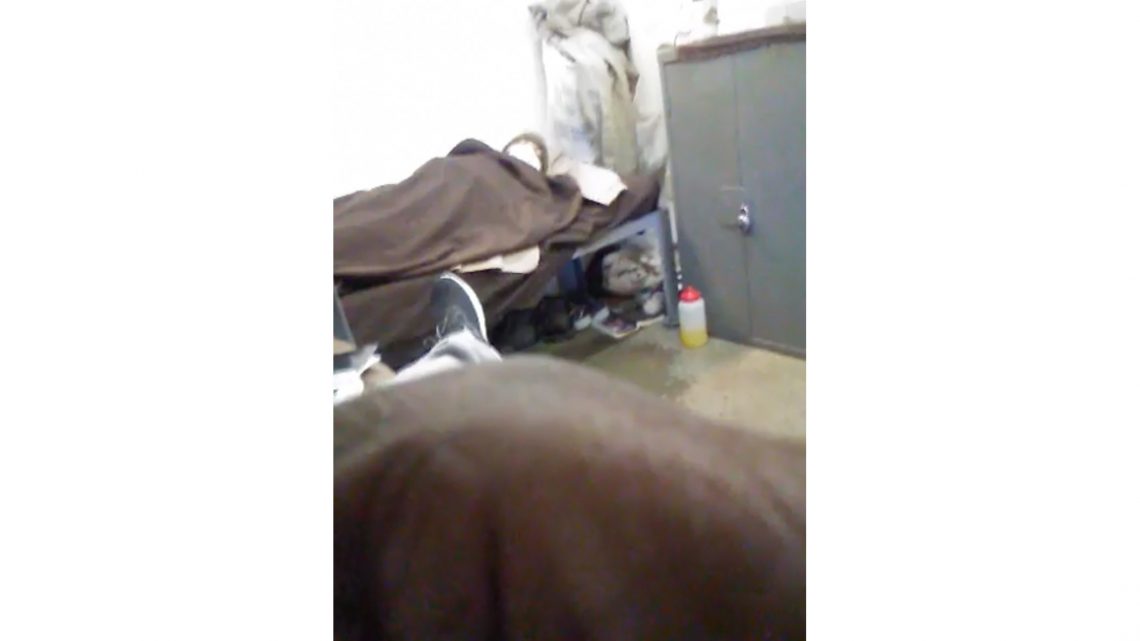 The video begins with a man wearing a surgical mask and a stocking cap staring directly into the camera. The footage is blurry and vertical, like it was filmed on a cellphone.

“Shit you know I don’t even know how to start this,” he says. “Shit was all good like a couple days ago, right? So all of a sudden, out of the blue, fucking everybody just fucking dying and getting sick and shit. Like, this shit serious as fuck. Like, they literally leaving us in here to die.”

VICE News has identified the man as 31-year-old Aaron DeShawn Campbell, an inmate at FCI Elkton, a federal prison in Ohio where three people have died from COVID-19 over the past week and at least 20 others are currently hospitalized.

The video, posted publicly on Facebook Live on Friday afternoon from an account with the name “Ace Sanchez,” was a desperate plea for help by Campbell, who was willing to risk showing his face and admit to possession of a smuggled cell phone in order to alert the public about the dire situation inside his prison, his brother and and mother told VICE News.

In the video, which runs for over 20 minutes, Campbell films the inside of his housing unit, showing men lying down on bunks who he says are sick with coronavirus symptoms. He says a prison nurse recently told him “half the unit is about to die.” He also records a courtyard in the prison and points out a tent on a basketball court that he claims was set up to store the bodies of men who died from COVID-19.

Bureau of Prisons spokesperson Sue Allison told VICE News the video “is currently under investigation,” and denied that Campbell or other men shown in the video are sick.

“We can confirm that after identifying the inmates in the video, none of them were symptomatic of COVID-19,” Allison said in a statement.

Joseph Mayle, a correctional counselor at Elkton and the president of the union for the prison’s staff and guards, would not “confirm or deny” that footage was shot inside the prison, but he rebutted specific claims made by Campbell.

"The tent on the basketball court at first was going to be a testing area to take inmate temperatures for isolation,” Mayle said. “However, they did not do anything with that tent, the inmates were just going straight to isolation so the tent is empty. There are no dead bodies. There never were any dead bodies. There have been inmates who have passed away, but they were in the hospital.”

A former Elkton inmate, who was released last year, confirmed the authenticity of the video to VICE News, saying the tent appeared to be on a basketball court inside the facility, next to the prison medical center and the “Special Housing Unit” where inmates are isolated. The source said it appeared Campell was housed inside F Unit at the low-security prison, which is an “open dorm with cubicles” instead of cells. Photos posted previously on the “Ace Sanchez” account showed a man closely resembling Campbell inside what appears to be a prison.

The BOP confirms seven cases of COVID-19 among inmates at FCI Elkton, a low-security prison with a minimum-security “camp” housing around 2,400 inmates total. Two staff at the prison are also confirmed to have the disease, according to BOP. But according to Mayle, three staff are positive, 15 inmates are in quarantine with symptoms, and 82 are in isolation.

“You can literally be talking to somebody one day and messaging them and then the next day they’re dead.”

In the video, Campbell — a Detroit native who is serving an eight-year prison sentence for selling crack cocaine in West Virginia — says the cramped quarters inside Elkton, where men sleep in dorm-style housing units, make it impossible to practice social distancing.

“This motherfucker over here dying of corona,” Campbell says at one point, turning the camera to his cellmate, who is lying down and wearing a surgical mask. “They got this motherfucker in my room. How the fuck am I supposed to live? They talk to us about staying six feet away, they give us these little masks, but they literally like leaving us in here to die.” 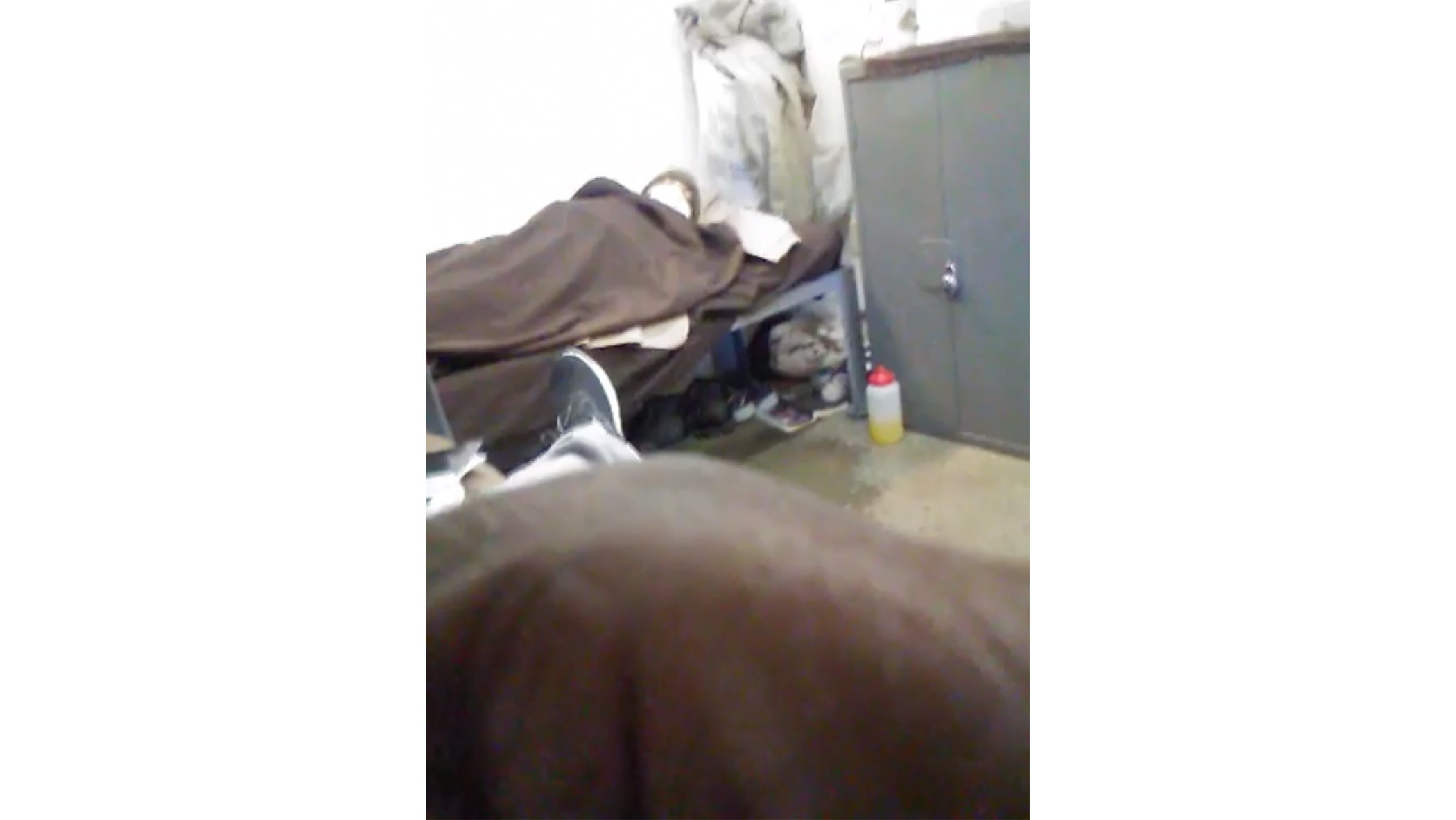 A screenshot from Aaron Campbell's video.

He adds later: “Everybody in the unit got this shit except three or four of us.” Campbell says in the video that he feels fine, but he also complains at one point of losing his sense of taste, which is a symptom of COVID-19.

Mayle, the union chief at Oakdale, disputed Campbell’s claims. "Pretty much everything he said is untrue,” Mayle said. “No health service professional is gonna tell an inmate he's going to die. The inmate he's housed with is fine."

Campbell’s younger brother Adrian, who works as the manager of a housing complex in Florida, told VICE News he spoke to his brother by phone on Friday afternoon just before the video went live on Facebook. Adrian said his brother was willing to go public even though he would likely be punished by prison authorities for having a “jack,” or contraband phone. Adrian said he received word from a friend on Sunday that his brother had been placed in “the hole” as punishment, but that information was not confirmed by prison officials

‘It was pretty much like, ‘Oh my god, shit is getting crazy in here,’” Adrian recalled his brother saying. “‘I’m about to try this, they might take the jack but fuck it.’ He said he needed to get some notoriety to the situation because they was ignoring everybody.” 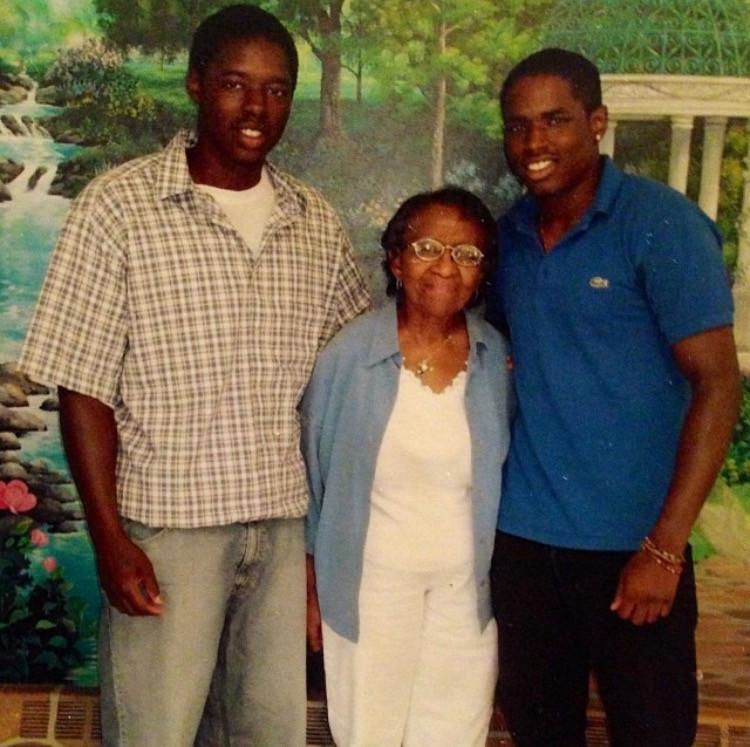 Adrian said that in a conversation earlier in the week, Aaron said he had virtually no information about the coronavirus, including the symptoms and high risk for infection inside prisons and jails. In addition to the three men who have died from COVID-19 at Elkton, five inmates at FCI Oakdale, a low-security prison in Louisiana, have also died over the past week. The BOP now confirmed 120 cases among federal inmates nationwide, though the agency acknowledges that the actual infection count is likely far higher because only the sickest prisoners are getting tested.

“I had to clue him into pretty much like all the specifics about the corona situation,” Adrian said. “In a week's time after, he said that it got heavy and hectic in the jail, people started getting sick and dying. He sounded real nervous about the situation.”

Adrian said he hasn’t heard from Aaron since the video was posted, despite efforts to contact the prison and get an update.

“It’s like the whole system just shut down,” Adrian said. “You can’t even get through on a line. I didn't think [posting the video] would work but he said anything better than nothing. They just left him in the cell for days at this point with nothing but a little face mask.”

READ: Inside the federal prison that's ‘ground zero’ for the coronavirus outbreak.

Aaron and Adrian’s mother Sherry Campbell, who works as a nursing assistant in Detroit, said she recently tested positive for COVID-19 herself, likely contracted while working in a hospital ICU. Detroit hospitals have been overwhelmed with coronavirus cases in recent days, and health officials currently report 4,000 confirmed infections in the city with 129 deaths. Sherry said she was on her eighth day of home quarantine, and she coughed several times during a phone interview.

Sherry said she spoke with Aaron last week, and he told her that “a lot of people had shortness of breath, they were coughing, they couldn't taste or smell anything.”

Sherry also expressed frustration at how the BOP has handled the outbreak. The agency has publicly touted its response, which has included halting social visits and placing prisons on lockdown to restrict inmate movement. But multiple sources, including current correctional officers and prisoners at several facilities, have told VICE News that not enough is being done. New inmates continued to arrive at federal prisons as recently as last week. Staff complained of working up to 32 hours straight and being told to come to work despite being exposed to sick inmates.

In his video, Aaron Campbell references an inmate at Elkton named Woodrow Taylor who died last week from COVID-19. The BOP confirmed Taylor’s death Thursday, saying the 59-year-old fell ill on March 31 and was hospitalized and placed on a ventilator. He was serving a 5-year sentence for a cocaine conviction. The two other Elkton inmates who died were identified as 65-year-old Margarito Garcia-Fragoso, who was imprisoned for cocaine and gun convictions, and 79-year-old Frank McCoy, who was serving a 10-year sentence for child pornography.

Campbell tells viewers at one point in his video, “I got less than a year left, I don’t want to die in this bitch.” He pleads to be granted early release, which court records indicate he would qualify for under the CARES Act, federal legislation that allows inmates at high risk of death from coronavirus to serve out the remainder of their sentences on home confinement. Federal prison wardens also have authority to grant certain inmates early “compassionate release.”

READ: Thousands of pre-trial detainees are at risk of coronavirus just because they're poor.

On Friday, Attorney General William Barr issued a memo ordering the BOP to speed up early releases of inmates from prisons most affected by the coronavirus outbreak, specifically naming FCI Elkton, FCI Oakdale, and another federal prison in Danbury, Connecticut.

Campbell worries in the video that his family will get a phone call from prison authorities saying he died: “They going to be like, hit your parents and say like, ‘He caught corona and there wasn't nothing we could do about it. But there was something you could do about it. You got the CARES Act, you got the compassionate release.”

Adrian Campbell said his older brother has severe asthma, which they believe came from growing up in an industrial part of Southwest Detroit. The condition is so severe that Aaaron could not play sports when they were growing up. He said his brother was a good kid who turned to the drug trade to escape poverty.

“The downfall for him was materialism,” Adrian said. “You get addicted to that life, you want the newest shoes, the newest pair of Jordans, Cartier glasses — you want to portray this successful appearance so you turn to drugs for fast money.”

He said his brother is an avid reader who studies the history of successful entrepreneurs such as John D. Rockefeller, Andrew Caregie, and J.P. Morgan. “You look in his cell he’s got nothing but books by Warren Buffett about Berkshire Hathaway and all that stuff,” he said. “He’s a good guy with a good heart in a bad situation.” According to court records, Campbell was arrested in Morgantown, West Virginia in June of 2015 after selling an undercover informant 1.25 grams of crack and 1.12 grams of heroin. BOP records indicate he is scheduled for release in 2023. 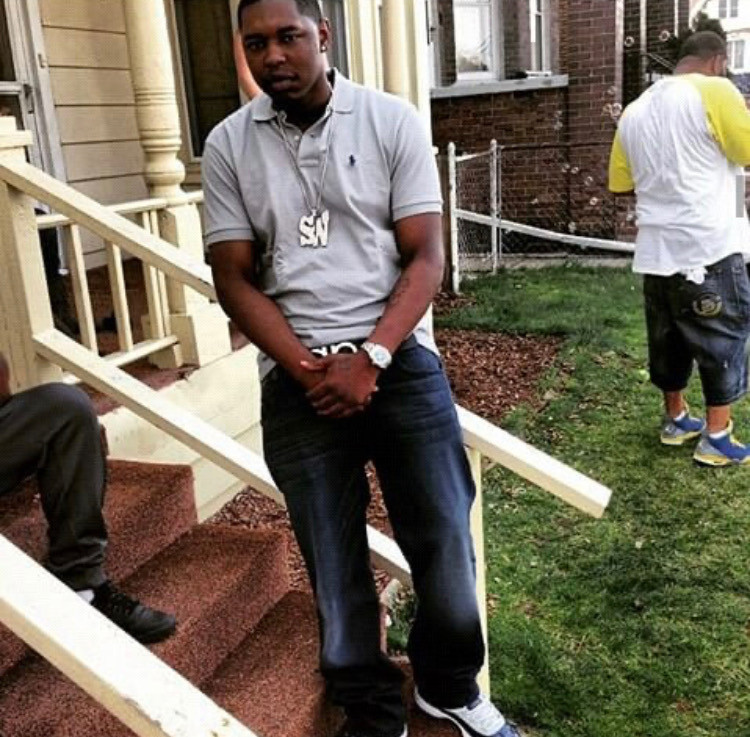 Campbell’s mother and brother both worried that their loved one was now facing a death sentence by being stuck in Elkton. Campbell himself said as much in his video, describing how he only received the flimsy mask for protection and a small bottle of soap for cleaning supplies, which was supposed to last him two weeks.

According to Facebook, Campbell’s video had been shared over 6,000 times and viewed by 88,000 people as of Sunday afternoon. He asks repeatedly for viewers to share it and contact media outlets.

“This is for prison reform,” he says. “Don’t let nobody else fucking die like this.”

Cover: A screenshot from the video shared by Aaron DeShawn Campbell.

Coronavirus Deaths: How Badly Undercounted Are They?