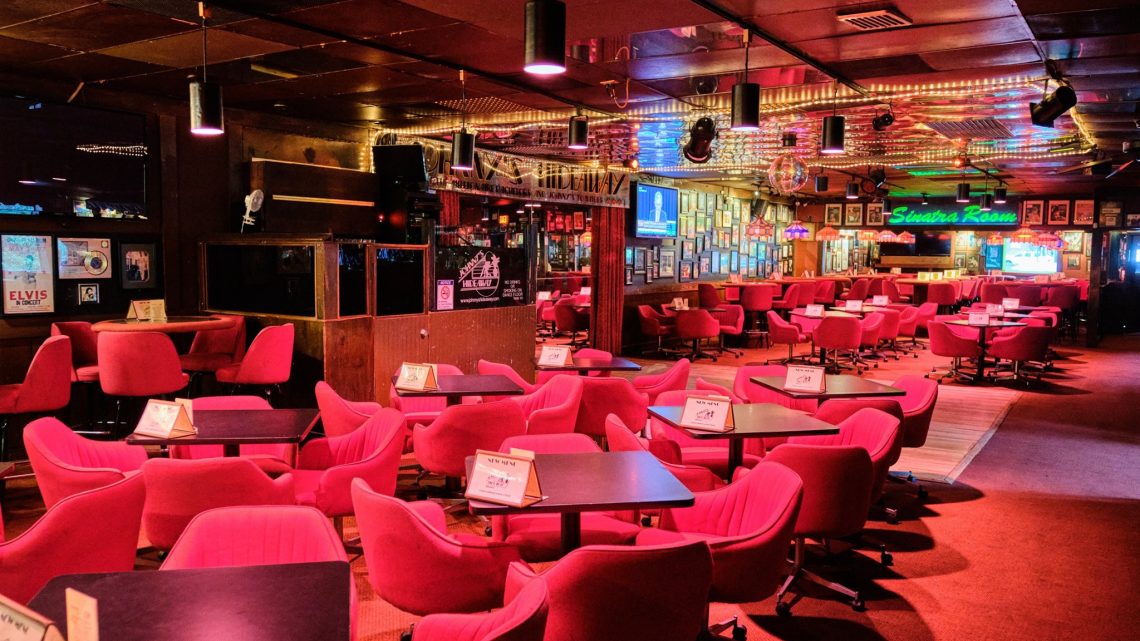 Every time Bambara heads home to Atlanta, they spend a night at Johnny's Hideaway. The noisy post-punk trio, made up of brothers Reid and Blaze Bateh and William Brookshire, doesn't get down there as often as they used to; after forming in Athens, Georgia, they moved up to Brooklyn, where they've lived for just shy of a decade. They made three albums in their adopted home—getting signed, drumming up buzz, and going on tour with bands like IDLES and Daughters in the process—before deciding to trek south and hole themselves up in a remote cabin outside of Athens to record their latest, Stray, released this February.

Their off-days in Atlanta left them with time to hit up Johnny's, a gritty, legendary Atlanta bar that's been open since the late 70s. The place is decorated like a low-budget Rainbow Room, tends to draw an older crowd, and blasts disco music day and night—an unlikely hangout for three Brooklyn transplants who make dark, gloomy songs with titles like "Death Croons" and "Sunbleached Skulls." But Bambara loves it.

For this installment of I Know a Place, we talked to Reid, Blaze, and William about what makes Johnny's Hideaway so great—and why, over anywhere else, a seedy little dive at the end of a strip mall is their favorite bar in Atlanta.

VICE: How long have you been going to Johnny's Hideaway, and how did you first discover it?
Blaze Bateh: When we went back home for Christmas, we went over there just for the fuck of it and we were blown away.

Reid Bateh: It was many, many years ago. We've been on numerous Christmas nights, and it's always a great time to be there. Just the saddest, loneliest people.

BB: I think the first time we went is when we saw this dude passed out in his chair with these two… possibly hookers? I'm not sure.

RB: I mean they definitely were. 100 percent.

BB: It was like this really old, sad businessman passed out in a chair with his head back, and he had two—I mean, they were definitely prostitutes—one on each knee, and they were both pouring drinks down his open mouth while he was passed out and laughing at how fucked up they were getting. It was amazing.

BB: Yeah, like, from the 70s. They have this place called the "Sinatra Room." I think the owner was friends with Frank Sinatra.

RB: Yeah, he has pictures of him shaking his hand and shit around the bar.

BB: One of my favorite things about the place is they have these four—or maybe it's two—flat-screen TVs that play a slideshow of just actors, without any kind of connection [to the bar]. You'd think it would be a bunch of old timey dudes—because it is, at first—and then randomly it'll be like Joey from Friends. And they're right next to, like, Humphrey Bogart. It's also known as a cougar bar. 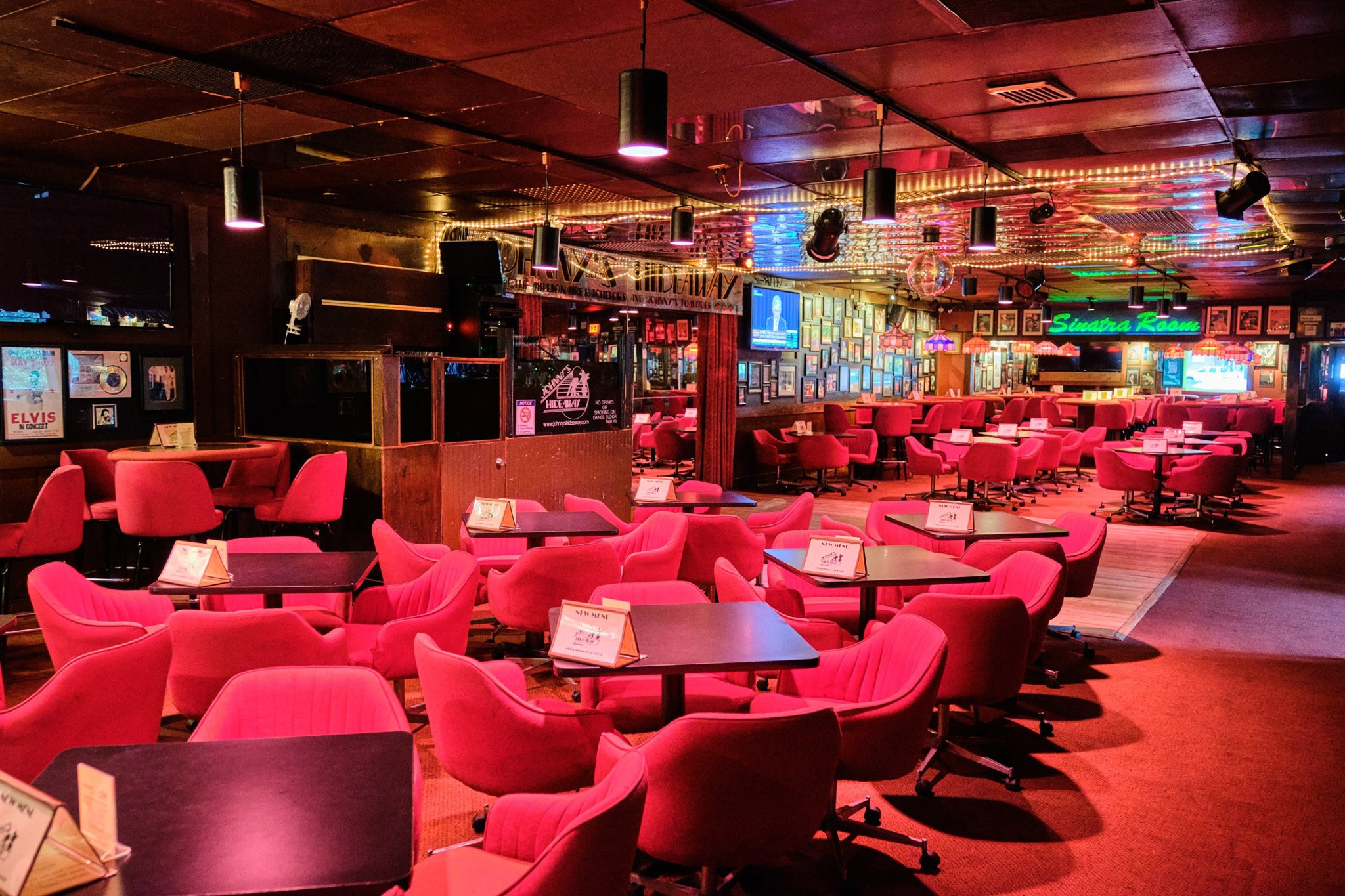 All photos of the bar via the Johnny's Hideaway Facebook page

How is it that you know that? Is it just flagrant?
RB: It's pretty flagrant.

BB: Well they have shirts there that say, like, "Johnny's Hideaway cougar." A lot of older, divorced people go there, so it kind of lends itself to those possibilities. I went to the Johnny's website before this call, which is amazing in itself. It looks like it was designed in, like, '97 or something. But their unofficial slogan is: "Got Cougars?"

RB: Oh shit, that's the shirt! Even that is like a 90s ad campaign.

BB: Yeah. Something happened to them. They had, like, an identity crisis in the 90s.

Can you guys paint me a picture of what it's like to walk inside?
WB: It's next to like a Supercuts or something. It feels to me like you're walking into a third-string casino. Like, well off the strip in Las Vegas.

RB: Oh yeah, totally. And it's carpeted, really dark. People smoke in there.

BB: There's two wraparound bars. The bartenders have been there forever. They dress up, a little bit, in nice clothes. What else?

RB: There's a dance floor right next to the bar.

WB: Big disco ball on the dance floor. There's strip lighting around the underside of, like, any surface.

BB: The carpet is a really nice feature, because you can tell it's been there since day one, and it's just kind of absorbed all of the things that have gone on.

What kind of people hang out there?
BB: It is predominantly, historically for older people. 40s and up. Way up.

WB: Older singles. People don't really come as a couple ever. There's a lot of looking around, and you can see everybody floating slowly towards each other. You'll see older guys with call girls, or you'll see the one or two frat dudes try to sidle up to cougars. Just watching the drama unfold is really something.

BB: On the weekends, there's a line out the door, and a bunch of frat boys and stuff. The regulars are still there. They're just mingled in with everybody. When it's really busy, the DJ has to interject like every 20 seconds to not take drinks on the dance floor.

RB: It's such a losing battle. It's hilarious.

BB: He literally has to say that like 20 times a song. Everyone's so fucked up they can't even hear what he's saying. Which must mean he's watching everyone's hands like a goddamn hawk.

RB: On a weekday night the dance floor is still going, but it's usually just a few people dancing. It's a more somber vibe. More reflective, in a way.

WB: A nice cougar might invite you to dance on a Tuesday night.

BB: And there's a lot of space at the bar, too. You can sit wherever you want. Get the best view of the slideshow. 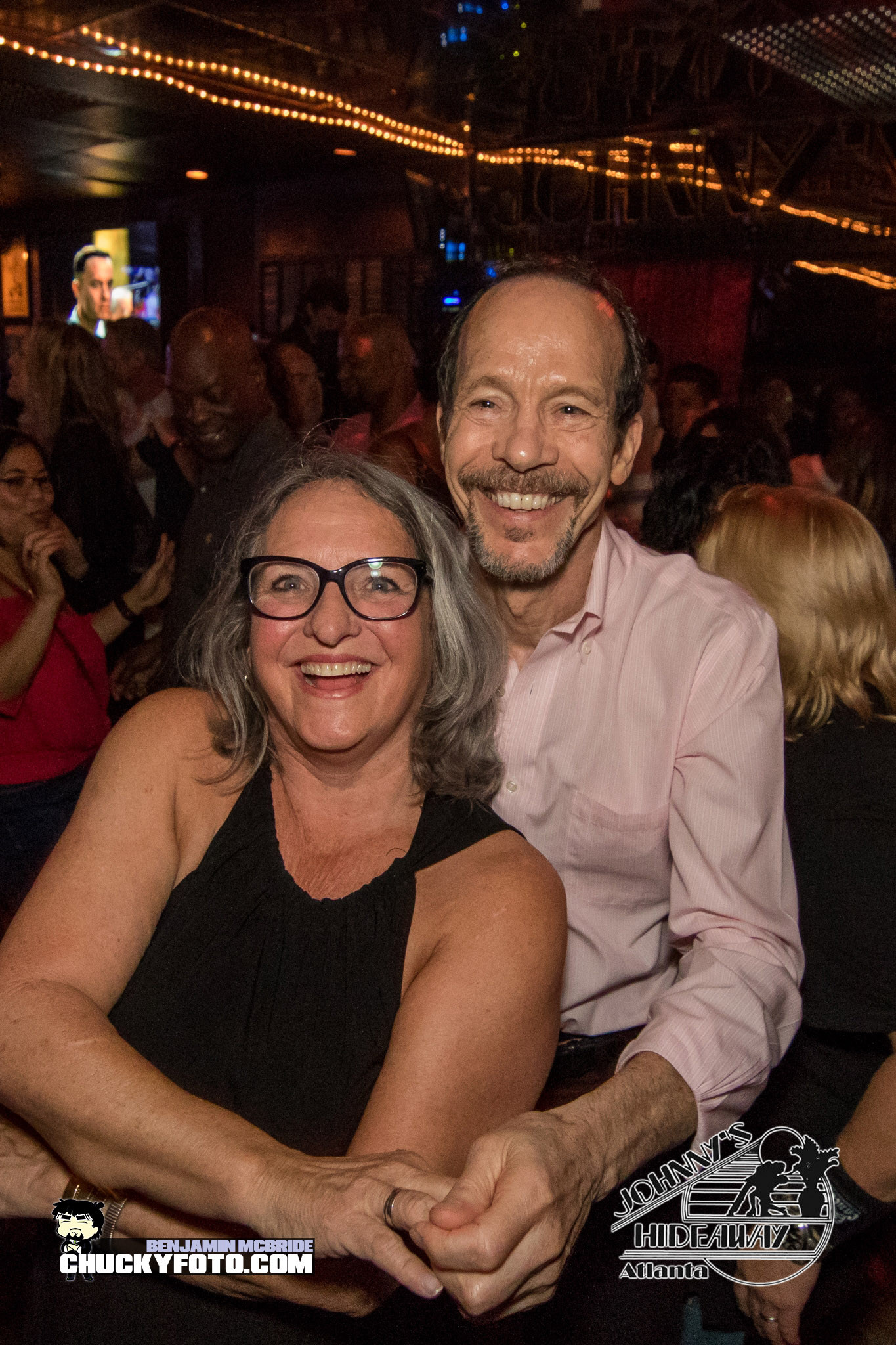 Can you describe one of your favorite nights there?
BB: Well the problem is, if they're that good, I don't remember 'em. Which is becoming a sad trajectory in my life, really. All the best times I don't fuckin' remember.

RB: We had a good time with our friends, this band IDLES, who were in town from England. It was the first night of their tour in the States and we took them to that bar. They loved it, because they could smoke inside.

BB: What did Joe say about it? He said he had to go get tested the next day just from being in that place.

What kind of music do they play in there?
RB: A lot of 90s. Sometimes you'll hear La Bouche, or that whole Night at the Roxbury kind of stuff. That early 90s electro-Euro dance stuff.

BB: A lot of that mixed in with a shitload of disco. And then there's a constant loop of the dude telling people not to bring drinks onto the dance floor. It's like its own song.

What about Johnny's feels uniquely Atlanta to you?
BB: A bar like that couldn't really exist in the New York that I've experienced. It's just so many different walks of life, all in one place. And maybe just the Southern nature of it—everyone is a bit more friendly, outwardly. You don't feel any friction. There's a wide range in ages and ethnicities and everything. It's awesome.

WB: The difference in age, and the interaction between young and old—not being family, not being friends, necessarily—that's just something I don't see anywhere. And that's part of what's so amusing about it, too. Like, watching this cougar try to trap a young guy.

BB: A lot of the young dudes, I think, even come there for that reason.

What do you think the future holds for Johnny's?
BB: [If it closed], I think it would be a sort of a bittersweet thing. I would be sad that it was gone, but it would almost be like it died fighting for its own cause or something. Trying to stave off the bullshit.

RB: It refuses to change in any way. The awning, the sign—everything about it. There's nothing they do to entice [customers]. They want to be hidden. They want the secret to be kept, you know.

WB: I'd almost rather they get scraped out of the place than try to change with the times. I think that would be the biggest bummer.

A Love Letter to the Dank Immigrant Parent Meme