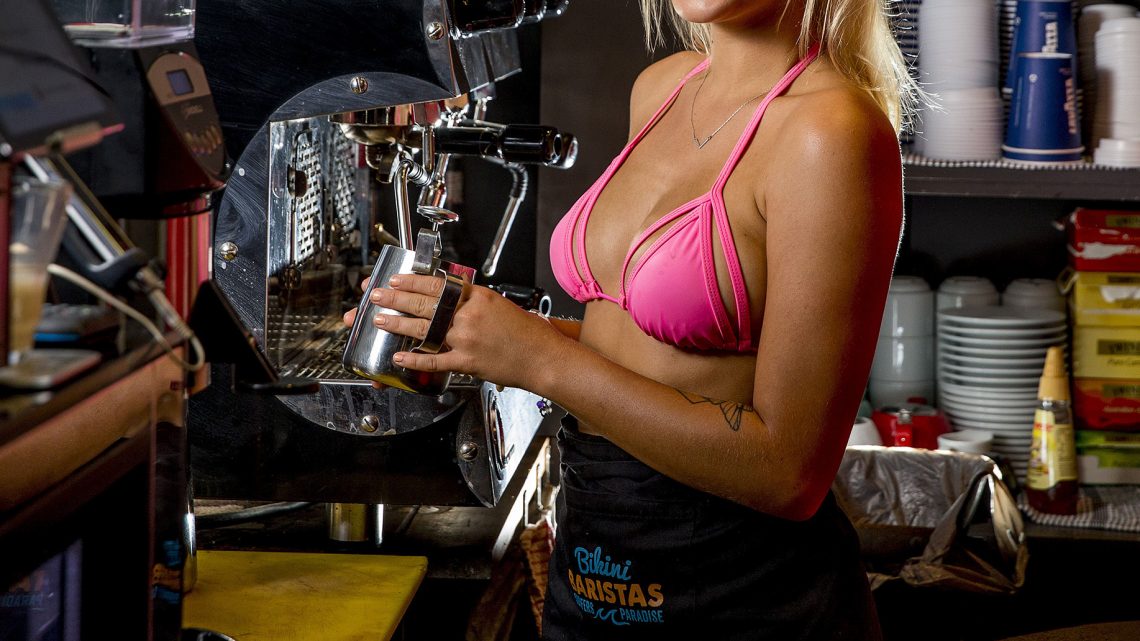 Several years ago, the cops in Everett, Washington conducted an investigation into some of the 'bikini barista' coffee stands that were scattered around the city, after local residents complained that the swimwear-clad servers were giving customers more than just cafe lattes.

In 2010, five women who worked at a Grab-N-Go coffee stand were arrested on prostitution charges, and for violating Everett's adult entertainment ordinance after they were busted performing a variety of acts for money, including "exposing their breasts and privates and licking whipped cream off of each other." Three years later, three more women were arrested at the same stand, after undercover cops caught them on camera allegedly performing "shows" without serving any hot beverages to their so-called customers.

Later that year, two more baristas from the Hillbilly Hotties stand were arrested after another undercover investigation. "They were performing not sex itself, but just performing actions and activities which are unacceptable within the community," an Everett cop told the Associated Press at the time.

Although those investigations took place in 2013, some of the surveillance footage that was recorded by officers is still at the center of a legal battle between a sex offender and the Snohomish County city.

According to KUOW, a man named Jamie Wallin has requested some of the documents from the case, as well as digital footage that was filmed at the time. Normally, that information might be released to a citizen who made a public records request—and indeed, the Everett Police Department previously told Wallin that he could watch the footage on-site at the police station, and even take screenshots if necessary.

But Wallin can't make it to the station, because he's a convicted sex offender who is currently serving two life sentences at the Washington State Penitentiary in Walla Walla. He has been trying to get this footage since at least 2017, and Everett city officials have been fighting his request just as long. “The Court should not feed this repeat sex offender’s perversions by allowing him to obtain copies of video files that feature young women stripping and engaging in sexual conduct,” the assistant city attorneys have previously argued.

Representatives for the city have argued that releasing the videos would be in violation of the baristas' right to privacy—and they have also worried that the women would file their own lawsuits if the footage were to become public. Everett officials have also suggested that Wallin is just "harassing" officials in the hopes that he'll be awarded some kind of penalty; even if he could legally acquire the videos, the Everett Herald has reported that the prison wouldn't allow him to possess them anyway.

The problem was that, in addition to undercover footage of the women allegedly stripping and engaging in sexual acts, the videos also depicted a now-former Snohomish County sheriff’s sergeant in full uniform while in an "intimate embrace" with the baristas; the disgraced officer was sentenced to a year in jail for money laundering and official misconduct after tipping off coffee stands' owner about ongoing investigations.

After the judge's ruling, West was reportedly given access to the videos —with the agreement that he wouldn't put any of the clips online—in addition to a reported $45,000 settlement with the city.

In Wallin's case, he continues to argue that the city is discriminating against him due to his status as a sex offender, and due to the fact that he's in prison. The city is due to submit yet another legal brief next week.