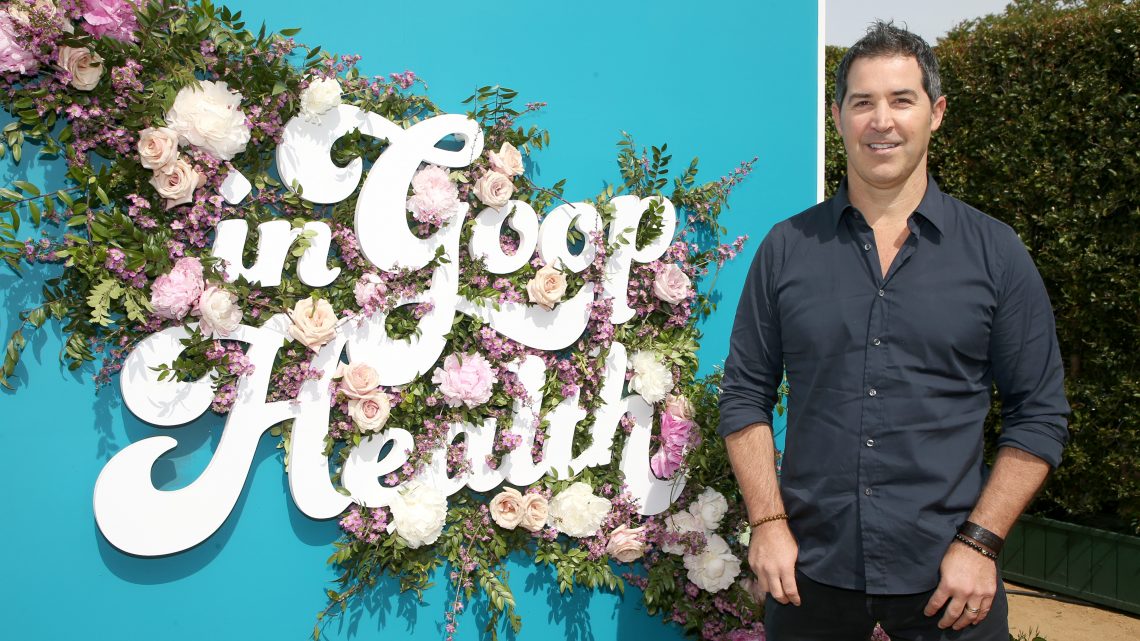 It seems safe to say that 2020 has already been John Amaral’s lucky year. The California-based “somatic energy practitioner” and chiropractor says he’s been in practice for over 25 years, but this month proved to be Amaral's breakout moment, when his methods were featured on Gwyneth Paltrow’s new Netflix program The Goop Lab, which focuses on alternative treatments and provides a visit to the furthest reaches of credulity. Simultaneously, Amaral went lightly viral when he performed an energy healing treatment on dancer Julianne Hough at the World Economic Forum last week, an incident that seemed to involve a cathartic level of writhing and howling on her part. (Why any of this was taking place at Davos is sort of an open question, but also, you know, why not.)

Amaral, who says he learned his skills from another energy practitioner named Donny Epstein, touts two proprietary programs, dubbed the Energy Flow Formula and Body Centered Leadership. The general idea is that energy can be directed around the body in a manner that encourages it to heal itself. (It sounds a lot like Reiki, but Amaral’s website assures his potential clients that it is not Reiki: “Reiki is a spiritual healing art of Japanese origin in which the practitioner directs 'universal life energy' into a person’s body using specific hand placements to help their body heal. Unlike Reiki, somatic energy healing incorporates specific physical, emotional and mental practices to help people increase self and body awareness and change behavior patterns.”)

Amaral is a longtime friend of the Goop business: He was featured on a panel last year at the In Goop Health summit in Los Angeles, their version of a wellness conference, and that "pretty goopy conversation" was aired on their podcast. In it, at the 42-minute mark, he recounts what sounds like a claim to have treated a woman’s knee pain shortly before she was scheduled for surgery: “I just had her put her hands on her knee and have a relationship and a dialogue with her knee and she just started sobbing. She was like, ‘It already feels like it’s been replaced'… She’s like, 'Oh my god I can move it.' She canceled the surgery and she was out golfing like three weeks later.'

In his Goop Lab segment, Amaral is also shown practicing his form of energy work: He hovers his hands over various obliging, athletic wear-clad Goop staffers in a sunlit room and, in response, they grunt, moan, contort their bodies and, in general, look like they’ve been ecstatically exorcised inside a Lululemon.

“The first time John worked on me, I really just cried,” Paltrow confides, in a voiceover. In his own narration, Amaral adds, “The entire universe is made of energy… the human body has an energy field and we’re processing the world through it. The more connected you are energetically, the healthier you will feel.” (Neither Amaral nor Goop responded to a request for comment from VICE.)

This is all nonsense, of course, but it’s a relatively harmless variety. (It’s also not to dismiss the possibility of alleviating bodily pain through non-medical, non-surgical methods like hypnosis or cognitive behavioral therapy, some of which are being studied.) But in addition to bringing actors-turned-wellness gurus to tears, Amaral has made more grandiose claims about what his work can do: In a 2018 interview, he strongly implied that his methods could make breast cancer disappear.

The interview was with an “SEO expert, author and professional speaker” named Stephan Spencer, and together, the two men enthusiastically agreed that energy is a wonderful and lucrative thing. Amaral touted his work with Tony Robbins, his most famous client pre-Paltrow. (This is a connection he might not currently want to emphasize, given that Robbins has recently faced multiple accusations of sexual harassment, which Robbins denies. Robbins has pledged to sue BuzzFeed for their multi-part investigative series on the allegations against him.)

“I’ve been able to have many mystical experiences where I know for a fact, in every cell of my being, that the world is not a solid, structured place,” Amaral told Stephan. “The body is not solid. Everything can change. Everything can shift in an instant. All we need to do is shift our consciousness, our awareness level, and shift our energy state.”

Many things are possible. Cancers can be gone in an instant. I’ve had patients that I’ve worked with where they had been diagnosed with breast cancer. They were on my table and there was a shift. They felt themselves shifting to a different reality where that nodule was gone. They looked for it and it’s gone. They would go in, get tested and it’s not there. They’re like, “What happened?” Spontaneous remission. They literally flipped, in my experience, into a different version of themselves. In that reality, they did not have cancer. I’ve experienced things like this many times working with people. It’s been validated by testing and science.

The subject of promoting medically irresponsible pseudoscience is, of course, a sensitive one for Paltrow and Goop: the company has faced endless and well-founded accusations that it provides a cozy platform for nonsensical or even dangerous health fads, particularly ones marketed to women. Goop was fined $145,000 for making specious claims about jade eggs meant to be inserted in the vagina, though the company continued selling them until as recently as 2018. (They’re now listed as unavailable.)

So you’d think Goop would be especially careful about the ideas it’s promoting. But they’ve chosen, seemingly, another way, running a disclaimer at the top of each episode stating that the show is “designed to entertain and inform—not provide medical advice," much like the one that appears below articles on their website.

Yet The Goop Lab provides Amaral a less-than-skeptical platform, and even broaches the idea of his energy work’s ability to heal or ameliorate disease. In a friendly chat with Paltrow and Elise Loehnen, Goop’s chief content officer, Amaral explained how his treatments work, in his view.

“I show up and influence how energy is moving so your body can heal faster,” he explained.

“Do you find in your practice that you see people who have diseases and that through the energy work thing start to shift?” Loehnen inquired.

“Yeah for sure,” Amaral responded. “So I’m not treating a particular condition when I'm working with people, but I have a hypothesis. If you just change the frequency of vibration of the body itself, it changes the way the cells regrow, it changes how the sensory system processes.” (Speaking of her own Amaral experience, Loehnen beamed, “I had an exorcism.”) During the conversation, the Goopers and Amaral were joined by an osteopathic physician named Apostolos Lekkos who supported Amaral's claim that therapies that are "manipulating the energy field of a person" are beginning to "manifest in our medical system." Lekkos is another longtime Goop favorite.

The disclaimer notwithstanding, The Goop Lab still feels like a sunny, unfocused infomercial that’s resolutely pretending not to be one. It’s unquestionably a sizeable business opportunity for healers featured on the show; in addition, Amaral was also featured in an article on Goop’s website that seems designed as both an advertorial for his services and for the show.

The article, though, undated, seems to have been published at the beginning of 2020. It promotes Amaral’s appearance on the show, and adds, “[I]f you’re curious for more, he’s developed a free seven-day challenge where you’ll go through each of the energy centers and learn how to use the Energy Flow Formula.” (There, too, Amaral is not shy about his work on treating physical symptoms, though he goes short of explaining what precisely energy does to them: “People who come to me with physical symptoms might be getting migraines, or they’re grinding their teeth. They have tension in their jaw and neck. Maybe they have some anxiety, and they feel as if they’re constantly navigating an anxious feeling or an ache. I’ve worked with amputees, people with spinal cord injuries, and people who’ve had severe ankle sprain from an auto accident, for example.”)

In the piece "Who Really Shines in the Goop Glow?" the Wall Street Journal pointed out that Amaral prepped extensively for his close-up:

To prepare for his television debut, Mr. Amaral revamped the website for his practice, where one-on-one sessions go for $2,500, and he set up a free seven-day online challenge for fans who Google him after the show. The 47-year-old body worker and chiropractor moved to Los Angeles a year ago after meeting Ms. Paltrow and now is seeking a trademark for his EFF, or Energy Flow Formula, which he says can be used to treat a range of illnesses.

Amaral also seems ready to respond to criticism. His website bears a large banner—though it's unclear when it was added—reading:

Disclaimer - John Amaral does not claim to diagnose or treat any specific conditions. This approach is not a means of diagnosing or treating any condition, physically, emotionally, mentally, psychologically, or spiritually. This approach is intended educational and designed to increase self and body awareness, so that the individuals working with him whether on the table or through self-directed exercises or processes can develop new capacities in their body for the identification of, spontaneous release of, and redirection of energy.

Elsewhere, in his FAQ, Amaral insists his services are not meant to replace medical advice: “Incorporating the Energy Flow Formula into your life may provide noticeable benefits to your physical and emotional health, but it is not intended to replace medical treatment or cure diseases or conditions.”

That is, of course, legally what Amaral must, and should, say. But it’s difficult to come to any other conclusion, when he talks about clients with breast cancer or migraines or spinal cord injuries, than that he’s claiming to help people heal themselves, in some ill-defined way. A more curious and rigorous show than The Goop Lab would have pressed Amaral on precisely how his branded energy works its supposed wonders.