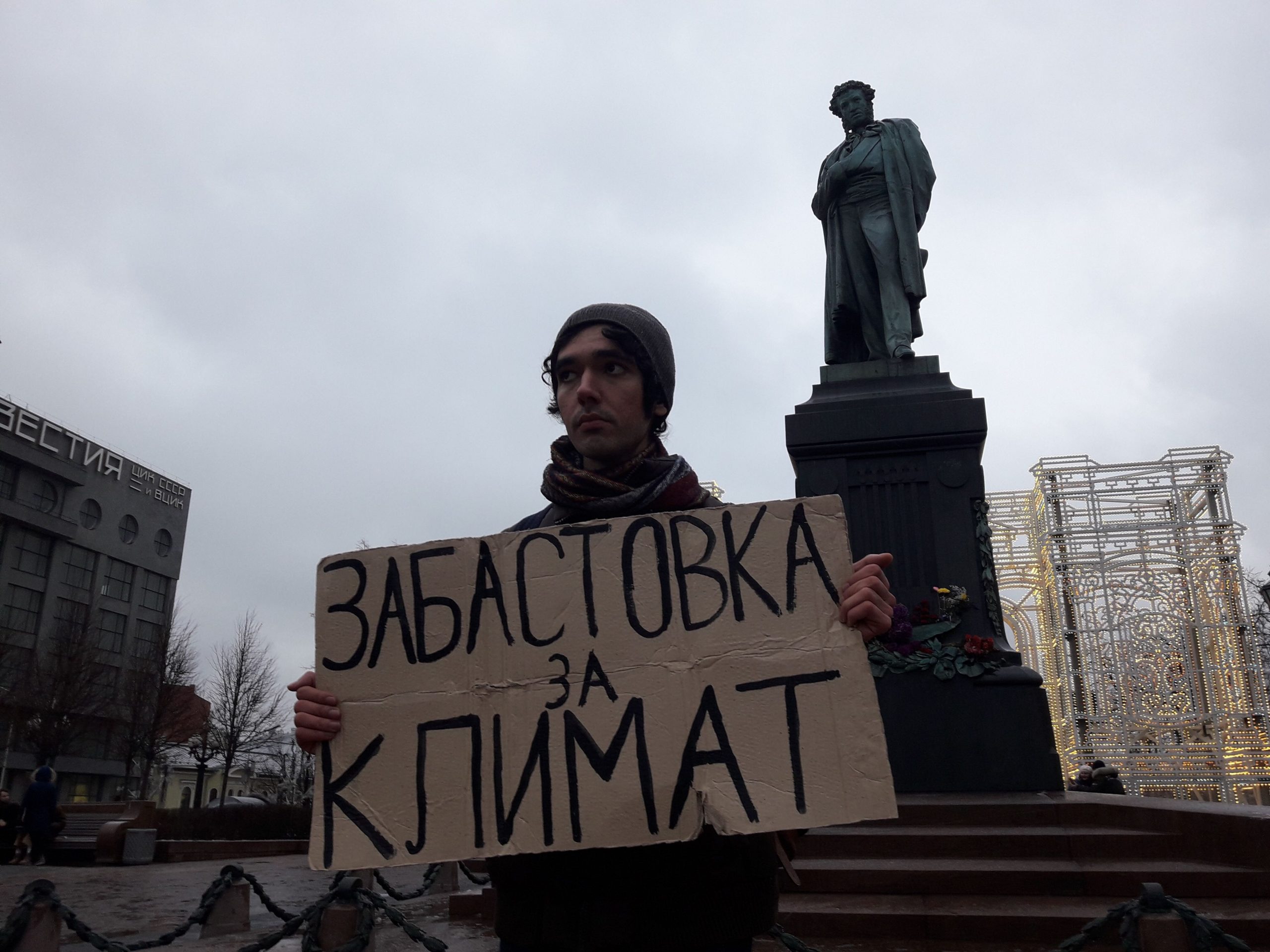 Arshak Makichyan, a 25-year-old climate activist, didn’t have that bad of a time in a Russian prison. In fact, he said people treated him fairly well behind bars.

“Everyone was supporting me in the prison, even some thieves,” Arshak told VCE News after being released on Thursday. “They were quite good to me.”

“I was talking about climate with police, with people in jail. People in Russia, they’re getting angry, and they’re starting to support every protest, even if they’re about climate,” he added.

Arshak, a violinist who recently finished his studies at the Moscow Conservatory, served a six-day prison sentence for staging an unauthorized protest to demand action on climate change. His punishment was among the harshest dealt to any of the climate activists inspired by 16-year-old activist Greta Thunberg, who started skipping school to strike by herself every Friday in 2018.

Arshak, sign in hand, took to the streets again on Friday, for the forty second consecutive week.

“It was better than I expected,” Arshak said of his time at a prison in Moscow. But he also noted the cockroaches and his foul-smelling mattress.

“I’m a vegan, so it was difficult for me to be imprisoned because there isn’t a lot of vegan food,” he said.

Arshak has held off getting a job so he can focus on his climate activism. Until around February of this year, he knew little about climate change; he said it’s not talked about much in Russia, where the environment isn’t exactly a political priority. Politicians often cite the benefits to the country that could come from a warmer climate, like new shipping lanes through the Arctic. Russian President Vladimir Putin even claims that “nobody knows the origins of global climate change.”

Arshak started hearing about Thunberg’s protests in Sweden and began poring over articles about climate science. After he took part in another political demonstration, in memory of a slain Russian opposition leader, Boris Nemstov, he started identifying as an activist.

“It was at that moment that I understood myself to be part of society, and I had to do something because nothing was happening,” he said.

So he linked up with the budding youth climate movement in Russia, which mobilized some 700 people to strike across the country in September, alongside millions of others across the world. Many people have been arrested around the globe, including in the U.S. and U.K., for protesting climate change, but few, if any, have served prison sentences for their activism.

Protesting in Russia without a permit is illegal, and Arshak said he unsuccessfully tried to get permits more than 10 times for a mass climate demonstration in Moscow. But lone demonstrators don’t need a permit.

Every week since March of this year, Arshak’s been staging a solo protest in Pushkin Square. Sometimes his friends join him and take turns holding a single sign, but two people won’t hold signs simultaneously to avoid confrontation with authorities.

The day Arshak was arrested, however, he was protesting with two other activists, who were arrested but didn’t face charges. The cops didn’t give him the opportunity to roll up his banner, he said in court, according to the BBC. He was detained, brought to a police station, held for five hours and released with a charge of demonstrating illegally.

He’s not the only young Russian climate activist to face pressure from cops. Sasha Shugai, a 25-year-old climate striker in Novosibirsk, told VICE News she’s been facing threats from authorities over her strikes. So are other activists across Russia, she said.

“The police are harsh with us,” Sasha said. “They threaten and intimidate us.”

It’s not just the police: Shugai said her teacher intimidated one of her friends into giving up participating in the strikes.

As Arshak was being released on Thursday, police were arresting another protester. Konstantin Fokin, a school principal in Moscow, chained himself up in Pushkin Square. The police showed up with bolt cutters and pried him loose.

He appeared to protesting by himself.

Cover image: Arshak Makichyan, 25, demands action on climate change in Pushkin Square in Mosow on Friday, December 27, 2019, the day after he was released from prison.