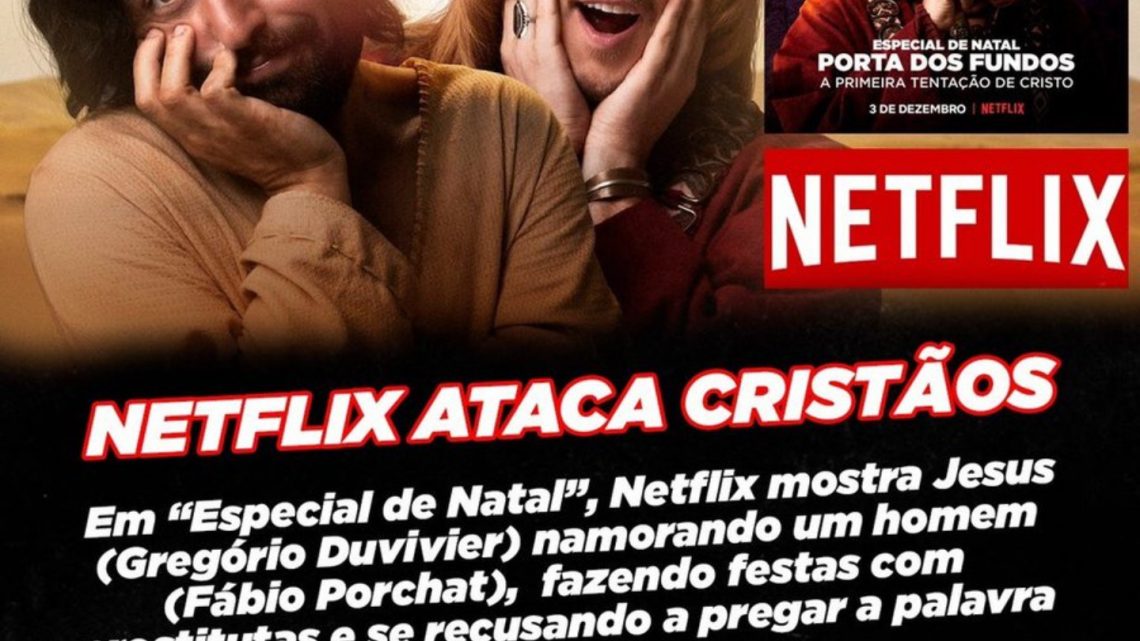 The Brazilian comedy group Porta dos Fundos has faced a storm of outrage from conservative Christians since it released its Netflix Christmas special about a gay Jesus earlier this month. Now, a far-right group that accuses the comedians of “blasphemy” says it has firebombed the Porta dos Fundos offices.

An obscure far-right group — identifying itself as the “Popular Nationalist Insurgency Command of the Large Brazilian Integralist Family” — claimed responsibility for the Dec. 24 attack in a social media post released on Christmas Day. In the video, three men in ski masks are shown throwing petrol bombs at the Rio de Janeiro offices of the comedy group.

The video also shows three masked men in front of the Greek symbol of a fascist-inspired 1930s political movement, Brazilian Integralism, claiming responsibility for the attack, and denouncing the Netflix special as blasphemous.

Porta dos Fundos (Back Door) said in a statement that its offices had been attacked with Molotov cocktails at dawn Tuesday. It said a security guard had managed to put out the fire before anyone was injured, but that the attack had endangered people in the building and others passing by.

“We remain united, strong, inspired and confident that our country will survive this storm of hatred and love will prevail along with freedom of speech,” said the statement. One of the group’s founders, Fabio Porchat, tweeted: “They won’t shut us up! Ever!”

Police in Rio de Janeiro said Thursday that they’re investigating the attack as an attempted homicide, and are examining images of unidentified men who carried out the attack.

Porta dos Fundos has faced a wave of angry criticism at home and abroad since the release of “The First Temptation of Christ” on Netflix earlier this month. The 46-minute, Portuguese-language comedy centers around Jesus, played by Gregório Duvivier, bringing home a man who is implied to be his boyfriend to meet his family.

The portrayal of a gay Jesus has outraged conservative Christians in Brazil, a country with the world’s largest Catholic population, and a growing evangelical movement whose support has helped put far-right President Jair Bolsonaro, an ultraconservative and self-described homophobe, into office.

Since its release, more than 2.3 million people have signed a Change.org petition calling for the streaming giant to pull the special and apologize for having “seriously offended Christians” while the hashtag #cancelonetflix has trended on Twitter, with many users posting screenshots of their account cancellations.

One of Bolsonaro’s sons, Eduardo, condemned the film on Twitter, writing: “We support freedom of expression, but is it worth attacking the belief of 86 percent of the population?” And a bishop from the state of Pernambuco, Henrique Soares da Costa said he had cancelled his Netflix subscription because of the “blasphemous, vulgar, and disrespectful” special.

Police in Rio said they were not yet classifying the attack on Porta dos Fundos as terrorism, but had not discounted it either. According to Reuters, police say a political group with a similar name and symbol to the ones shown the video claim of responsibility — the Frente Integralista Brasileira, or Brazilian Integralist Front — has denied any role in the attack, and investigators are still working to establish the identities and political allegiances of those responsible.

READ: Young Brazilians share their fears about a Bolsonaro presidency

Brazilian Integralism was an authoritarian, fascist-influenced nationalist movement that arose in the 1930s. The movement, whose green-shirted followers championed “Christian values” and were staunchly opposed to liberalism and Marxism, was suppressed when President Getúlio Vargas assumed full dictatorial powers in 1937. But the ideology still commands a tiny following, and the Brazilian Integralist Front, which was founded in 2005, continues to hold small rallies and engage in far-right activism.

Porta dos Fundos, which runs a popular comedy YouTube channel, is known for its videos challenging Brazil’s growing social and religious conservatism. The group’s previous Netflix Christmas special, “The Last Hangover,” featured the apostles waking up with massive hangovers the morning after the Last Supper, trying to piece together the disappearance of Jesus.

A U.S. Army Base 10 Miles Away from the North Korean Border Made an Unfortunate Error Last Night