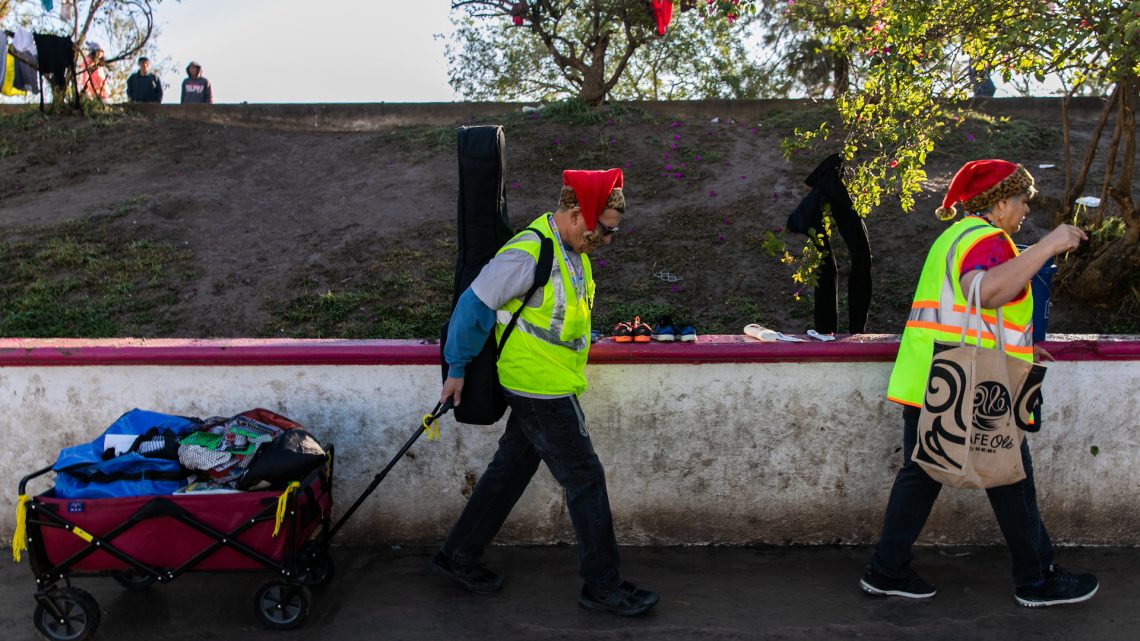 A team of 25 volunteers tow the goods across the Gateway International bridge that divides Brownsville, Texas and Matamoros, Mexico. The self-organized, rotating crew has been making the same walk every evening for the last year to provide a warm meal for displaced families on the other side.

But tonight is different. It’s Christmas and everyone is dressed in red and green with Santa hats atop their heads and they are en route to provide some semblance of a holiday cheer to the estimated 2,500 people who now call this tent city home. 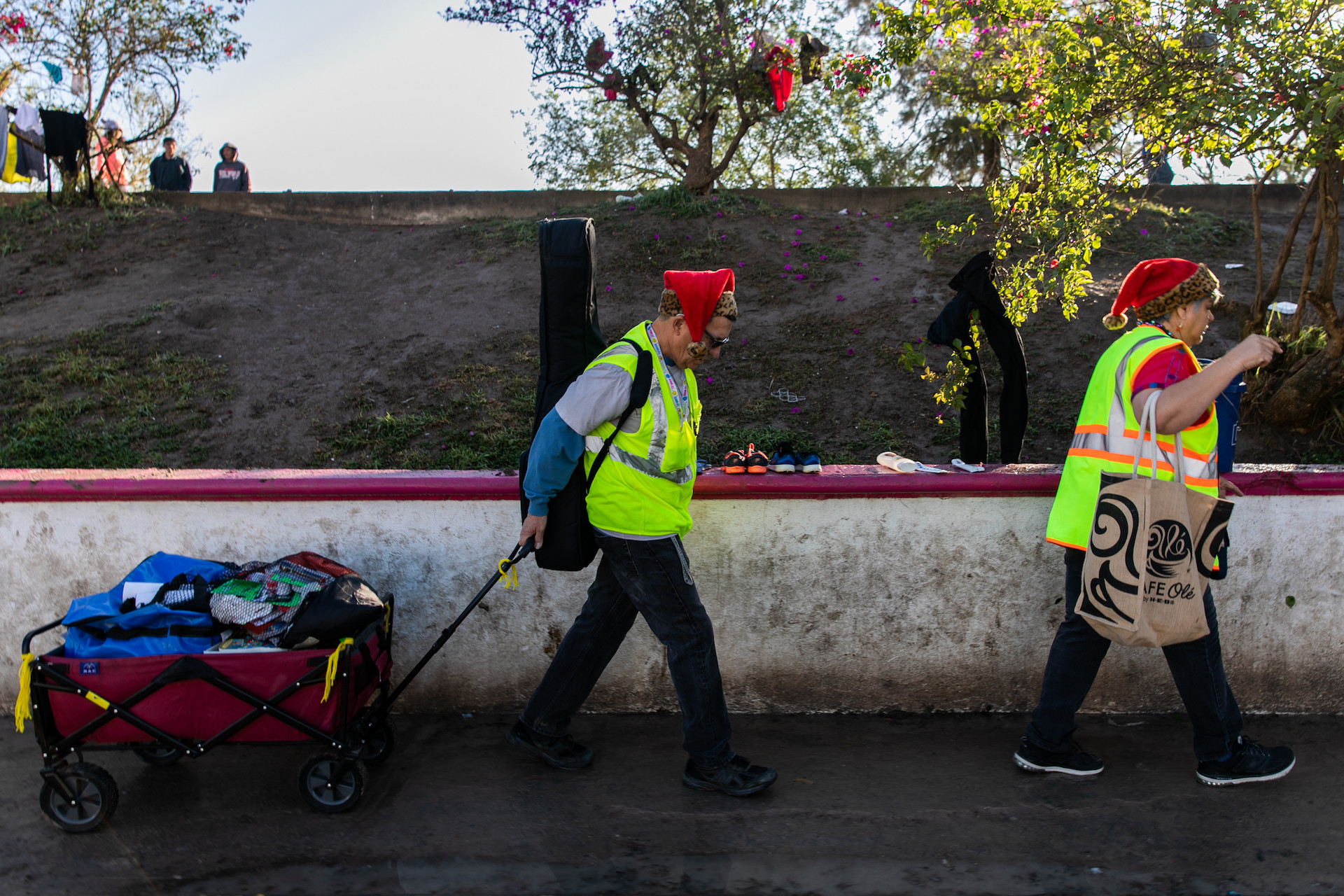 “Why am I here? For me it’s simple. I have grandchildren the same age as many of these kids. I would want someone to do the same for them,” said Melba Salazar-Lucio. Melba is one of twenty-five volunteers that served over 500 pounds of ham, 300 pounds of sweet potato casserole, 100 pounds cole slaw and 3,600 homemade Christmas cookies.

The camp has exploded in population over the past year as a result of the Trump Administration’s Migrant Protection Protocol, better known as the “Remain in Mexico” policy that requires asylum seekers to wait in Mexico while their claims are adjudicated in the United States. 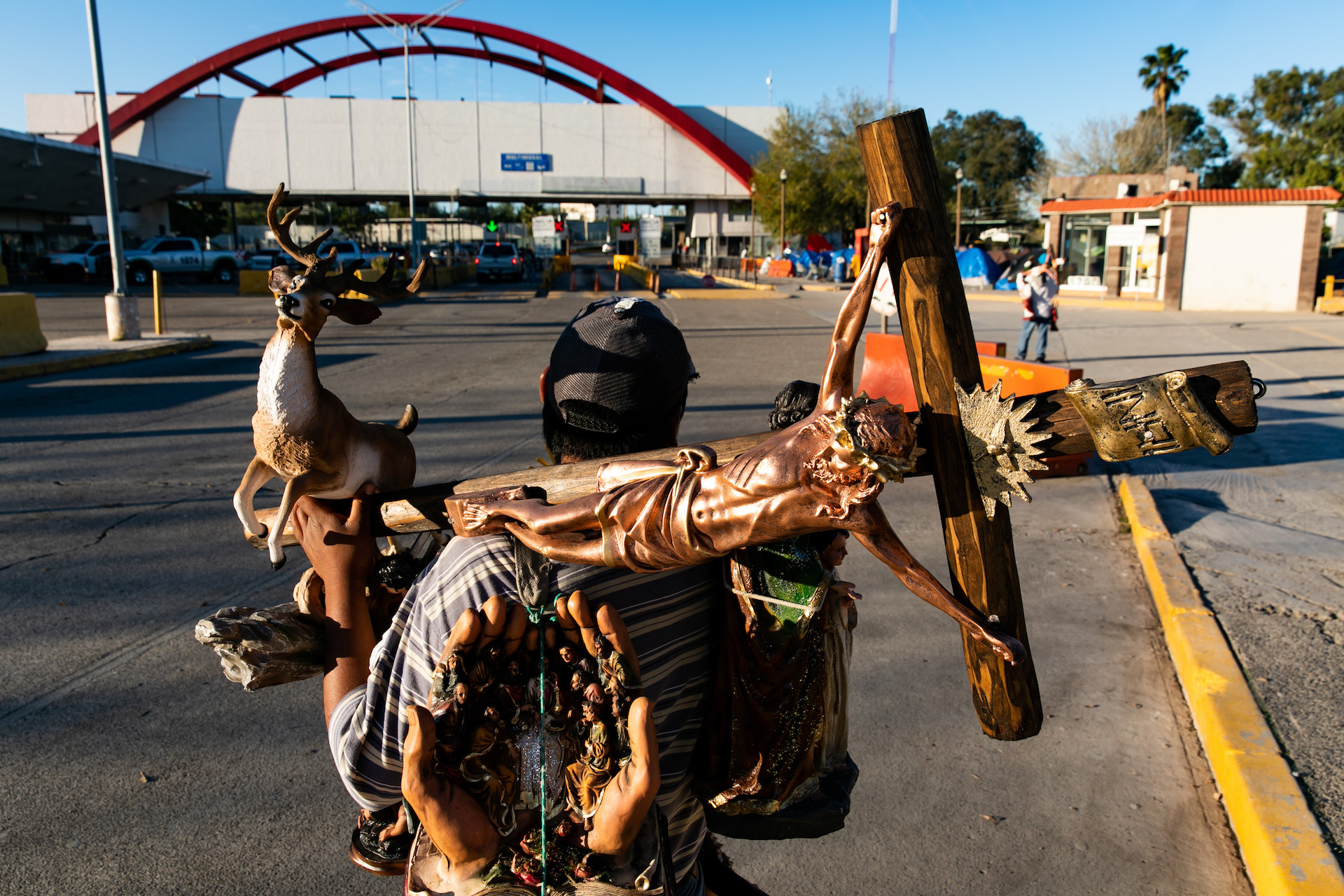 Miguel spends several hours each day and evening offering items for sale to people walking and driving from Mexico to the United States. "I tried to get better work but it is very difficult here." (Photo: Maranie R. Staab/VICE News)

The asylum-seekers are primarily from Honduras, Guatemala, El Salvador and Cuba. Most have been here for months, several for nearly a year and all are waiting for their claims to be processed. So far more than 60,000 people have been turned away under the policy and less than 0.1% have been granted asylum, according to Amnesty International. In lieu of a physical wall the protracted, confusing and lengthy asylum process has in effect become a bureaucratic wall.

“In Honduras it was not safe for me or my son,” said Mikaila, 37, who arrived with her 7-year-old son Daniel last week. She said she had been sexually assaulted in the summer, and her husband had been murdered. “I do not know what will happen but next year I hope we can have Christmas in the United States. That is why I left everything behind. For my son. I want him to have a chance at a good life, a chance at the American dream.” 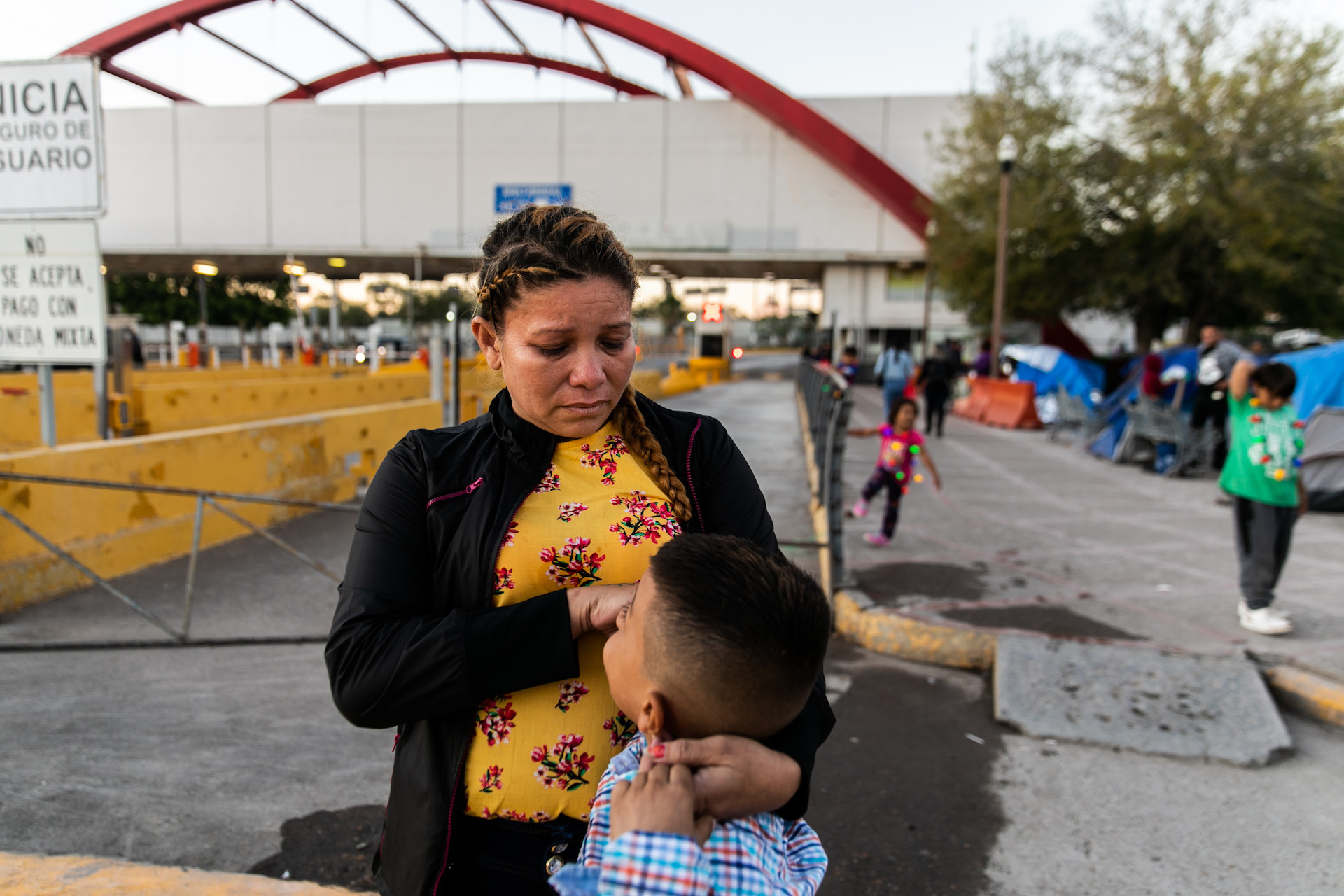 Mikaila, 37, and her son Daniel, 7, traveled alone from Honduras and arrived in the camp last week. "I don't know what I will do if they don't let me cross. I cannot go back." (Photo: Maranie R. Staab/VICE News)

Feet from the border an expanse of hundreds of colorful camping tents and blue tarps begins at the main plaza and then overflows onto a narrow strip of land along the edge of the Rio Grande River. The makeshift campsite stretches for a quarter of a mile and is juxtaposed against the urban streets of Matamoros.

Under the bridge that divides two countries mothers bathe their children in the Rio Grande and fathers wash clothing, utensils and their own bodies. The river is known to be contaminated with E. Coli and other bacteria, but it offers a momentary reprieve from the chaos, fear and uncertainty of the wait. 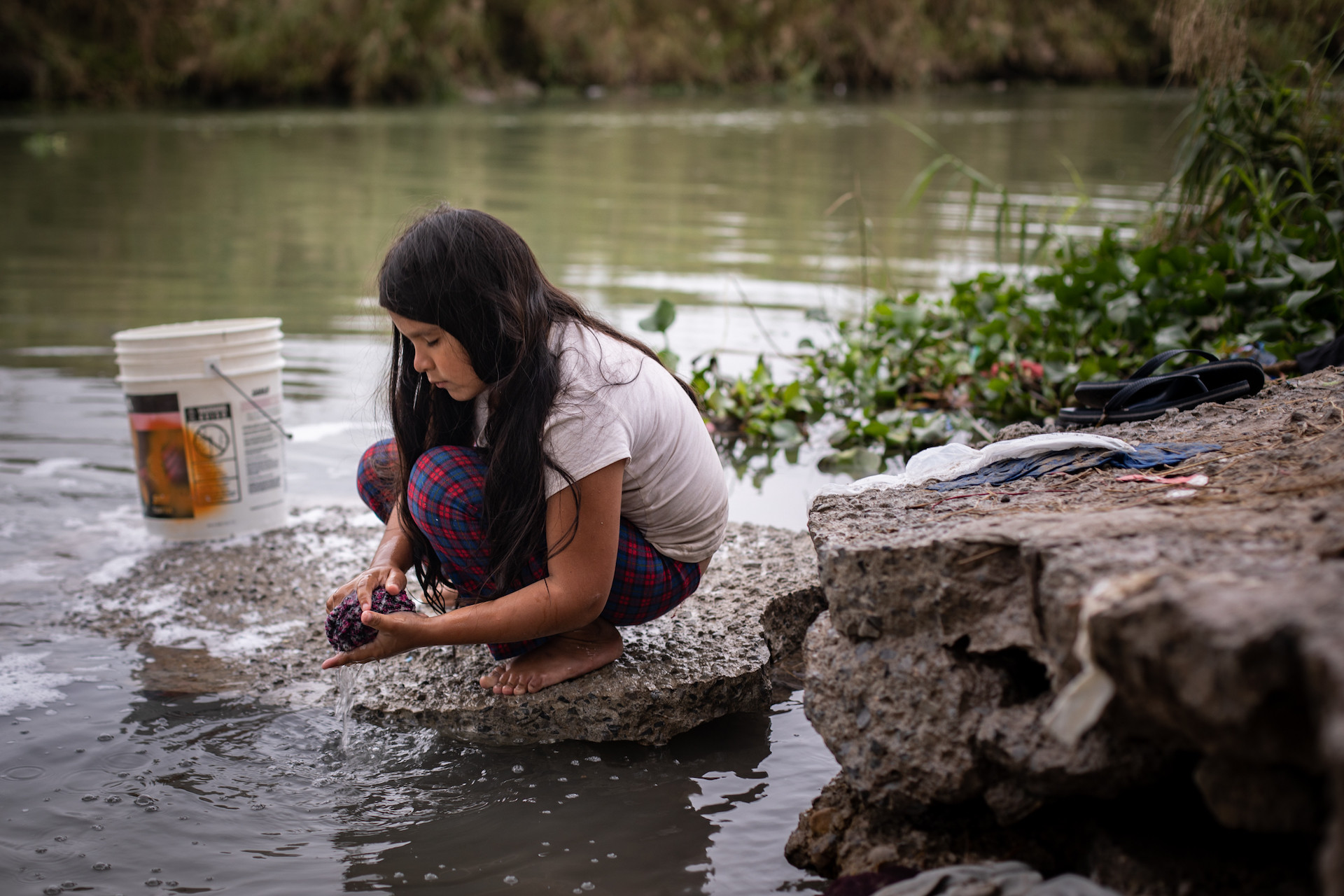 Imelda, age 8, washes her clothes in the Rio Grande River. She has not been able to attend school for the last 7 months as her family waits to have their asylum claim processed. Asked what she wants for her future Imelda responded,"I want to be a teacher someday." (Photo: Maranie R. Staab)

Some tents sleep four or five people, and many are arranged into small communities. There are fire pits used for cooking, a long row of porta potties, and portable sinks for washing hands and dishes.

The team of volunteers, many from Brownsville and some from across the country, are among several thousand who have stepped in to fill the void left by absent governments to provide food, medical care, clothing and shelter. Volunteers with Team Brownsville, Angry Tias and Abuelas and The Resource Center Matamoros are three core groups that regularly provide aid, but each has also welcomed volunteers from throughout the United States and Europe. 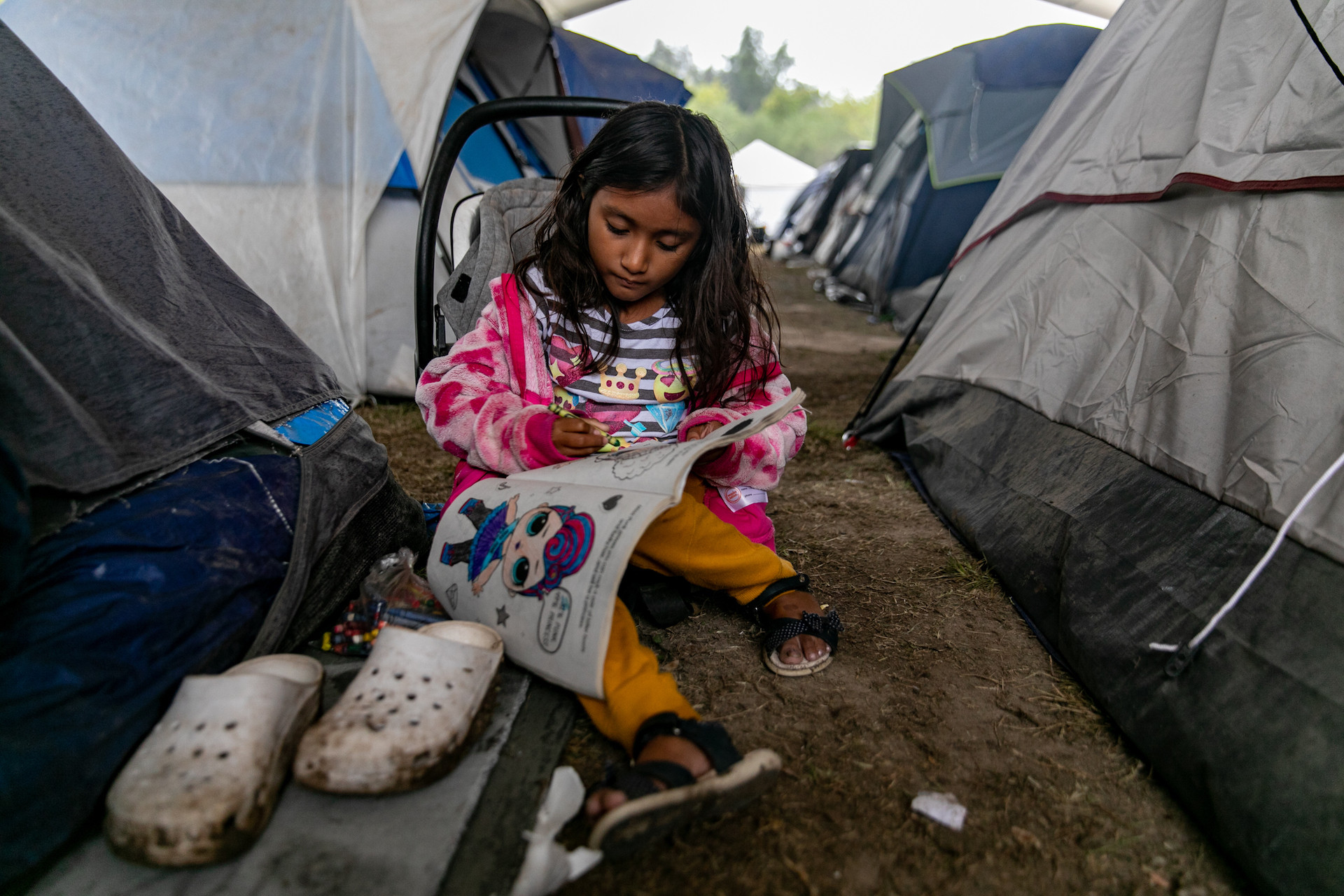 The days in the Matamoros camp are monotonous and the nights are in a tent shared with others, often damp and quickly becoming unable to keep out the cold. Griselda is 7 and spends most afternoons coloring. She and her mother, father and younger brother have been waiting since September for their first asylum hearing. (Photo: Maranie R. Staab/VICE News)

“We are very conscientious of the emotional state of asylum seekers during this period of separation from their families and we try to facilitate a sense of belonging during the holidays,” said Gaby Zavala, a resident of Brownsville and mother of two who founded Resource Center Matamoros.

A member of Team Brownsville shared hand-written letters to Santa on Facebook and donors responded en masse. Several hundred backpacks labelled with each child’s name were distributed to an excited mob of tiny, outstretched hands. Each contained age-appropriate books, the gift requested and a tiny reading lamp. With little light at night and no security or proper school the books and nightlights aim to encourage children to read within the relative safety of their tents. 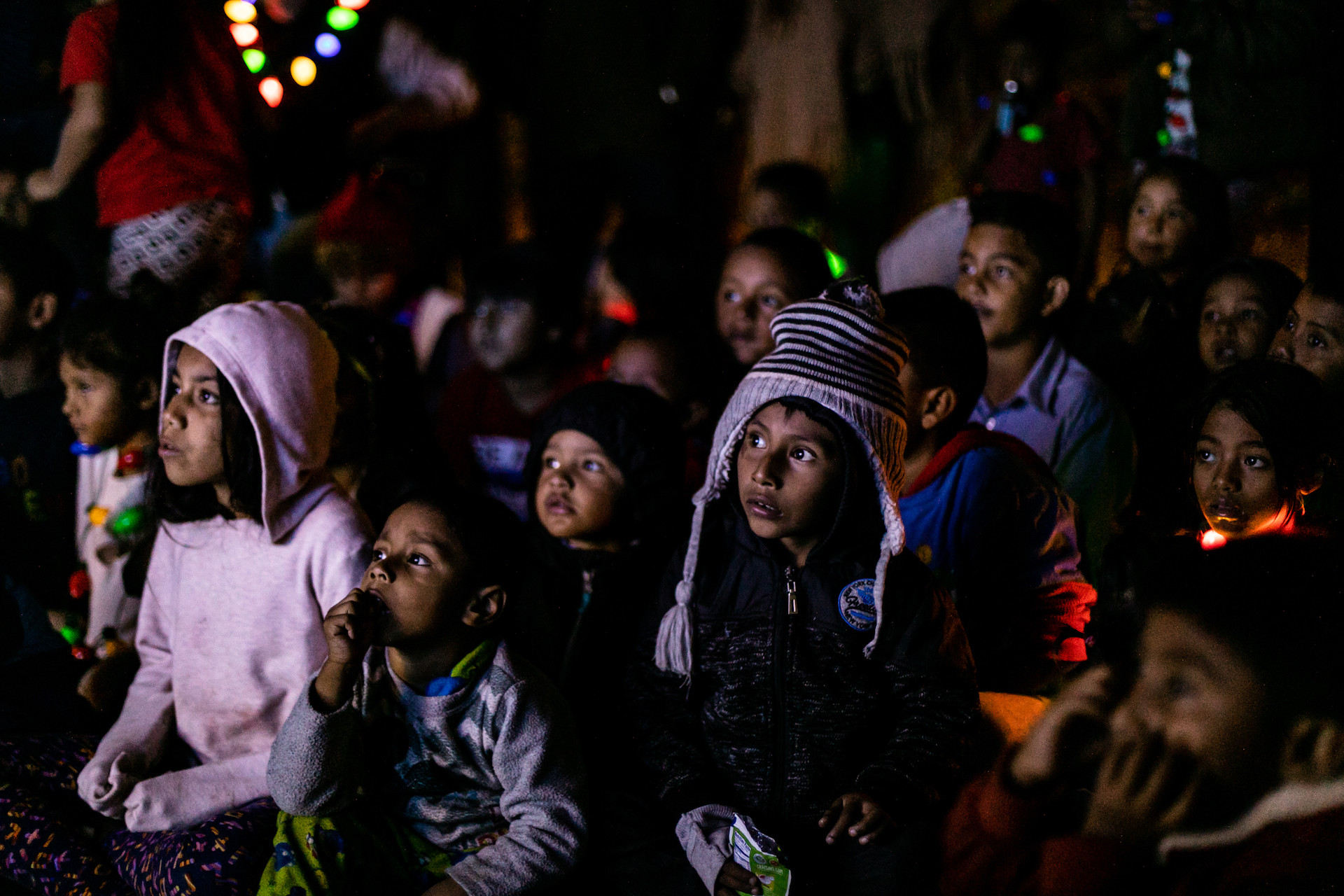 Following their visit with Santa a projector played a Spanish Christmas movie for a group of fifty young children. The side of a large shipping container that doubles as a medical clinic during the day served as the screen. (Photo: Maranie R. Staab)

Though each group meets slightly different needs, come Christmastime their collective aim is to bring something of a holiday to families and children living in limbo.

This year adults and children alike stand in line with paper plates to receive traditional American food, cups of Kool-Aid, and sit together on the concrete curb that surrounds the main plaza. 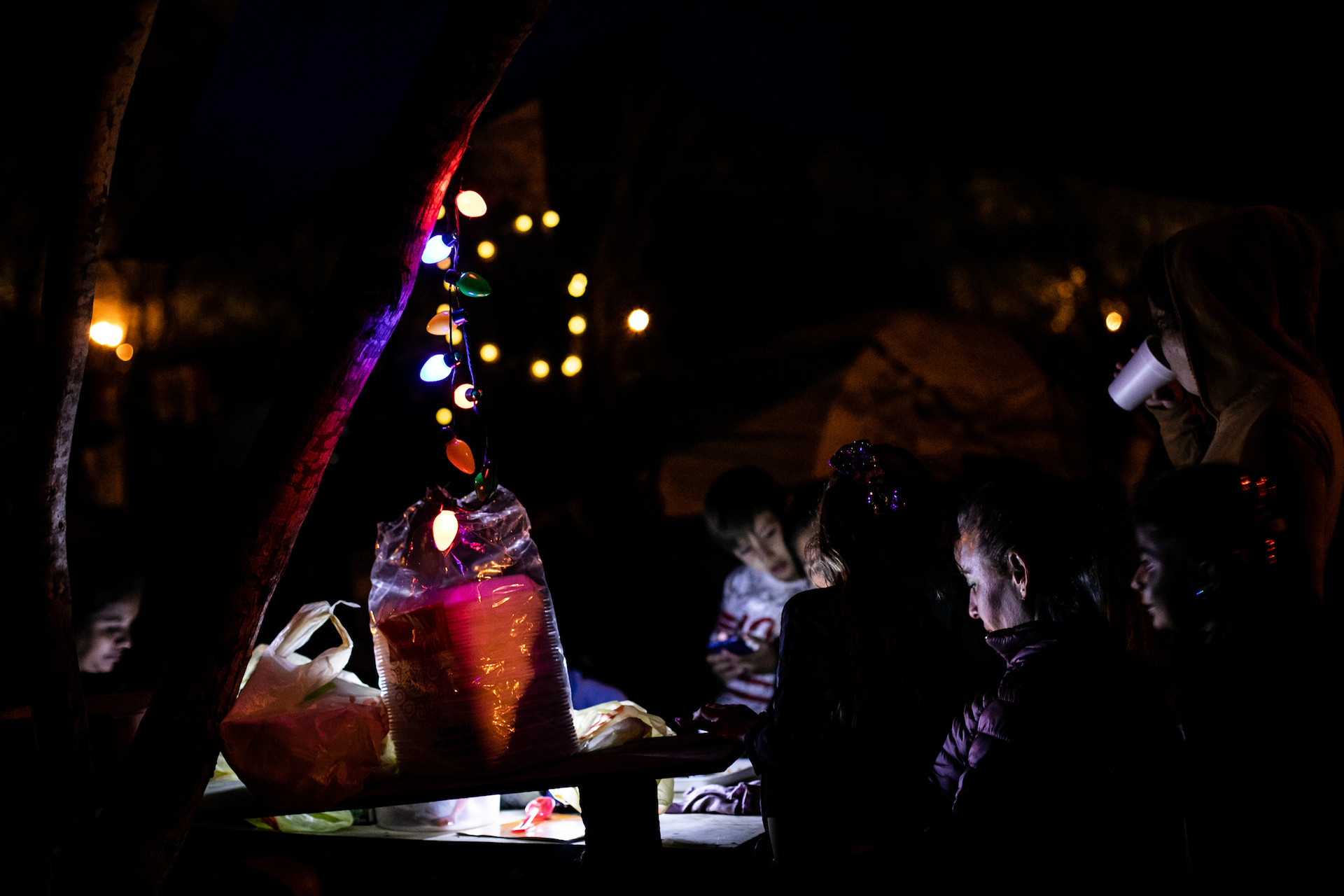 By 10 p.m. on Christmas Eve families returned to their respective tents. Some used the remaining battery life in their holiday necklaces to light a few more minutes together before darkness fell. (Photo: Maranie R. Staab/VICE News)

As dusk turns to darkness the three hundred children draped with battery-powered necklaces of colored lights provide a colorful spectacle as they run about the grounds. Jingle bells and ‘Feliz Navidad’ plays from a speaker someone has connected to their phone.

The grounds were lit only by distant stadium lights, smoldering campfires, and the glow of Christmas necklaces whose batteries were near empty. Santa Claus was not deterred by the darkness or lack of chimney and made a surprise visit to Matamoros. Cloaked in red velvet and an unconvincing white beard, Santa stayed for hours as children took turns sitting on his lap. Some whispered secret wishes into his ear and others seemed content to just be in his embrace.

For moments and even a few hours the atmosphere feels light, joyous and almost “normal.” 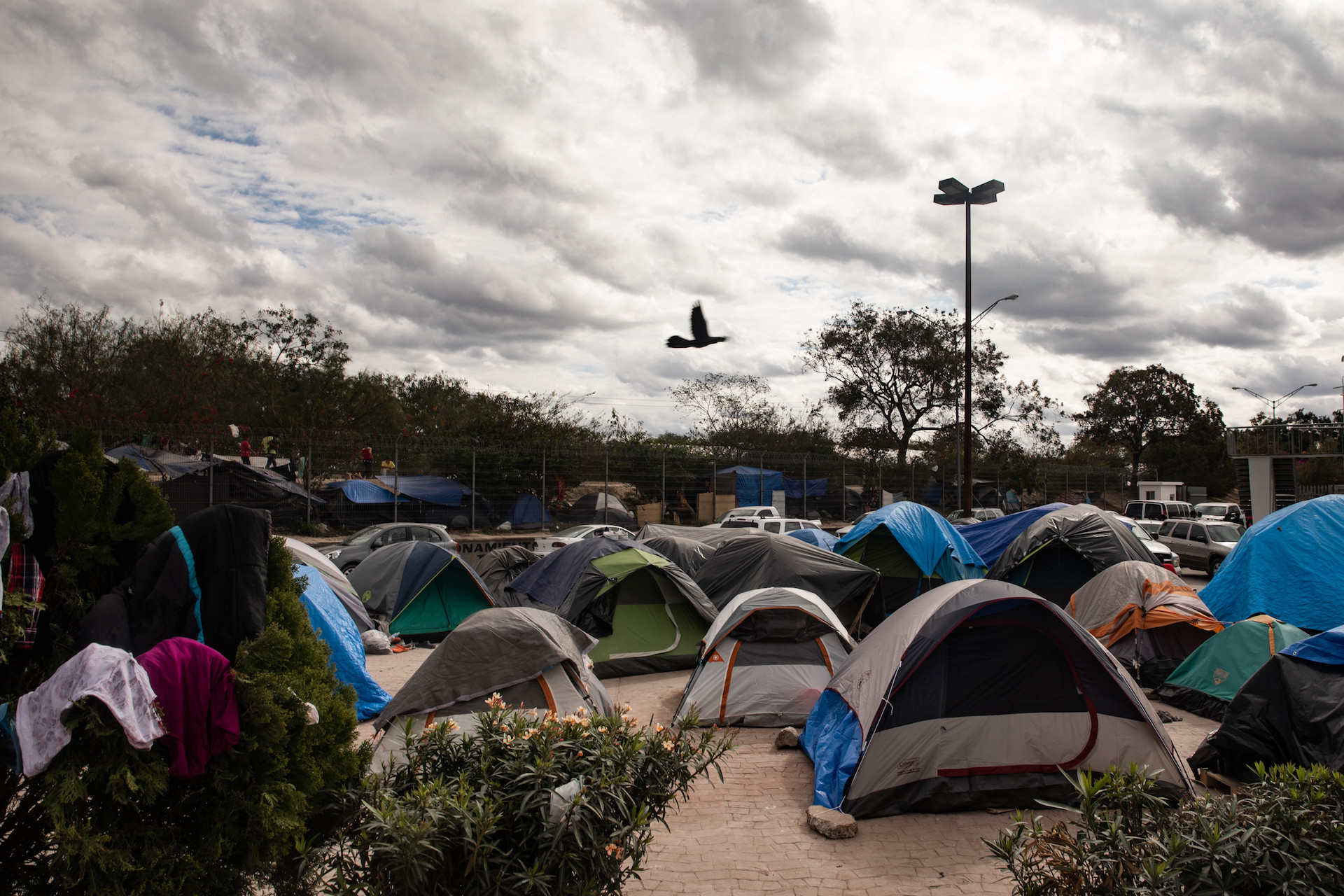 By 10PM on Christmas Eve families returned to their respective tents. Some used the remaining battery life in their holiday necklaces to light a few more minutes together before darkness fell. (Photo: Maranie R. Staab/VICE News)

Cover: On Christmas Eve Santa Claus visited the Matamoros camp and listened to the wishes of over two hundred children. While many smiled and laughed when they sat with the man in red velvet others seemed distant. (Maranie R. Staab/VICE News)

Photos Show Horrific Devastation After Typhoon Slams Into the Philippines