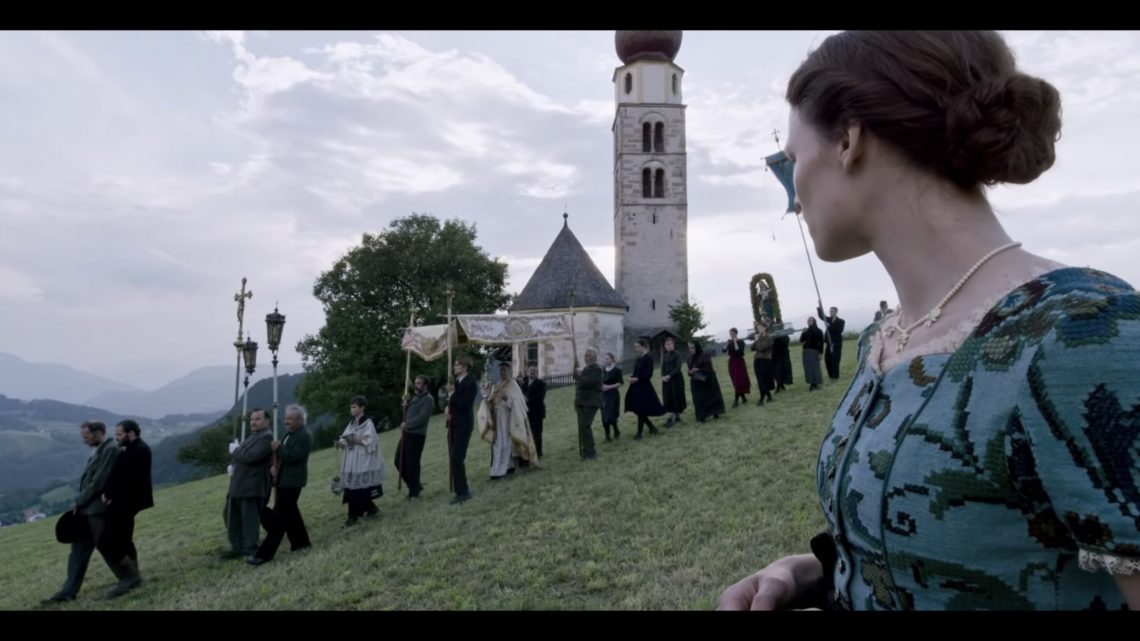 Terrence Malick’s new film, A Hidden Life, is about an Austrian farmer named Franz Jägerstätter, and if that name doesn’t ring any bells, well, that’s kind of the point. Jägerstätter, a husband and father who lived in a lovely agrarian mountain village called St. Radegund, was a conscientious objector to the Third Reich. When he was conscripted into the German army, Jägerstätter refused to take the standard issue oath of loyalty to Adolf Hitler. He was appalled by the war crimes that the Nazis were committing against human beings. For this resistance, the Nazis threw him in jail, and then in 1943, after a military tribunal found Jägerstätter guilty of treason, they cut off his head.

It wasn’t until 2007 that the Catholic Church honored Jägerstätter’s moral stand by beatifying him as a martyr. But for most of us, Jägerstätter has remained veiled in obscurity. That’s one of the key issues that Malick explores throughout A Hidden Life—whether a single civilian’s quiet act of resistance can have any tangible impact during times of systemic evil. The one character who’s indisputably impacted by Jägerstätter’s resistance is his loving wife, Fani, portrayed by Valerie Pachner in a raw and gutting performance that feels like the heart of Malick’s film. While Franz is beaten and spiritually tested in the Nazi prison system, we see the consequences for Fani back in the wildflowery fields of St. Radegund, as she struggles to keep the family farm running while also protecting their children from once-friendly neighbors who’ve been infected with the spores of fascism. They’re not too keen about Jägerstätter’s resistance. It makes them look, well… evil.

But here’s the remarkable (and heartbreaking) thing. While grappling with the near-certainty of her husband’s death, Fani stands with Franz. It’s a loneliness that she struggles with, but Fani remains firmly supportive of Franz’s defiance and refuses to admonish his decision, even with the shadow of the guillotine looming over him. This makes Fani a resistor too, but not in the way we tend to think of resistance these days, when authoritarian and nationalism-driven evil are rising in many parts of the world. A Hidden Life serves as something of a Come To Jesus movie for these times. It’s the sort of film that makes you go, “What am I doing right now?”

To get a sharper sense of what it felt like to play someone like Fani Jägerstätter in 2019, VICE caught up with Valerie Pachner shortly before an advance screening of A Hidden Life in LA.

VICE: Hi, Valerie. Every time I’ve described this film to my friends, I have to start off by explaining who Franz Jägerstätter was, which I think illustrates how lonely and isolated his stand against the Reich actually was. How did you first learn about this story?
Valerie Pachner: In Austria, it’s something you know of, growing up. But it’s not that [Jäggerstätter] is treated as a national hero or anything like that. I didn’t know the details of his story. It was not until I got in contact with Terry [Malick] when I really started to dig into the whole thing. And that started with the original letters that Franz sent to Fani from prison. Terry sent me a book of them. This was the most important thing. They show how they lived their lives, how they loved. The letters were the inspiration of the script.

It seems like you have an especially challenging role here, because Fani is both devastated by her husband’s decision to resist the Reich but she’s also supportive of him, even though she knows this will have consequences for their family. Why does she support Franz’s defiance?
She understands where it comes from, what he’s doing. She feels the same. Fani and Franz are on the same page when it comes to important things like… being a Nazi or not. She knows why he’s having such a hard time with that. But then the other thing that makes Fani support him is that she loves him. Like, really loves him . It goes beyond her own needs. She understands that if she did not support him, he would be alone. And it was quite interesting for me, during the shoot, to get there. On the one hand, to know that I’m going to be losing everything and it’s going to be so painful, but at the same time, to feel that this sort of love that makes me support my husband… it sort of elevates you, too. It’s empowering to realize how much human beings are capable of. And I think that was something that Fani shared with Franz. He, of course, didn’t want to leave her! And I think she understood that it was as hard for him as it was for her.

How did you get there? How did you move toward this love that Fani and Franz shared?
Well, it’s this weird thing you do, when you’re acting. You just try to imagine and dive into this world. And that was made easier in A Hidden Life because we were shooting on farm sets that were like playgrounds. We were basically doing more farm work than acting [laughs]. You would come to set, already in your costume, and we’d be milking the cows and then we’d be doing the scene. The whole process of just being there with the camera, nature, the children...

"The Jägerstätters’ resistance really came from this quiet and humble place. It was something they just felt, in their conscience. And I think being connected to that is what allows you to resist not only the extreme right but also greed or anything that lures you in and seduces you."

It almost sounds more like capturing or creating a moment, and then filming around it.
Exactly! At a certain point, I almost felt like I was living more of Fani’s life than my life. And as I put myself into her shoes, I realized, there were things that weren’t on script that I felt she would go through. You know, she doesn’t support Franz right away, when he makes his decision to resist. She doesn’t understand it at first. I talked with Terry about what I thought Fani’s different stages of acceptance would be and so, we improvised. And I felt like I was going through those stages too.

So, now that the film is complete, what has it been like to talk about it with audiences? Especially given that the film feels so urgently relevant due to recent political events?
There’s, like, two layers to it. When people approach me and I see how moved they are, I feel like there’s this strong emotional quality to the film that people can connect to. It almost goes beyond words. And the other thing, of course, is that due to recent events, you do get this sense that it’s important this story is being told and that we’ve started a conversation about all of this now. You know, it wasn’t that long ago! [The Jägerstätters’] daughters are still alive. They’re in their eighties, and for me, it’s kind of heartbreaking to see them witnessing these extreme right movements that are happening around the world and in Europe. And it’s hard to know where that is going. It’s hard to know what we can do about it.

Something I found especially compelling about this film is that it’s about two people who didn’t do “big things.” The Jägerstätters did not try to take down Hitler, they didn’t shelter anyone, but they refused to go along with the madness that everyone was buying into. They were punished for it. Most of us don’t know their names. But today, there are people waging their own acts of resistance, living their own hidden lives that might never be known. What make a life like that worth living?
I feel that an important thing—something that Fani and Franz had—is being very well-connected with what you believe is right, in your heart. I think that with the Jägerstätters, it was about being able to look in the mirror and knowing what is right. And you have to be connected with what that to not jump on the train, to not get seduced by violence and hatred... The Jägerstätters’ resistance really came from this quiet and humble place. It was something they just felt, in their conscience. And I think being connected to that is what allows you to resist not only the extreme right but also greed or anything that lures you in and seduces you. Doing this resistance without being vain about it is almost… I don’t know… I feel it’s a virtue. It’s a good way to be, and to live.

Thanks for speaking with us.