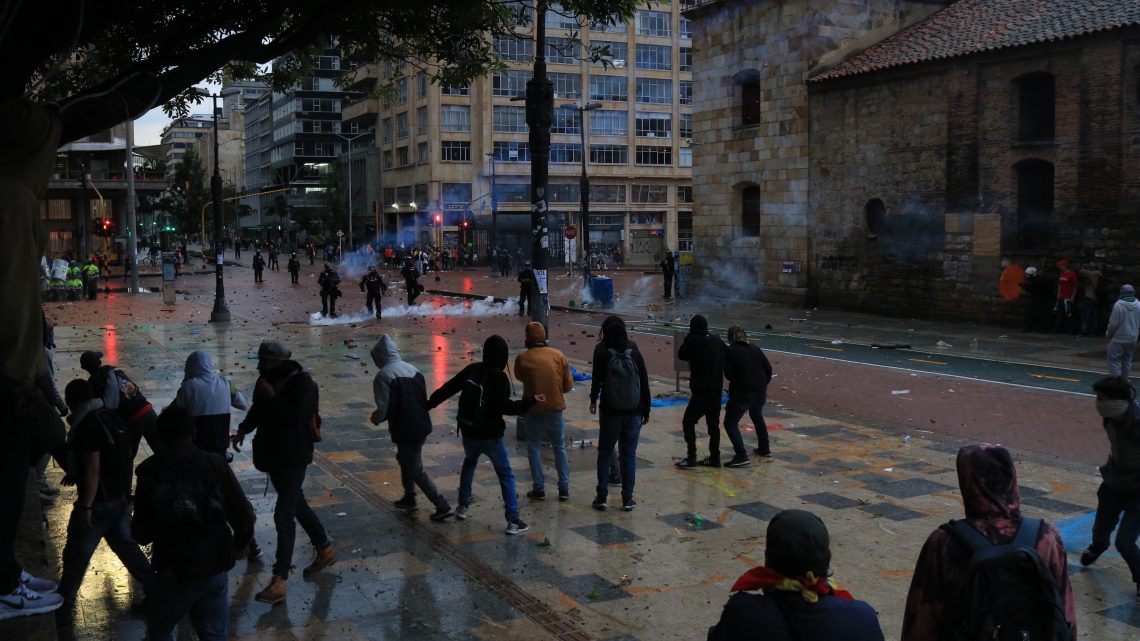 Colombians Have Watched Their Neighbors Rise Up. Now They’re Taking to the Streets

BOGOTA — The sprawling city of Bogotá rattled with the racket of people banging pots and pans from their windows while police grenades boomed in the distance and tear gas wafted through the city center.

Hundreds of thousands of Colombians flooded the streets Thursday in massive anti-government protests throughout the country, following the mold of recent uprisings in Ecuador, Chile, and Bolivia. As protests dragged into the night, violent clashes broke out with police in the capital city and elsewhere, with reports of three deaths in the city of Cali.

But it was the unplanned and organic clanging of kitchenware, a Latin American protest tradition, across neighborhoods rich and poor that signaled Colombia had joined the club of South American governments facing upheaval. 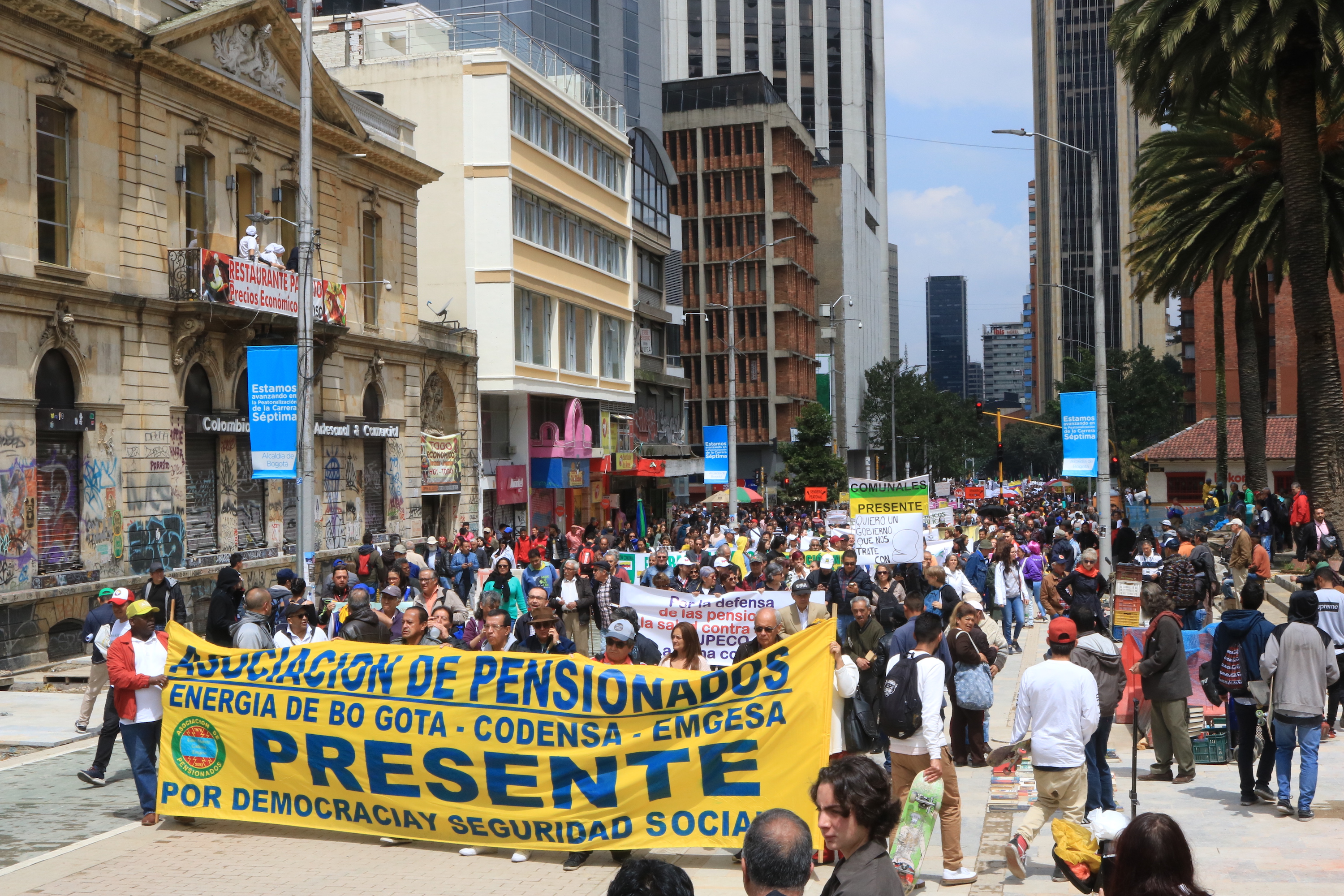 An association of retirees leads a segment of Thursday’s march down Bogotá main pedestrian thoroughfare. (Dylan Baddour for VICE News)

“I’ve given very precise instructions for the public forces to guarantee the security that is being affected by vandals and criminals that want to terrorize our citizens,” he said, adding that “dozens of criminals” had been arrested throughout the day.

But he appeared to extend a fig leaf to protesters, saying he had heard their demands and would deepen his administration’s “social dialogue” and fight against corruption. The message stopped far short of the drastic actions desired by demonstrators, many of whom want Duque’s resignation.

“Down with the government of Ivan Duque!” chanted a group of retirees as they marched in a river of people that flowed all day through central Bogota. “Down! Down! Down!”

The protesters weren’t united under any one movement or cause. They brought a long and varied list of demands, ranging from particular legislation to longstanding structural challenges and broad changes in the priorities of the government. These disparate groups had waged protests of their own, but they all came together Thursday, no doubt energized by the recent achievements of demonstrators in other South American countries.

Now that these movements have combined forces, it’s likely they will keep pushing.

“Duque's failure to address any of this is going to be a further call for protests,” said Sergio Guzman, director of Colombia Risk Analysis in Bogota. “I think there are going to be more.”

Organizers said 800,000 people marched in Bogotá and more in other cities, though Colombia’s interior minister said 12,000 hard turned out in the capital city and 207,000 across the whole country. Colombian pundits hailed the marches as historic and the largest in memory. 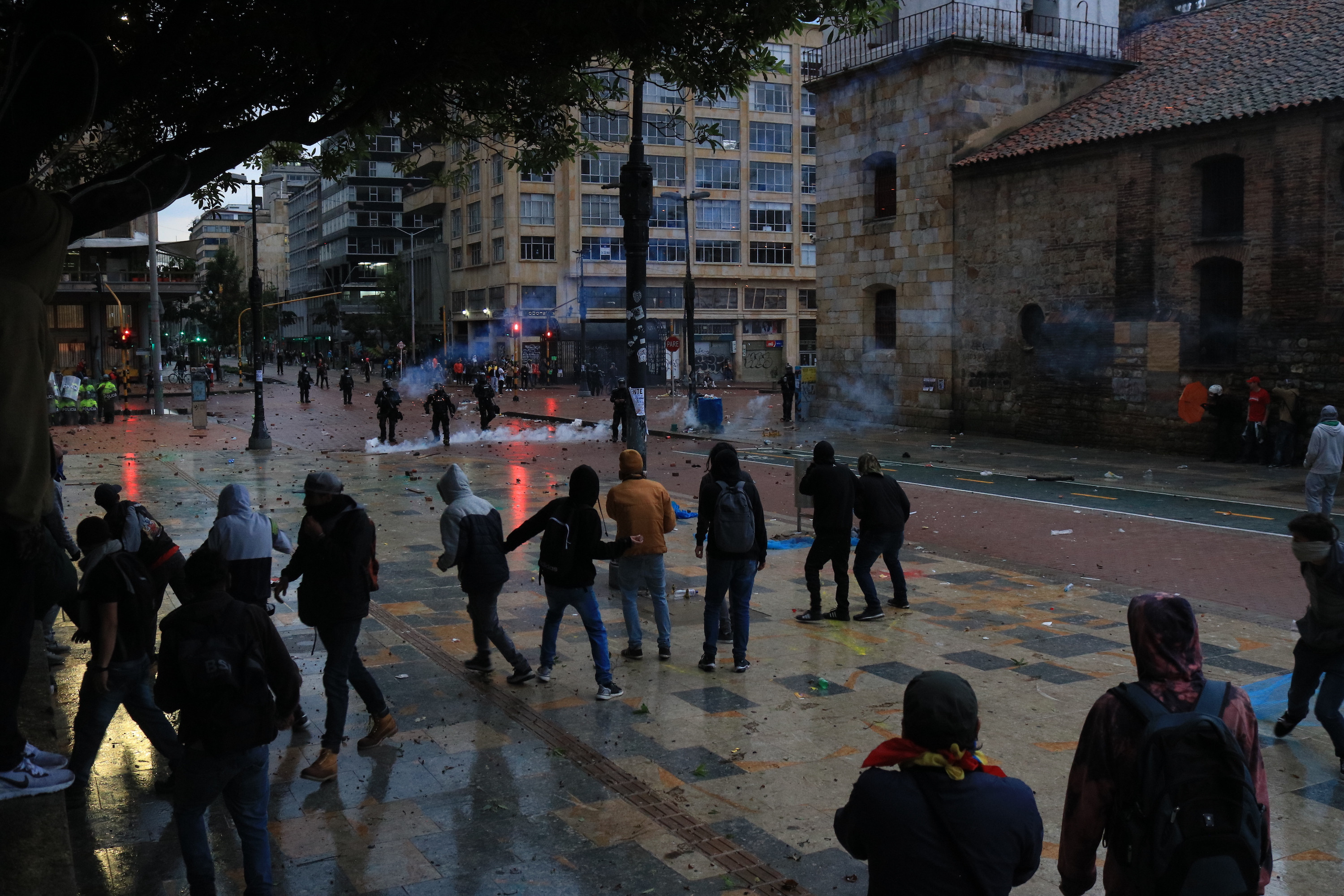 Many demonstrators said they drew inspiration from the recent uprisings in Ecuador, Chile, and Bolivia, where an outraged public has managed to chase out a president or force a vote for a new constitution.

Eduardo Suarez, an 18-year-old student who walked in the march holding a skateboard, said examples in neighboring nations “helped Colombia to open its eyes, to see that many countries face our situation and are able to change it.”

But unlike other recent protests in the region, Colombia’s protest wasn’t spontaneous.

Ecuador flared up over a nixed fuel subsidy, Chile over a public-transport fare hike, and Bolivia over a suspicious presidential vote. Activists in Colombia, by contrast, began planning this nearly two months ago, and in that time nearly every group with a complaint against the government joined under the banner to present their varied qualms. 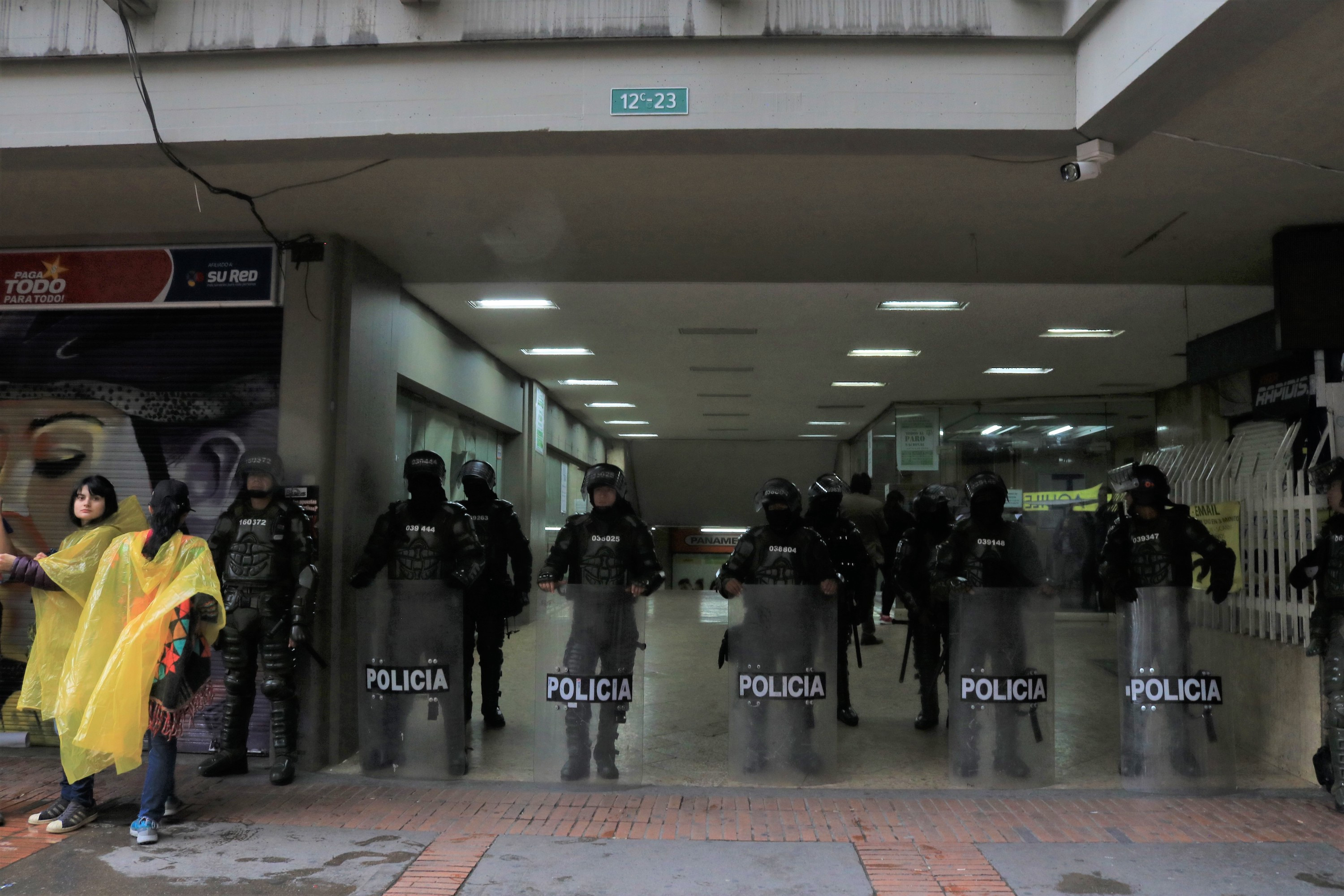 “All these sectors that have been offended are coming together to say this government isn’t working for us,” said Naryi Vargas, a researcher at the Peace and Reconciliation Foundation, a think tank in Bogota.

Three years after ending its civil war, Colombia’s economy is growing faster than most in the region. But unemployment remains high, above 10 percent, and approval for president Duque has sunk low, to 23 percent, according to a poll aggregation by Colombia Risk Analysis.

Yet many Colombians sense that their country’s growth has been confined to the wealthiest sectors.

“We have a grave situation because unfortunately those who govern this country have bet on foreign production and imports over the nation’s farmers,” said Oscar Guiterrez, president of Farming Dignity, an agricultural interest group that joined the strike in October. “Foreign producers have subsidies we don’t have, highways, technology, good ports — a thousand things that Colombian farmers don’t have.”

A handful of small scandals stoked the outrage that fueled Thursday’s unrest. First it was labor reform, presented Oct. 1 to Colombian congress by the patron of Duque’s party, which caused a coalition of labor unions to call a one-day strike for Nov. 21. Later a finance industry association released a proposal to lower the minimum wage by 25 percent for people under 25, enraging the students, who had already been protesting for weeks over the revelation that public education officials had embezzled public money for sports cars and fancy dinners.

Early this month, Colombia’s defense minister resigned over revelations that a recent military bombing had killed eight children, and peace activists declared themselves part of the march. A massacre of indigenous people and continued assassinations of community leaders exposed the government’s helplessness before security problems in its countryside. 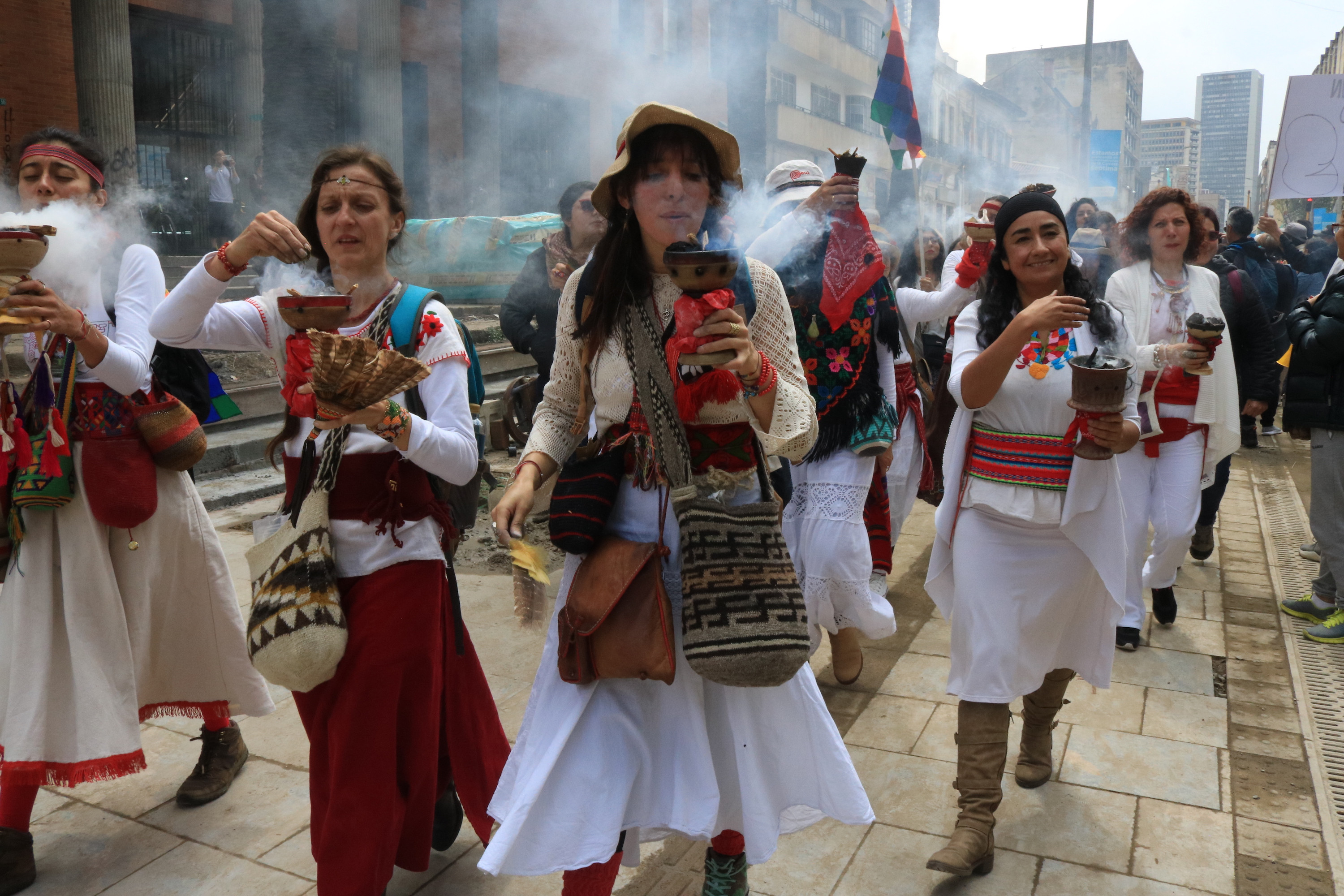 While labor laws, corruption, security, and poverty have spawned many protests in the past, for Thursday they all came together in one.

Yet Duque has tended to hold his line amid outcry, helping fuel the large turnout at Thursday’s marches.

“We’re asking him to resign,” said Oligario Pineda, a 65-year-old social counselor. “We need changes. Our president doesn’t help at all. He’s an obstacle.”

From a stage in the city’s main square, an announcer addressed the crowd as it filed by, reporting positive turnout in other Colombian cities. There weren’t yet any plans to continue the effort after Thursday, he said, but leadership, inspired by the turnout, had decided to meet Monday to determine what’s next.

“This has been a great success, and we’ve taken note,” he told the cheering crowd as two police helicopters circled overhead. “We’re not going to give up.”

Organizers have already announced another national demonstration for Monday.

Cover: Protesters fill the main pedestrian thoroughfare of Bogotá Thursday in a procession that lasted all day. Dylan Baddour for VICE News.

Paul Krugman is More Than One Toke Over the Line

Blue-Light Lenses Are a Scam