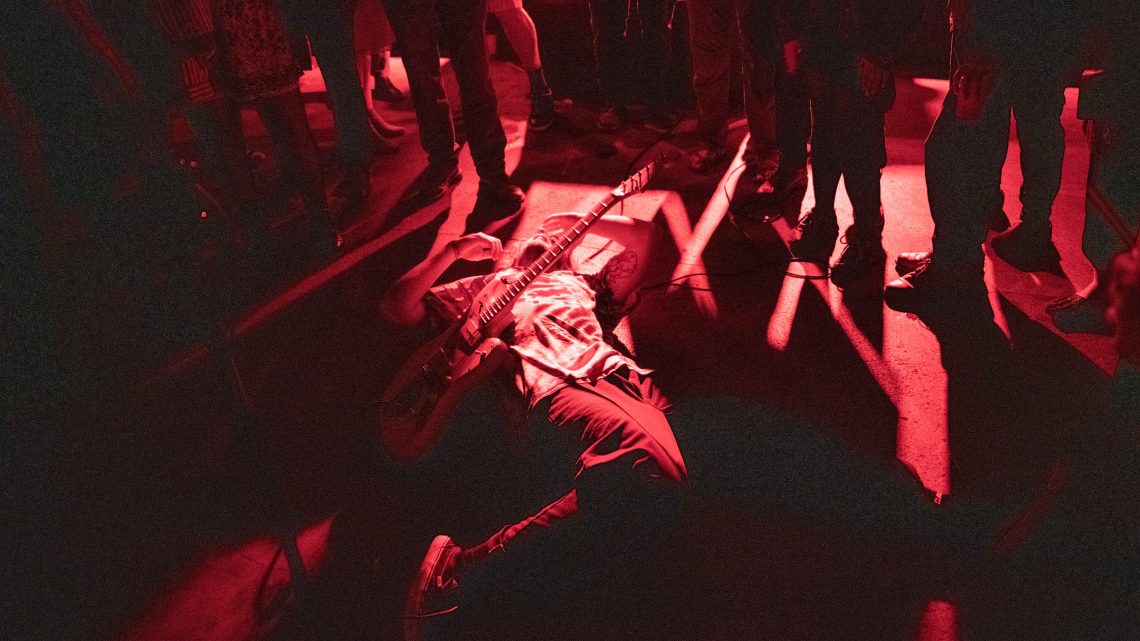 If you walked down Commonwealth Avenue in Boston’s Kenmore Square on any given night between 1974 and 1997, you’d hear loud vibrations emanating from the dank basement of the Rathskeller, Boston’s famous punk club, lovingly nicknamed “the Rat,” a fitting name considering it wasn’t uncommon for an actual rat to crawl out from underneath the stage every now and again. Those noises were generated by some of the most iconic punk and hardcore bands in the world—The Ramones, Blondie, The Pixies, and The Fall, just to name a few. Today, when you visit that same spot on Commonwealth Avenue, you’ll be asked if you want Venti or Grande, because it’s a Starbucks now. But as once-iconic venues close their doors, a new generation of DIY punks is born.

Irish punk band Kid Karate recently set out on a 10-city tour across the US, brought to you by Noisey and Bushmills, to bring their hits—like their single “Louder”—stateside, and prove the hardcore scene is still very much thriving. They traveled to cities rich with punk history, like New York City, Boston, and Seattle, to explore old (and new) venues, meet staples in the local punk scenes, and relive the glory days of the beloved garage-based genre.

Here are some highlights from their trip down hardcore memory lane.

On the first stop of their U.S. tour with Noisey and Bushmills, Kid Karate returned to where it all began: New York City, often cited as the birthplace of punk. In the mid-1970s, a generation of angsty teens was tired of the flower-power days of the 60s and looking for an outlet. That’s where punk came in.

“People were pissed off and they needed a way to vent,” Lunachicks frontwoman Theo Kogan told Kid Karate as they walked along Joey Ramone Place in the East Village, “and then throw the art of this neighborhood and New York into it and that’s sort of how, I think, punk and new wave and no wave all began.”

Then the group wandered down to where the famous NYC punk club CBGB once stood. It’s where the Lunachicks, who originally met and started playing music together in high school, played one of their earlier shows. “Blondie used to live across the street,” Theo explained. “Television played here, and Blondie and The Ramones, Patti Smith, Talking Heads, everybody.”

Next, Kid Karate headed to the Niagara bar in the Lower East Side to talk to Jesse Malin, who performed with the hardcore bands Heart Attack and D Generation, where he talked about growing up in NYC in the ‘80s during the Reagan era, when talks of a draft and nuclear war were in the air. “We’re little kids, but it’s still kinda scary,” Malin said, “and we need something, so we find each other, without the internet, without cell phones, on this corner at 7th Street and Avenue A.” He points to the street corner outside Niagara.

“There was collective unitity between guys and girls and gay and straight and everybody danced in this little room,” he said, gesturing to the back of the bar. “The rhythm, the beat. It’s that feeling that brings everyone together.”

Boston does it DIY

Just because Boston’s most popular punk venue is no more, doesn’t mean the scene in the New England city is dead. Kid Karate met up with Bridge Nine Records founder Chris Wrenn in the famed Kenmore Square to talk about the origins of the hardcore scene in Beantown.

“All my friends were in bands and I wanted to contribute,” Wrenn said of growing up in the hardcore punk scene. “In a DIY scene, everyone kind of has their role, so I wanted to see what I can do.” That led to him releasing his first single in the mid 90s and, “24 years later, I’m still doing it,” he said.

As they passed the former location of the Rat, Kid Karate’s vocalist and guitarist Kevin Breen bemoaned the fact that it’s now a Starbucks “and doesn’t have any character.” But Wrenn reassured him: “Obviously, there are these institutions that just kind of fade away, but hardcore punk is like water, it’s gonna find a way.”

Next, Kid Karate paid a visit to Jamie Bisonnette, the “Connecticut punk-rock kid” turned award-winning chef. “I got kicked out of the bands I was in because I couldn’t play the music because I was too busy cooking,” he explained of his transition from the mosh pit to the kitchen. “Being a chef is a lot like what you learn in hardcore punk, it’s DIY.”

Like Wrenn, Bisonnette sees a silver lining to all of the old punk clubs closing in Boston. “Once those places started closing, you saw kids throwing shows anywhere they could,” he said, “and I love that—that’s what it’s all about.”

Before the 90s, Seattle was a sleepy, rainy city with all the charm of a small town, one where everybody knows everybody. But in the summer 1991, local bands Pearl Jam and Nirvana released two albums within a month of each other, Ten and Nevermind respectively, and suddenly the whole world had its eyes on the Emerald City.

“We knew the scene was amazing, but then these two records came across my desk and I just remember thinking ‘everything is gonna change,’” KEXP Radio DJ Marco Collins, who moved to Seattle in 1991 to start a radio station, explained. “But I still had no idea how much everything was gonna change.”

In a matter of months, local Seattle punk bands went from playing for 2,000 people to 20,000. “We didn’t know what happened,” Collins said. “We had Soundgarden, we had Nirvana, we had Pearl Jam, we had Alice in Chains, we had Screaming Trees, we had Mudhoney, and this is kind of a small town, like everybody knows each other.”

When asked why he thought Seattle was such a hotbed of hardcore music, Collins said it was because people are “rained out”—it rains nearly five months out of the year in the Pacific Northwest city—and “forced into their basement.” They need a way to express that pent-up energy.

“People play music all day long, because you can’t do anything else,” Collins said. “We’re in our own fucking bubble here—and sometimes that’s a really nice place to be.”

Taco Bell Recommends Blending Its Tacos Into a Demented Soup