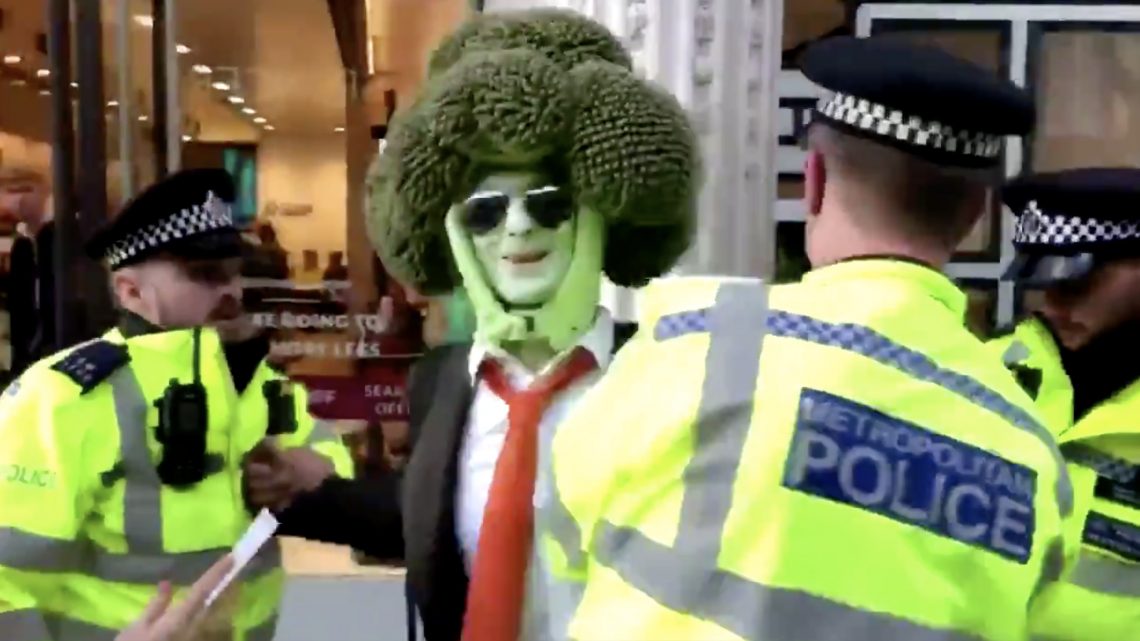 Earlier this month, Extinction Rebellion, a nonviolent international climate change movement, started what it said would be a two-week long peaceful-but-disruptive protest in London. Activists involved with the organization have blocked traffic, projected images of Greta Thunberg onto Parliament, and even superglued themselves to the sides of buildings as they try to convince the government of the United Kingdom to focus on the very environmental threats that the planet is facing.

The timing isn't great—the government seems to be up to its eyebrows in Other Bad Stuff right now—but Extinction Rebellion still wants those in charge to meet its three demands, which include the government declaring a "climate and ecological emergency," pledging to reduce greenhouse gas emissions to net zero within six years, and creating "and being led by" a citizen's assembly on climate-related issues.

But the Metropolitan Police have frankly had enough with all of it, and on Monday, they flat-out banned all Extinction Rebellion-related protests, and started clearing demonstrators out of Trafalgar Square, where many of them had been camped. "Any assembly linked to the Extinction Rebellion ‘Autumn Uprising' must now cease their protest(s) within London by 21:00 hours," the Met said in a statement that night. "Protestors have been notified, and given an opportunity to leave the site. Anyone who fails to comply with the condition is liable for arrest and prosecution."

In their latest update, the cops said that they had made 1,642 arrests in connection with Extinction Rebellion—and one of those arrests was a man dressed as a giant piece of broccoli.

On Sunday, the suit-and-tie wearing, floret-headed gentleman was handcuffed by three officers as he silently held a sign that said "I'm Locally Sourced & Environmentally Friendly." (He did yell "Give peas a chance!" as he was being restrained.)

On Wednesday morning, Mr. Broccoli appeared on Good Morning Britain, where he was interviewed by Piers Morgan, a man who looks like a less sympathetic version of The Necronomicon from The Evil Dead.

Mr. Broccoli seemed a bit unprepared for the occasion, or perhaps he was just uncomfortable being that close to Morgan. Regardless, he seemed to struggle to explain why he'd chosen to participate in the protests, why those demonstrations were important, or even one single benefit of a plant-based diet. "I'm just a broccoli at the end of the day," he said, straightening his tie.

"Are you actually not a part of Extinction Rebellion at all, but somebody who's trying to send up the whole movement," Good Morning Britain co-host Susanna Reid said. "Because I'm not sure you're going to win anybody over dressed as a broccoli, trying to make a serious political point about how to stop climate change by changing your diet."

Mr. Broccoli didn't drop any knowledge after that either, just joking that "we are in extremely hot water about this."

When Reid tried to follow-up, Morgan unfurled his tongue and interrupted her. "Give me one...give me one fact...one scien—give me one scientific fact why I should give up eating meat," he blobbed.

"A plant-based food system is great for the environment," Mr. Broccoli stammered. (Reports have shown that even moderate reductions in global meat consumption could lower carbon emissions significantly and offer meaningful impacts on combating climate change.)

A priest and a giant inflatable octopus have also been arrested in connection with Extinction Rebellion. Maybe one of them should've been booked on the morning show instead.