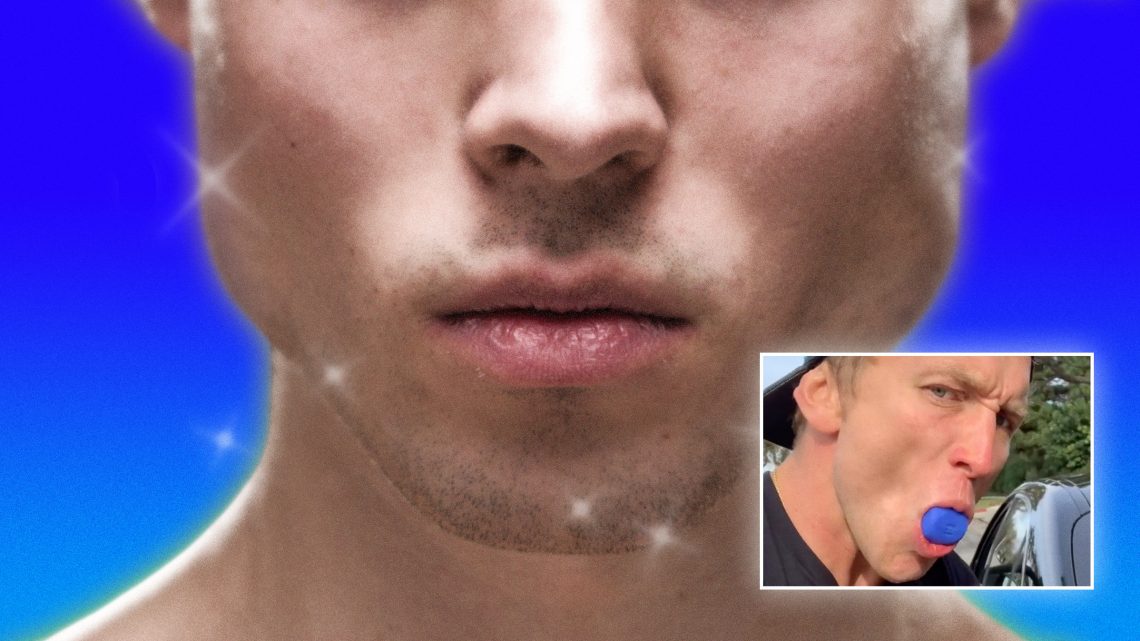 Don’t Gnaw Your Way to Hotness

There are a few reasons you might already know about Jawzrsize. If you’ve spent time researching how to “improve,” “chisel,” or “define” your jawline, you may have stumbled across the product as an option that doesn’t require fillers or implants. If you pay attention to the MMA community, you may have seen sponsored posts from Jose Torres or Ricky Glenn endorsing it. Or, maybe most likely, you might have discovered Jawzrsize through clips circulating the internet mocking it, because it’s hilarious to watch someone use one. A Jawzrsize in action looks like a combination of a ball-gag and a pacifier, a combination that amounts to viral alchemy.

Women no longer have the market cornered when it comes to hating what they look like and feeling the societal pressure to throw money at their insecurities. Men are flocking to plastic surgeons, and a May 2019 New York Magazine feature chronicled the incel pilgrimage to one Dr. Barry Eppley, the reconstructive surgeon whose talents many men reportedly believe could gift them a better face and thus, a better life. But one of the features that’s become a focal point of masculine insecurity is also one that can supposedly be altered with nonsurgical solutions by men who see room for facial improvement but lack the drive or the resources to go under the knife. For the dudes who despair over their jawline, Jawzrsize says: What's good.

Jawzrsize is a patent-pending silicon ball that users can chew on systematically in order to exercise their masseter muscle, which connects the lower jaw to the cheekbones and is most prominent below the ears, where the jaw meets the neck. The reasoning goes that an active masseter muscle is a thicker masseter muscle, and a thicker masseter muscle makes for a more defined, masculine jawline. The device comes in three different tiers, with three different levels: beginner (20 pounds of resistance), intermediate (30 pounds of resistance), and advanced (40 pounds of resistance). Each Jawzrsize is either a “pop 'n' go” model, which means it’s ready for use upon arrival, or a “custom fit,” which comes with two mouthpieces that you can boil and mold to fit your teeth. It also comes with a string, so you can wear your Jawzrsize around your neck and use it on the go, if the mood were to strike. Reviews of the device are often done by men chomping on the silicone ball as they also lift weights in the gym, doing face reps as they do body reps.

Dr. Jacob Steiger, a facial plastic surgeon who practices in Boca Raton, Florida, told VICE he gets asked about facial exercises on a daily basis. Although his clientele still skews female, he said that around one in five of the people he treats is male, and called men the “growth segment” of the last decade. “Cosmetic surgery’s not just for the girls anymore,” he said.

Steiger is familiar with the masseter muscle because it’s where he’ll inject Botox or other neuromodulators in order to thin a patient’s face into something more heart-shaped than square-jawed. Jawzrcise users, theoretically, are looking for the opposite effect. “In the medical literature, there really isn’t any good data other than small, selective studies that would show any benefit to doing any kind of facial exercises or exercises with the jaw to thicken the masseter,” he said. Steiger also expressed concern about the jaw stress that could stem from using a product that depends on chewing. “Just like when you play a lot of tennis you can get tennis elbow, or if you run a lot you can have arthritis in your knees, I would have problems with a lot of chewing, or chewing with a lot of force, with this product,” he said.

AsHBoy, a 19-year-old YouTuber from Morocco who regularly takes on “challenges” and films them, said he saw real aesthetic results from using Jawzrsize. AsHBoy posted his first Jawzrsize-oriented video, titled “BEST EXERCICE TO TIGHTEN CHIN & JAWLINE!- 30 DAYS FACE TRANSFORMATION [sic],” in February 2018. It has since garnered more than 2 million views. “I thought that everything about it was fake, so I had to go ahead and try it out,” AsHBoy told VICE. He reached out to Harris over email and the CEO sent him a Jawzrsize sample. “I proposed the video and he loved it,” AshBoy said. He didn’t enter the testing process expecting results, but ended up seeing a significant difference anyway. “My jawline got better, it got stronger and it looked bigger than how it used to look back on day one,” he said. He stopped using Jawzrsize after he stopped filming—he said he was in it for the content, not for the facial improvement—but would “definitely recommend” Jawzrsize to anyone looking for a “hotter, more manly” profile.

Jawzrsize CEO Brandon Harris maintains the reason his product has survived the mockery it has received since his company completed a successful Kickstarter campaign in July 2016 is that it works. Harris claims he has a legion of satisfied customers ready to testify in favor of the product’s unverified cosmetic and medical claims. The Jawzrsize website cites feedback from people who say Jawzrsize has helped them with “TMJ disorder, smoking cessation, lock jaw, low bite strength, post-surgery muscle restoration, circulation, and blood flow.” Harris thinks it’s capable of even greater feats, even though he’s not a doctor and he definitely—as he was careful to emphasize multiple times—isn’t making any medical claims. “We haven’t really done as much research as we would like,” Harris told VICE. “None of this is medically proven or even scientifically proven—this is just common sense.”

“It’s a rejuvenator,” Harris said. “We’re actually creating beauty from the inside out on a person’s face. This is action, a physical motion. This is the one cosmetic beauty tool that is going to change the world.”

One of the more nebulous benefits of Jawzrsize that Harris discussed was the activation of the “primal bite,” the innate human urge he said “soft, processed” modern food is unable to satisfy. (Scientists do theorize that jaw alignment in the Western world has been altered by the introduction of the knife and fork, and a diet rich in processed foods has been linked to weight gain, but the “primal bite” itself seems to be Harris’s own theory.) Jawzrsize is for you, he said, “If you have this primal bite somewhere inside you that’s just yearning to get out, you’re biting your nails, clenching your jaw, grinding your teeth when you’re sleeping, you smoke cigarettes, you’ve got oral fixations a mile long.” This was the potential use that appealed to me most about the overflowing box of Jawzrsize samples Harris sent to the VICE office. The last thing I’m looking for is facial bulk, but honestly, chewing on the beginner-level Jawzrsize felt amazing (to me! Other staffers kind of hated it. My editor worried out loud that Jawzrsize would give her “buck teeth”).

Harris said also believes, based solely on the anecdotal evidence of customer feedback, that Jawzrsize could be effective when it comes to dealing with sleep apnea, teeth grinding, “amnesia,” and stimulating blood flow to the temporal lobe.

Part of the reason Harris is such a fervent believer is that he developed the Jawzrsize with himself in mind. He’s a former MMA fighter who suffered a series of devastating jaw injuries that he says he bounced back from completely, thanks to Jawzrsize. Before, his jaw was atrophied after months wired shut. Now, when he goes to the dentist, he said they pepper him with questions and compliments. “They cannot believe my TMJ [temporomandibular joint]” he said. “They feel my face and they’re like, This is the most healthy, aligned, smoothest TMJ I’ve ever seen.”

Unfortunately for Harris, skeptics abound. Chief among these doubters are plastic surgeons.

Dr. Steven Pearlman, a facial plastic surgeon who runs a private practice in Manhattan and takes before-and-after photos of his patients for posterity, criticized the deceptive visuals of the transformation photos that flash across the homepage of Jawzrsize’s site. “Looking at the photos on this website—the first guy, he’s moving his chin forward! He’s putting his lower teeth in front of his upper teeth, behind his lips,” he told VICE. “These are not quality pictures, you can barely see the face’s anatomy.” Pearlman said his practice has its own studio with preset lighting, fixed flash, and procedural guidelines to ensure the angle of the face is the same in all of the pictures his employees shoot and display. “There are ways to make a neck, jawline, eyes, all kinds of facial features look better if you just have the patient do certain facial movements or change the lighting,” he said.

Benjamyn Smith, a YouTuber, personal trainer, and movement coach who reviewed Jawzrsize, sought the product out for non-cosmetic reasons. He told VICE that he bought Jawzrsize after experiencing jaw discomfort and night grinding, which he concluded was caused by the headrest in the truck he drove for his primary job at a utility company (without the consultation of any kind of doctor). He picked up a Jawzrsize “masterpack,” again without heading to a doctor or dentist, because he said he “felt that I had enough knowledge in this area to evaluate the cause of the issue and a reasonable solution, aka rehabilitative exercises,” a move he said he doesn’t recommend other people make. (We second that conclusion.) Within three months, Smith said his night grinding stopped and his jaw was back in line with his head and neck. “For me it was very beneficial, but I was also very aware of why I was using it and what I was doing it for,” Smith said. “I’m not shaving my beard to evaluate whether it changed the way my jaw looks, especially considering that’s not why I bought it in the first place.” Smith has since stopped using Jawzrsize. He has also switched jobs, and said his jaw issues have not recurred.

Both Smith and AsHboy felt Jawzrsize was overpriced (a single piece is priced at $34.95, and a set of three is priced at $69.95), and warned against potential tooth damage from overuse. “It’s like any other workout,” Smith said. “You can go lift weights in a way that’s beneficial to you, but you can also lift weights in a way that you’re gonna hurt yourself. This product is no different. You can’t just grab it and start gnawing away on it and expect to get what you want out of it.”

Harris knows how his fervent belief may come off to critics. “It’s also a little bit crazy,” he said. “I get it. But you think the first time Edison had a lightbulb people didn’t think he was nuts? And now look at the world!”

Pearlman, the plastic surgeon who was critical of Jawzrsize’s advertising strategy, said he wouldn’t try to dissuade a potential patient from using Jawzrsize if they were curious. “They can prove me wrong,” Pearlman said. “I don’t want to dash anybody’s hopes for a nonsurgical treatment. If I treat you now, or in a month from now or five years from now, it’s not going to change the inevitable aging process. Just let me take the pictures.”