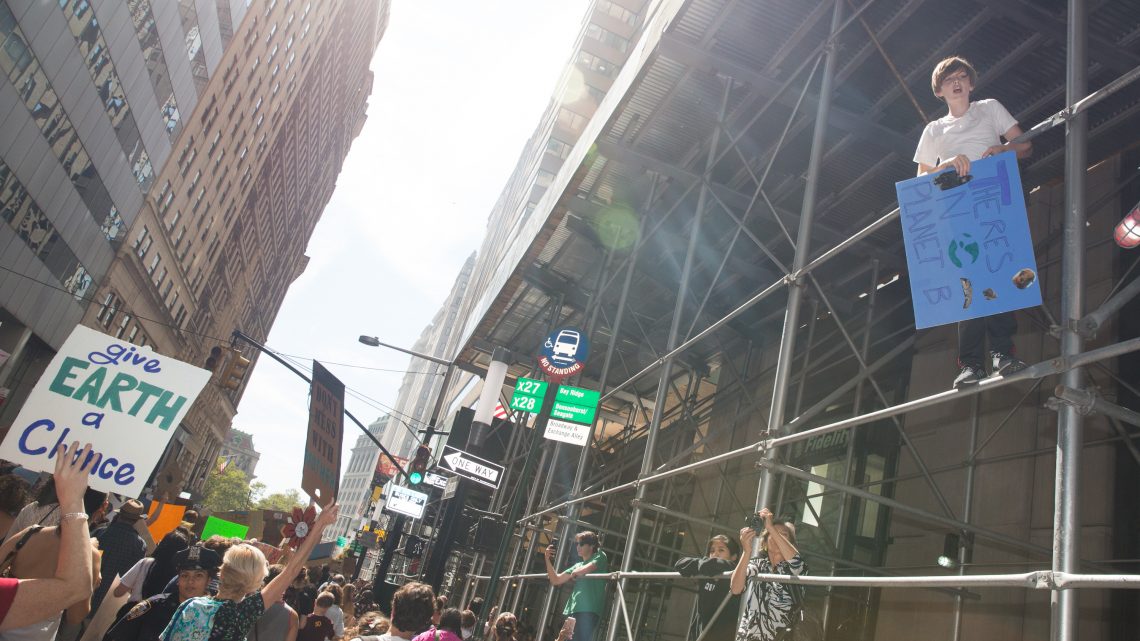 Teen Climate Strikers Are Being Treated Seriously by the UN

The official opening of a three-day emergency United Nations meeting to deal with climate change did not on the surface seem all that transformative or urgent. A list of day one events for the Climate Action Summit in New York included "Nature-based Solutions Led by Young People," "Mobilizing Grassroots Business Support for Climate Action," "Aligning Public and Private Finance With the Paris Agreement" and one that was simply titled "Cement and Concrete."

But there were clues that four years after the signing of the Paris agreement, a time when climate reactionaries like Donald Trump and Brazil's Jair Bolsonaro are pushing the world ever closer to an irreversible tipping point while global emissions inch inexorably upward, the UN leadership is becoming more open to the idea of previously unthinkable economic change.

Consider the radical young people invited to take part in the summit's opening session at the UN's headquarters in New York with Secretary-General António Guterres. "Stop the criminal contaminant behavior of big corporations," said Bruno Rodriguez, a climate activist from Argentina. "We can make this happen by standing together and saying 'enough is enough, we don't want fossil fuels anymore.'"

Or the fact that 16-year-old Swedish climate change icon Greta Thunberg, who inspired a global school strike movement calling for the immediate phase-out of oil, coal and gas, and who on Saturday sat stiffly in a lime-green chair next to Guterres, was deferred to and treated like an international celebrity by just about every person in a position of authority she encountered on UN grounds.

Upon arriving to the UN visitor's plaza, Thunberg was quickly escorted to an interactive exhibit called Pollution Pods, where she was led by its creator Michael Pinksy and a World Health Organization director named Maria Neira through a series of clear domes mimicking the poor air quality of cities like London, Beijing and New Delhi.

"What do you think about bringing the health argument, do you think it will contribute to the climate change [debate] because people maybe might be very motivated by their own health?" Neira asked the teen as cameras snapped all around them.

Thunberg, who for the previous 10 minutes had listened intently but unsmilingly to Pinsky and Neira, replied, "Yeah, I think definitely because if we see the clear connection then it makes it much easier to connect the dots and make us want to stop this problem." 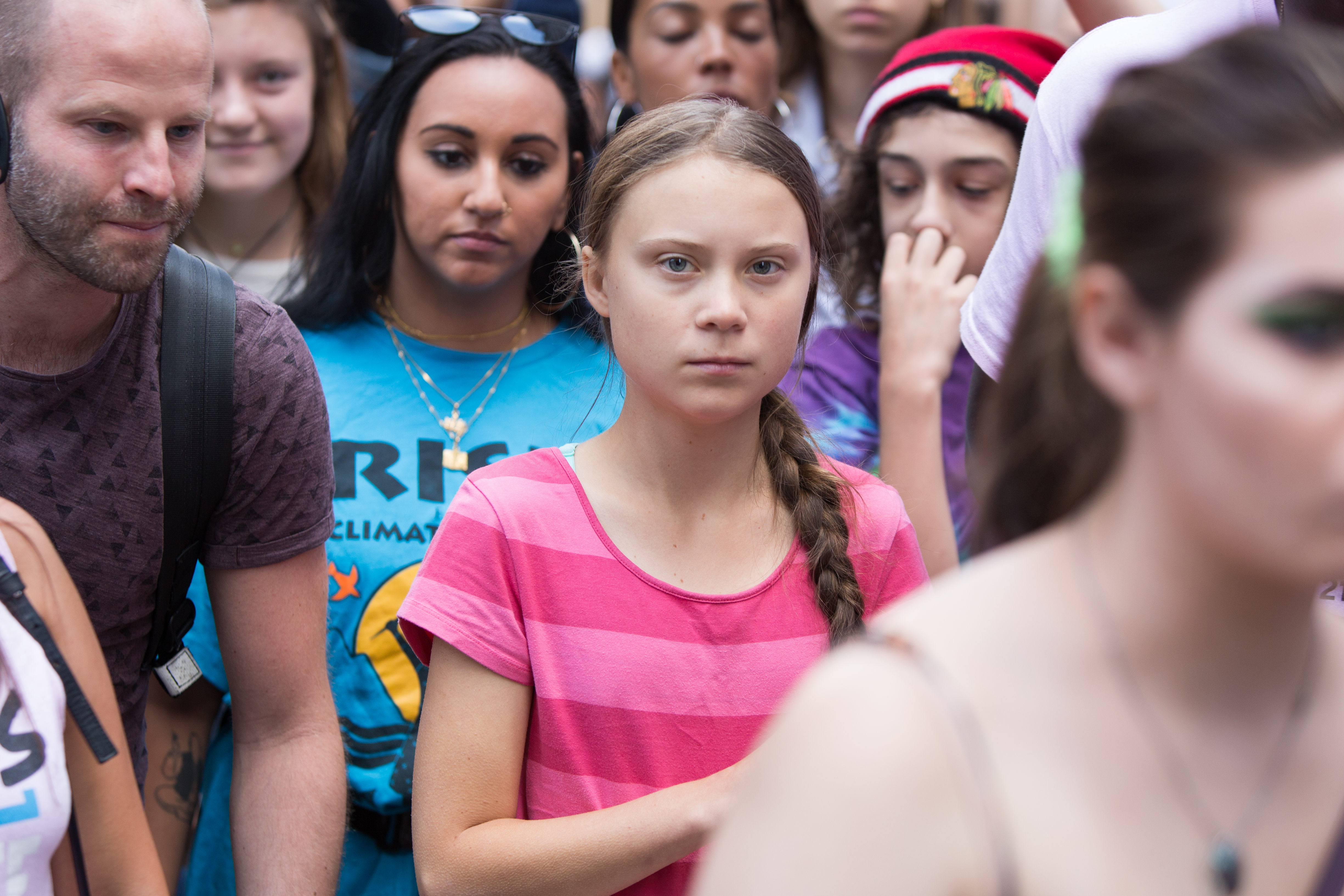 But the millions of people who participated in protests in 150 cities across the world have moved beyond connecting the dots. They are demanding their governments take aggressive action commensurate to the scale of the problem—meaning immediate moves to drastically reduce the amount of worldwide carbon emissions, far beyond what is required by any UN treaty so far.

"We are going to need tens of millions of Americans to join us in the streets," Varshini Prakash, the co-founder and executive director of the Sunrise Movement, told young climate strikers gathered in Manhattan's Foley Park. "If we are going to win we have to bring society and our economy to a standstill… Can you imagine striking not just for one day but day after day, marching and demonstrating incessantly, even shutting down our cities and schools and businesses?" 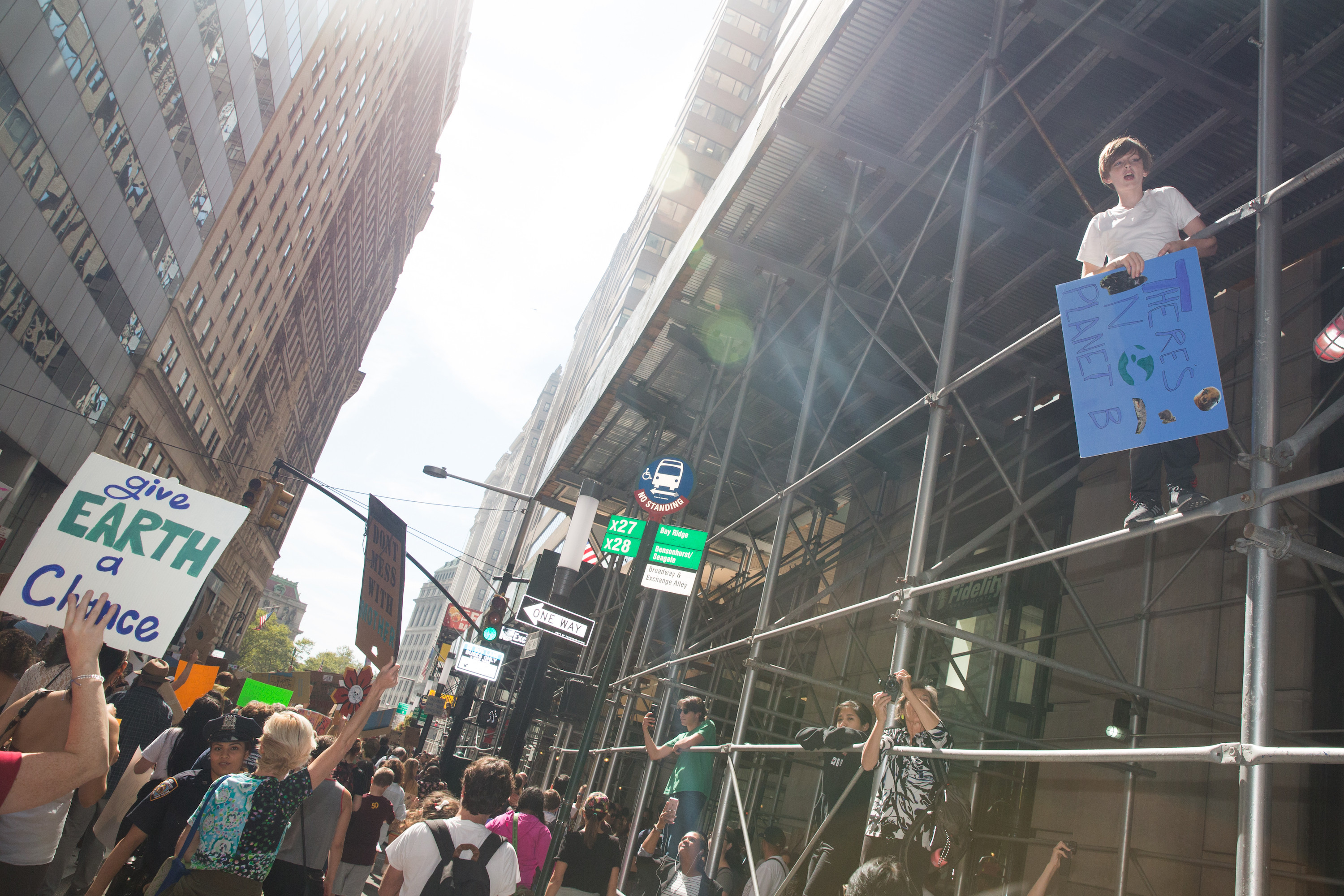 Later that day Thunberg addressed a crowd in Battery Park that Global Strike organizers estimated at 250,000 people. "Everywhere I have been the situation is more or less the same, the people in power who write beautiful words are the same, the number of politicians and celebrities who want to take selfies are the same, and the promises are the same and the lies are the same," she said to roaring approval. "We will hold those responsible for this crisis accountable and will make the world leaders act. We can and we will."

Those don't sound like words often uttered by UN leaders, who tend to use the cautious non-committal speech of career diplomats. But on Saturday morning Secretary-General Guterres commended the young strikers who for a few hours had marched through New York's financial district, hundreds of whom had shouted "Shut down Wall Street!"

"We are not yet there," Guterres said of addressing the climate emergency. "We still have subsidies to fossil fuels, we still have coal plants being built."

A crowd of protesters.

A couple hours later the UN put out a press release summarizing the morning's event. "The Summit opened a dialogue between youth and decision makers, putting young people in the driving seat with voice and agency to realize their potential and the change they are persisting towards climate action," it read.

It suggested that UN leaders were eager to support a more radical and confrontational grassroots climate movement than has previously existed, even if the press release's anodyne language struggled to convey it. That's unlikely to satisfy many of the strikers. As Thunberg said, at this point they are looking for far more than words.

Geoff Dembicki is the author of Are We Screwed? How a New Generation Is Fighting to Survive Climate Change. Follow him on Twitter.