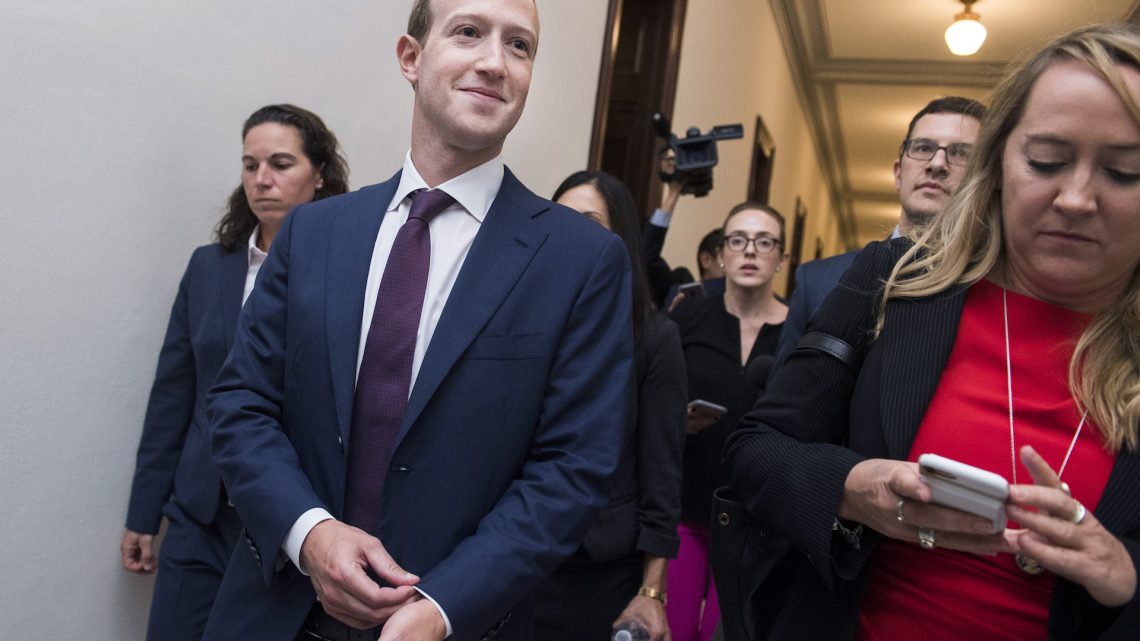 Mark Zuckerberg Just Turned Himself into a Congressional Piñata

WASHINGTON — After spending the last few years on an apology tour for various scandals, Mark Zuckerberg is now allowing some of his loudest critics to take their swings at him preemptively.

In a series of rapid-fire meetings starting Wednesday night, the Facebook CEO tried to woo Washington as Congress debates new regulations and some Democratic presidential candidates propose breaking up Big Tech. Zuckerberg continued to flit around Capitol Hill Thursday to meet with lawmakers that have bashed the company for privacy lapses, alleged anti-conservative bias, and anti-competitive behavior.

His sitdown with Missouri Republican Sen. Josh Hawley, who’s become one of Silicon Valley’s most vocal critics, lasted more than an hour.

It was Zuckerberg’s first visit to Capitol Hill since he testified before Congress after the Cambridge Analytica revelations last year. But if the executive’s goal was to build trust with lawmakers who’ve dialed up the heat, he’s not fully delivering.

“There's a lot of words that emanate from Facebook. The company talks a lot,” Hawley said. “I'd like to see some action.”

The freshman senator told reporters that he pressed the Facebook founder about the company’s history of buying potential competitors, as it did with Instagram and WhatsApp. Hawley and others have questioned such actions in a series of high-profile hearings on Capitol Hill over the past year.

Hawley added that he suggested selling WhatsApp and Instagram. “My concern is that they are trying to integrate data across all of these platforms, taking it without people's consent, using it without their knowledge,” Hawley said. “I think it's safe to say that he was not receptive to those suggestions.”

Zuckerberg and a handful of aides were mobbed by reporters as they left lawmakers’ offices. He declined to take any questions.

His other scheduled meetings Thursday included Republican Sens. Tom Cotton, from Arkansas, and Mike Lee, from Utah, who heads the Senate Judiciary Committee’s antitrust panel and has lambasted the company over its alleged bias against conservatives.

Hawley told reporters that he also mentioned bias, which Zuckerberg acknowledged “is an issue that they have struggled with internally for years.” Hawle also echoed previous calls for the company to submit to a third-party audit and then make its findings public to prove it’s taking such claims seriously.

But Hawley said the CEO wouldn’t agree. In fact, Hawley said he left the meeting with no firm commitments from Zuckerberg on any issues.

“The participants had a discussion touching on multiple issues, including the role and responsibility of social media platforms in protecting our democracy, and what steps Congress should take to defend our elections, protect consumer data, and encourage competition in the social media space,” Cohen said in a statement.

She described the meeting to VICE News as more of a listening tour for Zuckerberg than an opportunity to make his pitch.

There were snubs as well. House Speaker Nancy Pelosi and Senate Minority Leader Chuck Schumer didn’t get any face time — and neither did Senate Majority Leader Mitch McConnell. Sen. Ron Wyden, the Oregon Democrat who authored Section 230 of the Communications Decency Act, a crucial 1996 statute that shields platforms from liability for users’ speech, also didn’t meet with Zuck.

Despite bipartisan criticism of Big Tech, how to regulate it remains an open question. Lawmakers have proposed a number of measures aimed to improve data security, political ad transparency, and other areas. But they’ve all floundered in a divided Congress.

READ: Congress is coming for the emails of Big Tech

On Thursday, Hawley suggested that Zuckerberg’s visit could be an attempt to influence the process.

“Usually they [big companies] love to design regulatory schemes themselves, and they usually design them so that only they can comply with them,” Hawley said. “And so they'll kill all competition. I pointed out to him he has no real competition.”

Silicon Valley has already spent heavily to lobby Congress. Facebook, Amazon, Apple, and Alphabet have poured a combined $26 million into such efforts so far this year, according to the Center for Responsive Politics. Zuckerberg’s trip to Washington this week once again added a personal touch to this push.

In March, he called for new internet regulations in an op-ed for The Washington Post. The proposals included standardized rules for reducing the spread of harmful content, verifying political advertisers, and protecting user data.

“[P]eople shouldn’t have to rely on individual companies addressing these issues by themselves,” Zuckerberg wrote. “We should have a broader debate about what we want as a society and how regulation can help.”

Cover image: Facebook CEO Mark Zuckerberg makes rounds of meeting in Russell Building where he discussed technology regulations and social media issues with senators on Thursday, September 19, 2019. He was making his way from a meeting with Sen. Mike Lee, R-Utah, to one with Sen. Josh Hawley, R-Mo. (Photo By Tom Williams/CQ Roll Call via AP Images)