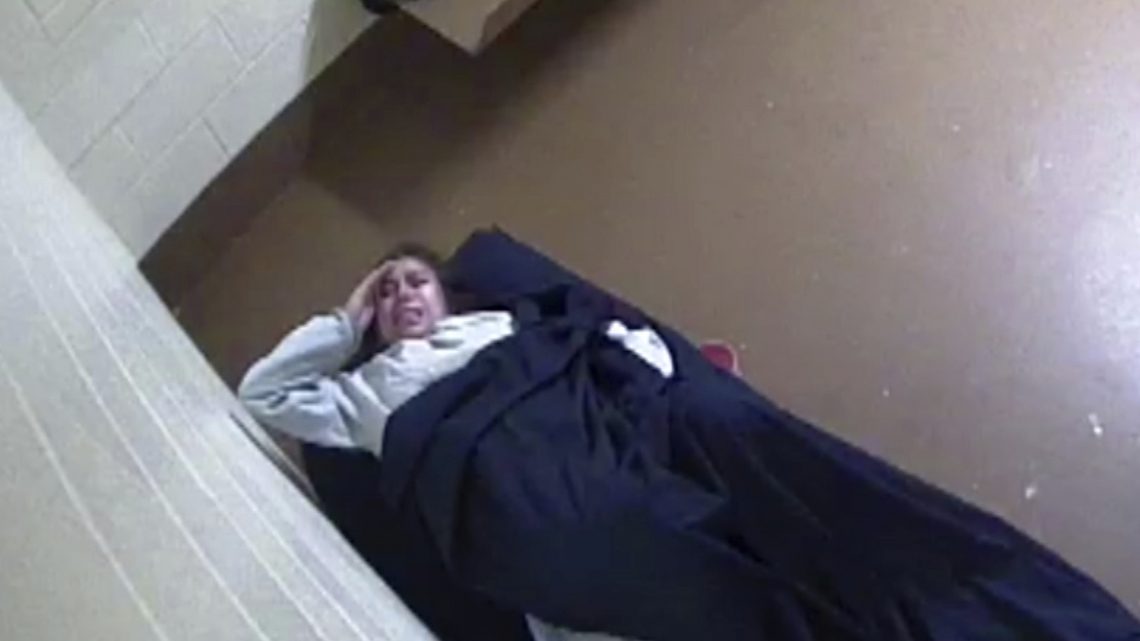 A Colorado woman was forced to give birth alone in a jail cell, while an official stood outside her cell and a nurse avoided checking in on her, according to a lawsuit filed in Colorado federal court this week.

When Diana Sanchez was booked into Denver County Jail on July 14, 2018, officials noted that she was more than eight months pregnant, the lawsuit alleges. At the time, Sanchez was already in the beginning stages of labor, and had a medical history that suggested she might have a high-risk pregnancy and early delivery.

On July 30, Sanchez started feeling contractions, a sign of active labor. By the morning of July 31, she’d told nearby authorities and nurses that she was having contractions at least eight times, the lawsuit alleges. But even when Sanchez’s water broke and her underwear became bloody, a nurse only gave her a pad, according to the lawsuit.

In a video feed of the incident, Sanchez can be seen carefully spreading the pad out on her cot.

At around 10 a.m. on July 31, that nurse also ordered a “non-emergent van run to the hospital” — a request that officials allegedly knew could take hours to actually get Sanchez to the hospital, because the van would only leave after the new inmates were booked into the jail. At least five people were allegedly aware, at this point, that Sanchez needed immediate medical help at the hospital.

No one called an ambulance, the lawsuit alleges.

“Throughout this entire time, Ms. Sanchez’s painful labor was obvious to jail and medical staff alike, via a video feed from her cell,” the lawsuit alleges. “Despite the fact that Denver and Denver Health medical staff were supposed to be monitoring her via video, they took no action to provide the emergency medical care that was so obviously necessary.”

When a deputy realized that Sanchez’s pad was soaked through, a nurse said that Sanchez would still have to wait for the van, per the lawsuit.

When she realized that there would be no more medical help, Sanchez took off her underwear and yelled that the baby was coming. In the video, Sanchez appears to be screaming in pain and awkwardly trying to lie on the cot, resting entirely on one side of her body as she gives birth.

At this point, a deputy allegedly standing outside the cell called for nurses to help. But, the lawsuit alleges, “No nurse would arrive until after Ms. Sanchez had delivered her baby.”

Even after the birth of “Baby J.S.M.,” as Sanchez’s son is identified in the lawsuit, nurses were allegedly unable to really care for the infant. For multiple minutes, they didn’t dry or warm him, clear his mucus, apply antibiotics or antiseptic eyedrops, or give him other types of injections that infants regularly receive right after birth, according to the lawsuit. They didn’t even have an OB-GYN kit available, and couldn’t find the necessary equipment needed to clamp the umbilical cord.

“Ms. Sanchez endured the physical and emotional agony of childbirth alone, a few feet from a toilet bowl, on a thin jail mattress soaked with her blood and amniotic fluid, because the Denver jail staff and Denver Health nurses responsible for her care decided to risk her well-being and that of Baby J.S.M. rather than go to the trouble of calling an ambulance,” the lawsuit alleges.

Sanchez’s lawsuit names two nurses, four sheriff’s deputies, the city and county of Denver, and the Denver Health and Hospital Authority — which oversees the nurses who worked at the Denver County Jail — as defendants. Sanchez says the defendants were negligent and violated her civil rights.

Neither the Denver Sheriff’s Department nor Denver Health immediately replied to a VICE News request for comment.

"We empathize with anyone who is in jail while pregnant, including Ms. Sanchez," Denver Sheriff Department spokeswoman Daria Serna said in a statement to USA Today. "We contract with Denver Health Medical to provide comprehensive medical care at both of our jails.”

She went on, “Ms. Sanchez was in the medical unit and under the care of Denver Health medical professionals at the time she gave birth."

Serna declined to provide further comment due to the pending comment, but told USA Today that inmates in labor are now always taken to the hospital.

Denver Health also declined to comment on the lawsuit.

“Denver Health provides high quality medical care to thousands of inmates every year," Denver Health spokesperson Simon Crittle told USA Today. "Our patients are our number one priority and we make every effort to ensure they receive the proper care."

Brexit Gloves Come Off, Let the Massacre Begin Says Eurointelligence
The Charleston Shooter Should Never Have Been Able to Get a Gun. Now, Victims’ Families Can Sue the Government Over It.