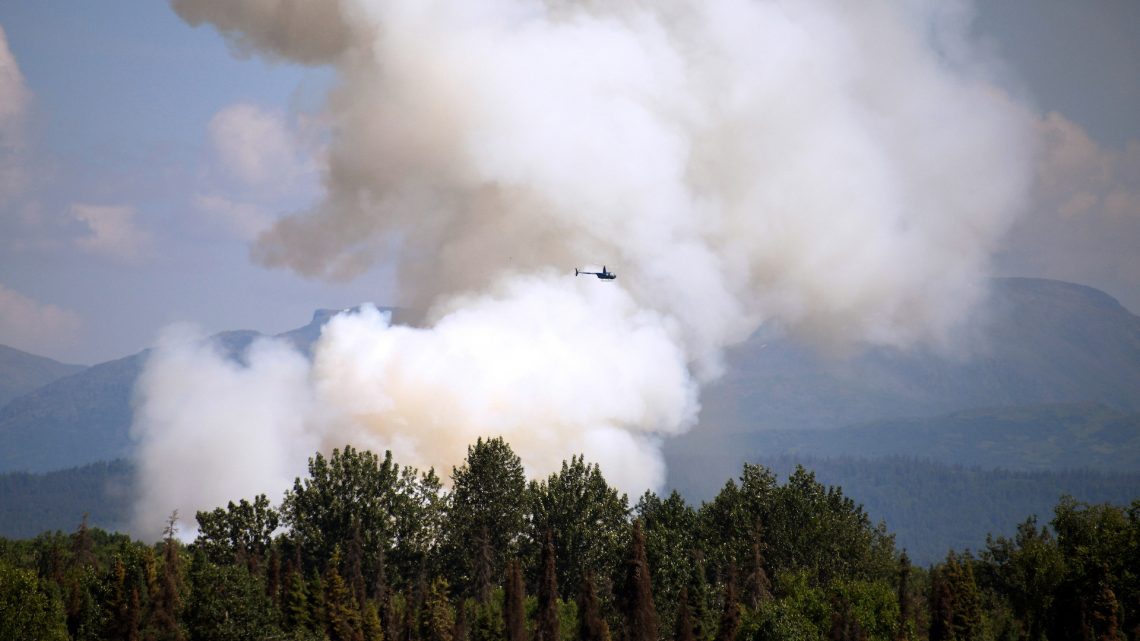 Alaska Is on Fire. Bugs Are Making It Worse.

Hundreds of people have been evacuated in Alaska as wildfires tear through some of the state’s most populated areas.

Gray smoke billowed over the city of Anchorage, where schools shut down, and air quality levels were off the charts. More than 80 structures have burned to the ground in the state as a result of the fires — and a number of those were homes. About 400 people have evacuated north of Anchorage, and the fires are currently burning over nearly 150,000 acres.

The record-breaking heat of the last few months, the historic drought, and some unlucky lightning strikes have sparked fires that have already burned almost 3 million acres this summer in Alaska. More than 800 firefighters, some of whom flew up from the Pacific Northwest, are currently battling the flames in the south-central part of the state.

Fire is a natural part of the ecosystem in the boreal forests of Alaska. But these fires aren’t normal. “It's not unprecedented, but it is extremely uncommon to have fires this late in the season,” said Brian Brettschneider, a climate scientist at the University of Alaska Fairbanks.

But drought in the state, on the scale the state has seen this summer, is unprecedented. August in Alaska is normally rainy season, but there’s been very little rain this year. In fact, Brettschneider said that Alaska has never really had to contend with drought at all.

“We literally don’t have a definition of drought,” Brettschneider said. “We've never really had to think about it before, and we don't have really good metrics for what constitutes a drought.”

Another element of the fires that’s off the charts: just how bad the air quality has become. The EPA’s traditional chart doesn’t have a category for the levels of particulate matter in the air around Anchorage this week.

One fire, within the Anchorage city limits, was a wake up call for Alaskans. That fire could have engulfed residential areas in flames, and Brettschnieder said that has people in Anchorage worried that a fire could tear through their city in the coming years.

Plus, the boreal forests around Anchorage have seen infestations of spruce bark beetles, bugs native to Alaska that thrive in warmer weather. During this year’s hot summer, they’ve made themselves comfortable. They burrow into spruce trees, killing them and essentially turning them into kindling for fires.

And the summer has indeed been hot enough for those beetles to thrive. June was the second-hottest June in Alaska on record, and July shattered previous heat records to become the hottest month in Alaska’s history. Anchorage was so hot (90 degrees Fahrenheit) on July 4 that people broke out their bathing suits and hit the beach. And this month is expected to be the hottest August on record, Brettschneider said.

That heat is leaving vegetation, already consumed by beetles, dried out and ready to burn. The largest fire in Alaska right now — the Swan Lake fire, burning over about 140,000 acres — was started by a lightning strike on June 3. The other initial four fires, ranging in size from about 50 to nearly 4,000 acres, are all believed to have been started by humans.

“It is a glimpse into our future of fire ecology, in Alaska, and frankly, in all of the Arctic,” Brettschneider said.

Cover image: A helicopter passes by as smoke rises from a wildfire on July 3, 2019 south of Talkeetna, Alaska near the George Parks Highway. Alaska is bracing for a dangerous fire season with record warm temperatures and dry conditions in parts of the state. (Photo by Lance King/Getty Images)