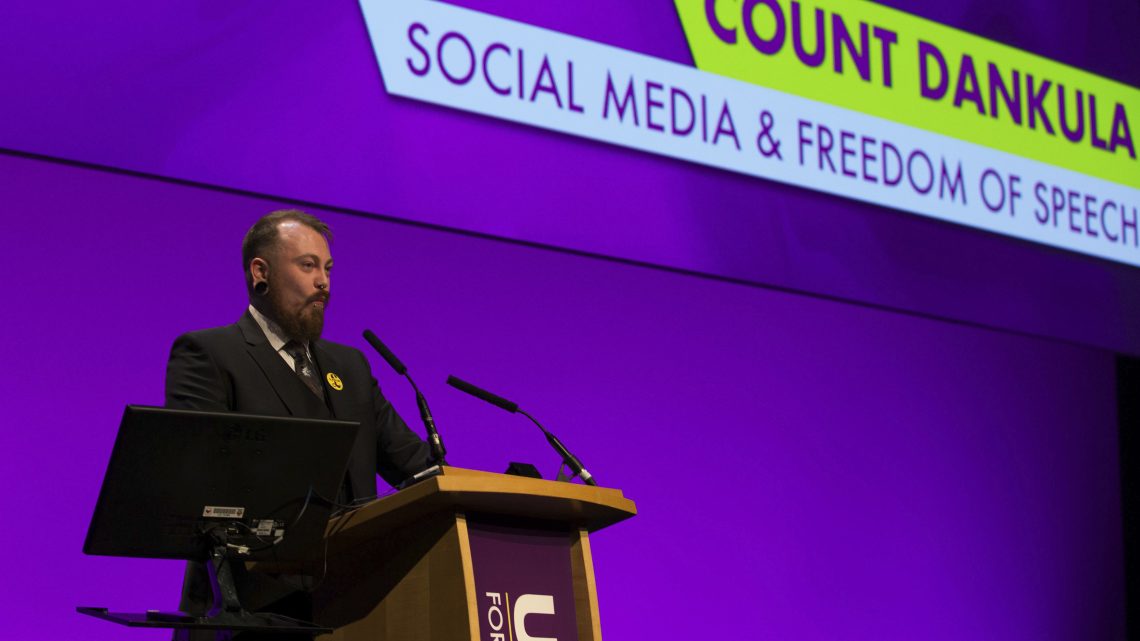 The Nazi Dog Guy and Other ‘Free Speech’ Activists Tried to Throw a $150 Event, But New Jersey Wasn’t Having It

Slated speakers included right-wing blogger Andy Ngo, who has made a career out of peddling conspiracy theories about Muslims and leftist protesters. He recently made nearly $200,000 on GoFundMe seeking support after antifascists beat him up at a Portland rally in late June. Far-right anti-feminist YouTuber Carl Benjamin (aka Sargon of Akkad) and Mark Meechan (aka “Count Dankula"), who was famously arrested in the U.K. for sharing videos of his dog learning how to do Nazi salutes, were also expected to speak.

The event, organized by the cryptocurrency alternative social media company Minds planned to bring together controversial internet personalities and trolls to talk about “Ending Racism, Violence and Authoritarianism.” Minds, by the way, was the only social media company to appear alongside a bevvy of MAGA-world celebrities at the White House’s recent “Social Media Summit,” where President Trump alternately bragged and grumbled about his fluctuating follower counts on Twitter for nearly an hour.

READ: The White House social media summit was as bonkers as we expected

With tickets at $150 a pop, the conference was meant to be the first in a series of events promoting “viewpoint diversity.” But local activist said that description was disingenuous, and bombarded the theater with phone calls complaining. A similar event at the Broadway Theatre last year, featuring right-wing pundit Anne Coulter, also drew protests.

“I think that it’s a smokescreen, as much of what they do is,” said Daryle L. Jenkins, a local antifascist organizer who has helped coordinate opposition to the conference. “They knew all that they had to do was call it that, to get their base of fans to start yelling at people who are opposing the event.”

On Wednesday, the Broadway Theatre in Pitman, New Jersey, located about 20 miles from Philadelphia, decided to cancel the event. Republican Pitman Mayor Russell C. Johnson III confirmed that the theater had cancelled the event in an interview with the Courier Post. Pitman is small, with a population of about 9,000, and overwhelmingly white.

While the mayor recognized that the conference appeared to represent both sides of the political spectrum, he said he wanted “no part in it.”

“I’m as happy as can be,” Johnson told the Courier Post. “I don’t want the ripple effects on my streets.”

“It was a vague threat”

In addition to Benjamin, Meechan, and Ngo, other speakers would have included comedian June Lapine, who has made provocative statements like calling Black Lives Matter “black supremacy trash” and saying black comedian Leslie Jones looked “like a gorilla.”

Not all speakers are so clearly right of center. Self-avowed centrist Tim Pool, whose YouTube channel has broad appeal, including with the alt-right, was also billed as a speaker. He’s a former VICE News employee turned YouTuber who became famous for live-streaming the Occupy Wall Street protests in 2011. Brittany Simon, a YouTuber known for her educational videos about BDSM, was also expected to speak, as was Rucka Rucka Ali, a white rapper known for songs satirizing race relations, with tracks such as “I Don’t Like Minorities,” “I Don’t Like White People,” “Emo (Like a Nazi),” and “I Know a Black Guy.”

READ: Hundreds of far-right protesters and antifa activists face off in Portland

A spokeswoman for Minds told Breitbart earlier this week that antifa had threatened to burn down the theater. It’s not clear who made the threat or when it was made, but the rumor quickly caught fire in right-wing media circles.

A spokesperson for Minds declined to provide VICE News with evidence of the threat.

“The mayor and police have already commented on the threats,” the spokesperson told VICE News. “Due to the severity and ongoing nature of the matter, we will defer to the authorities as they continue their investigation.”

The Broadway Theatre’s Twitter account was also hacked for several hours last Friday. The Minds spokesperson said that the group originally learned of the threat from theater personnel “during a phone call shortly after the theater’s Twitter account was hacked.” Minds also assured attendees that they will have a new venue lined up shortly.

READ: Minds, the Anti-Facebook, Has No Idea What to Do About All the Neo-Nazis

Pitman Police Chief Daniel J. McAteer told VICE News that they were informed about a threat against the event made via social media. He added that the theater itself has not received any threats and that it’s an ongoing investigation. The police are also providing off-duty security, funded and requested by the organizers.

“We’ve not been able to confirm the veracity of the threat, or the person initiating it,” McAteer said. “It was a vague threat, but it wasn’t vague in the effort of us taking full precaution and using investigative powers trying to track it down.”

Now, local activist groups are ramping up pressure on a local bar, which has agreed to host the conference’s after-party with tickets at $75 a piece. But Jenkins, the antifascist activist, hadn’t seen any evidence of a threat to burn the theater down.

“Nobody was threatening any kind of violence whatsoever,” Jenkins said. “While it is not uncommon for those circles to make such unfounded and ridiculous assertions, it must be stressed that any protests will be peaceful.”

‘Family-Friendly’ Occupations for Women Are a Myth