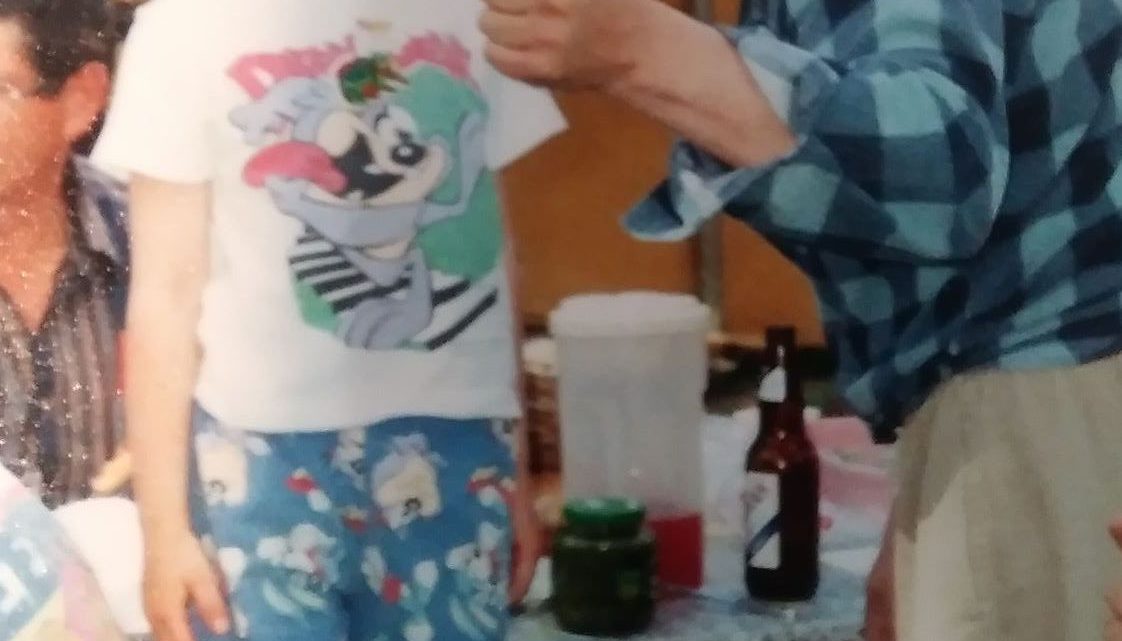 Two weeks ago, I was back in my hometown of Sault Ste. Marie in northern Ontario. I was there for a week that was bookended by two separate weddings of childhood friends. In between the nuptials I spent my time ambling around the recovering steel town, soaking in feelings of nostalgia and The National-style melancholy.

During one of these joint-assisted strolls, I was fantasizing about running into my dad, who still lives in the city. I hadn't seen him in three years. He has a coke problem. I was wondering what running into him would feel like and how it would go, when suddenly I turned a corner and there he was. My father. He was standing there in all his glum glory, smoking a bent cigarette. He looked anxious, as if he were ready to tell someone he doesn't have their money.

"Holy shit. Look at this guy," I called out to him, some casual vulgarity to stem a sudden onset of nerves. He glanced at me puzzled, not sure if it was him I was talking to.

I ran into my father for the first time in three years and he didn't recognize me.

During the past three years, Dad existed more as a rumor. Whenever I visited my hometown, friends would tell me about spotting him, ambling around the margins of Sault Ste. Marie like some sort of urban legend.

These tales would unleash a flood of guilt, regret, and relief in me. The official reason I told myself for not seeing my father was he was impossible to get a hold of. This was a lie. The real reason was that I didn't want to. It hurt too bad. The pain of seeing my father continually erode into a pitiful figure—all missing teeth and rummy eyes, dressed in the discordant, used-clothing wardrobe of the perennially downtrodden—was too much.

I loved him, despite everything. My childhood and adolescence was spent being disappointed and attempting to navigate the distance between when he was the "good" dad I idolized and when he would spend days sleeping on the couch. This feeling of helplessness and loss would be matched with frustration. As the good son of an addict, properly trained in the impeccable art of pretending everything is fine even when it so clearly is not, I would fume at myself when I would see him, for my inability to point out that the elephant in the room was trampling the villagers to death. 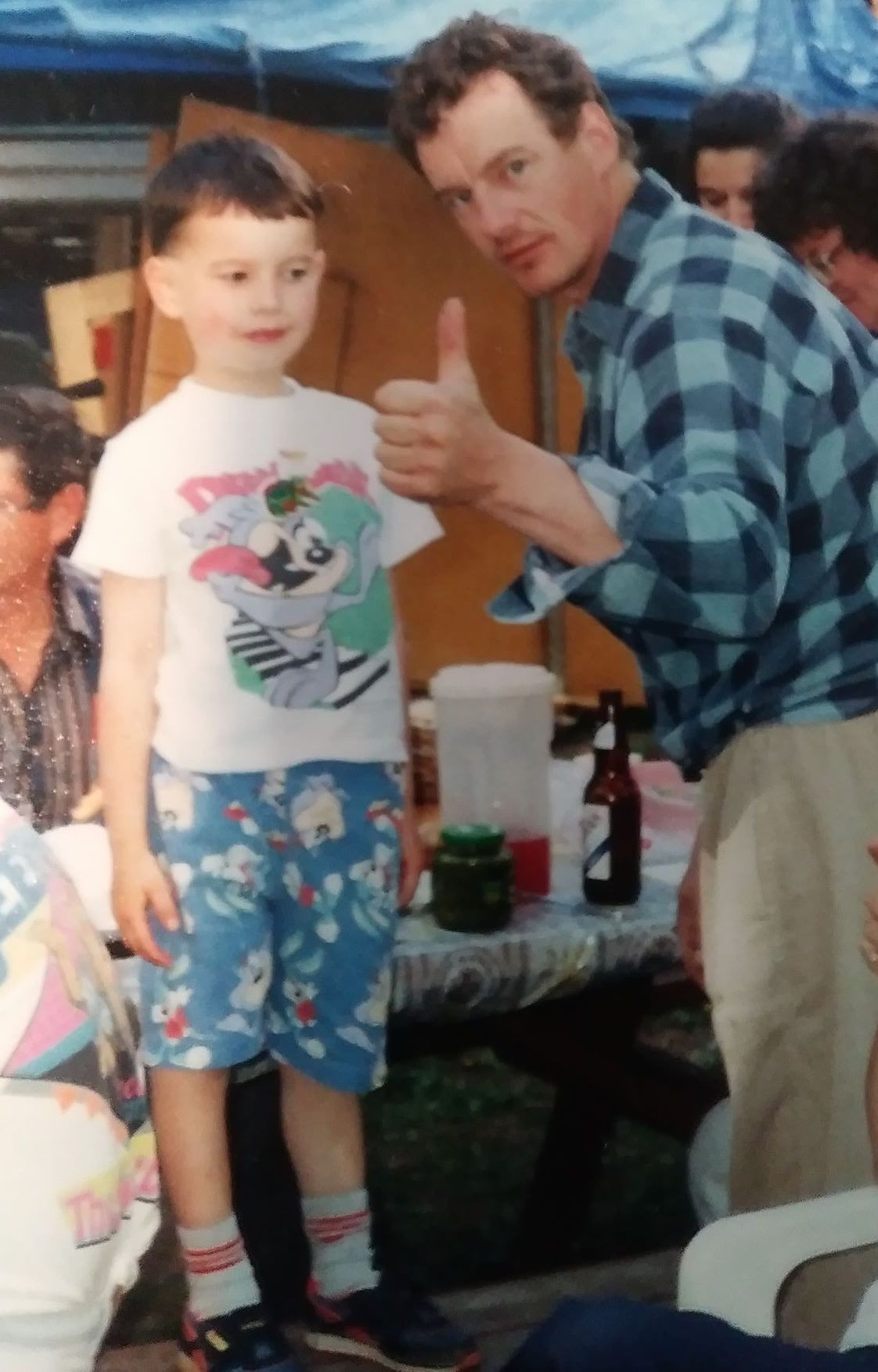 I didn't want to talk to him because of how much I wanted to talk to him, how much I desired some sort of catharsis, some answers, some resolution. A lifetime of movies had left me with these fantasies of The Great Conversation: If I had enough courage, I could engage my dad in a way that would save him, and by saving him, save myself. It would end in great heaving sobs between the two of us, our arms wrapped around each other; him committing to getting clean and apologizing for all his misdeeds; and myself, born anew, filled with confidence, serenity, and, inexplicably, newfound athletic prowess.

For the past three years, I remained in this stasis: desiring some sort of confrontation and resolution but hindered by fear and the intractable patterns of my past. Then, all of a sudden, there he was.

He told me he was waiting to get picked up for a job. It was 5:30 p.m. but that's one of those observations I've learned to ignore. He asked me some questions about what I was up to, asked about my brothers. It was nice. We made plans to have lunch the next day. A sketchy old man came riding down the alley across the street on a bicycle. My dad said he had to talk to the old guy about supplies for the job. I don't think he had been waiting for a job.

The next day I was nervous. Was he going to show up? Did I want him to show up? He said he would pop by around lunchtime. When I asked what time that was, he responded, "I don't know... lunchtime." So, I was stuck in my mom's house while I waited to discover what time my rambling father thought was lunchtime like I was waiting for a cable guy that fixed childhoods.

There was a knock at the door at 12:30 p.m. My mom's Great Dane started barking wildly. Dad poked his head but said he was going to wait outside, that he had been bitten by a dog before and this one was making him nervous.

I didn't know that he had been bitten before. It would be the first of many stories we exchanged that afternoon. I told him about a friend of mine getting busted for having two pounds of weed and it inspired him. One after another, romantic stories of a debauched life came tumbling out of him. He described driving around without a license because when he was a kid the fine was only $25; accidentally taking weed over the border and getting tossed in jail; hanging out with car thieves and mobster sons; getting into huge brawls on the beach; skinny-dipping and flirting with housewives on job sites. I was transfixed. He was a character in a Bruce Springsteen song.

We hung out for hours, had lunch on a patio, and tried to shoot a game of pool but the pool halls were closed so we had to settle for another patio and another beer. It was the most fun I could remember having with him. The conversation flowed. We talked politics, and as he complained bitterly about how rough it is for the working poor and about Donald Trump being a Nazi, I was reminded of where many of my beliefs came from (and was super relieved that he had no access to Facebook).

It was fun and easy because he was finally honest with me, not only about his past but about his addiction. It's not like there would be any way to hide it. My dad is truly a solid denizen of my hometown's underbelly. He is missing teeth and is garbed in clothes that look like a donations box sneezed on him. He currently resides in a motel that's The Florida Project but with less cute kids and more electric wheelchairs. He did bizarre cokehead moves. He had to cash a check so we stopped at the bank. He grabbed a free mint and then immediately smashed it on the ground. "I don't like to eat the whole mint at once," he nonchalantly explained to me.

None of this shocked or embarrassed me because he seemed comfortable in this life. He talked openly about this "coke thing" that he had, not to brag or excuse his actions, but to simply state reality. After spending a lifetime in the shadows of his mysteries and disappointments, constantly wondering why he did the things he did, I got to see the person I had spent a childhood chasing. It was the first time I wasn't held a silent hostage by the hopes for the man I wanted him to be or the lies of the man he pretended to be. It was him—strange and heartbreaking, but him. It was freeing for me.

Not that it was painless. He complained constantly about not being able to feel his toes and having a constant pain in his swollen stomach. When I implored him to see a doctor, he dismissed the suggestion, telling me, "I've had a good run."

I realized his honesty came from his sense of fatality. He's committed to his drugs, and letting them kill him. He doesn't want to get better because what kind of life is waiting for him on the other side? He's old as fuck and torn every relationship in his life asunder.

We have these big myths of addiction and sobriety, that getting clean is always a brand new start, that it's all it takes. Sometimes all it does it let you have clear-eyed view of how badly you fucked everything up and how there's nowhere else to go. If he doesn't want to see that, I can't really blame him. I'm sure I wouldn't, either. 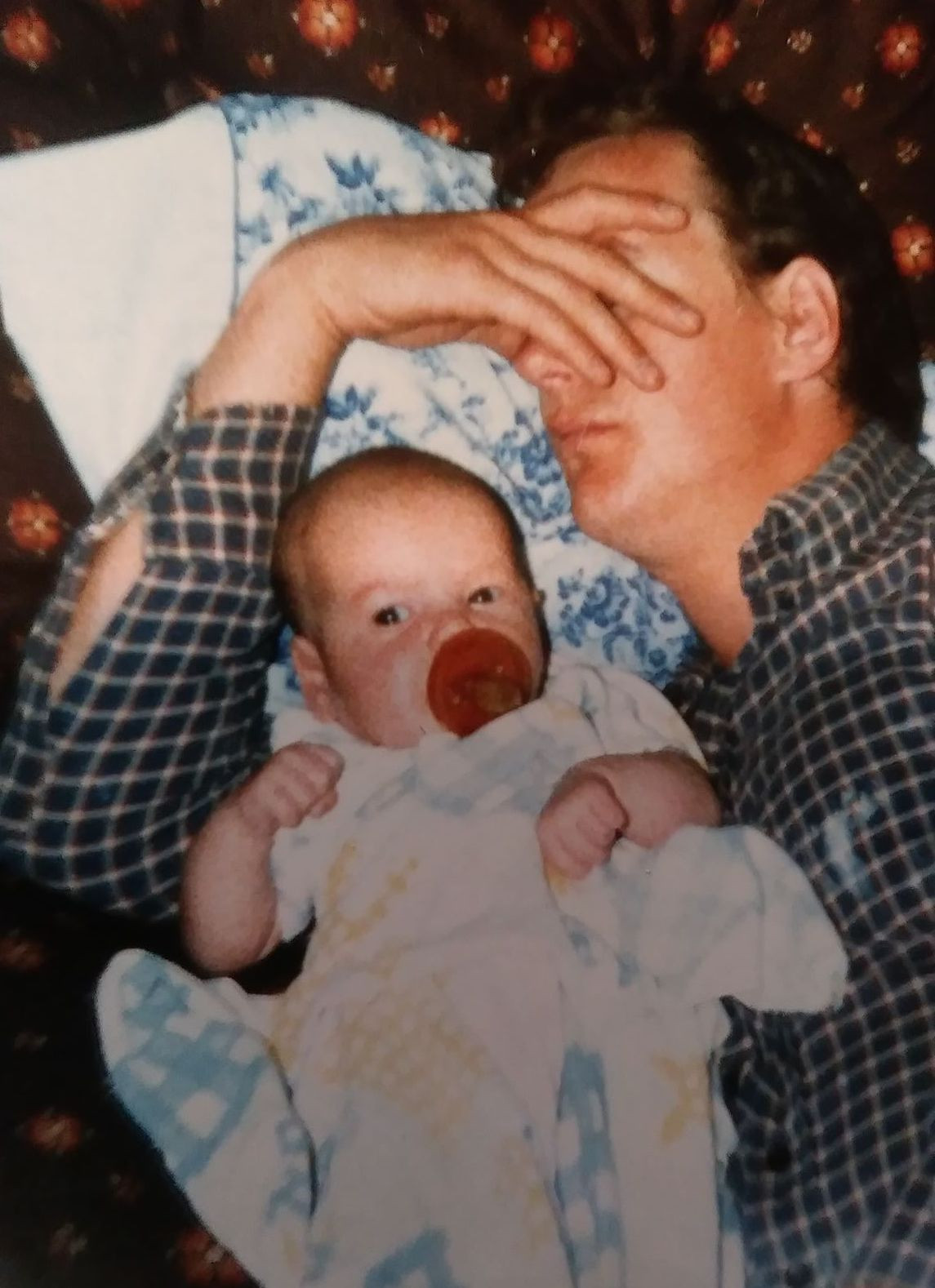 My dad and me. Photo courtesy of Jordan Foisy

He said he had a few regrets. He apologized for not always being there for my brothers and me. He wished my mom wasn't still mad at him. Most of all, he said he hated how the people closest to him could only see his addiction, that it outweighed everything else that he's done in his life. Now, admittedly, getting pity is every addict's superpower. But I couldn't help but think how I had avoided the hard work of reaching out and looking at him and justified it by cordoning him off as an addict, a failure.

I thought about the people I do that to constantly, those who I walk by in my day to day and brush off as I go from fancy patio to fancier patio. There was sadness in my dad's life but there was also community, a warmth that occurs when you're down at the bottom and forgotten about by everyone except those down there with you.

Maybe this is what forgiveness looks like. It's not an explosion of sobbing catharsis or a deathbed confession; It's an appraisal, an honest reckoning about what you've lost but also what you have. My dad's life is tragic but I also saw some beauty in it. He's lived outside the boundaries of respectable society his entire life, making the moneyed and mannered uncomfortable whether as a teenage miscreant or a senior citizen dirtbag. He did it by living according to his own code.

While we were hanging out, I watched him open numerous doors for people; we helped women unload boxes of diapers in a daycare center; he complained about young addicts he knew who never wanted to work for their cash. He was funny, opinionated, hypocritical, charming, strange, and loving. He was my father and I'm so glad that, thanks to a simple twist of fate, I got a chance to finally meet him.

We made plans to have lunch again two days later. He never showed.