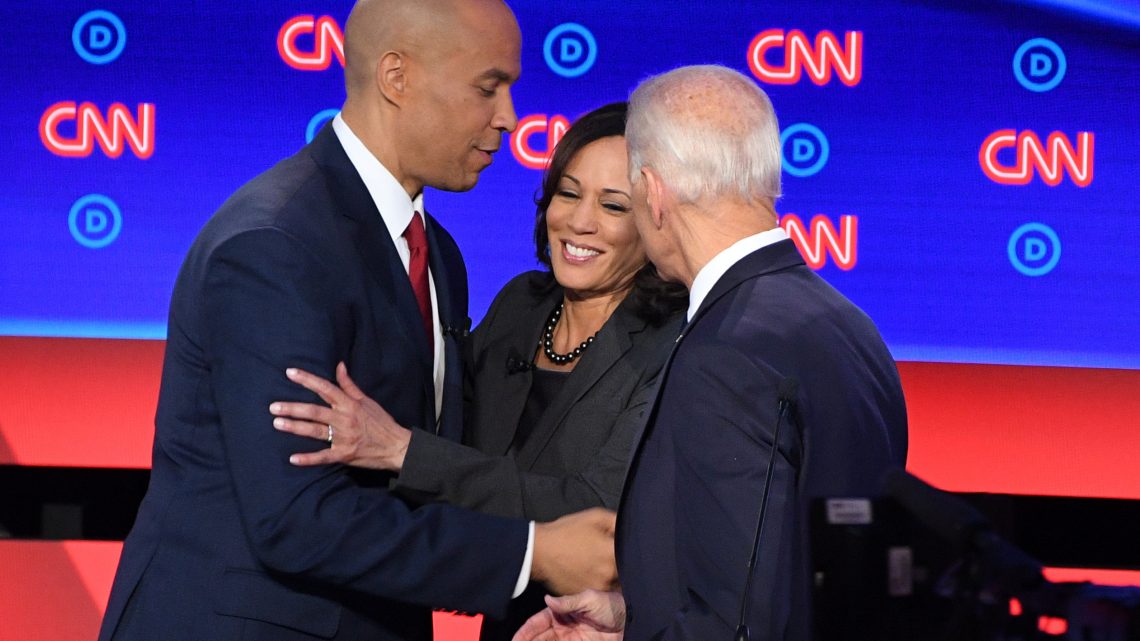 Barack Obama wasn't on the debate stage Wednesday night, but he was on everyone's mind. And for what felt like the first time in this already frenzied and strange 2020 presidential campaign, it wasn't all fawning and flattery.

Before the candidates could discuss the legacy of the last Democrat to win the White House, however, they had to overcome protesters screaming at them from the audience.

Members of the crowd began chanting loudly early on, interrupting both New Jersey Senator Cory Booker—in what might have been a spillover critique for New York Mayor Bill de Blasio—and former Vice President Joe Biden. They were apparently expressing anger and sorrow at the failure of the system to punish Daniel Pantaleo, the NYPD cop who killed Eric Garner in 2014 by way of illegal chokehold and remains on the job. It wasn't the last time Tri-State policing issues got extended play in what was ostensibly a conversation about big, national ideas. But this was a more acerbic and combative affair than Tuesday's ideological slugfest. Policy often fell by the wayside in favor of the personal.

If nothing else, the palpable mutual dislike made the whole thing a lot easier to watch.

The shift from the wonkier vibe on Tuesday was partly a product of personnel—Elizabeth Warren and Bernie Sanders were noticeably absent, and their peers struggled to talk about healthcare with even a shred of their passion or coherence. Kamala Harris, who seemed to help her campaign with a strong performance last go around, appeared unable to effectively communicate her ever-changing Medicare for All plan, and the relatively thin, nearly one-hour combative back-and-forth between the contenders on the issue did little to offer any clarity on a topic polls consistently show is near the top of the nation's collective mind.

And while much of the focus leading up to Wednesday evening was on how much and how aggressively Biden and Harris would spar on race and crime—and whether Cory Booker would get in on the action—it wasn't actually necessary for anyone to go after the vice president very hard. He once again fumbled over his words repeatedly and did little to assuage concerns over his age and mental fitness.

Others found their opportunities to shine, of course, with businessman Andrew Yang enjoying a few moments of simple policy clarity—I will give you money! is still his best selling point. Booker also seemed to realize that political debates are about vaguely corny one-liners, and delivered enough to raise hope that New Jersey's native son isn't going to go down without a fight.

Here are the moments to know about.

Biden didn't wait until the debate even started to remind people how grandpa-esque he is.

"Go easy on me, kid," he said to Harris, as he shook her hand. Though a hot mic could have been to blame, Biden certainly didn't take long to use a condescending moniker—just weeks after being critiqued for saying that a segregationist senator "never called me 'boy,' he always called me 'son,'" invoking what many, including Booker, considered to be a reference to a racist term.

Yang anointed himself the opposite of Donald Trump early on.

While his universal basic income policy plank is fairly well known at this point—or at least the thing everyone who knew him knew was central to his campaign—he keeps finding ways to be funny about it.

Protesters shouted "Fire Pantaleo" at Booker, though the demand might have made more sense had it been aimed at de Blasio.

Nonetheless, the NYC mayor suggested justice would be served in 30 days, and the mayor's campaign felt compelled to tweet about it. Whether he will actually, you know, do something five years later remains to be seen.

Julián Castro was the first to aggressively take on Biden—and Obama.

Castro tore into the Obama administration's immigration policy, setting off a surprisingly anti-Obama stretch of the evening. But not before he was interrupted by more protesters, shouting about deportations under Obama.

Biden appeared to fumble on the specifics of his proposed healthcare plan.

Biden went after Booker over his criminal-justice record.

And though Biden had what appeared to be a dossier of opposition research at his thumb, Booker did what he does best: He uttered a hokey yet easily quotable analogy.

Both Tulsi Gabbard, a military veteran and congresswoman from Hawaii, and Biden chose this route. Harris's career as a prosecutor remains a vulnerability for the surging progressive, who needs to peel off Biden support among black women in particular to break through.

Even if the planet is dying, New Jersey is alive.

Booker declared that the bar for having a good stance on climate change was remarkably low in what might have been his best TV moment so far this campaign. (He had some other solid one-liners, too.)

It wouldn't be a Democratic debate without many denunciations of Trump as racist.

But there nonetheless appeared to be at least one first:

Fed Gets Opposite Response It Wanted: Inversions Strengthen

ISM and Markit PMI On Verge of Contraction: Expect Contraction Next Month