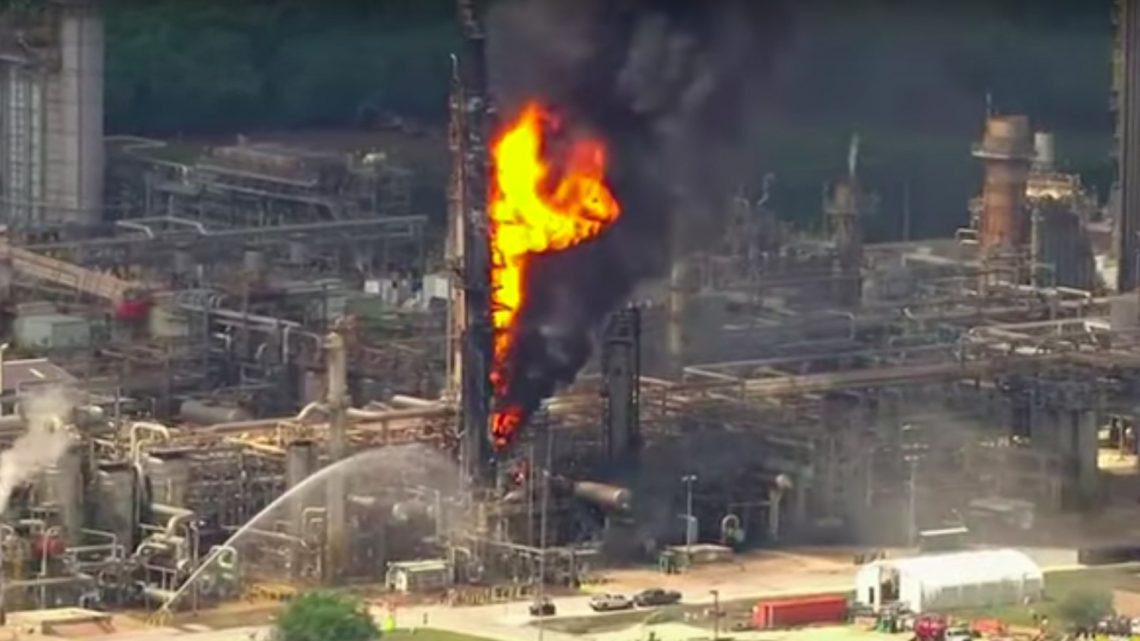 The ExxonMobil complex in Baytown, Texas—home to one of the largest oil refineries in the country—caught fire on Wednesday after a petrochemical unit reportedly exploded.

The City of Baytown warned residents to shelter-in-place at 11:35 a.m., which has since been lifted, noting a fire had broken out in an area containing polypropylene material, a thermoplastic polymer used in many common items such as plastic piping and laboratory equipment. In a press conference on Wednesday, an ExxonMobil spokesperson said the material on fire is a mixture of propane and propylene, and that staff are working to extinguish the isolated blaze.

Some people in nearby suburbs claimed to have felt an explosion loud enough to “shake windows,” reported the Houston Chronicle.

Massive flames and plumes of smoke could be seen pouring out of the Baytown Olefins plant. The facility is used for converting natural gas into plastics, and is one of the world’s largest ethylene plants according to the company’s website. Thirty-seven people are reported to have been injured by the fire, reported the Houston Chronicle. Harris County Emergency Management said in a statement that 66 ExxonMobil employees and contractors have been transported to the Houston Area Safety Council for a medical evaluation.

ExxonMobil hasn’t explained what caused the fire. But Freddie Landry, who works at the facility, told the Laredo Morning Times that he was next to the plant when it happened.

“The crane guys were moving pipe for me so we can proceed and finish our job,” Landry said. “I heard a big boom. The crane went up, and the guys said it exploded. No hesitation. We all turned around and took off.”

ExxonMobil said in a statement on Twitter that industrial hygiene staff are “conducting air quality monitoring” at the site.

A spokesperson for the Texas Commission on Environmental Quality (TCEQ) told Motherboard that it dispatched experts at 11:30 a.m. to conduct handheld air monitoring, and "is continuously evaluating the data from these monitors to asses any potential regional air quality impacts."

It’s unclear whether the fire could release harmful pollutants into the air. The shelter-in-place orders residents to stay indoors, close doors and windows, and shut off any air conditioning units.

ExxonMobil is the city’s largest employer and claims to be developing technologies that will allow it “to operate more safely and reliably.” But Wednesday’s fire is one of many accidents that have occurred at the complex.

In March, a unit that processes motor gasoline caught fire and shrouded the area in noxious smoke. The city issued another shelter-in-place in 2016 when a pipeline began leaking a highly flammable gas called dilute propylene.

Throughout 2012 and 2013, ExxonMobil reported several “emissions events” at Baytown to the TCEQ. One event spewed 57 tons of sulfur dioxide into the atmosphere in just 18 hours. Another released approximately one ton of the carcinogenic compounds benzene and 1,3-butadiene.

In 2017, the company was ordered by a U.S. district court to pay $20 million in fines for violating the Clean Air Act 16,386 times between October 2005 and September 2013. During this period, the ExxonMobil plant spilled an estimated 10 million pounds of pollutants into the atmosphere.

In a joint statement on Wednesday, Harris County Judge Lina Hidalgo and the Office of Emergency Management said that “Harris County Pollution Control is responding to the fire at the Exxon refinery in Baytown and will be collecting real-time air-quality information.”

The larger area has witnessed a slew of accidents at other facilities. In March, a fire at a petrochemical storage site burned for several days. And in April, one man died and two were injured after a chemical plant caught fire in Crosby.

The ExxonMobil incident is the latest in a growing list of fossil fuel-related accidents in the U.S. this year. The East Coast notably saw several refinery explosions, including one in June at the “largest refining complex on the Eastern seaboard,” reported Motherboard at the time.

The City of Baytown, located 25 miles east of Houston, was founded after an oil boom in the early 1900s caused an explosion of development in the region. Its main industries are oil, rubber, and chemical plants. The refinery at Baytown can process up to 584,000 barrels of crude oil per day.

This story has been updated to include a comment from the Texas Commission on Environmental Quality and to update the number of people injured by the fire.