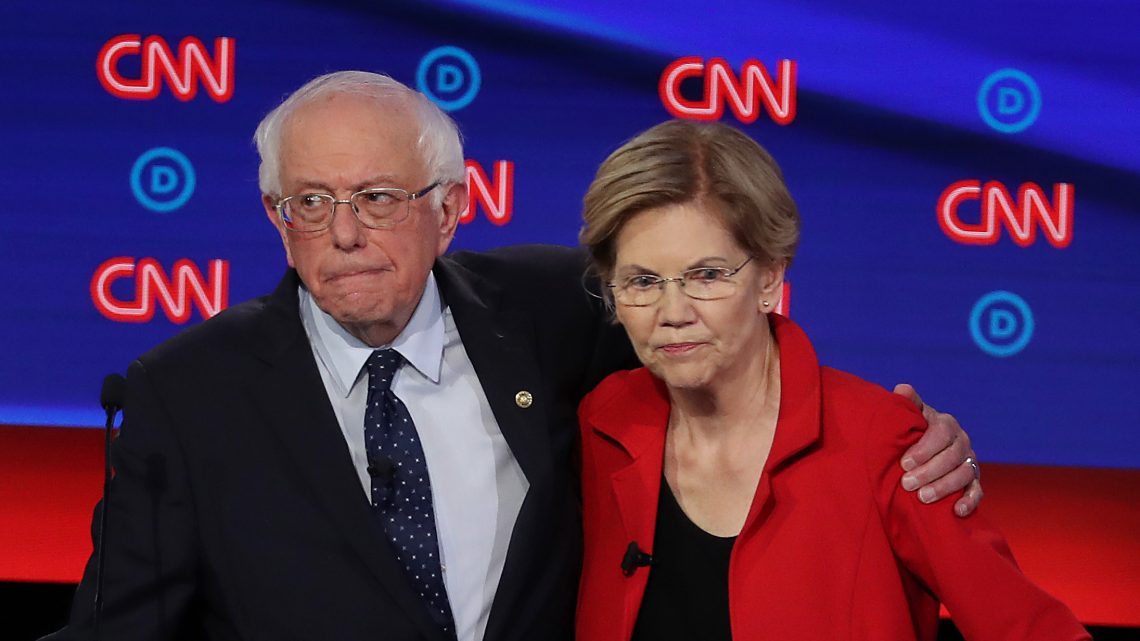 Like it or not, the first night of the second round of Democratic presidential primary debates landed on CNN on Tuesday, bringing with it nearly three full hours of moderator interruptions, squabbling, and a few cutting lines. But it also underscored how few of these ten candidates actually matter.

Bernie Sanders and Elizabeth Warren were by far both the most popular and most left-leaning figures on the stage, and there was speculation about whether they would end their de facto alliance. Instead, the two pretty much joined forces to tackle the more moderate candidates surrounding them, who appeared eager to take shots at Medicare for All and other progressive policies. This debate was much more energetic than the ones back in June, with many of the bottom-tier contenders surely aware that a failure to make an impression would doom their campaigns.

Did stragglers like former congressman John Delaney do enough, though, even with significant opportunities to speak? Eh. Here are the top moments from the debate:

"What do you say to Congressman Delaney?"

That marked the most savage exchange early on, when Sanders took Delaney to task for not being onboard with his insurance industry-ending Medicare for All plan. The Vermont senator had the demeanor of an angry uncle at the dinner table, waving his hands around and throwing one-liners in the direction of anybody who dared to challenge him. (He was so energetic that at one point later in the night, Ohio Congressman Tim Ryan told him that he didn't have to "yell.")

"We are the Democrats. We are not about trying to take away healthcare from anyone."

Warren interrupted that heated exchange between Delaney and Sanders and seemed to calm the room down, defending Medicare for All but also emphasizing that nobody's healthcare would vanish under a government-run system. She also tried to pivot away from disagreements among Democrats about whether to abolish the private healthcare industry—and disparaged the focus on the idea that Medicare for All would mean people "losing" their insurance.

"Jake, your question is a Republican talking point."

Democrats tend to avoid criticizing the media a la the GOP, but Sanders blasted moderator Jake Tapper for asking whether the middle class would have to pay higher taxes under Medicare for All. Warren was repeatedly asked the same question, and avoided it, instead saying that the middle class would benefit more than it pays. (The idea, though she didn't fully spell it out, was that higher taxes would be offset by better benefits.)

"I do know that—I wrote the damn bill."

This line, which Sanders shot at Tim Ryan, who was criticizing Medicare for All, is already on a button.

Even if he fumbled when talking about race—saying, somewhat inexplicably, "As an urban mayor serving a diverse community, the racial divide lives within me"—South Bend Mayor Pete Buttigieg had a good riff about how he was a junior in high school when the shooting at Columbine happened, and how we need to prevent yet another generation from having to experience frequent school shootings.

Midway through the debate, the moderators had politely but firmly cut the candidates off so many times that it had become a mini-meme. No doubt the CNN hosts were just trying to keep to an unwieldy format, but in moments it seemed like they were stopping anyone from actually communicating their ideas, particularly on complex issues like healthcare.

"We need to get back to nuclear proliferation."

While defending the position that the U.S. shouldn't rule out using nuclear weapons in a first strike, Montana Governor Steve Bullock accidentally referred to "nuclear proliferage," and then mistakenly said that "we need to get back to" proliferation, which is… not exactly what anyone wants.

Marianne Williamson, a self-help guru who has been more of a half-ironic meme than a serious candidate, is a unique figure who talks like a West Coast spiritualist rather than a wonk. So maybe she wasn't even consciously making a Seinfeld allusion during a fairly impressive speech about how the political system would be broken beyond repair until campaigns were publicly funded:

"For politicians, including my fellow candidates, who themselves have taken tens of thousands—and in some cases, hundreds of thousands—of dollars from these same corporate donors, to think that they now have the moral authority to say we're going to take them on, I don't think the Democratic Party should be surprised that so many Americans believe yada, yada, yada."

Among the all-white slate of candidates onstage, Williamson had maybe the clearest perspective on racism, drawing attention to racial and economic inequities in a simple way while also highlighting her own privilege:

“I don’t know why anybody goes to all the trouble of running for president of the United States just to talk about what we really can’t do and shouldn't fight for.”

Warren summed up the divide between the progressives and moderates succinctly while delivering what seemed like the night's 100th burn on Delaney. Sanders and Warren represent a wing of the party that wants to dream big. And candidates like Delaney and Bullock sure won't stop them.

Will Shake Up at IAEA Impact Iran?