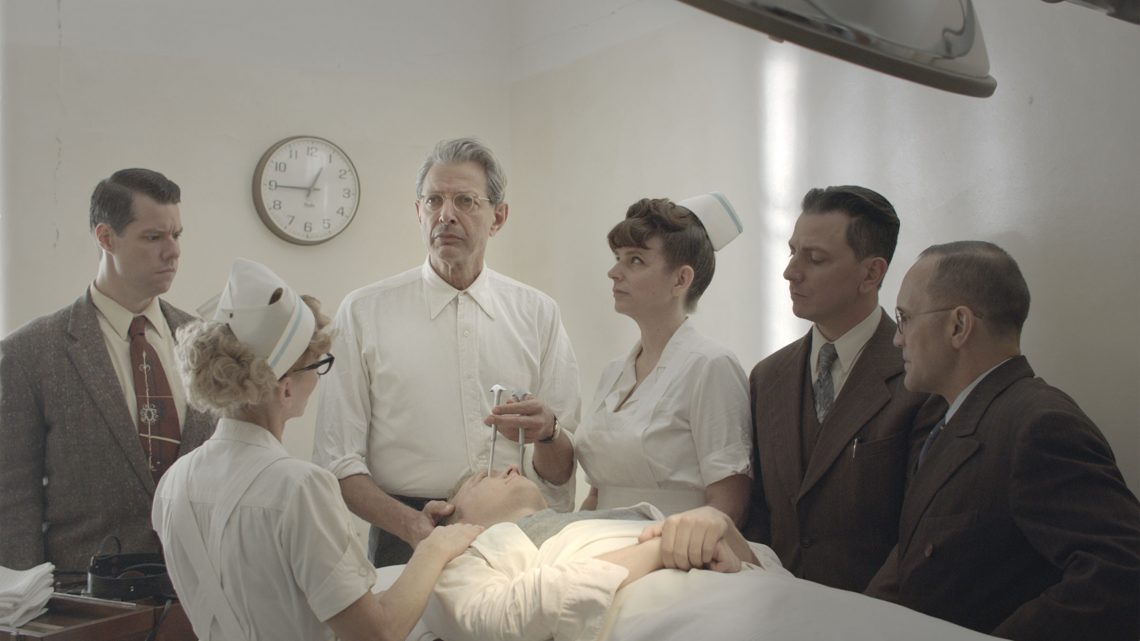 Jeff Goldblum Talks About Doing Drugs as a Teen and, Uhhh, Lobotomies

It's difficult not to like Jeff Goldblum. Whether you're a longtime fan, a thirst trap enthusiast who follows him on Instagram, or you simply know him as "that guy from Jurassic Park," the 66-year-old actor's charisma is a known fact.

His latest film, The Mountain, is a testament to his versatility as an actor. The Rick Alverson-directed drama from VICE Studios finds him in the role of Wallace Fiennes, or "Wally"—a lobotomist traveling the country in an attempt to prove the medical legitimacy of the transorbital lobotomy. The character is loosely based on the real-life Walter Freeman, who pioneered the same controversial procedure and notably performed it on Rosemary Kennedy. Bits and pieces of Goldblum's trademark charm take on a darker, disquieted quality through Fiennes, whose womanizing tendencies are second only to his callousness as a surgeon seeking glory through dubious means. Cast against the anti-utopia of the 1950s and the muted palette Alverson utilizes throughout the film overall, his performance is electrifying and unsettling.

VICE caught up with a Prada-clad Goldblum on his latest trip to New York to learn about his approach to the role, his music career, and more.

This interview has been lightly edited for clarity.

VICE: So we know what a lobotomy is, but we want to hear you explain it step by step. What’s the Jeff Goldblum version of a lobotomy?
Jeff Goldblum: Oh boy, you know, I play one on TV but I’m not really qualified. From what I remember from my research—and I really didn’t take the course, just enough to seem credible—there was a guy in Europe— Moniiiiiz?—who won the Nobel Prize for it, who thought that, as they were mapping the brain and discovering the activity in their primitive way back then: you know, if we separate the one part from the another part, we can disconnect this trouble that happens. Anyway, they did it over there and went in through the skull and did this and that to whatever success they had, and then our guys started doing it—my guy, Walter Freeman, who’s the basis of my character—he had a famous grandfather, and I think he suffered from a kind of narcissistic, sick ambition to outdo his grandfather and plant his flag in some way that wasn’t entirely overshadowed. He was already interested in medicine, and he said, ‘I’m gonna get into that brain thing,’ and you know… I’m gonna bring that over here and do that over here. Nobody’s done it over here before.

And that’s what he did and what he innovated. And then he transitioned, for some reason or another, into being a surgeon, and even though he was not qualified and hadn’t been trained to do it, he said, ‘I’m gonna do it in this sort of outpatient way.’ Fast food style. Assembly line style. What do I have in my kitchen? I have a couple of ice picks or something, and I’ll bet if you go right in through there, I could just get—[mimics stabbing writer in eye with imaginary ice pick]—right in there and start to separate that same thing, and that’s what I’m gonna do. And that’s what he did. Then he started patenting that, and it was called ‘transorbital lobotomy’. And then he patented his own version of the tools, and that’s what he was doing.

Great!
I don’t know how great it was! Early on, he was in Life magazine. And then therapy came in, and drugs came in, and [whistles, as though something were falling] and [the procedure] was debatable anyway. And there was no media like there is now… [mumbles, motions to writer’s laptop] for good or ill. But he could get away with, ‘Well, they haven’t heard of me on the West Coast!’.

Right. Hop in the van…
Hop in the van and start seeing if I can keep selling people on this over there. He was kind of a showman. A snake oil salesman type. And you know, he put on—they cut a scene from the movie where I did exactly what he used to do with the phrase ‘surgery of the soul’. He used to write it out in chalk on a blackboard, using two pieces of chalk with both hands, this one going backwards, this one going forwards—at the same time. Surgery of the soul. Bang! You know, it took me awhile to learn how to do that. We did it, and then they cut it out of the movie. 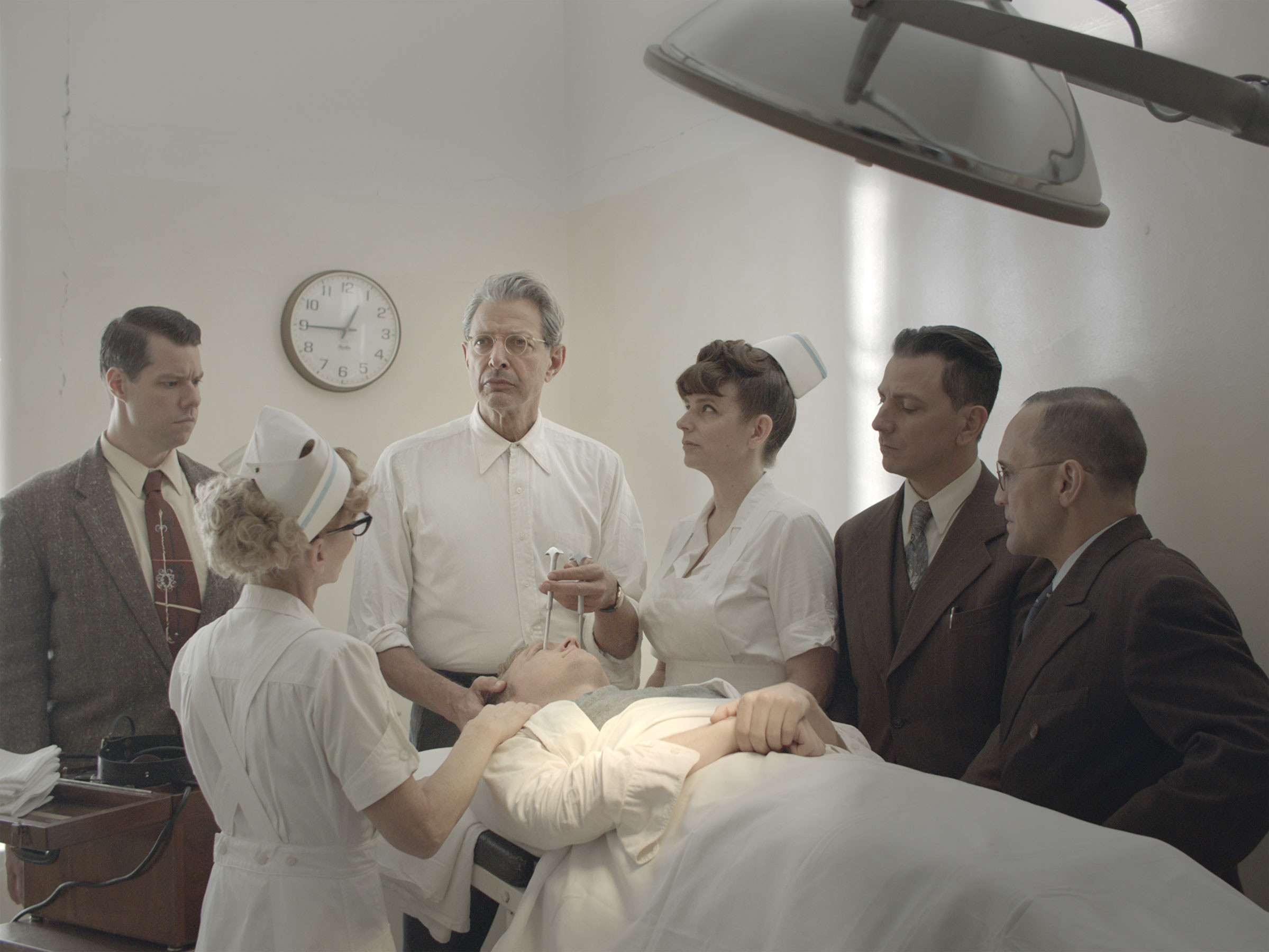 Was your approach to this role different from previous films given the real-life basis of the character?
Well, yes! I’m nothing if not conscientious. There’s a book about him, there’s stuff that he wrote, there’s a documentary about him, there’s footage that he made doing lobotomies, and so we were there watching that again on the day or two that we tried to recreate it. We did it exactly like him. We tried to do it credibly. Rick Alverson and I both got on the phone with a woman whose mother had been lobotomized by Walter Freeman. She had stories and letters and things, and we did all that. But finally it was just a springboard because Rick didn’t make a—thank goodness—kind of conventional biopic. Which for my tastes, would’ve been unsatisfactory and boring, in the way that I’m thinking of it. But he did something that I like very much. 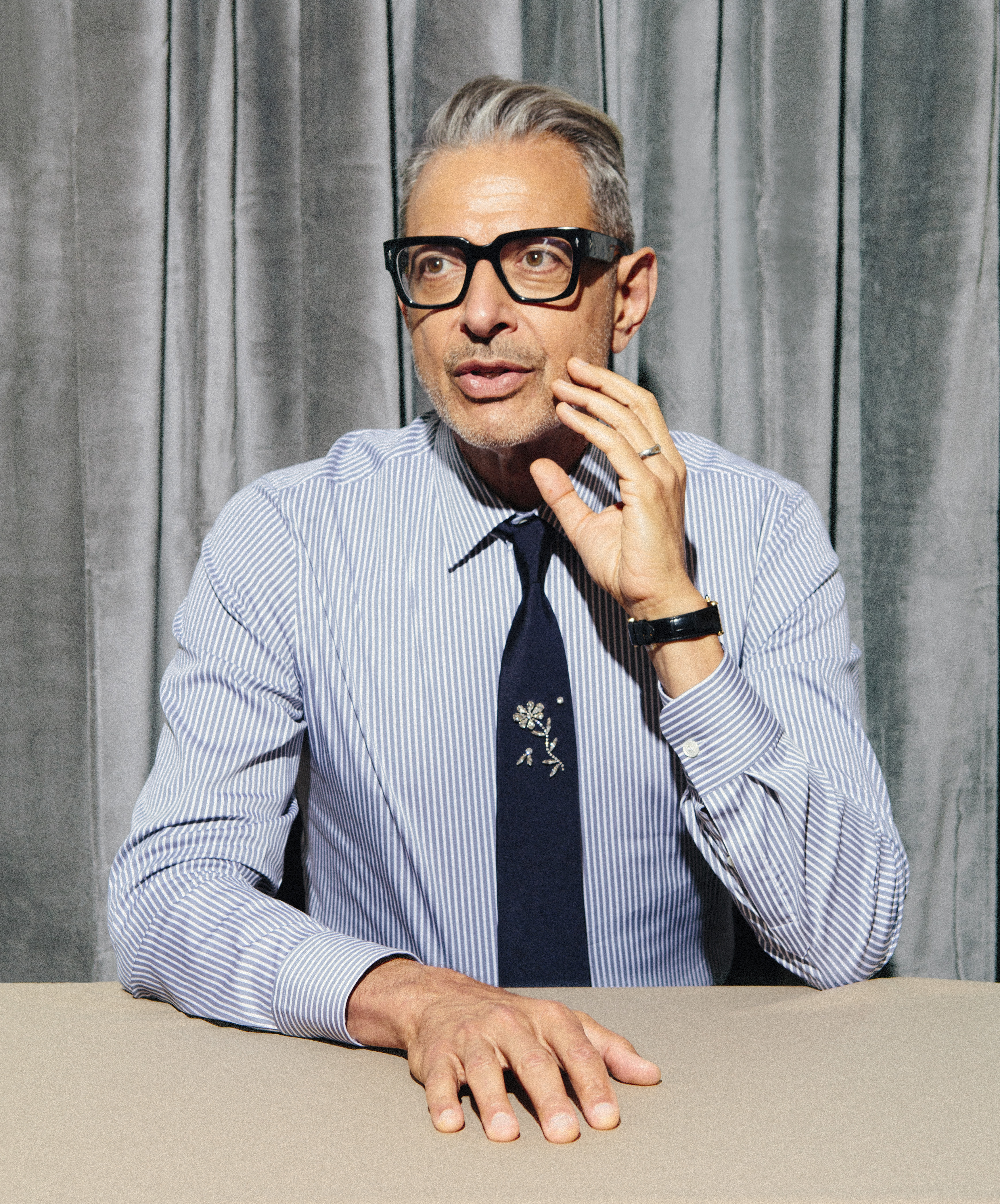 Your character in the film, Wally, is often times a bit disheveled. Was that difficult for you, as a sharp dresser?
No, no, no… I like to play characters. Ah, yes. I didn’t dress like him. But while I was dressing that way, as so often happens, I go, ‘This is my favorite thing to wear!’. I was so into that… I work from the inside out, but also the outside in. Early on, I talked to Rick Alverson; I came to early meetings and script go-throughs with things from my closet that I thought were right for the character. None of which I wound up wearing, and some of which he had very specific ideas about, like, ‘Mmm, that’s ok.’ I even changed a pair of shoes—I took them to the shoemaker and had them changed a different color and distressed because I thought, you know, I’m going to sacrifice this for the cause, uh… thinking Rick would say, ‘yeah, maybe something like that’—but this he had very specific, artful ideas about. He’s a real artist. 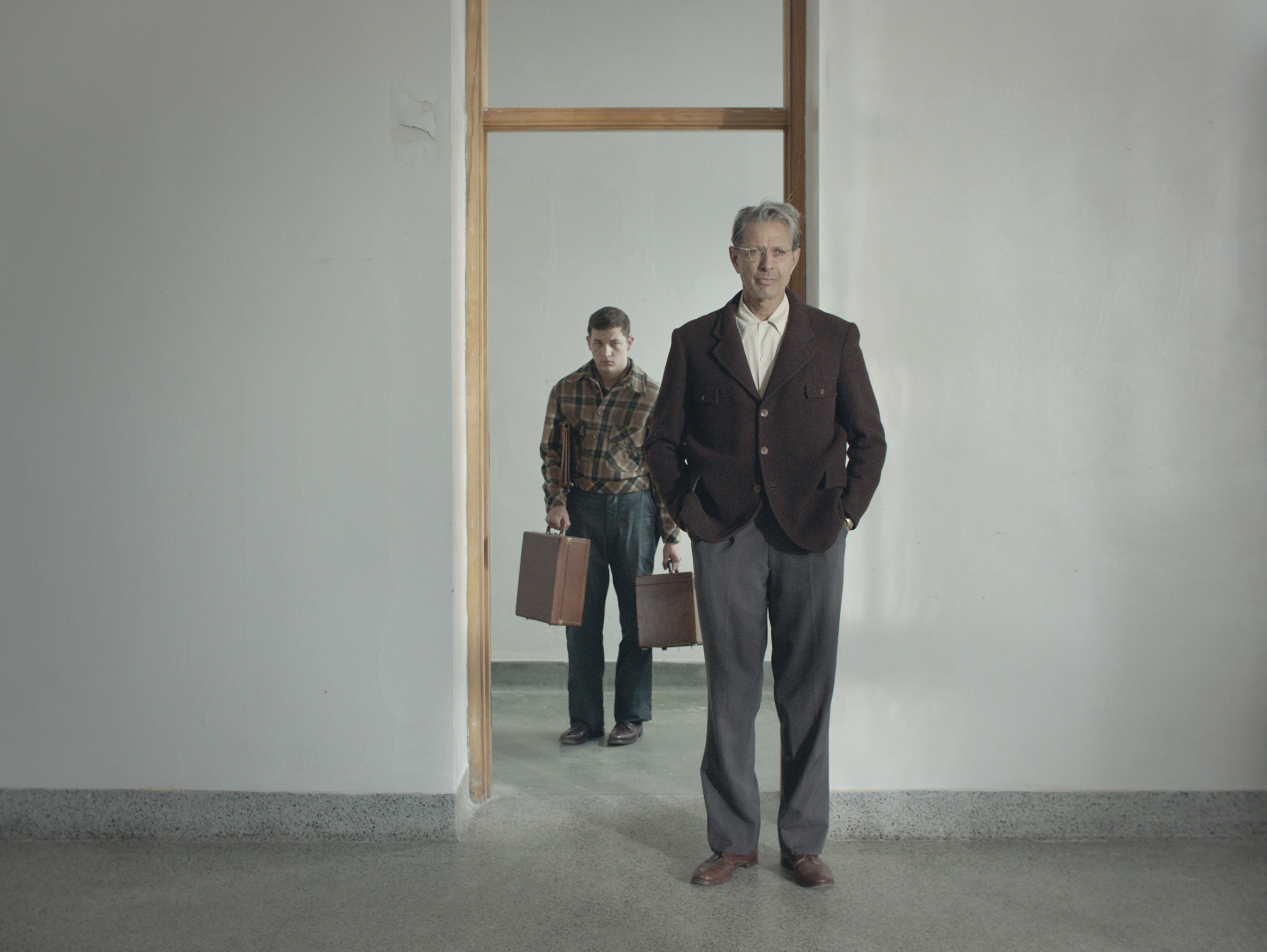 And then, Elizabeth Warn was the fantastic costume designer on the movie who worked with Rick and all his specific ideas, and she was brilliant. She had connections to actual vintage clothing that came from the 1950s and 1945 and clothes that I would’ve had for ten years by 1954 [when the movie is set], and we wore the same one pair of socks the whole movie. These yellowing, faded socks that were just about that long and kind of had no elastic and would fall down to there, and had some little figures on the side. Oh, those were good. The shoes were perfect. I had a bunch of good stuff. I had ten different shirts that I wore. They were all rather similar, but faded differently—as you saw, the palette, the colors of the move—faded, subtly different colors. I liked them.

You’re an accomplished jazz musician. Your first record with the Mildred Snitzer Orchestra dropped last year, and there’s a second one in the works that you recently announced. Can you tell us a little about that?
Very little. But we announced at our appearance at the Glastonbury Festival that Decca was going to be our label for the second album. I know the title, which I think we’ve settled on... but I can’t tell you. I wish I could! The band is Joe Bagg on organ, Kenny Elliott on the drums—once again, the same band as last time—and Alex Frank on the bass, John Storie on the guitar, and James King and Scott Gilman, both playing saxophone; and then we have some guest singers that are really interesting. You’re going to like this next album. This album is going to be really interesting. One guest singer we already have revealed—and we sang the song that she sings on the album at Glastonbury—is Sharon Van Etten. She’s great. She sings this song that we arranged—and mostly Alex Frank arranged, I believe—this version of “Let’s Face the Music and Dance.” It’s a really good recording. And there are a few others like that. It’s coming out in the fall, probably early November or late October.

Follow up question to that: have you ever smoked a jazz cigarette?
My mom kind of had a left-out feeling of youth culture as the kids came into the late 60s, wherein things started to happen. So she not only tried starting to smoke grass herself, but started to grow it in our backyard in Pittsburgh and would give it to us and everything. I didn’t smoke with her much, but I had my brother—who was four years older than I am and had already entered the counterculture, which for me was mysterious, romantic, and exciting—who introduced me to hash. The first thing I ever smoked was hash and a pipe. He was going to college and had this funky apartment, and I went over. He put on The Beatles—I think Sgt. Pepper or Mystery Tour or The White Album or maybe all of them—and we smoked the stuff. It was just fantastic.

Then I moved to New York at 17, and my first year at the Neighborhood Playhouse was spent studying excitedly, but I would experiment by smoking grass here and there. But then that summer, the first time I got a professional job in the theatre at Shakespeare in the Park, I took mescaline three times with people from the Playhouse. I know you didn’t ask about this, but mescaline three times. That same year I took acid, and it was the last time I did anything like that. But I had interesting trips all of those times.

And that was about it. Never did cocaine, ecstasy, or mushrooms. Since then, I just experimented with drinking as a kind of freedom enhancer here and there, but it quickly ran out of steam. In my life and in my work, I’ve gone straight as an arrow. I used to drink coffee in the last decade or two to kinda, you know, get ready for a thing like this even. But about five years ago, I gave that up entirely and religiously don’t have any caffeine or anything. All my steam you see now is from my own imagination and my own having gotten a night’s sleep. I like to have a nice night’s sleep and a nice breakfast. And then I figure out how to put some attention on the challenge and opportunity at hand and see if I can solve it that way. I don’t do it with any enhancement.

A Definitive Guide to Getting Into Strap-Ons