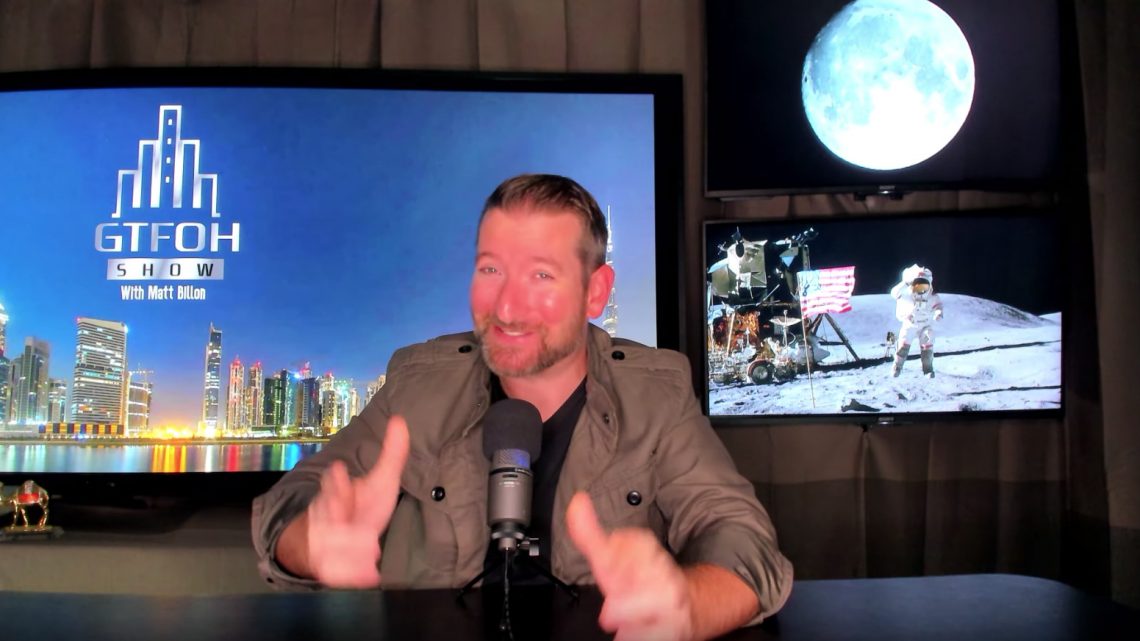 Conspiracy Theorists Are Going Wild Over the Moon Landing Anniversary

“Happy anniversary everybody,” YouTube host Matt Billon says into the camera. “Fifty years ago, they faked going to the moon. It’s an amazing accomplishment.”

“I hope they’re celebrating with something big...” he says while trailing off to think of a killer joke. “... like fake going back or maybe one of those commemorative fake gold coins.”

The video is entitled “Moon Landing, 50th Anniversary of the Biggest Lie Ever Told?” and since its upload four days ago it’s been viewed about 10,000 times. It’s just one of many videos, blog posts, Facebook posts, or forum threads created by conspiracy theorists commemorating the Apollo 11 moon landing with a heaping dose of ire. Now, while there are think pieces aplenty about the conspiracy—how it started, why people believe it, and countless debunking articles—few look into what conspiracy theorists are doing to mark this monumental occasion.

So let’s do that, shall we? Take my hand, fair reader, we’re going deep into the heart of the conspiracy fever swamp. Since social media has broken our brains in such fun and particular ways, I’ll organize our tour via those channels. (I’m not going to 4chan or 8chan because, and hear me out here, those places are even worse than the Cats trailer).

As we all know, YouTube is one of the hotbeds for conspiracies on the internet. You can’t whip a rock on that platform without hitting some dude spouting off about white genocide or another random talking about freemasonry. So is there some content from conspiracy theorists angrily marking the 50th anniversary of Apollo 11? Of course, there is! 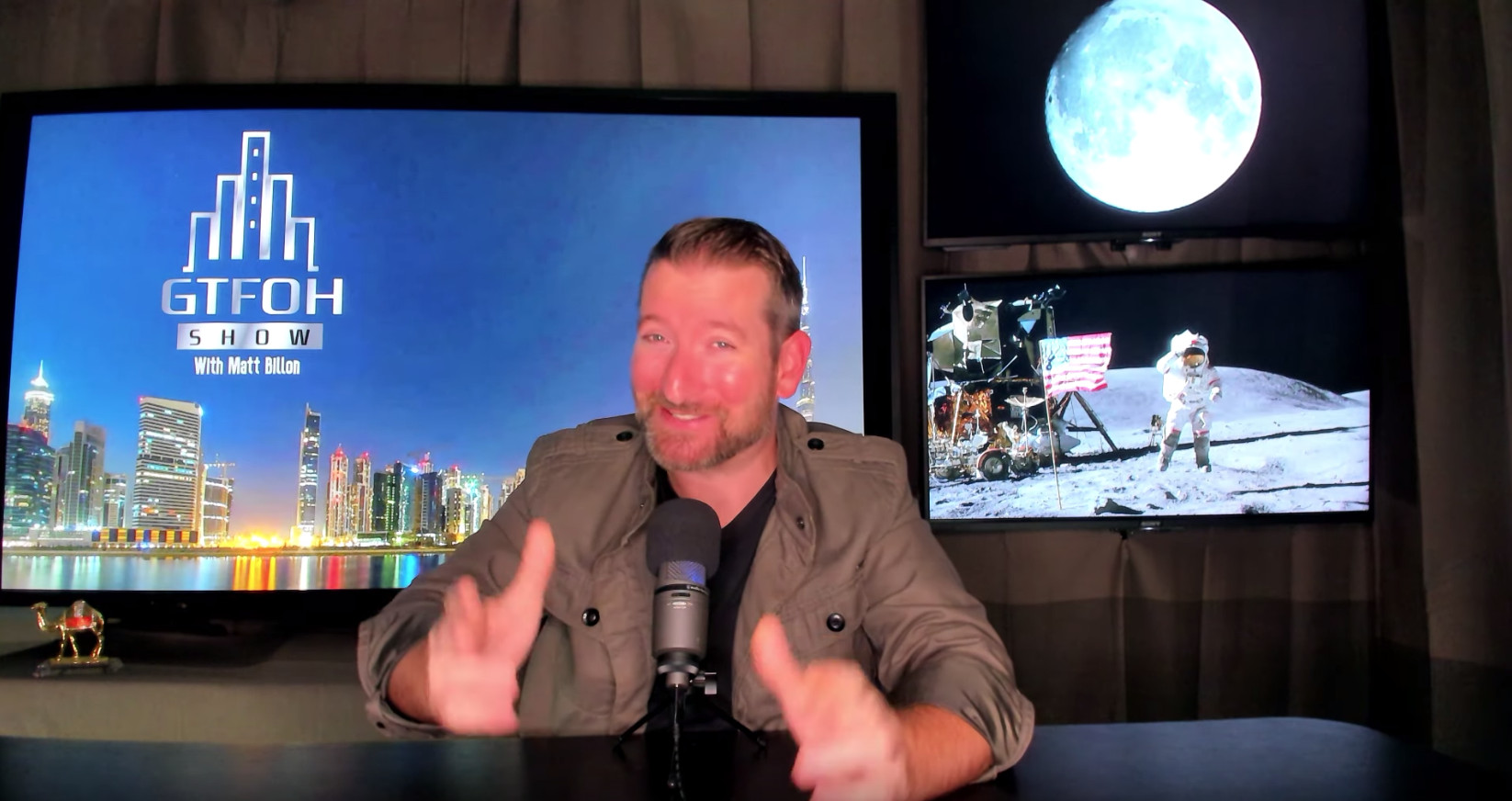 There is, as mentioned above, our friend Matt Billon who dedicated a show to the anniversary. Billon operates in the way most of us would think a YouTube comedian/conspiracy theorist would: sitting at a desk in a DIY home studio, scoffing at the camera. Billon’s video is about half an hour long and most of it is him watching other moon hoax videos.

Numerous videos by far-right “comedian” and general brain worm sufferer Owen Benjamin about his moon hoax beliefs are being recirculated and re-uploaded on the platform. One of these re-uploads, entitled “Happy Fake Moon Landing Anniversary,” features a nice little section where Benjamin states space suits are made to look like the ritualistic garb the Pope wears. It’s been seen around 10,000 times and embedded into other conspiracy videos.

The same sort of re-uploads are happening with YouTube’s favorite boy, Joe Rogan, who famously didn't believe in the moon landing for a while (something he has since reversed his position on). Because it’s YouTube these anti-moon landing Rogan clips are titled “Joe Rogan SHREDS NASA Employee in a CBS Interview on MOON Landing Hoax” and the like.

Other conspiracy theorists have made reaction videos to a Google Doodle marking the anniversary. One YouTuber named Barnabas Nagy proceeded to point out examples of some sort of occult activity and numerology in the video. “Let's celebrate 50 years of bullshit,” Nagy starts off his reaction video with. When the little doodle shuttle has three parachutes pop out he says, “three, we know the symbolism there, right?” 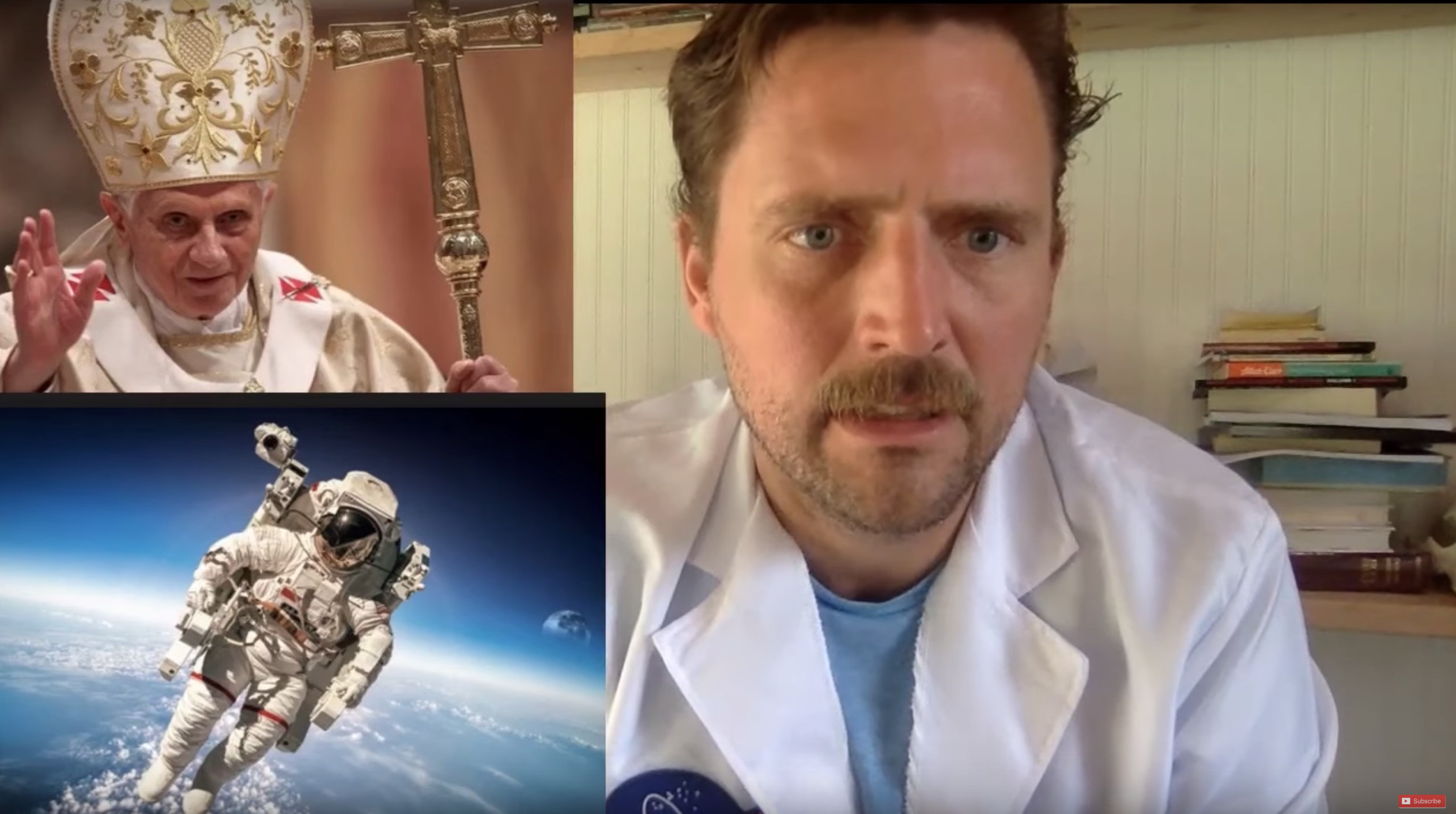 Owen Benjamin showing his audience the similarities between the Pope and astronauts. Photo via YouTube screenshot.

There are of course numerous videos and threads discussing and breaking down the theory that Kubrick filmed the moon landing and hid clues in his films—something the documentary Room 237 did brilliantly.

Frankly this is YouTube, there is just too much here. We must move on.

One of the best things to be found on the conspiracy subreddit is called: “In the 1960s NASA created an explosion on the moon equivalent to 11 tons of TNT. The moon vibrated and rang like a gong for over 3 hours. Metal samples tested showed synthetic elements. Each crater measured the exact same depth regardless of size. Is the moon an artificial surveillance satellite?” It links to a website that’s called downthechupacabrahole.com which I have to admit is a great name for a conspiracy blog. (Side note: the moon did shake and the reason is something dubbed moonquakes, it’s super interesting. Read about them here.) 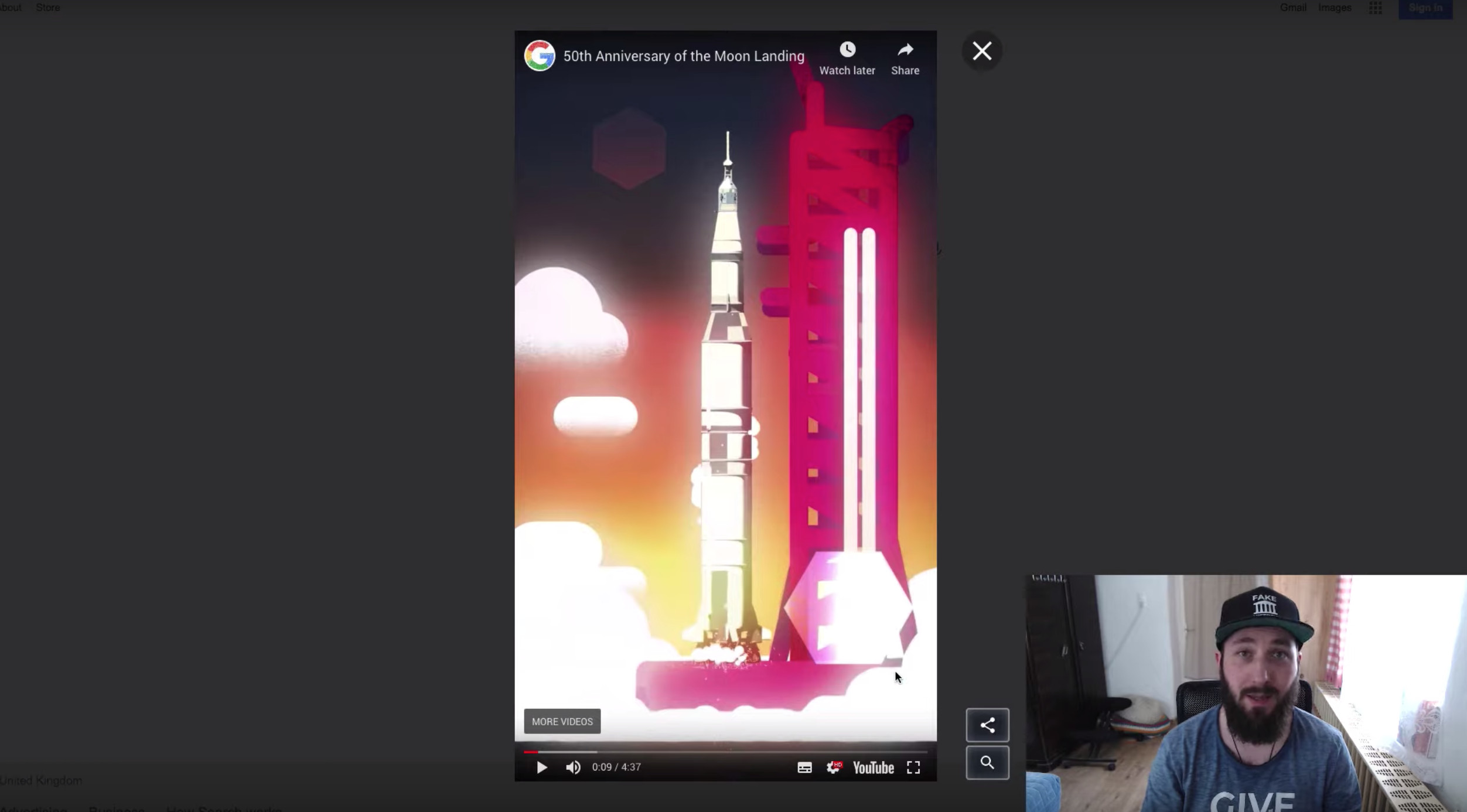 A reaction video a conspiracy theorist made to the Google Doodle. Photo via YouTube screenshot.

In a nice meta twist, one of the most recent posts on the conspiracy subreddit is about how there aren’t enough posts in the subreddit about the moon landing. “No one wants to talk about the elephant in the room today....” the user wrote.

Over in the dedicated subreddit for the hoax there, surprisingly, isn’t much talk about the anniversary. It’s just the same ol’ steady stream of YouTube videos focusing on debunking the landing. I suppose if every day is a day to debunk the moon landing the 50th anniversary is kinda meaningless.

As one would expect (since Facebook is now just the stomping ground of racist and conspiracy-minded aunts and uncles everywhere) there are quite a few moon landing hoax pages. And because this is Facebook, there are a few of these pages which are racist like “The Moon Hoax was a Zionist agenda” who have (thankfully) not posted in a while.

Inside The Apollo Moon Hoax Facebook page, however, there was a buzz of activity today. Members posted YouTube videos, blog posts, and what have you all to, seemingly, impress their fellow conspiracy theorists. Within some of these groups, the theme of numerology comes up again. One commenter, writing on a story about the Google Doodle for Apollo 11 (this really set some of them off) said, “Apollo 11 x 3 ‘spacemen’=33” to which another user responds with “ holy shit that’s scary.”

These groups have the most activity of any place but since they’re located inside groups you have to search for they’re quarantined so that’s nice.

Like any good influencers, some of them are attempting to get some engagement going with their audience tweeting out calls like, “Comment your favorite proof that the moon landings were faked!! Use pictures or even links!” or posting polls about whether or not it was a hoax.

Now, at the tail end of our excursion into the void, let us take a jaunt to the past and head over to Godless Productions. For those of you not in the know, Godlike Productions is one of the older conspiracy forums on the web and is still able to boast a sizable fanbase. Now, believe me when I say this forum did not miss the notice of the anniversary. At the time of writing, there have been 10 posts in the forum regarding the anniversary today alone. The biggest one is kind of boring and focuses on proving the new photos released by NASA have been photoshopped. However, the best one, BY FAR, is about the fact Duran Duran played a show in honor of the anniversary.

“I spammed the lead singer's daughter to tell all of them that it was faked. They didn't respond yet," wrote the poster. "Will continue spamming."

A collection of the posts on Godlike Productions focusing on the moon landing. Photo via Screenshot.

Now this man spamming like the wolf brings us to the end of our little trip down conspiracy lane. Thank you, my fair reader, for taking a little tour with me into the fever swamps of the internet. I hope we all learned something on our field trip. For your dedication I believe I owe you a palate cleanser so, just special for you, here is a video of Buzz Aldrin popping a pushy moon hoaxer in the mouth.

“Heading for Stagflation” says Peter Schiff: I Challenge Schiff to a Debate