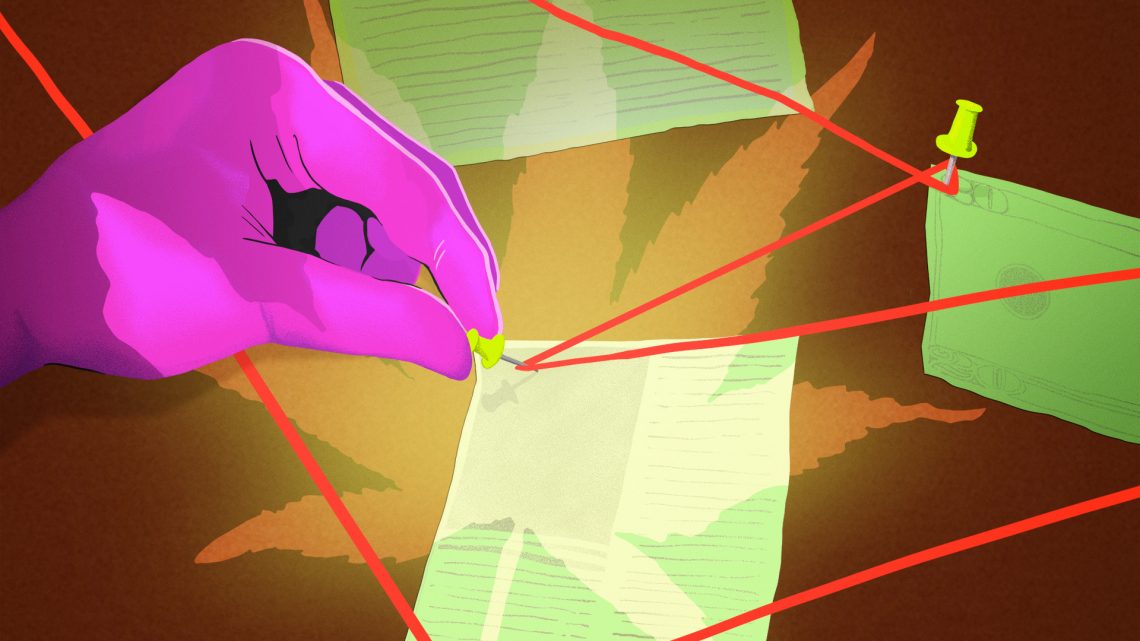 How a Bogus Anti-Weed Stat Seeped into the Mainstream

Not long before New York abandoned plans to legalize recreational cannabis last month, the New York Post published an alarmist op-ed that made an unusually bold claim about pot.

Contrary to promises about a legit industry's bounty of jobs and tax revenue, over-the-counter weed is not only hazardous to the health of young people and the mentally unstable, the column argued, it's bad economics.

"In fact, taxpayers and communities have had to shoulder an estimated $4.50 in social costs for every $1 in revenue, according to researchers at the Centennial Institute,” wrote Kevin Sabet, a social scientist who worked in the Office of National Drug Control Policy (ONDCP) under President Barack Obama and now heads up Smart Approaches to Marijuana (SAM), arguably the country's most prominent anti-legalization group. Those social costs, he suggested, come in the form of healthcare needs, lost productivity, and other consequences like weed DUIs.

The June 13 piece wasn’t the first time the $4.50 stat popped up in an anti-weed screed. A month before, Sabet used the "whopping $4.50 in societal costs" line in a similar anti-legalization op-ed published in the Chicago Sun Times. It didn't work—the Illinois state legislature passed a bipartisan recreational cannabis legalization bill on May 31, fulfilling a campaign promise made by first-year Gov. J.B. Pritzker, who signed it into law last week. Nonetheless, the "$4.50" figure, which originated in a November 2018 report titled "Economic and Social Costs of Legalized Marijuana," from an obscure right-wing think-tank, has firmly entered the discourse.

The stat has been cited in an official report released by the ONDCP, which manages "High-Intensity Drug Trafficking Areas," or HIDTAs, a collection of multi-jurisdictional law-enforcement efforts mandated by Congress to oppose legalization. (Last year, as BuzzFeed News reported, ONDCP helped solicit other federal agencies for "facts about the negative impacts of marijuana.") The $4.50 figure has also been tweeted by the United States Attorney for Oklahoma, the kind of federal law enforcement official advocates have long feared might hamper the state-by-state march toward marijuana-policy reform. At the local level, a mayor on the Jersey shore, a county health department in Illinois, and a member of the commission formed in New Hampshire to study legalization have all repeated the figure as if it were truth.

Thing is, it's almost certainly not true. While legalization's costs are under-studied—just as understandings of cannabis' value as a medicine and risk as an intoxicant suffer from a dearth of knowledge—the report ignores the cost of criminalization. And, as Reason pointed out shortly after its initial publication, it uses "laughably bad" back-of-a-cocktail-napkin methodology to reach some of its conclusions.

This makes it just part of a broader wave of intellectually couched but factually dubious pushback against the liberalization of pot laws. Even when they do not play a prominent role in policy debates, reports like this one provide ammunition for law enforcement officials and politicians bent on waging a furious rear-guard defense of the War on Drugs, experts and advocates said.

Early this year, former New York Times reporter Alex Berenson helped kickstart a new fit of pot skepticism when he published a buzzy tome called Tell Your Children, consciously referring to Reefer Madness-style anti-weed panics of the past to make the case that the drug has major, under-appreciated health risks and social implications. Meanwhile, public-health centered cautionary tales, in the form of warnings from medical experts and doubts from school officials and other youth advocates, are appearing in mainstream outlets like the Washington Post and New York Times.

But while Berenson's book was widely criticized for its questionable use of social science and research data, Tell Your Children and some of the other research cited by legalization opponents had at least the veneer of journalism or scholarship. The $4.50 study published by the Centennial Institute—a think-tank at Colorado Christian University—was worse than that.

It was published on the university's website, not in an academic journal. A for-hire, family-run research firm called QREM was "commissioned… to create the report," according to an introductory letter from Jeff Hunt, a former staffer for Rick Santorum and a staunch Trump supporter who serves as Colorado Christian's vice-president of public policy—as well as the Centennial Institute's director. Hunt appeared to be the only person remotely connected to academia who was involved in the study.

An avowed anti-legalization activist who led an unsuccessful effort to end Denver’s annual 4/20 rally, Hunt recently appeared on Fox News to rail about the dangers of marijuana to young people. Successful as a pundit and agitator, Hunt does not appear to have academic credentials, either as a social scientist or data researcher. According to his LinkedIn, he has degrees in divinity and political management and worked in conservative politics and media before joining CCU in November 2015.

Reached via email for comment, Hunt did not immediately respond to questions regarding his methods or the existence of report co-authors, if any. He did say that the only critiques of the work he'd seen have been "from the pot industry."

"So far, we have not been presented a reasonable critique with an alternative number regarding the costs associated with legalized marijuana," he said. "The marijuana industry loves to tout the tax revenue gained as a result of commercialized marijuana but won't provide a single figure regarding the cost to society." Didi Fahey, a PhD in social science and president of QREM, the consulting firm involved with the study, did not respond to a request for comment.

But prominent drug-policy experts contacted for this story were profoundly skeptical of the study. Mark Kleiman, a professor at NYU who has worked as a consultant with Washington state on the mechanics of legalization—and believes the social costs of cannabis tend to be underestimated—argued the Centennial research did not account for the cost of weed criminalization. (Nor did it guess at increased earnings now that low-level drug offenses are reduced as barriers to education or employment.) Likewise, Kleiman added, it did not fully consider cannabis in the context of excess use of other substances, such as alcohol—which has its own costs to society that likely far exceed what it nets the public in taxes.

"Guesswork + bias + arithmetic," Kleiman said in an email by way of appraisal of the Centennial report, adding that it was not a workable "benefit-cost analysis."

The study uses Colorado, one of the first legal weed states, as its lone test case. The state netted $247,368,473 in cannabis sales-tax revenue in 2017, according to official figures, part of a revenue stream that's gone to pave streets, fund education, and—in at least one instance—build a new police station. But according to the Centennial Institute report, legalization actually cost the state four-and-a-half times that—more than $1 billion—thanks chiefly to $431,027,862 in lost productivity and $469,488,127 in health costs.

To reach those figures, researchers pulled data from official sources, like the Colorado Department of Public Health and Environment, and then did some math. Among other novel moves, to figure cannabis' cost to productivity, an estimated number of marijuana-related expulsions and dropouts—itself dubious, reliant on multiplying total dropouts by a portion "likely" attributable to pot—was multiplied by $334,716.12, the estimated "cost of not having a high-school diploma." (Pot users who went back to school didn't seem to figure.)

To posit health costs, the study claimed more than 30,000 weed-related hospital admissions per year in Colorado—a figure based on a separate, peer-reviewed report, which reached a decidedly less panicked conclusion—and also cited addiction treatment, underweight babies, and other maladies as adding to a ghastly tab.

When reached for comment on questions about one of his favorite talking points, SAM's Sabet had nothing but warm words for the study as a good "starting point." He did not address the critiques offered by Kleiman and other experts, who were less than convinced by the report.

"That's one big logical fallacy," he added. "The other is that all marijuana use is attributable to legalization. 'Legalization causes marijuana use, marijuana use caused the harm.' Those are two gigantic logical leaps that the report does not very carefully dis-aggregate."

What the report does do, however, is say exactly what anti-legalization advocates want it to say: Cannabis legalization is expensive and bad and you shouldn't do it. Kamin likened the report's value to the old saw about the drunk woozily hanging onto a lamppost: "It's there for support, not for illumination," he said.

It is true that tax revenue figures in California, where legal sales began January 1, 2018, have so far come well under early rosy projections. At the same time, CCU's findings of a staggering, 4.5-to-1 "societal cost" appeared to stand alone in public research. Analysts at the RAND Corporation, for example, which has been studying marijuana policy for well over a decade, have not come to similar conclusions, focusing instead on market dynamics and plummeting retail prices as problems to be addressed by lawmakers and regulators.

In New York, the study and columnists who touted it were almost certainly not decisive in dooming the latest attempt at legalization, according to advocates involved in the effort. After all, the foiled debate—like that in New Jersey—was dominated largely by concerns over how racial justice might be achieved in the legalization process, not necessarily harm to society at large.

But dubious bits of research may be anti-drug warriors' best lifeline in an era of fake news and questionable data points.

"These guys are the flat-earth crew," said Michael Collins, a Washington DC-based lobbyist with the Drug Policy Alliance, one of the country's main legalization advocacy groups. "They’re arguing about something that's already been decided."