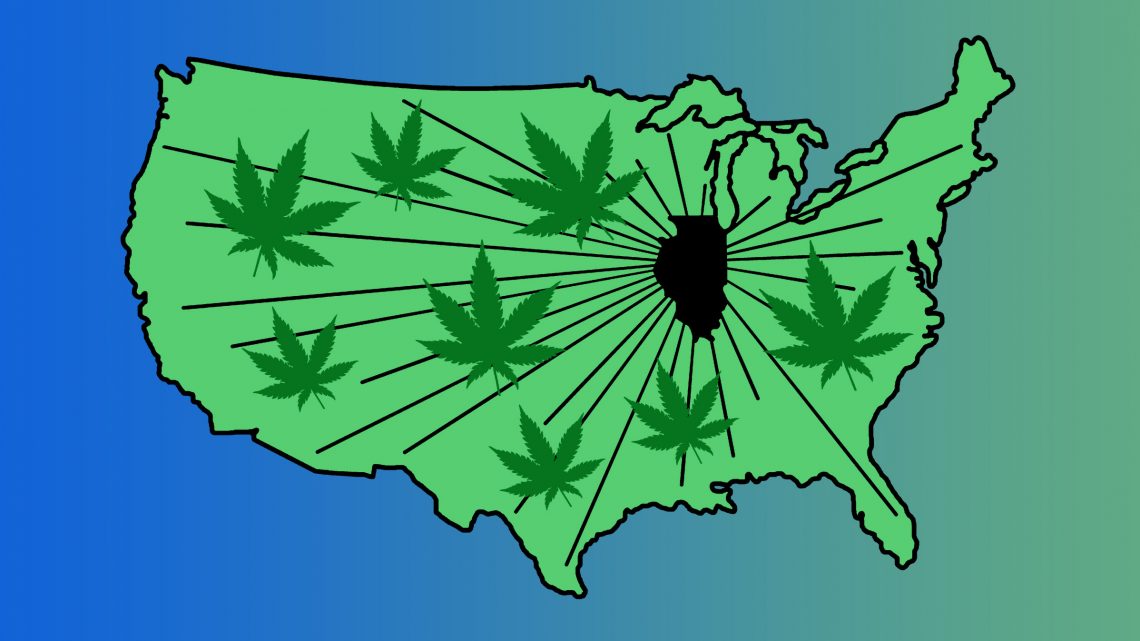 The Midwest Is About to Have a Weed Revolution

Cup your hand and tuck that lighter inside your palm: Legal weed is coming to the Windy City.

On Tuesday, Governor J.B. Pritzker made good on one of his signature campaign promises and signed a bill bringing recreational weed to Illinois. Like recent—failed—attempts at legalization in progressive states like New Jersey and New York, the bill was framed as a "reset" of the war on drugs. Among other provisions, it was slated to expunge the records of as many as 800,000 people who have been convicted for purchasing or possessing up to 30 grams of cannabis. It also vowed to pump 25 percent of the tax revenue reaped from commercial sales into historically impoverished neighborhoods, and attempted to systematically encourage minority ownership of licensed pot dispensaries.

What can people in Illinois look forward to?

Under the new regime—the law was set to take effect on January 1—if you're a resident, you will be able to buy up to 30 grams of weed. If you're not, you can only have half of that (up to 15 grams), and you'll theoretically have to smoke or eat it all before you skip town.

With the bill's passage, Illinois became the 10th state (along with D.C.) to legalize recreational weed, and only the second to do so by way of legislation, instead of popular referendum. More importantly, the law amounted to what experts and advocates described as the most progressive and carefully structured attempt at legalization to date—one that could have ripple effects on drug markets and addiction treatment throughout the Midwest.

"With the governor signing this yesterday, now more than 25 percent of the US population lives in states that have passed laws to remove the prohibition and allow for retail sales of marijuana to adults," said Beau Kilmer, co-director of the RAND Drug Policy Research Center.

What does this mean for the rest of the Midwest?

The emphasis on social equity and justice in the bill is notable, of course—it was fights over those very issues that helped derail erstwhile campaigns on the East Coast. But Illinois also holds another unique distinction: Of all the states to legalize pot, it physically borders the most states (six), some of which—in contrast to, say, Utah near Colorado or Idaho near Washington State—are major population centers. They include Michigan, which legalized cannabis in December, as well as a diverse array of other neighbors: Wisconsin, Indiana, Kentucky, Missouri, and Iowa. While "cannabis tourism" continues to grow—according to Forbes, from 2014 to 2018, it increased by 51 percent in Colorado alone—Illinois was primed to become a sort of economic and cultural beacon of weed, despite the risk of the state quickly running out of the stuff. (And even if you're not supposed to show up just to bring some home.)

"Consider examples you might know of, such as a family from New York State who drives south for vacation and brings back fireworks for their neighbors, not just themselves," said John Caulkins, a professor of operations research and public policy at Carnegie Mellon. "Same thing can happen with tobacco when tobacco from lower-tax states crosses into states with higher taxes." And the same thing can—and probably will—happen with weed.

Like the regional political effect that appears to have emerged on the East Coast in recent years (starting in New England in 2016), experts and advocates suggested it was only a matter of time before nearby politicians grew jealous of the financial boost Illinois was likely to receive from commercial sales. Marijuana Business Daily estimated an over $2 billion market in the state.

"This is the biggest domino yet to fall," said Jim Higdon, a Louisville, Kentucky–based hemp entrepreneur, and the author of Cornbread Mafia. "This puts legal retail marijuana within driving distance of vast swaths of the Midwest and Upper South. States like Kentucky, Indiana, and Tennessee are about to lose millions in tax revenue to Illinois border-town dispensaries."

So are weed tourists going to flock to the area?

Of course, Illinois' neighboring states are much more conservative than those that have been tripping over one another to legalize on the East Coast. But legal pot there wasn't just a question of embracing drug culture or normalizing pot use in a sometimes socially conservative part of the country. Robert Bruno, a professor of labor and employment relations at the University of Illinois Urbana-Champaign, and Frank Manzo, the policy director of the Illinois Economic Policy Institute, who co-authored a report on "the financial impact of legalizing marijuna in Illinois," said that although they expected vacationers to indulge, they did not foresee as great a number as in, say, Colorado. (Those visiting pot businesses amounted to an estimated 8-12 percent of tourists in Colorado in the first years after legalization.)

What both scholars emphasized, and what they both hoped to soon quantify further, was how pot legalization might greatly affect people addicted to opioids who live in states close by—even as some recent research pointed to limits in pot's capacity to assuage the ongoing epidemic.

"With the Midwest unfortunately being [one of the] epicenters of the opioid crisis, and with workers in the most physically demanding occupations, like construction, suffering most, we get the sense that there might be an uptick in visitors from neighboring states to come into Illinois to buy cannabis, specifically to combat their pain in a much safer way," said Manzo. "Wisconsin, Indiana, and Kentucky—three large bordering states—do not even have medical marijuana programs."

There may, then, be an influx of tourists who swing by as a matter of personal necessity—and not simply for a buzzed afternoon.

"As with everything related to cannabis," Caulkins said, "only time will tell."