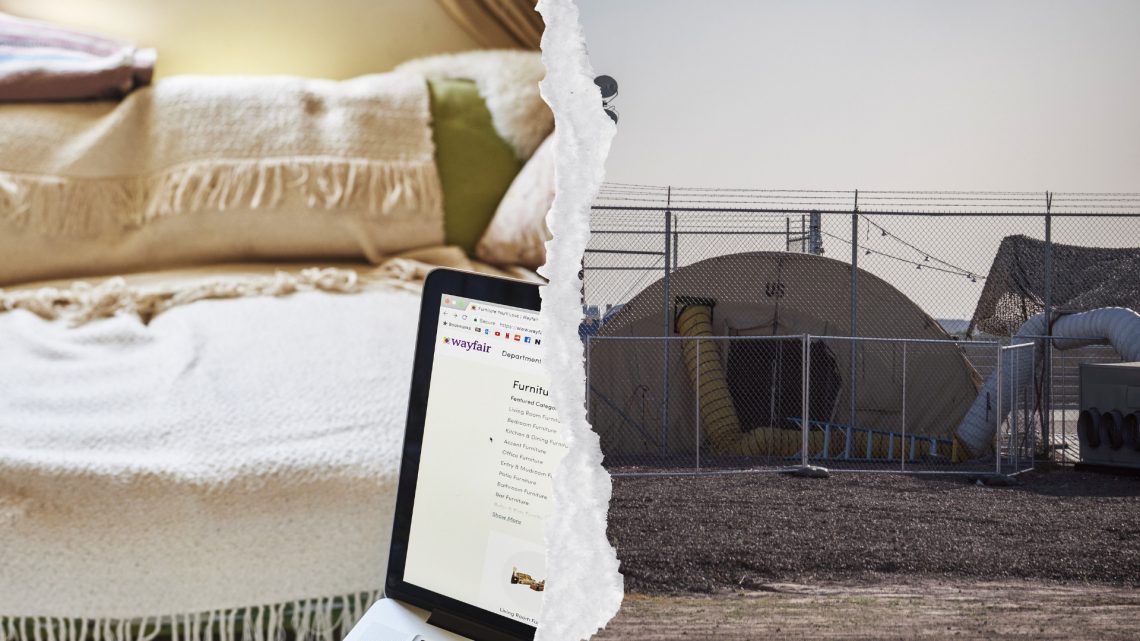 Wayfair Is Profiting from Immigration Detention, So I’m Walking Out

On Tuesday, employees of an e-commerce brand emerged as unlikely activists in the fight over the fate of migrant children at America's southern border. Workers at Wayfair, mostly known for patio furniture and sofas, went public with plans to stage a walkout over the company's insistence on selling furniture to a contractor, BCFS, that runs some Customs and Border Protection (CBP) immigrant detention facilities. Lawyers and other advocates have in recent days reported facilities like these to be increasingly dirty, dangerous, disease-ridden, and generally inhumane. According to a letter claiming more than 500 signatories sent to company brass by employees on Friday, Wayfair beds and other furniture were slated to be provided to a new shelter in Carrizo Springs, Texas, "that will be outfitted to detain up to 3,000 migrant children seeking legal asylum."

As previously reported by the Washington Post, management responded Monday, suggesting they would proceed with the sales—estimated to be worth $200,000—as planned. Ahead of what two workers described as plans by hundreds of people to walk out at 1:30 PM on Wednesday, VICE caught up with an employee involved in that organizing effort to learn what it's like to find out your seemingly innocuous workplace might be connected to a humanitarian nightmare. The employee requested anonymity for fear of retaliation at their workplace.

Wayfair has a pretty transparent business practice, which is to say any one of us has access to any sale that comes through. What happened in this situation was that a member of our team who was close to the sale recognized the vendor, or recognized the person we were selling to—BCFS—and surfaced that information to a group of about two dozen of us. I work on the engineering team, but this team was from all parts of the company, entirely grassroots. Some of us have previous backgrounds in organizing, but all the organization we've done is boots on the ground at Wayfair.

We decided to take action and make sure that our leadership team understood that we were selling to a contractor actively involved in humanitarian violations at our southern border.

We found all this out last Wednesday, and then there was some chatter—concern and frustration. On Thursday, that group of us gathered just to sort of say, "What are our asks? What does this look like? What are we asking for?" And we narrowed that down to two clear asks on our part, which are in the letter floating around: We wanted Wayfair to cease all current business with BCFS and all contractors engaged with these camps at the border, and we wanted to establish a code of ethics, something that our employees could look at and say, "This helps me understand who we do and don't do business with."

In Boston, our office has roughly 7,000 people. So we had a small group that created this document that we circulated, and then, in about four hours, on Friday, we had garnered 500-plus signatories. We felt that, with the timing of it all and the need for action, it was a good representation of the general frustration. We sent that document to leadership on Friday, and got our reply on Monday.

We do thousands and thousands of sales every day. You could go down a pretty quick wormhole over who and who not to sell to, so we are trying to think about it as an opportunity for change, instead of a continued deep dive to who we might have been selling to in the past.

One thing that we're continuing to double down on is that this is not a censure of Wayfair as business; this is us saying to our colleagues and our leaders that we want to work at a place that we feel reflects the ethics and values of our colleagues every day. And we are asking them to be more judicious in who we do business with. I'm happy to say that that conversation continues, and at no point have we felt that we're at risk for a litigious response. But certainly we're aware that a walkout is not what they want, though we feel confident and comfortable that we can continue to do that.

We did gather kind of informally today, and again pressed on those questions and got very similar answers. One thing that was addressed was whether or not we would use the profits from the sale to donate to humanitarian aid at the border. I think that conversation, too, will continue, and remains pretty open. But as far as any change from the letter [from leadership] that also circulated online today, Wayfair continues to state their commitment to doing business legally in states and municipalities where they can.

If Wayfair wasn't a great place to work, though, I wouldn't be saying what I'm saying; I wouldn't feel energized or encouraged to surface this sort of stuff to leadership. I think an important part of all the conversations I've had today is clarifying that this came about not just because we were upset about it, but because Wayfair is a place where this conversation can and should be had.

Quite frankly, none of us feel as if this is political. Our action here comes from a moral and ethical obligation. We're trying not to frame this as left or right, or who did you vote for, but that we live in a point of history where small decisions can make a big impact. So why wouldn't we step up when we can?

We're meeting tomorrow in Copley Square at 1:30 PM, which is adjacent to our offices. Right now, we're targeting around 500 folks to join us, hopefully more, and continue to press for action. It's, again, not about disparaging Wayfair, but calling attention to what's going on at our southern border, and the steps we can take to change that I think are a lot more tangible than people realize.

Our leadership team knows this is happening tomorrow, and they made it clear that there won't be any retaliation. It's helping them understand, too, that this is not just a pet project of ours; rather, it's something we feel really strongly about, and want to change.

They'll be able to literally see us out the window.

This account has been lightly edited for length and clarity. Molly Taft contributed reporting to this story.