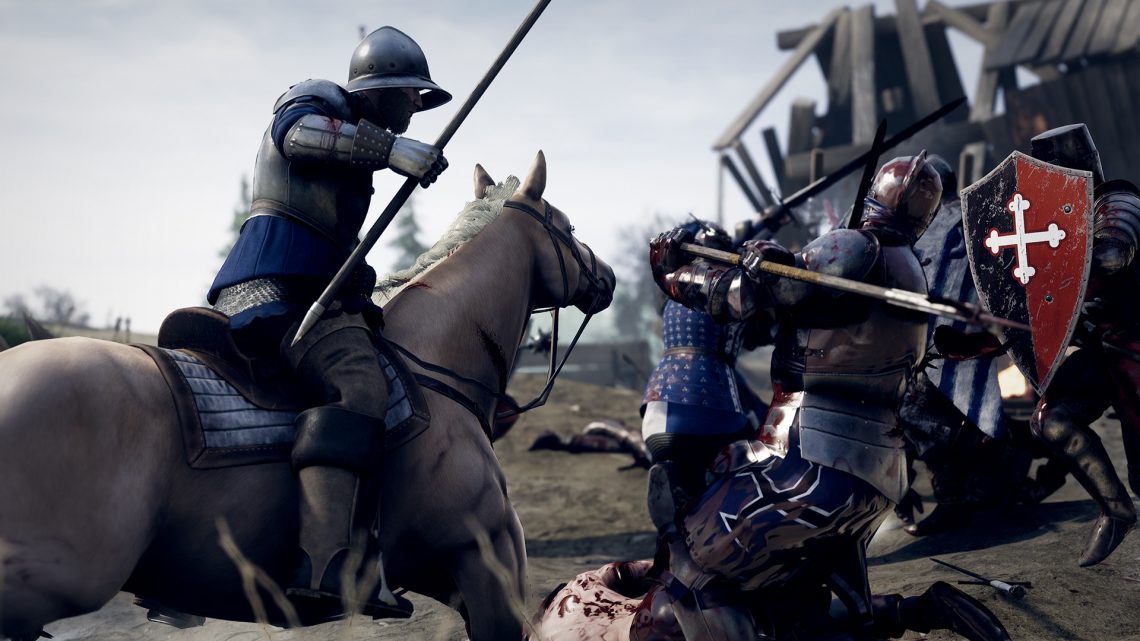 ‘Mordhau’ Is the Most Fun I’ve Ever Had Dying

Postscript is Cameron Kunzelman's weekly column about endings, apocalypses, deaths, bosses, and all sorts of other finalities.

Mordhau is a first-person shooter that replaces guns with swords. That’s the core of it: Instead of wildly firing an uzi hoping to score a lucky win, you’re wildly swinging an executioner’s sword hoping to clonk an enemy in the head with it. It is fast because you can die in one hit. It is brutal because melee fighting is, well, brutal. I am hopelessly in love with it, and my love comes from two things that are equally true: melee combat is thrilling, and I know I’m never going to get much better at it.

I’m talking, of course, about the battle royale mode of Mordhau, which asks you to do all of this in an ever-shrinking circle with other people who have practiced the art of swords. In many ways, this feels inevitable. If battle royale is going to worm its way into every genre, then we might as well have medieval combat happening. Small maps, with limited ranged weapons and a maximal number of melee implements, from shovels to scythes to broadswords, feels inevitable.

Like all other competitive games, Mordhau demands certain literacies. Starcraft II asks you to properly read your scout, and Apex Legends demands that you recognize the blood-red damage readout of the shieldless combatant. Of course the skills necessary to master Mordhau require dozens of hours to build on to even become proficient at the game. Learning to “read” a morningstar attack is different from reading a short sword swipe. You need to see the angle, think through the direction, time your block at the right time, and make sure your counterattack is cracking at the head the exact right way. Anything else is going to play out as a quick trick to re-queuing for a new match. 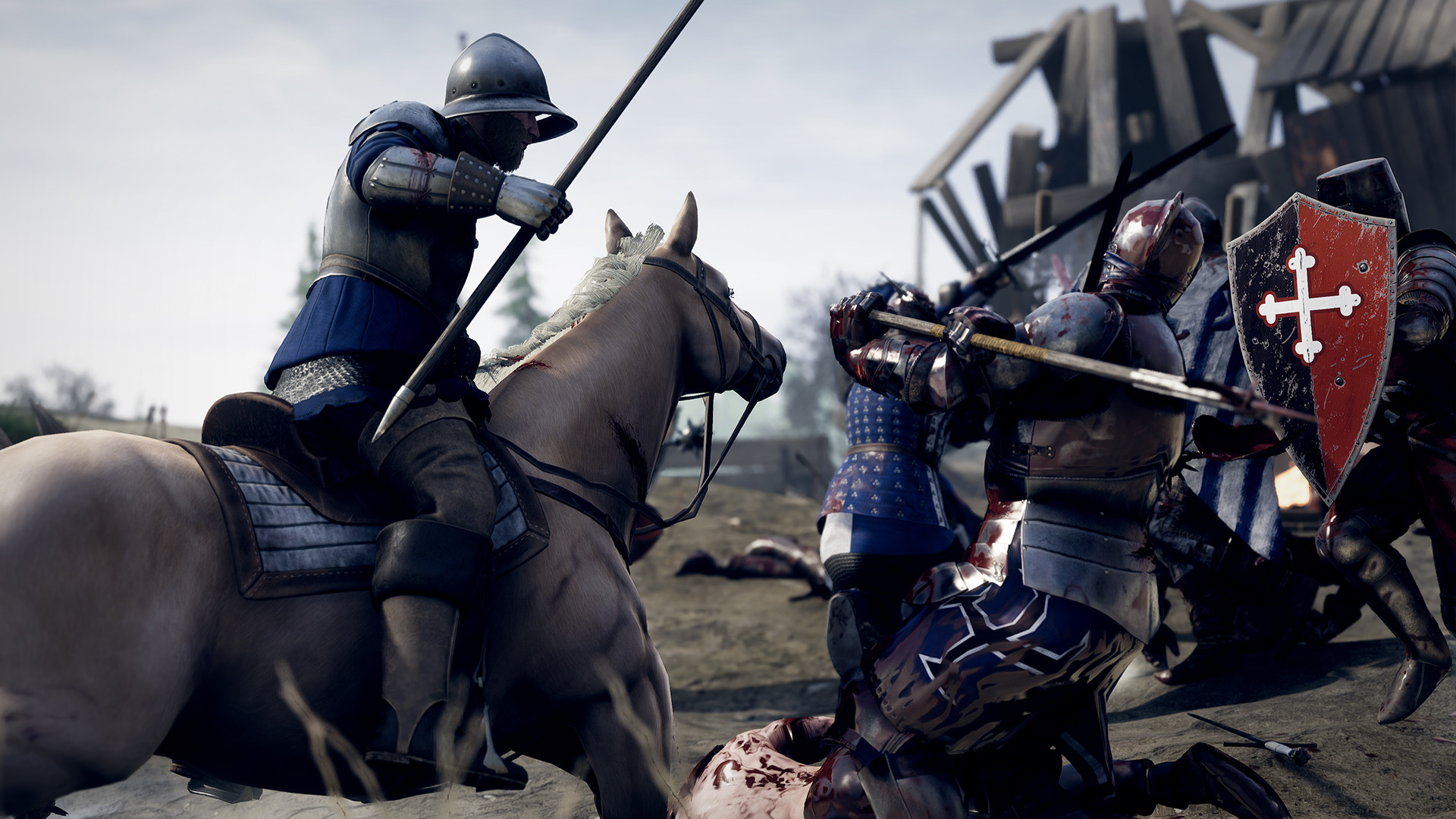 This new mode of consideration, which feels like it owes as much to fighting games as it does to the lineage of shooters, is an acceleration of the battle royale genre. It eats everything it comes into contact with. It creates new forms of demands on the player whenever the meritocratic progress to first place, the chickenest of dinners, can be presented. And it transforms the combat, which could just be about reading moves and executing swings, into a contest of wills in the march toward the top of the pile.

There’s no denying that it’s exciting. Swordplay involves swinging, blocking, and moving. And theoretically there’s a universe where someone can become good enough at reading the plays of their enemies that they can whip their directional block and prevent a giant flamberge from slicing their head off. That universe is not the one that I live in. I’m always learning, but timing swings and managing angles and knowing when to stab or kick an opponent is incredibly hard.

I don’t just mean that it’s difficult to decide what to do or which tactic would be successful. It’s hard just to input these movements. Now that I’ve been writing about playing and writing about battle royale games for more than two years, I think I can confidently say that this is part and parcel with the formula that makes for one. Part of the promise of the genre is the thrill of overcoming the interface.

When you and I are facing each other from hundreds of meters away with 8x scopes and Kar98 rifles in PlayerUnknown’s Battlegrounds, we’re fighting each other. But we’re also fighting the bullet drop, the movement controls, the recoil, and all of the other things that we need to develop skills with in order to actually make this fight happen. When online competitive communities talk about skill ceilings, or the capacity that a game has to become adapted to in order to have deep competitive play at a high level, what they’re talking about is their ability to manipulate and understand those interfaces in a complex way. In the meritocratic story of games, given equal access and ability to play, then whoever puts the most practice in is going to win that fight.

But we know that an equal playing field isn’t a given. There are players whose reaction time isn’t as fast. There are players working on extremely long pings due to their location. There are players with one hand making use of several different devices to operate the game. Some players simply need more wide-ranging solutions for a variety of ways that current software and hardware does not account for them. And others just will not, no matter how much practice they put into the game, ever get better at manipulating the interface to make it do what they want.

There’s something special about a game that seems to understand that many of its players will never become sword-fighting aces. This is a battle royale game, perhaps the first one, that gives me the impression that is knows it is making for failed connections with some people. I don’t get the feeling that I could always block the finisher that lops my head off or defend myself from the arrows whizzing by my head. After all, if there’s a singular emotion associated with the battle royale genre, it has to be disappointment. Disappointment that you didn’t make it to the end. Disappointment you failed to land the shot. 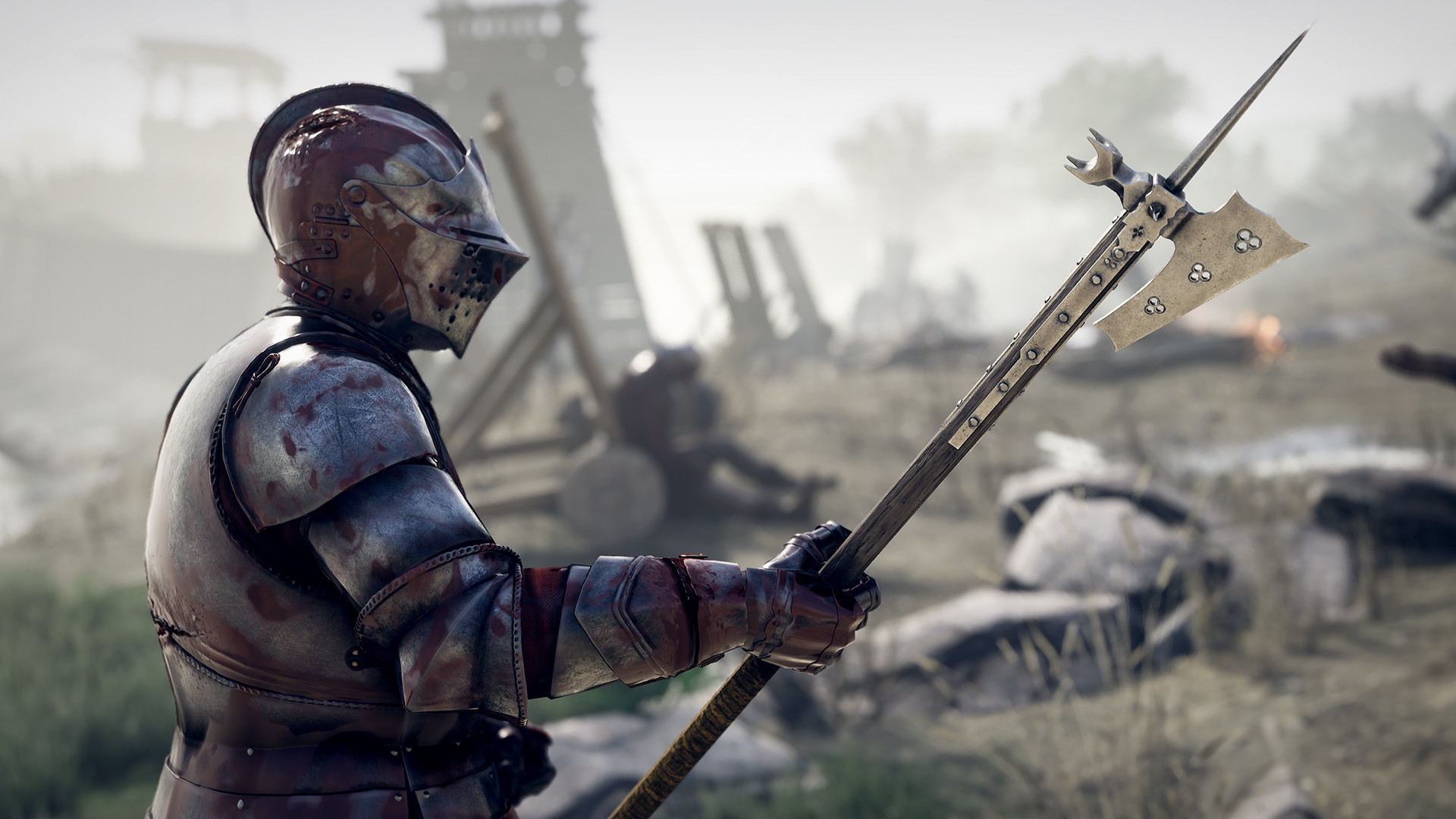 I think the core mechanics of the battle royale are popular because they combine the promise of skill building with the surprise of good loot, the good drop, the lucky shot, and all of those other things that make for the intangible, unpredictable drama that happens so often in these games. But Mordhau’s battle royale mode gives me that drama without the disappointment. When people are holding down the “scream” button and charging at me, I find myself laughing. In a similar situation in Apex or PUBG, I’m going to be sweating and cursing.

I’m not going to put a hundred hours into this game. I am going to play it for a few dozen before something else comes along. And unlike those other battle royale games I’ve mentioned, where I have put in the hours to win every now and again, I don’t have the drive to do that with Mordhau. I don’t have to win to get the short thrill of melee combat. I don’t have to win to get the comedy of watching others, and myself, trying desperately to clonk each other with a big sword. In taking the battle royale so far into the realm of demanding, intricate action, it has revealed to me that I’m never going to dig that deep into a system. And so all that’s left for me is the joy of losing.

I have rarely found such joy in being taken out in the way that Mordhau does it.

My experience of Mordhau, then, isn’t one that’s predicated on the hope for a happy ending where I become good as hell at killing other players with a rake. My experience is that I am choosing a game that I have a good time losing at. And Mordhau is a great game to lose. In the past I have written about the skill plateau that I experienced with Overwatch and the grim feeling of knowing that I am never, ever going to get beyond that plateau. I will lose the same kinds of games while escorting the same payloads and getting ult’ed into eternity.

It seems like there is always going to be a thrill in the micro game of swordplay here, the same kind of fascinating display that you might seen in a fight between two marines and four zerglings in a high-level game of Starcraft II. There is a freshness to dying here. There is a pleasure in getting your head lopped off. Someone sweeping to my right and catching me with the very tail of their scythe swing is thrilling, and when I die to that I experience it like I would a clip on America’s Funniest Home Videos. “I got my ass kicked again,” I laugh.

This isn’t a normal feeling for a game to give me. I’m fine with losing at a game, sometimes for long periods of time, because that’s just how games are. Someone wins and someone loses. But I have rarely found such joy in being taken out in the way that Mordhau does it. When someone is thunking me in the head with rocks as they charge and scream at me, I’m not really thinking about how I’m going to handle their broken sword attack. I’m thinking “what the hell is this?!”

There’s a pleasure in solving the little puzzles in Mordhau that has nothing to do with winning the game, and that’s something special in the battle royale space. In PUBG, I want to land the sniper shot so I can get that dinner. In Mordhau, I just want to get that sickle swing to hit. Whatever comes after doesn’t matter all that much. It was the moment that gave me joy. And now my head has been thwacked from my joyful body.

Though the game does offer more traditional team-based deathmatch and objective modes, it’s Mordhau’s battle royale that I love. In first- or third-person mode, you begin the game with nothing and have to scramble around a small, ever-shrinking map to find your loot. Unlike the AKM of PUBG or the Mozambique of Apex Legends, however, Mordhau gives you an extensive number of melee weapons and a few ranged weapons like bows, crossbows, and hand axes. You’re not looking for the Kar98 here. You’re looking for the longbow or the rapier. And then you’re going toe-to-toe, screaming, at your enemies in some of the weirdest fights I’ve ever experienced in a video game.

Anti-vaxxers Stole ‘My Body, My Choice’ from the Abortion Movement