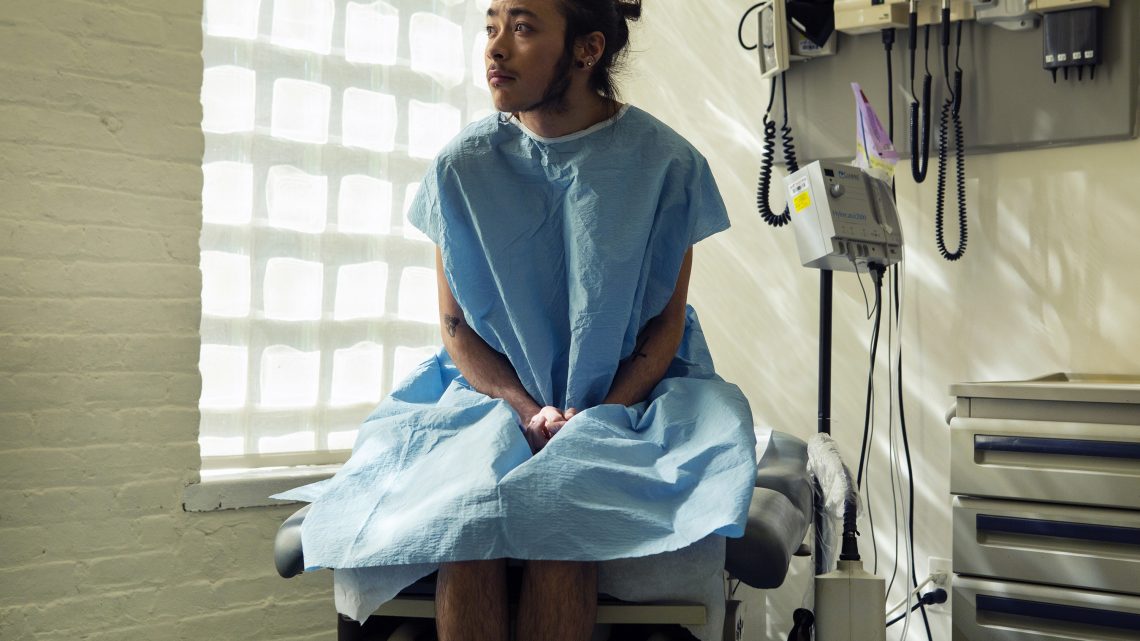 On Friday morning, the Department of Health and Humans Services proposed a new rule that would remove anti-discrimination protections for transgender Americans from the Affordable Care Act, asserting that discrimination on the basis of sex should not include gender identity. The department’s policy revision alters Section 1557 of the Affordable Care Act, which granted transgender people federal protections from discrimination by federally funded healthcare providers and insurers.

In a press release Friday morning, the HHS said this move continues its mission to “vigorously enforce prohibitions of discrimination.” In a phone call with media outlets following the announcement, HHS office of civil rights director (OCR) Roger Severino brushed aside questions about how his office would ensure trans Americans have access to necessary medical care. “This rule does not go in and tell people how to practice medicine,” Severino said, adding that ridding the ACA of gender identity protections actually furthers the mandate of HHS because the original understanding of sex as written in Title IX was never meant to include gender identity. “We are going back to the plain meaning of those terms, which is based on biological sex,” Severino said.

Though Severino claims that the HHS proposed rule is in line with his office’s obligation to prevent discrimination in medicine, he admitted that federal law would no longer support legal arguments of discrimination on the basis of gender identity in federally funded health care facilities. Severino argued that this change should not be a burden on trans Americans, as it does not forbid any medical provider from offering transgender people gender-related care. “We believe in the inherent human dignity of all people,” Severino said. “HHS is here to make sure that access to healthcare is available for everyone, that’s part of our mission, to ensure that the health and well-being of all Americans is furthered, and that is not changed by this rule.”

Others disagree. “The mission of HHS has historically been to expand access to health and social services,” said Jocelyn Samuels, who served as the director of the office for civil rights at HHS from 2014 to 2017. She described a stark transformation in the mission of her former office since she departed. Severino was appointed by President Trump to replace Samuels in March of 2017, shortly after President Donald Trump's inauguration. The appointment was alarming to LGBTQ advocates, given Severino's history of opposing LGBT rights as a veteran of the far right Christian group The Heritage Foundation. Severino has been deemed a “radical anti-LGBTQ-rights activist” by the Human Rights Campaign, and entered HHS as an outspoken opponent to Section 1557 of the ACA, having written that it forces Americans into “pledging allegiance to a radical new gender ideology.” In the same article, Severino referred to transgender women as “biological men.”

According to Samuels, the proposed rule change shows that Severino’s office “is more focused on defending denials of health care and limiting the scope of non-discrimination protections than in ensuring access to health care for vulnerable communities that face discrimination and artificial barriers to medical services.”

Severino justified the Department’s revision by referencing two injunctions against it in Texas and North Dakota; he argued that this policy proposal merely codifies the understandings of sex that were given by the active injunctions against Section 1557, remaining consistent with the interpretation of sex that “had reigned for decades,” before 2016. “We are bound to respect the text of the laws that Congress has entrusted us for enforcement, and that is what this rule will do,” Severino said.

In a press release issued Friday, the National Center for Transgender Equality refuted the HHS position that this policy would uphold court precedent, or the country’s status quo, stating that undoing Section 1557 contradicts federal law, “and two decades of court rulings.”

The HHS announcement comes just days after the Department of Housing and Urban Development released a proposed policy revision that would enable homeless shelters to legally turn away transgender people seeking accommodation, despite the fact that transgender Americans experience homelessness at a rate 2.5 times higher than the general population. NCTE called the HHS move an “escalation of dangerous attacks,” by the Trump administration against trans Americans.

Data collected by NCTE shows how badly trans Americans needed protections under the ACA. In 2015, one year before Section 1557 went into effect, NCTE released the US Transgender Survey, which found extensive discrimination against trans Americans in health care. For instance, one in four respondents had issues with insurance, including being denied coverage for transition-related care; one in four were denied cross-sex-hormone therapy in the previous year; and more than half “who sought coverage for transition-related surgery in the past year were denied.” A third reported discrimination on the basis of being transgender in a health care setting, “such as verbal harassment, refusal of treatment, or having to teach the health care provider about transgender people to receive appropriate care.” Nearly a quarter of respondents neglected to seek medical treatment due to fear of discrimination and one third couldn’t afford to go to the doctor.

The extent of discrimination against trans people by medical providers is statistically astounding, per the same report: “more than three-quarters (78 percent) of respondents wanted hormone therapy related to gender transition, only 49 percent had ever received it.” Samuels believes that if Section 1557 is dismantled, there will be devastating consequences, citing the “pervasive and persistent discrimination to which the LGBT community has long been subjected in health care.” The proposed HHS revision “would attempt to remove any recourse under federal law to hold medical providers accountable for that discrimination.”

The issue is not concerning to Severino. “In terms of practical effect, from HHS’ perspective, [this policy] retains the current status quo,” he said. Asked if HHS would allow for a facility to refuse care to a transgender person on the basis of gender identity in an emergency room—a frequent site of discrimination for trans Americans—Severino dismissed the suggestion, stating that the HHS has not heard of any scenarios like that happening “in real life.”