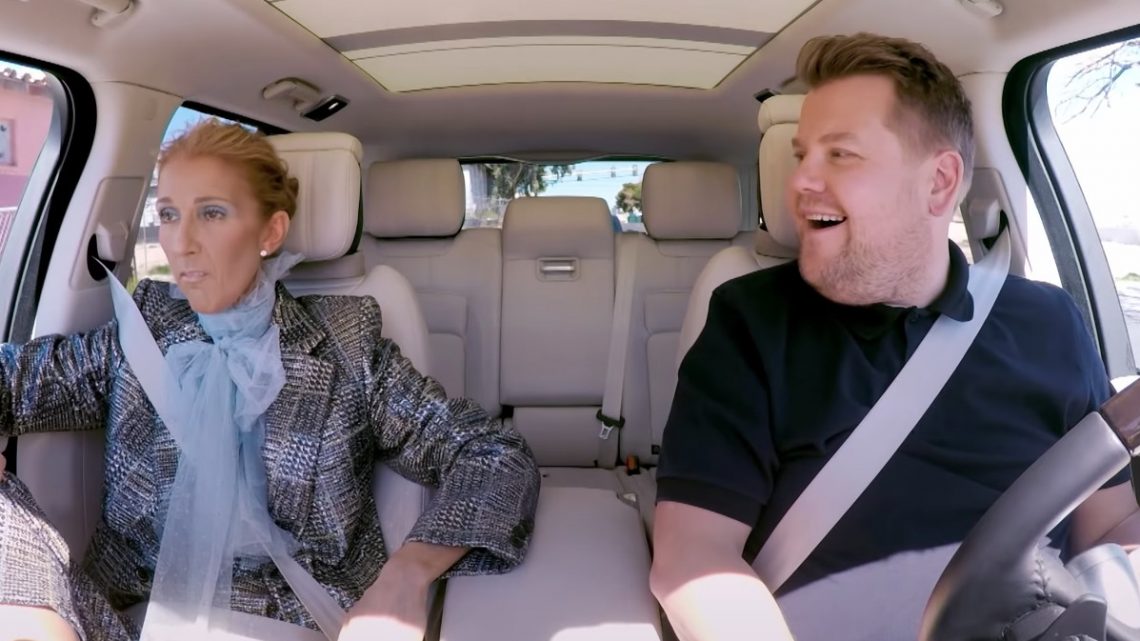 Carpool Karaoke may not be a good interview show, but it's the interview show that our society deserves. Like most other recurring late-night franchises of the modern era, it's pandering, juvenile, and faux-spontaneous, likely engineered by a marketing research firm to appeal to our basest desires like the flavor crystals in Taco Bell's Cheesy Gordita Crunch sauce.

While we all have accidentally ingested dozens of Carpool Karaoke clips through their constant presence in our content feeds, like we are all geese in a foie gras farm being force-fed James Corden's showboaty gesticulations, surely no one is actually staying up to watch The Late Late Show, its host program, in real time. (It airs on weekdays at 12:35 a.m., for Christ's sake.) Yet, Carpool Karaoke is everywhere, because it was designed to be as shareable as a Russian bot's article about AOC being a reptilian shapeshifter. It's where the celebz go to convince us that, friends, they do not deserve to be guillotined at all! They, too, ride around in the front seat of cars that are not stretch limousines from time to time, singing along to the hits just like we do when we inch along in traffic in our dented, unvacuumed Toyota Tercels. It's the 2019 equivalent of Hillary Clinton doing the Macarena at the 1996 Democratic Convention.

HOWEVER, if there is a single clip to be willingly entertained from this mind-numbing series, it's this one, from last night's installment featuring our queen Céline Dion. If you just mute all the parts where James Corden is speaking, singing, or smirking, and cover his face with your thumb on your computer screen, it's actually great.

Céline, characteristically dressed to the nines in a shiny tweed suit paired with a sky-blue scarf that appears to be half a mile long and wrapped around her neck 400 times, is so replete with charm and expressiveness that she can drown out the typically insufferable format of the show and its host. The tens of thousands of comments on the YouTube video are glowing, with many focusing on her thoroughly Dionified version of the inexplicable breakthrough smash "Baby Shark."

There are quite a few other standout moments in Céline's Carpool Karaoke: First, she breaks the format by out-diva-ing the very diva-ish James Corden right off the bat. (He's barely past his first question when she breaks into her 1998 hit "My Heart Will Go On," then proceeds to interrupt him with bursts of song over and over until he seemingly pauses to reevaluate how to continue the interview.)

Second, she visibly scoffs when Corden tries to surprise her by throwing on her 1996 epic "It's All Coming Back to Me Now." Behold, Céline's scoff face: 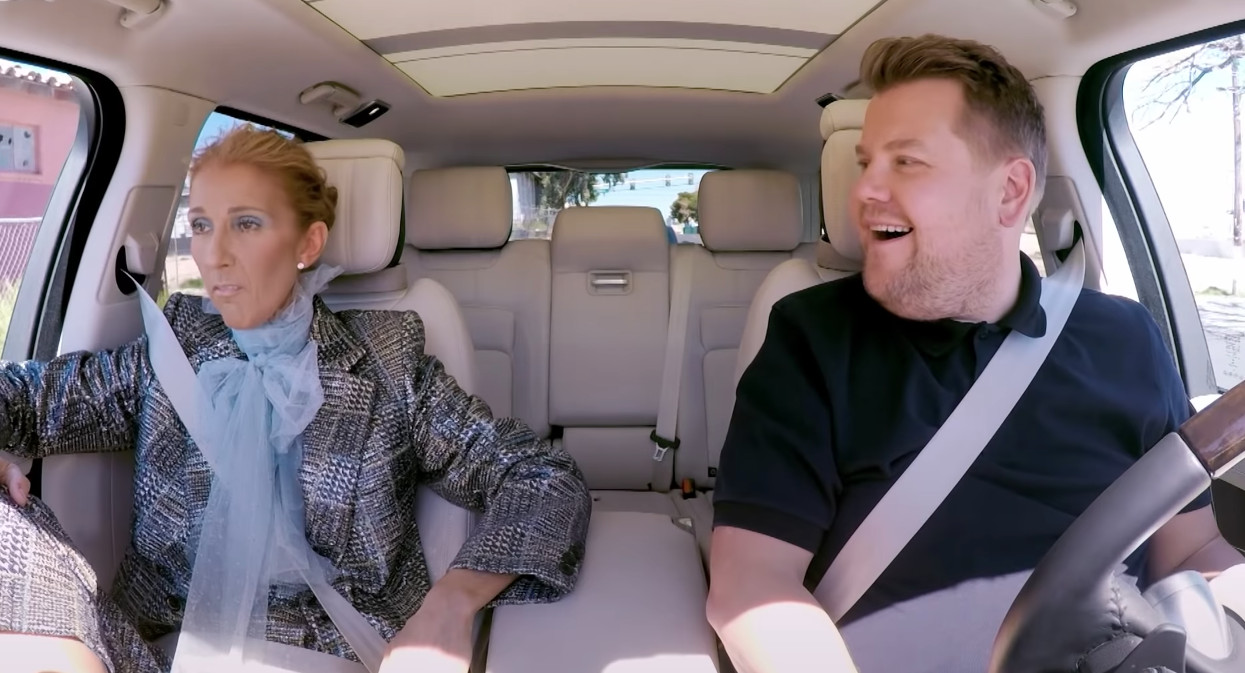 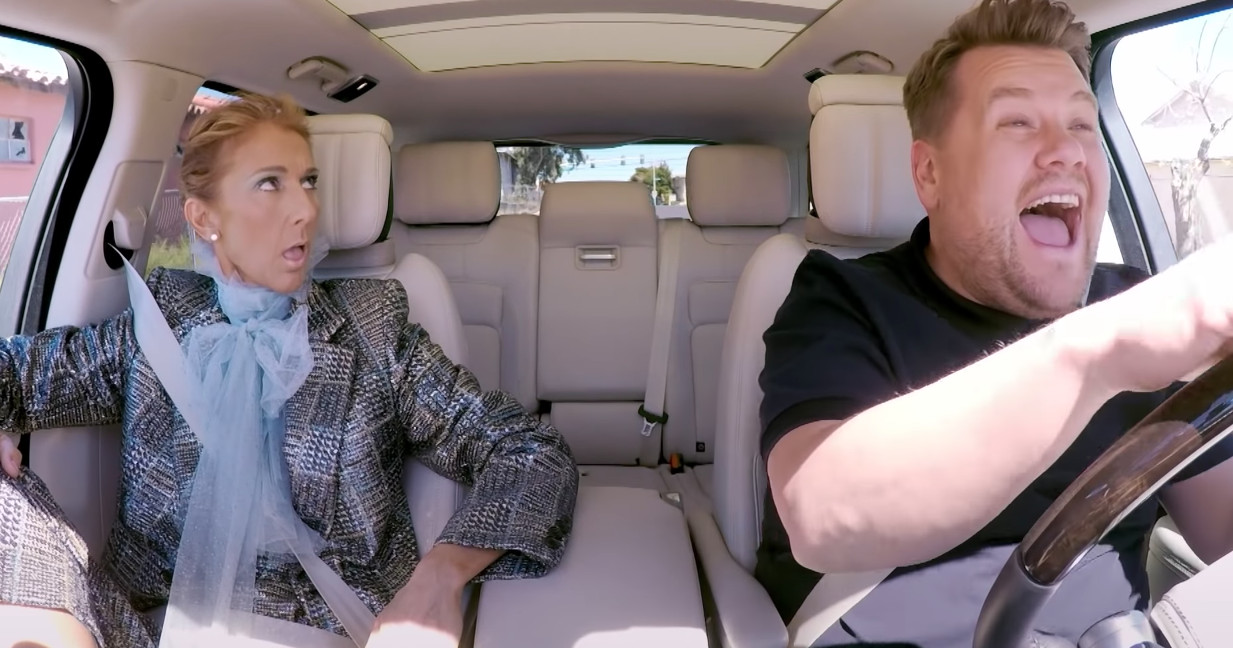 Third, she definitely drops the F-bomb at one point after either she or Corden botched the words to the "It's All Coming Back to Me" reprise. 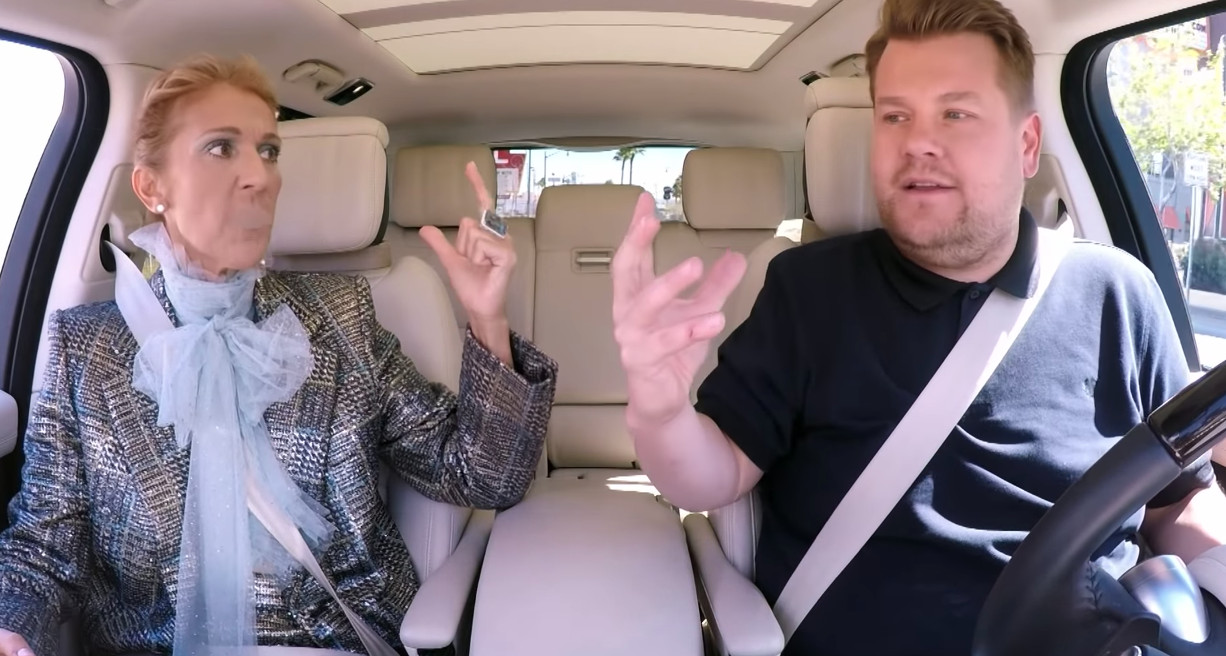 Fourth, she KISSES JAMES CORDEN ON THE LIPS??? (Might be a Quebecois thing. I heard Canadians snog without bounds.)

Fifth, she reveals that she owns somewhere between 3,000 and 10,000 pairs of shoes. (This might in fact be guillotine-worthy, but allow me to continue in my defense of Céline.)

Sixth, she says "I need alcohol" when James Corden forces her to give away several pairs of those shoes. (Relatable!!!)

Seventh, the façade of Criss Angel: MINDFREAK makes an appearance (an instant plus for any video).

Eighth, there's a really dark part where she talks about how fame sucks, and how the birth of her first child was broadcast on TV against her will before she'd even had the chance to hold her newborn infant. (Yes, she's got a bunch of shoes, but it's not all fun and Manolo Blahniks, guys!)

Ninth, to the credit of this stupid show, they somehow convinced the Bellagio to let them drift out into its iconic fountain in a tiny fake Titanic in order to reenact the video for "My Heart Will Go On." 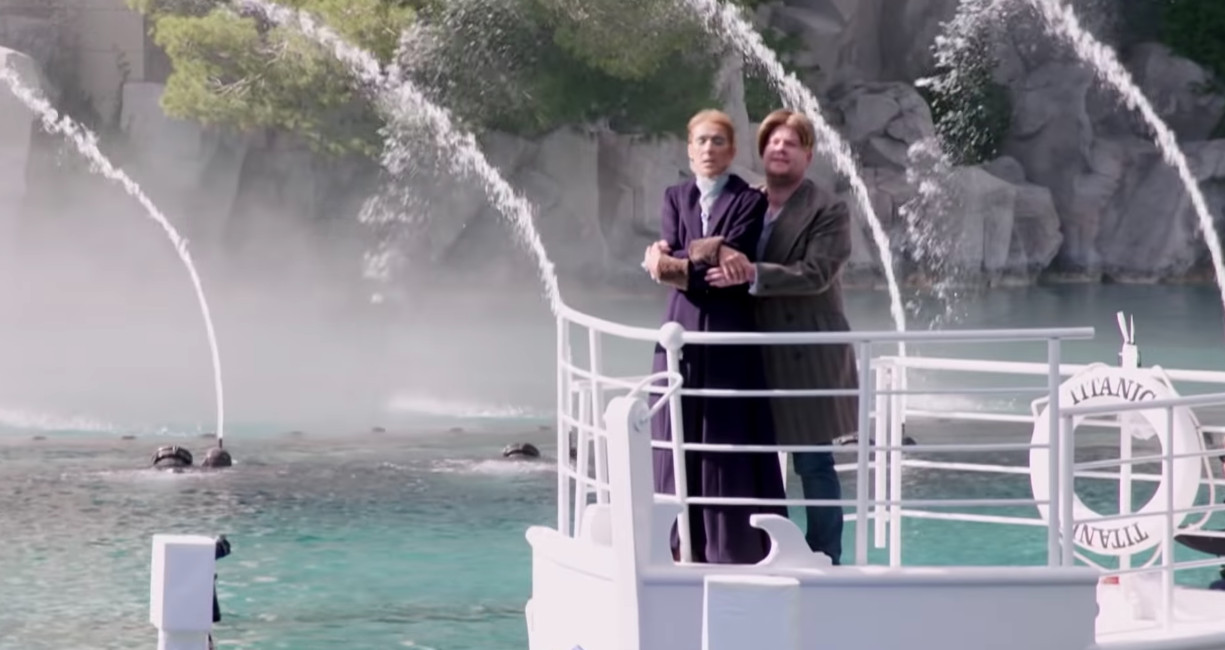 The glue of this instantly classic video is Céline Dion's uninhibited freakiness. There's something you need to know: There is reason to believe that this clip is not fanfare and fakery as far as her behavior is concerned. Despite her soaring vocal range, impeccable pantsuit game, and celebrated catalog of Extremely Serious Love Ballads Including the Titanic One, there is longstanding evidence that Céline Dion is really, actually, truly just like us! Or at least, a very rich, very Quebecois version of us when it's the end of the night, there are only three people left at the party, and everyone is rolling around on the ground, too exhausted to be socially performative, milk-drunk happy in their purest, goofiest most-stream-of-consciousness form. That is the true nature of Céline Dion. And that's to say nothing of her impeccable personal style. 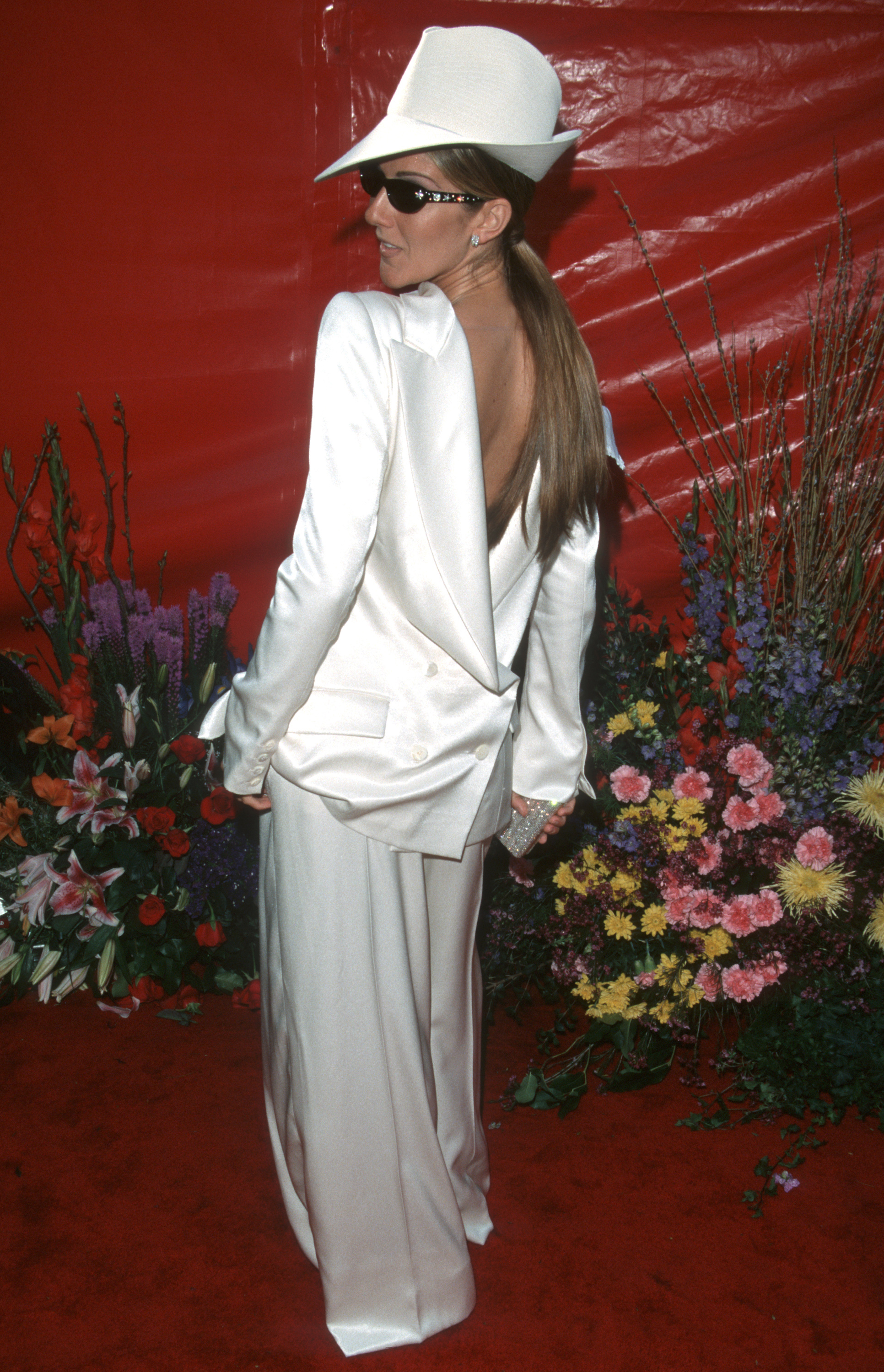 Lest we forget that Céline Dion really, actually wore a backwards pantsuit with an insanely flamboyant hat to the 1999 Academy Awards. Photo by Jim Smeal/WireImage via Getty Images

While the 1998 blockbuster Titanic and its soundtrack did wonderful things for Céline Dion's career, it did a disservice to America's understanding of her. "My Heart Will Go On"—that unfathomably popular song about watching your lover die in the freezing waters of the Atlantic due to an avoidable engineering failure, the cruelty of Billy Zane, and the carelessness of the White Star Line—was as soft-focus melodramatic as it was powerful (which is to say, very), and we saw no Céline but the lovelorn, ballad-singing Céline. 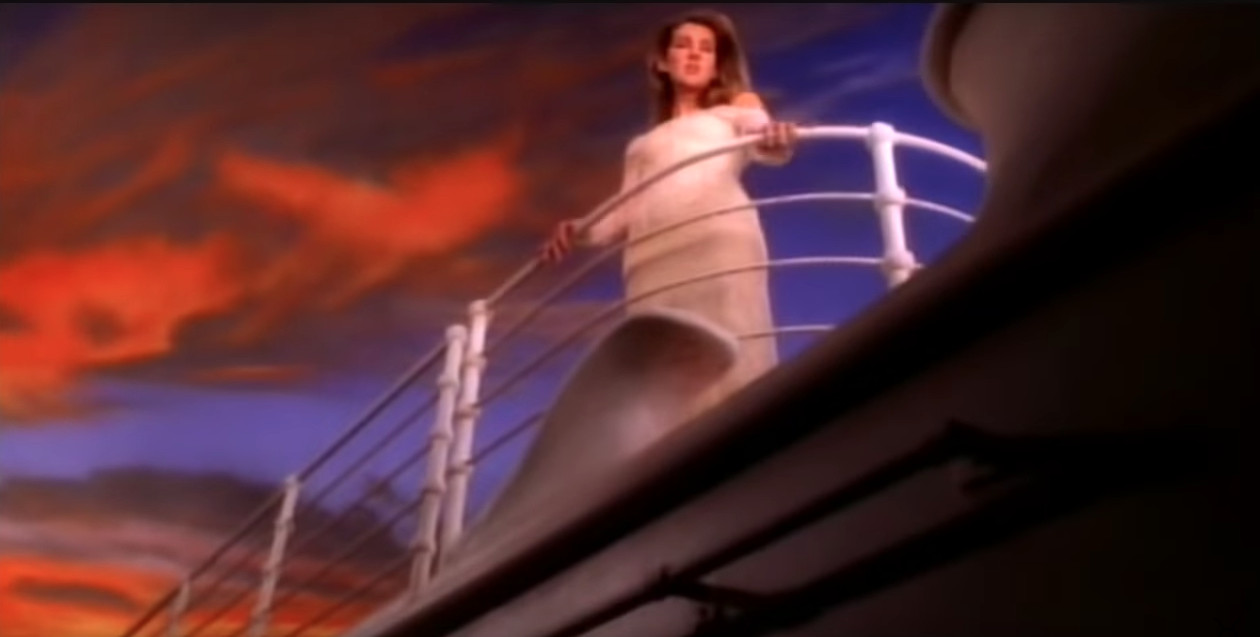 Screenshot from the music video for "My Heart Will Go On," via YouTube

As far as we knew, Céline was doomed to haunt the ruins of the Titanic for time eternal, or, if the "It's All Coming Back to Me Now" video was to be believed, spend all of her life in pseudo-Victorian garb in empty, candlelit mansions with the wind blowing the windows open, rain pouring and lightning striking outside.

For more than a decade, this was the only Céline that we saw in the public sphere. It's easy to imagine that she ate only chocolate-covered strawberries, and drank only red wine, and laid only on pristine white sofas. She thought only of lost lovers, and only opened her mouth to belt songs describing scenes from books with Fabio on the cover. If she got laid, it would only have been in romance-novel-like settings of slow, passionate lovemaking on bear skin rugs and that sort of thing. Perhaps she was appealing in a sort of "war wife" way; it was easy to imagine her dabbing your brow with a soft cloth if you were suffering from scarlet fever in the mid-19th century or something. But it was impossible to envision her doing a tequila shot, casually swearing, or laughing so hard her face turned beet-red and tiny tears streamed from the outer corners of her eyes.

All of that changed in 2008-ish, with the following YouTube video. While it has been viewed more than 1.1 million times, one must consider that that view count was spread out over a decade, and so there are still far too many people out there who don't know that Céline Dion Is Amazing.

YouTube user richfofo has not posted a video in seven years, but judging from their uploads, they seem to be a gay man with a smush-faced cat. Whoever richfofo is, they did us all a great service by compiling this montage of Céline Dion being a freaky ass bitch in dozens of different settings, effectively demonstrating the depth and versatility of her freakiness. She is both a freak who will put a terrifying fake bolt of lightning in her Vegas stage show, and a freak who will sing "Who Let the Dogs Out" while simultaneously imitating the gait of a clucking chicken. She splashes herself in the face with a bottle of water because she can't contain her self-deprecating amusement during an interview. She thrusts her pelvis wildly while wearing a gown that probably costs more than your yearly rent. She barks like a dachshund while getting her hair done. And, of course, she sings, scats, and serves facial expressions so extra that we didn't even know they were physically possible. She seems impossible to embarrass, and extremely likely to be a Genuinely Nice Person.

Our Canadian colleagues say that in Quebec, she is something of the regional godmother. Billy Eff, a culture writer at VICE Canada, describes Quebec's affection for her thusly: "One thing that I bring up a lot with friends is that she feels like an aunt, so much so that a popular nickname for her is ‘’Matante Céline’' (auntie Céline). She’s just that person from your family who you know and love and are always excited to hear about but you rarely ever get to see her."

Nick Rose, another VICE writer based in Montreal, adds, "If you’re from here, she’s like the classic Québécois woman with money in her 50s." He then added, in French, regarding the sharing of Céline's magic, "Merci de la part du peuple Canadien Français," or "Thank you from the French-Canadian people."

She's also widely respected for her wisdom. In early 2016, she lost her husband of 21 years, René Angélil, and her older brother just two days apart, both to cancer. In interviews after her loss, she spoke of her tremendous sadness, but refused to wallow in self-pity despite her series of tragedies. On her husband, she said, "He did not die in my arms. But he did die in my heart. If I hold on to this, I won't move on. There's a reason for things. I have to give myself a reason to go on." Finally, she came to know the true meaning of her 1998 hit. After she offered all of the world solace from their heartbreak, it was time for her to know its boundlessness herself. Ugh, it's just really touching.

In America, our understanding and true appreciation of Céline is still developing, as evidenced by the widespread surprise at how delightful her appearance was on Carpool Karaoke. But if you look a little bit closer at what Céline says, wears, and stands for, you'll find that she's always been the cuckoo-bananas patron saint of individuality.

In a time of extreme press-consciousness and personal brands, where personality-washing and Instagram ads for fake hair vitamins define our understanding of famous people and widens the chasm between their lives and those of everyday people, we need someone self-assured, resilient, and honestly just weird as hell like Céline Dion to inspire us to be ourselves—the only lesson we're ever really supposed to learn, and yet also the hardest one.

Did we mention that she also started a gender-neutral line of children's clothing called CELINUNUNU that a Catholic priest and exorcist called 'Satanic'?