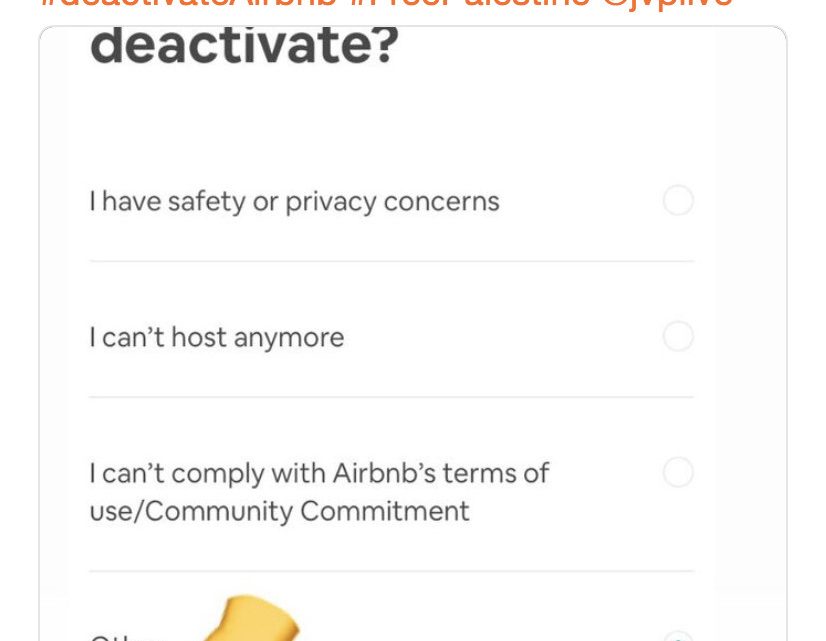 Lodging app Airbnb allows guests to book stays in cozy cabins in Alaska, villas in Indonesia, and just about everywhere in between. But in November 2018, after Palestinian officials and organizers announced their disapproval of the company’s listings inside illegal settlements in the occupied West Bank, Airbnb announced that it would no longer allow such listings inside the occupied territory. A few months later, after several suits from Israeli and American hosts and guests claiming discrimination, Airbnb reversed its decision and returned the listings to the site.

Israeli settlements inside the West Bank have been globally recognized as illegal under international law since Israel began occupying the territory in 1967.

Today, activists are urging Airbnb users to deactivate their accounts in protest of the company’s decision to continue providing a platform for tourism inside an occupied territory. May 15, Nakba Day, is the annual commemoration of The Nakba, when Zionist militaries forcibly displaced more than 700,000 Palestinians from their homes in 1948. (Some use the term Nakba to refer to the ongoing displacement and violence faced by Palestinians.) More than 30 groups, including the official Boycott, Divestment, Sanctions (BDS) movement and human rights organization SumOfUs have joined Jewish Voice for Peace, the group that began the callout, using the hashtag #DeactivateAirbnb.

“The ongoing Nakba means that, right now on Airbnb, Palestinians who were forced from their land and homes and illegally prevented from returning watch as tourists visit Palestinian land that Palestinians aren’t allowed to enter and rent out,” said Granate Kim, communications director at Jewish Voice for Peace. 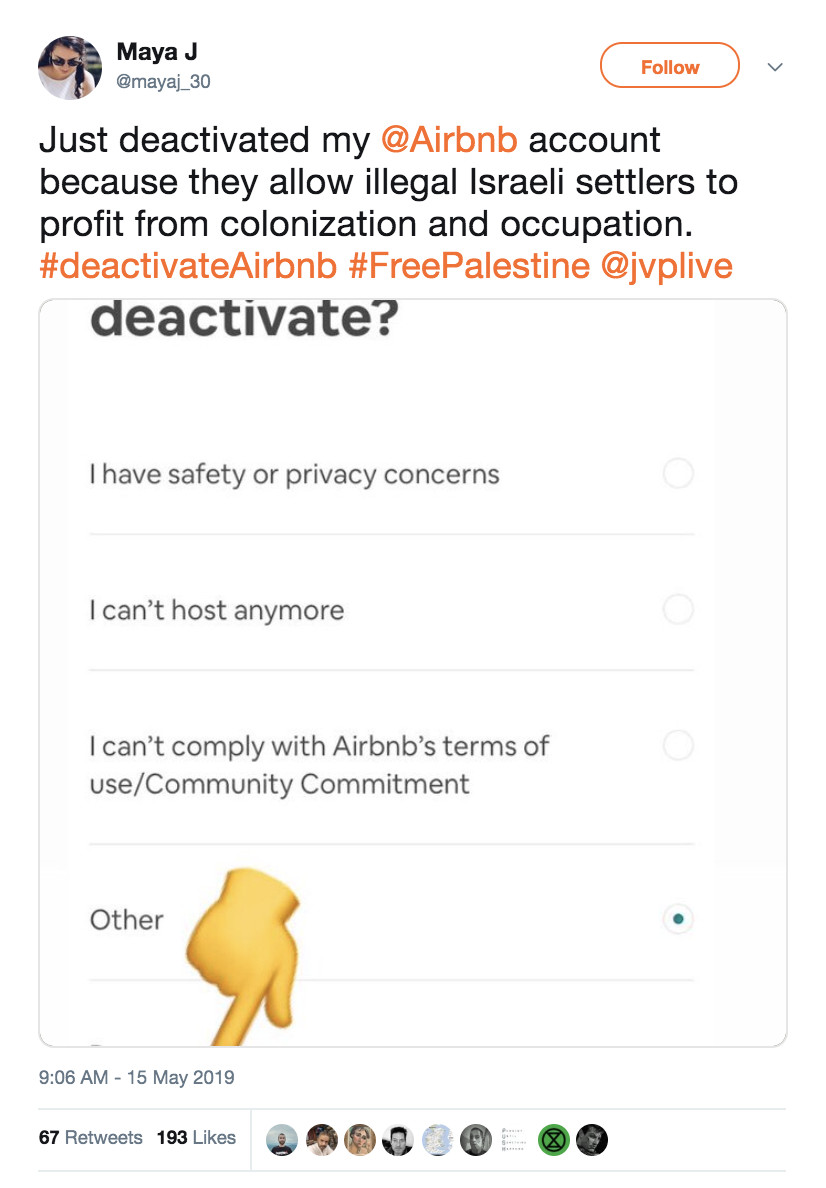 In response to a request for comment, Airbnb sent VICE an April 9 post on their website announcing that the company had settled all four lawsuits. It reads: “Airbnb will not move forward with implementing the removal of listings in the West Bank from the platform. We understand the complexity of the issue that was addressed in our previous policy announcement, and we will continue to allow listings throughout all of the West Bank, but Airbnb will take no profits from this activity in the region.” Instead, the company said profits will be donated to non-profit humanitarian aid organizations outside of Palestine and Israel. (In its April announcement, Airbnb also explicitly stated that the company does not support BDS.)

Those calling for Airbnb users to delete their accounts believe that the company’s promise to allocate profits from the settlements to generic charities is not enough to justify the listings. 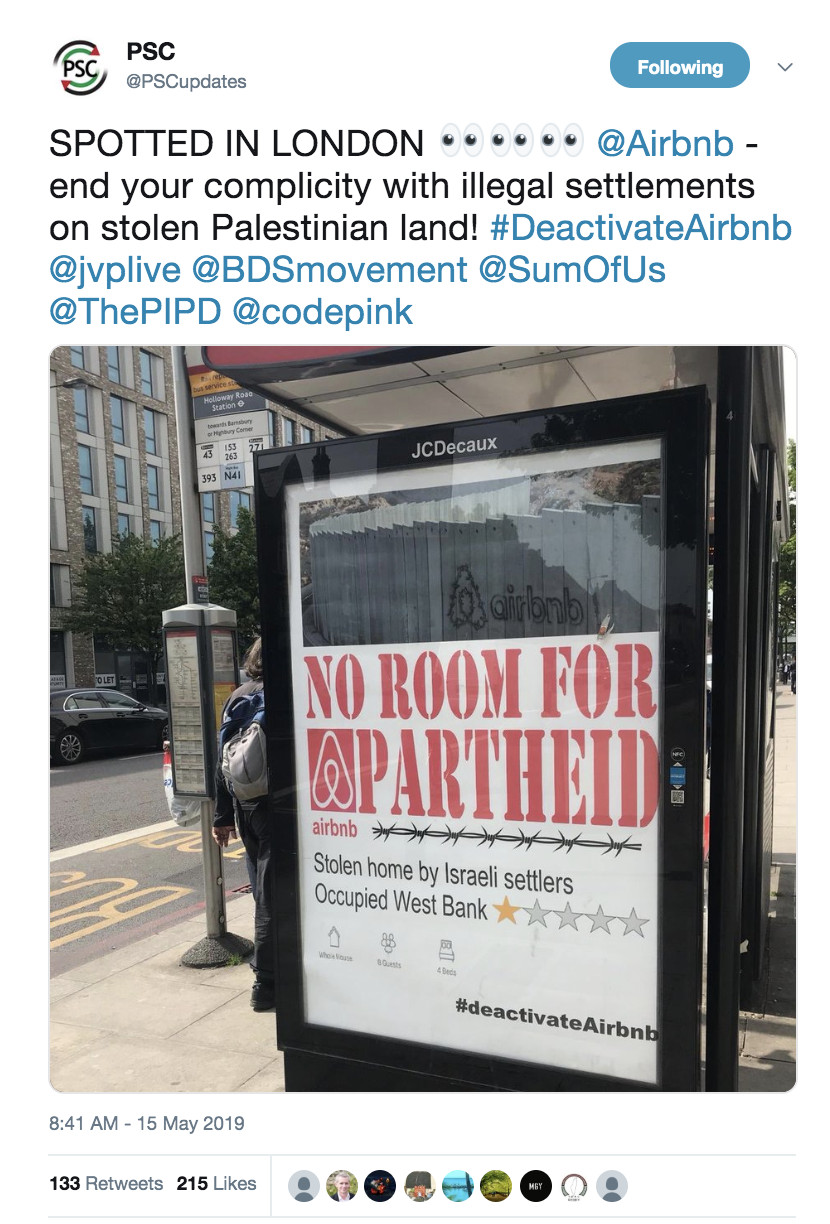 Diala Shamas is an attorney at the Center for Constitutional Rights, where she represents Palestinians whose land is listed by Israeli settlers on Airbnb. “Distributing profits generated from illegal activities does nothing to remedy the situation,” she said. “Airbnb's obligation is to refrain from supporting or being complicit in human rights violations. Far from giving it the neutrality that the company purports to seek, it contributes to and sustains illegal settlements.”

A report released by Amnesty International in January found that in recent years, the Israeli government invested large sums to develop the tourism industry through settlements. “[The government] uses the designation of certain locations as tourist sites to justify the takeover of Palestinian land and homes,” reads the report. Along with Airbnb, the report lists Booking.com, Expedia, and TripAdvisor as other companies who benefit from the occupation.