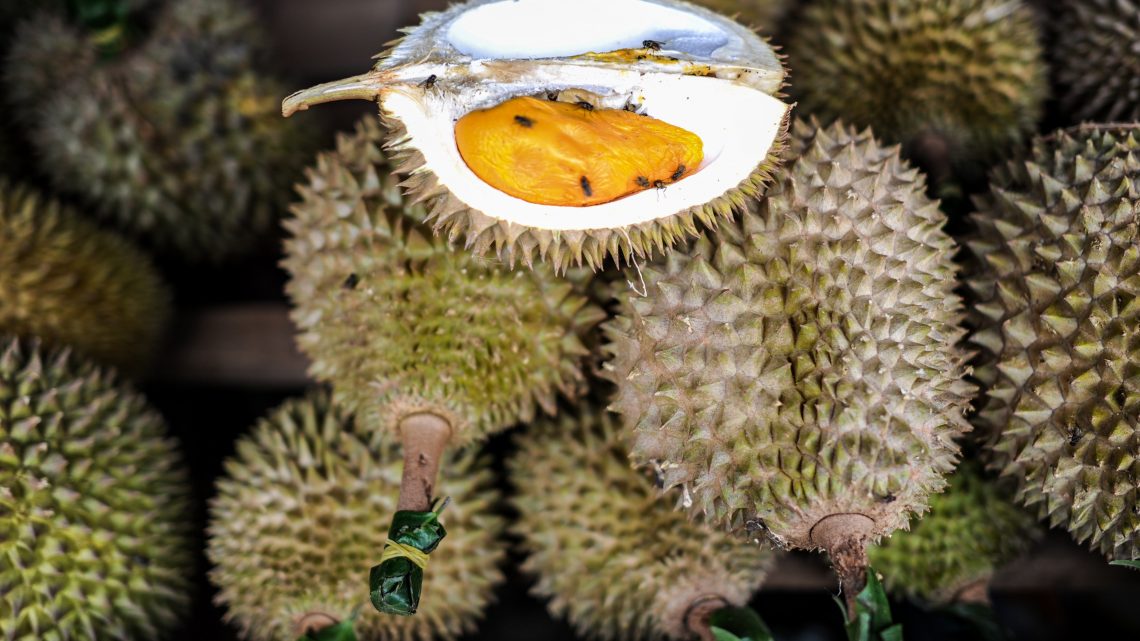 I was recently in southeast Asia, and the only thing that might’ve been more prevalent than street vendors selling fresh durian were the stickers on hotels and public buildings telling visitors that they weren’t to bring that durian inside. The notoriously pungent fruit has a smell that lingers, and in the past year, its unmistakable odor has caused the emergency evacuation of a college library and forced a flight delay after airline passengers refused to fly with two tons of it in the cargo hold.

On top of being too rank to eat on a hotel bedspread, durian could also cause you to fail a Breathalyzer test. Last month, a man in Jiangsu province in China was pulled over by police officers who believed that he was driving under the influence. He was Breathalyzed and, immediately after blowing a number that was higher than China’s ultra-harsh 0.02 percent blood alcohol limit, he started shouting that he’d just eaten durian. The cops seem to have believed him (!!!) and followed up with a blood test; when those results proved that he wasn’t drunk, he was free to go.

We’re still not sure how eating durian can make you drive so erratically that officers think you’re drunk, but it really might fuck with a Breathalyzer. According to the BBC, after that unusual traffic stop, the cops ate durian, tested themselves, and they blew almost twice the limit too. But—and this is a crucial but—when they were re-tested three minutes later, their readings were back to a totally sober zero-point-zero.

When video of the officers eating fruit and dicking around with a Breathalyzer was posted online, Chinese social media was quick to criticize the department, both for accusing the driver of being drunk in the first place, and for their possibly less-than-stellar equipment. “Do you have to waste innocent people's time, frighten them and then stick a needle in them to eliminate suspicion?" one person wrote on the Sina Weibo platform.

The Taiwanese broadcaster Public Television Service (PTS) has previously warned that eating lychee, pineapple, and other fruits that are high in sugar could cause a false positive on a Breathalyzer—but only for a few minutes. “Police say there is a clear difference in behavior after consuming alcohol or fruit and people are allowed to rinse out their mouths before taking the test,” PTS explains. “This will send blood alcohol concentration levels back to zero if fruit was the cause [...] The alcohol reaction is caused by the rapid metabolism of fruit, and drinking water will negate the reaction on breath tests. In contrast, alcohol takes much longer to metabolize and drinking water won't help.”

The difference between that kind of false positive and a real over-the-limit reading is whether the test is detecting the alcohol coming from your lungs—the ‘breath’ part of the Breathalyzer—or the “residual mouth alcohol” from durian, lychee, or even mouthwashes or breath sprays. The levels of residual mouth alcohol will drop by 75 percent within two minutes of the last bite or last swish, and by 50 percent every two minutes after that. (So instead of a blood test, those over-eager cops in China could’ve just given the guy a glass of water and kept an eye on him for a few minutes.)

Regardless, maybe some drivers should slap one of those “No Durian” stickers on their dashboards, too. Just to be safe.

Luxury Homes Sales Decline Most Since 2010 As Supply Soars

Jeff Tweedy Will Appear On ‘Curb Your Enthusiasm,’ Of Course