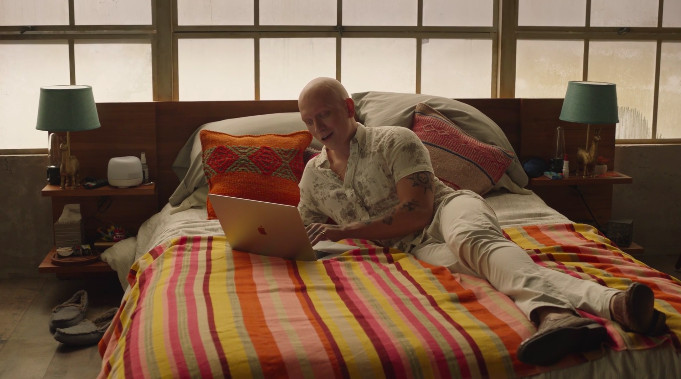 The Undeniable Appeal of NoHo Hank

It was during the premiere of the second season of Barry, the HBO show starring Bill Hader about a hitman unsuccessfully trying to give up doing hits, that I realized what was going on. Hader, playing the titular Barry, is working at Lululemon to make money while he pursues his passion for acting and his deep desire to no longer kill people. He is bickering with his coworker, when a distinctive voice interjects.

"Excuse me sir," a man in a blonde, early days Bieber wig and a purple Hawaiian shirt says, his accent somewhat undefinable. He holds up a small pair of green running shorts. "Do you have these pants in size medium?" He is NoHo Hank, and at that moment I knew. I knew the way you know about a good melon.

NoHo Hank, played by actor Anthony Carrigan, possesses a lot of characteristics that might lead one to strongly believe I should take my affections elsewhere. The first is definitely the most, if not the only, important one: he is a high-ranking member of a Chechen gang who is dismissive of the ethics of murdering people as a means of getting what you want.

But to his legions of fans, Hank is also hilarious (albeit accidentally), has a soft spot for Barry, and has fantastic dance skills. And while last season he was funny, bursting onto every scene with his perfect ~chill vibes~ attitude that seemed challenging to uphold while one spends the day organizing hits on people, this season he shows real depth, a desire for success that has long eluded him, ideally with less blood shed than in the past. So far in Season 2, we have learned that life has been extremely good since the Chechens formed their alliance with a Bolivian crew; they all live together in ostensible peace and harmony in a New Age-y stash house.

"I think this is the happiest I have probably ever been in my life," Hank writes in a letter to his family back in Chechnya, after explaining that—in an accent laced with wannabe surfer bro, that waffles in and out as someone in and out of two very different kinds of lives might—"The LA operation is going super great." We see shots of him playing volleyball with his fellow gang members, and lying around in a bed that wouldn't look out of place in a television show about hip post-college young people who have taken over some unidentified loft space as they seek to figure out the meaning of life. He is reading Thomas Friedman's 1999 book The Lexus and the Olive Tree, a book on the age of globalization that, in short, advocates nations stay at peace with one another because it's good business.

Of course, the commune is soon threatened. Hank is extremely perturbed to learn that the Bolivians want to shake things up by adding a third to their monogamous relationship: a Burmese gang. With this development, his closest attempt at a normal life while still being an active member of the family is at risk. As Barry himself has tried to veer away from his number one skill (assassinating people), and clumsily at that, so Hank has tried to move towards enlightenment, albeit slowly. The one major difference between the two "best friends" is there is far less angst in Hank's attempts than in Barry's. Episode 3 includes Hank celebratorily dancing with a man Barry has just shot, because Barry has agreed to train members of the Chechen gang so they can push out the Burmese. "50-50, with Cristobal," Hank sings to himself, the possibility of retaining his power ranking glistening in front of him like a mirage of an oasis in the desert.

NoHo Hank is dopey and hapless, like a young puppy, but also smart and pithy, and, sometimes, very scary. He has an unlikely semi-friendship with Barry—he loves him but it also seems like he will be the death of him, one day, probably at the end of the series. “I would describe Hank as a very polite, very upbeat, very optimistic, and thoughtful mobster. He’s going to do his best to fulfill his life of organized crime while also making friends, and maybe [doing] some people-pleasing along the way," Carrigan told Vanity Fair last year. And to the New York Post this week: “I would describe Hank as a Chechen mobster with a heart of gold. He’s someone who came from Chechnya and really ‘feels’ Los Angeles and really wants to acclimate. He’s trying desperately to blend in with the crowd, which is not going to happen."

Carrigan's comedic timing has been noted many times since the show first aired last year. Earlier this week, while watching the third episode of this season (when the dancing occurs), I wrote on Instagram of Hank, "I love him, He's perfect." The response from my friends was rabid. "This scene is magic in that I am in awe of it and don't understand how it possibly happened #NohoHankHive" a friend wrote. "I loooove him" a few said, echoing my feelings exactly. "The fucking best," responded another. One simply sent heart emojis—the kind where the heart has an arrow through it—and three exclamation points. 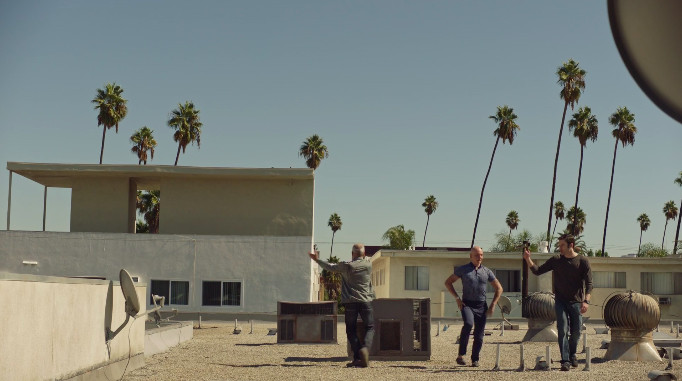 The responses to a similar comment on Twitter about Hank being my new celebrity crush were the same. "J'adore"; "sparks joy"; "I'm obsessed" were some sentiments shared. Human sexual impulses being the mystery that they are, I cannot assume all feel the full attraction towards the character that I do, but since Barry first aired, Carrigan has consistently been considered a highly important part of its strong ensemble cast, award nominations (and wins), and overall positive press reception.

Attraction to Hank might be considered odd, largely in part (outside of the murdering) because of his stereotypically "evil" look—the tattoos, and hairlessness, specifically, but also his slightly tweaked fashion choices, a favoritism towards slides and loafers in particular. Carrigan has repeatedly spoken about how he suffers from alopecia, which causes hair loss, and it is the obvious driver behind his distinctive vibe. It was also a large part of why he thought he might have to stop acting entirely, as he's shared movingly several times. (Bald men are hot, but Hollywood and the world at large seem to avoid that fact, even now.)

As such, the combination of his physical presentation and literal choices could have easily shoved Hank in with a long history of Bad, Reasonably Attractive but Nothing Special Men on television who were turned by their audiences into likable sex symbols. See the commonly cited Tony Soprano, or Walter White, or even Barry himself. As Hader has explained, after an early screening of the show, a viewer said they found Barry's self-involved actor girlfriend Sally to be "kind of irredeemable." Emily Heller, a writer on the show, shot back, "Barry’s a murderer! Barry kills people, but she’s unlikable because she’s ambitious!?” The moment was so telling of the tropes we find ourselves falling into that Hader expanded on this moment in a recent profile in The New Yorker as well:

The show strives to undercut Hader’s charisma. Whereas “Killing Eve,” the BBC America show about a hit woman, treats each murder as a Baroque opera, “Barry” ’s murders have all the glamour of security-camera footage. “I feel complicit in the violence of the show,” Hader said. “So it needs to be treated very carefully, not glorified. When Barry strangles Paco, I said, ‘There should be kid toys everywhere, because Barry should know: this kid’s not going to have a dad anymore.’ ” He acknowledged, however, that he was “shocked by how many people like Barry. Because it’s not ‘He kills people, but he’s really just like you and me.’ Barry is a murderer. His truth is super fucking sad and ugly. But people see me and think, Oh, it’s that funny guy!” After a screening of the show on the Sony lot last year, a male agent said, “I find Sally a little unlikable.” One of the show’s female writers fired back, “Yeah, but Barry fucking kills people.”

But Hank is not appealing once you set aside or outright ignore his murderous tendencies, as audiences have willingly done with Soprano, or White, and now Barry; he is appealing because of them. Which is also not to say he is appealing because he is a murderer! But instead, because he seems to accept and be completely forthright about all of his qualities, good and bad. Hank is proud of himself for being good at something (organized gang violence and thievery), and sees that skill as one worth being impressed with. He does not oscillate back and forth, spewing emotional wreckage in his wake, like Tony Soprano. He does not wrack himself with constant guilt like Barry. He does not linger over the morality of his choices, nor his ostensibly less than traditional leading man looks. He is clear. He is funny. While Barry wraps himself into knots over his choices, Hank is coming to his realizations with less pain, and in that, suggests to the viewing audience that self-actualization does not always have to be the protracted, exhausting process we know it to be. It can even be funny. Is that messaging realistic? Perhaps not. Does it make it easier for us to sympathize with and like Barry over Hank, and, therefore, make Hank seem like more of a monster, less of a considerate human, by contrast? Absolutely.

But there is no inherent morality in showing remorse for your horrible actions if you repeatedly do little to actually stop or repent for them. Hank might be following his own flawed compass, but in many ways, he is behaving more consistently than Barry, and as such, is much less the tired flawed male anti-hero we have grown accustomed to fawning over. You can watch Hank and love him, and never for a second delude yourself into thinking he's a good person because he just wishes he could give up the bad.

There is a scene this season where Barry, grappling with his choices, tries to get real with Hank, or, depending on how you look at it, tries to absolve himself. "Am I evil?" Barry asks, his voice dropping, tender, sensitive. "Am I like, an evil person?"

"Oh my god! Absolutely! Do I not tell you that enough? You are like, the most evil guy I know man," Hank responds, effusively, ever the supportive friend missing the mark as he tries to do the right thing.

“I have certain ideas, for sure,” Carrigan told Vanity Fair, of the roles he'd like to play next. “Maybe surprising people by playing the romantic lead, or playing a character that’s very unexpected.” Bro: I look forward to it, but it won't be unexpected. At least not to me.